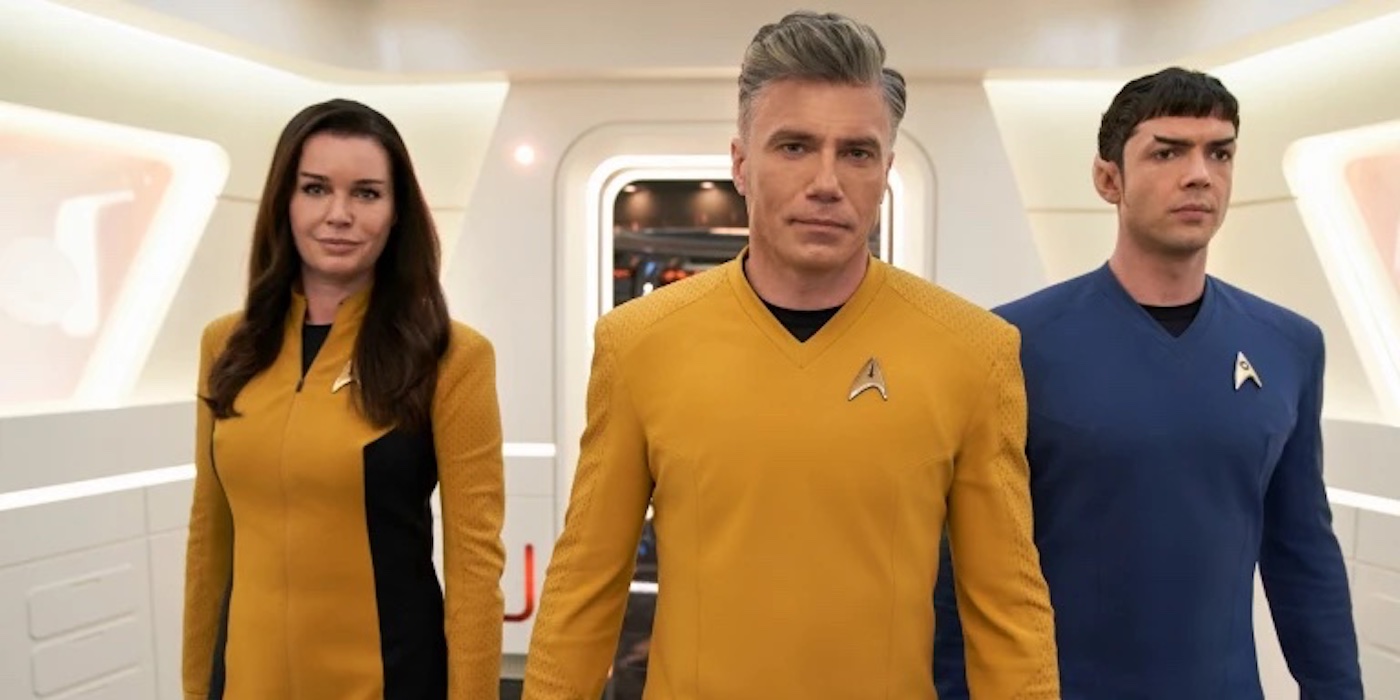 Star Trek: Strange New Worlds comes in hot with the best Trek pilot since Deep Space Nine‘s “Emissary”. What makes the return of the Enterprise so worthwhile? Let’s talk about what works, what’s rough around the edges, and what this premiere promises for the future.

Previously on Strange New Worlds… nothing! This is the pilot. However, previously on Star Trek: Discovery season 2, a couple of things happen which remain relevant. For one thing, Christopher Pike sees his future on the Klingon planet of Boreth. Pike will melt during a training exercise and will be relegated to total immobility for the rest of his life after that. 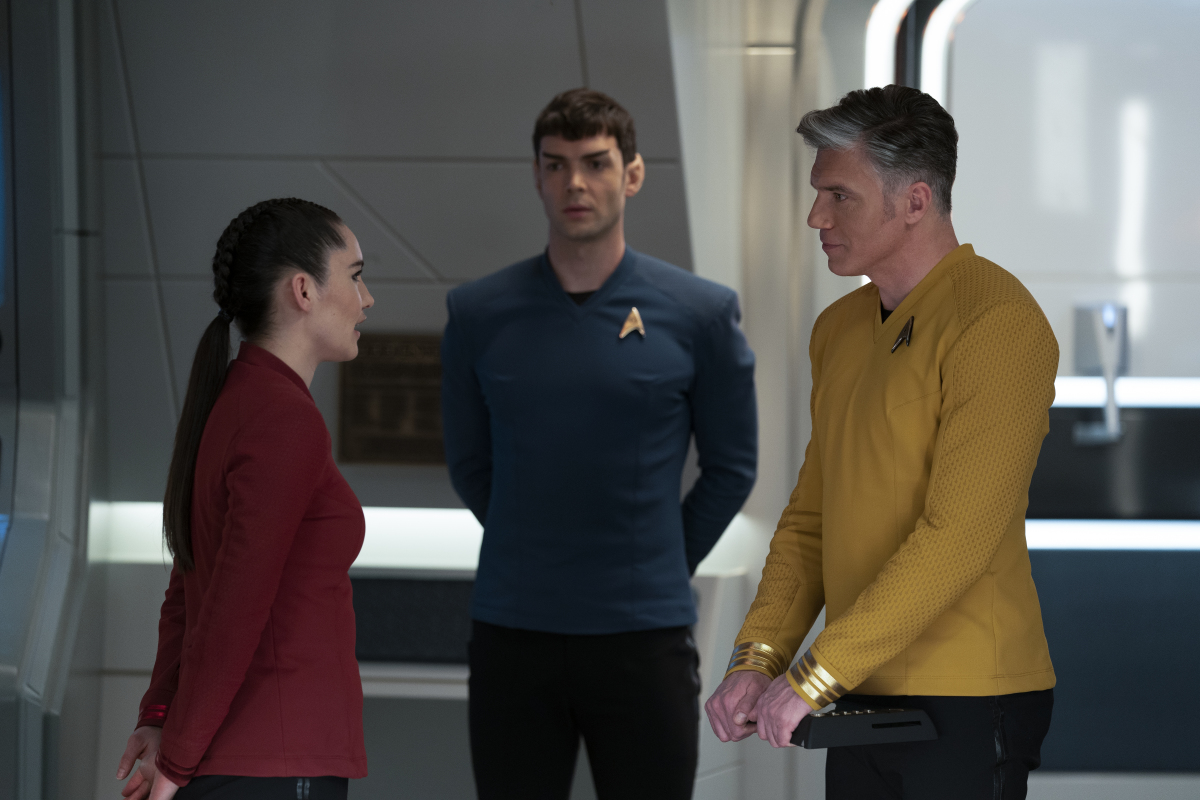 In the wake of the events of DISCO season 2 and as we begins Star Trek: Strange New Worlds, the NCC-1701 Enterprise is in space dock for repairs. At the same time, three things are happening. Pike is on Earth avoiding responsibility by having a healthy, casual relationship with a fellow captain. Spock is getting proposed to by his now fiancé T’Pring. And Una Chin-Riley is on the USS Archer making first contact with a planet called Kiley 279.

Of course, not all is as it seems. Pike isn’t having healthy rolls in the hay so much as he’s avoiding his inevitable demise while growing a heckin’ stringy beard. Spock is excited about marriage but he is also a little too keen to get back on the Enterprise. And Una’s first contact? Yeah, her team has vanished. As a result Admiral Robert April orders an uncertain Pike back into active service to track down Una and figure out what happened.

With Una out of the picture, Pike takes on a new first officer in the form of La’an Noonien-Singh – and it’s a good thing she’s there. Upon arriving to Kiley 279 the Enterprise discovers an abandoned USS Archer. And as a warp signature is detected without any actual engine, La’an advises shields be raised. Moments later, the planet fires plasma torpedoes – a technology Pike insists is not on the same level as warp technology. Spock reveals that  the people of Kiley 279 have not created a warp drive, but they have created a warp bomb. 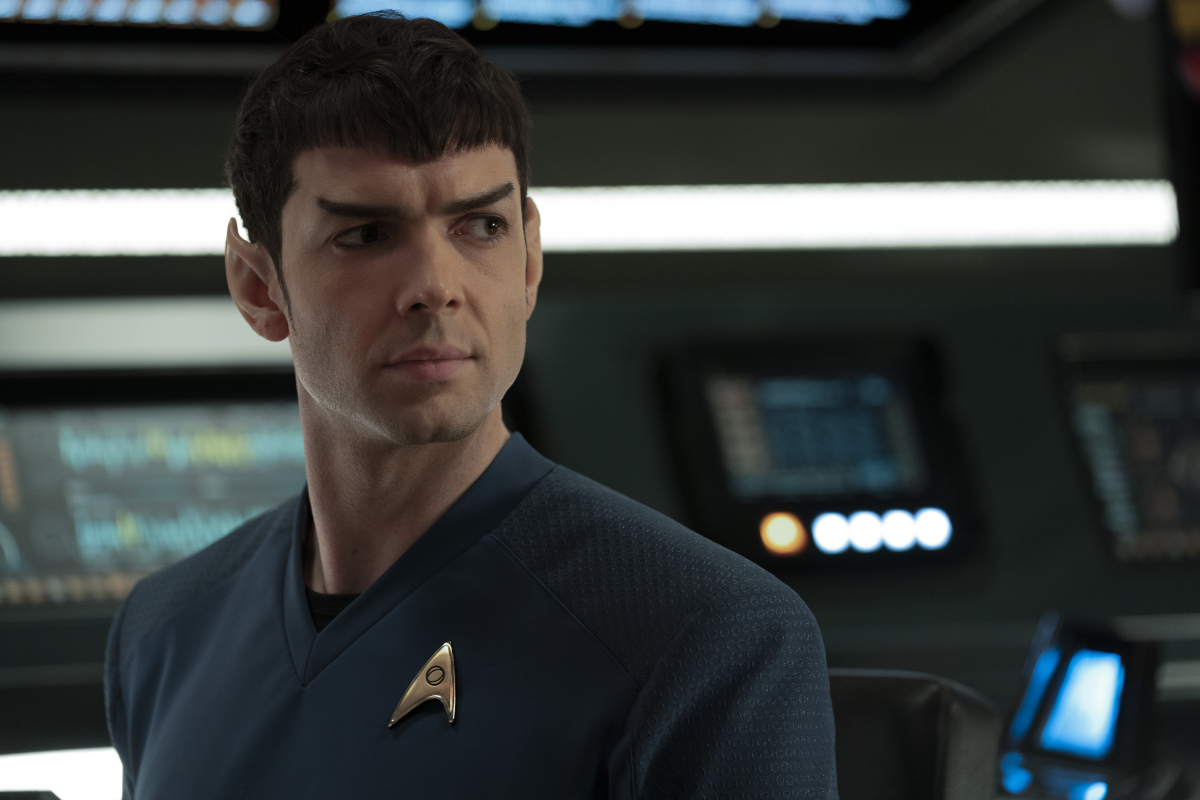 Spock and the Case of the Missing Pants

With the crew of the Archer trapped on Kiley 279 and an immanent threat of a warp-based weapon, Pike decides to obfuscate General Order One. Technically, if he can rescue his team and get off world, he will not break any real rules. With that in mind, Pike, Spock, and La’an take a trip to the medical bay where they meet Nurse Chistine Chapel. Chapel uses the latest medical tech to rewrite the away team’s genome enough to make everyone look like the citizens of Kiley 279. One catch: Spock’s half Vulcan, half human DNA means his rewrite won’t hold long.

On the planet below, Spock beams down and is suddenly in short pants. It’s very funny. Star Trek: Strange New Worlds is going to be a funny show! The team discovers a large protest outside a large building. They conclude that this is the likely location of the Archer crew. The away team dispatches people with the requisite uniforms they need. A lot happens here, but, for brevity, the away team makes it down to the basement where Una and company are being held.

Una explains that the warp bomb is technically the Enterprise’s fault. Someone on Kiley 279 saw the events at the end of DISCO season 2 with a telescope and reverse engineered what they saw into a bomb. Since General Order One is already broken, Pike decides to keep going. After having Una and La’an beam back aboard the Enterprise, he and Spock meet up with Kiley 279’s leadership. 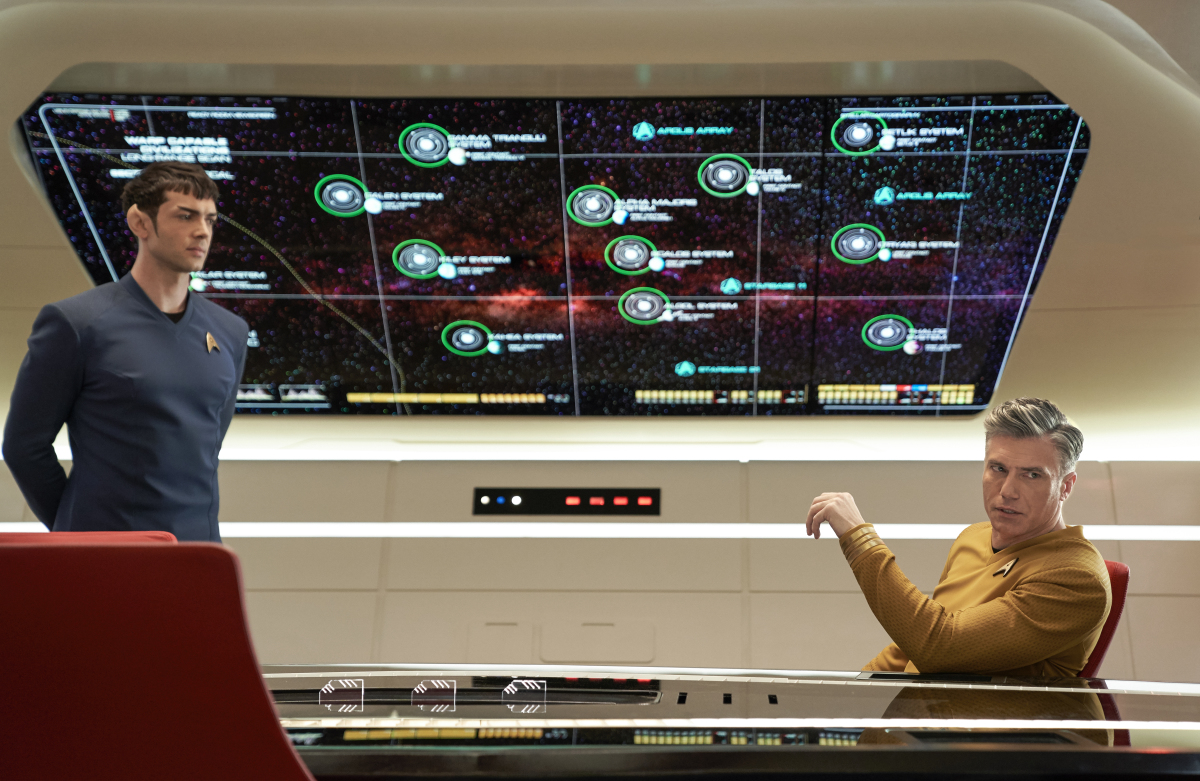 Kiley 279 is a Little Too Relatable

It turns out that the current leadership of Kiley 279 is fighting with a seditious faction. In fact, they’ve been fighting one another for centuries. The current leadership plans to use the warp bomb to wipe out the opposition. So, in for a penny in for a pound, Pike whips his, uh… ship out. Essentially, Pike points out that the most powerful person in this situation is him – and he would like some peace talks! So it’s like that, huh, Strange New Worlds? Okay!

The good news is that the peace talks start. The less good news is that the peace talks go off the rails very quickly. Once again, Pike travels down to the planet, but this time he brings some home movies. In specific he shows the people of Kiley 279 what it’s like for Earth to be part of the Federation a.k.a. what utopia looks like. Then he shows them what Earth used to be like. He shows some very unsettling footage of a certain January 6 insurrection before revealing that said insurrection leads to a second civil war. And then he reveals that said civil war leads to World War III which leads to the extermination of 30% of humanity.

Pike says that Kiley 279 is on target to do exactly what Earth did. He offers them the chance to join the Federation instead. We see a series of vignettes where people on Kiley 279 seem to be celebrating making first contact. 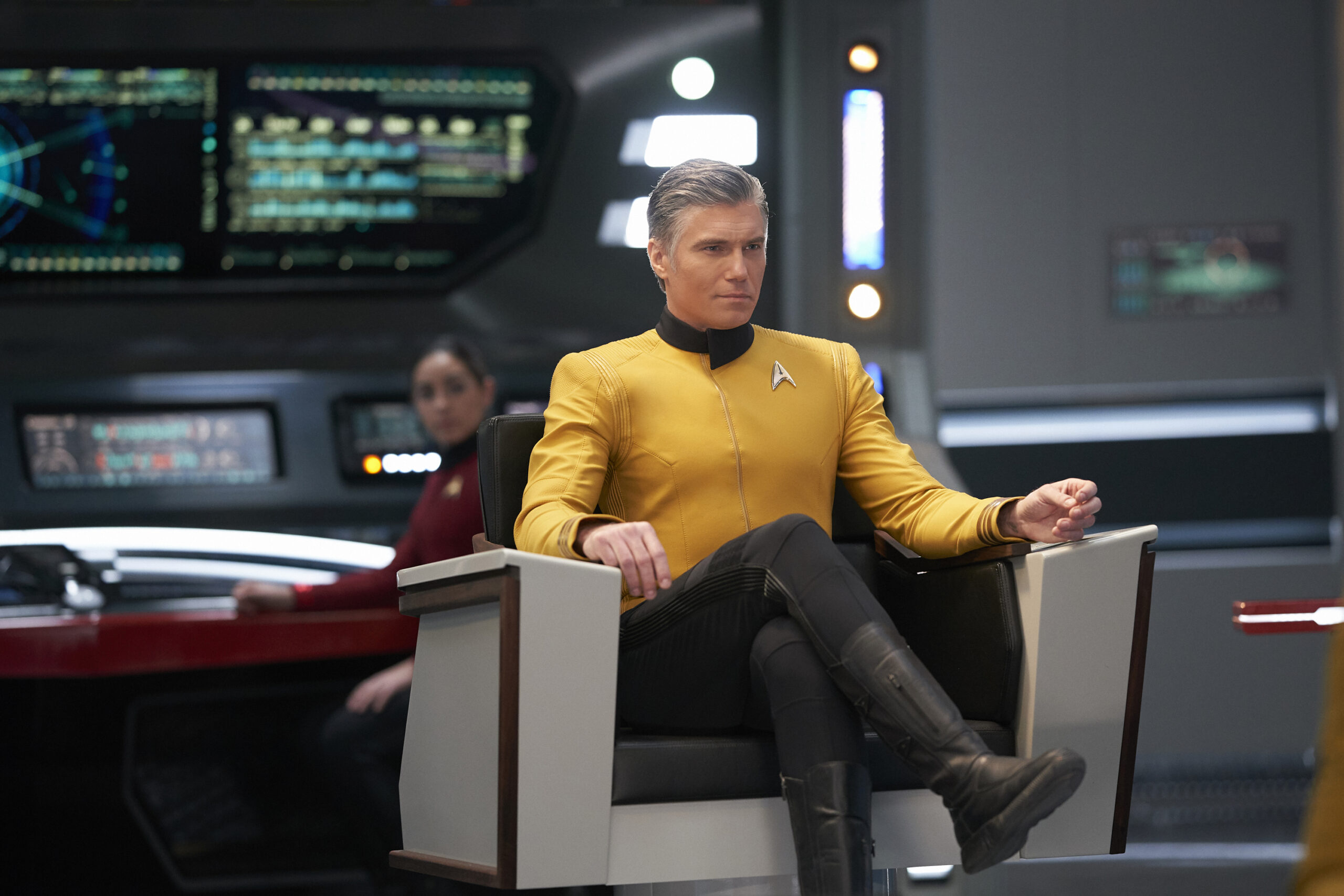 Post mission, Pike is told he and his crew were nearly court-martialed for breaking General Order One about a billion times. However a technically gets them off the hook. Pike decides he is going to remain the captain. And, with Una back in the Number One position, Pike also offers a commission to La’an.

The pilot episode of Star Trek: Strange New Worlds ends with Pike giving the classic “Space, the final frontier” speech as the new engineer, Hemmer, beams aboard. And we also meet Kirk – Sam Kirk, that is. Apparently, James Kirk’s brother is the latest addition to the Enterprise crew and is working under Mister Spock. Pike takes a seat in the captain’s chair and both he and the crew warp off to new adventures. 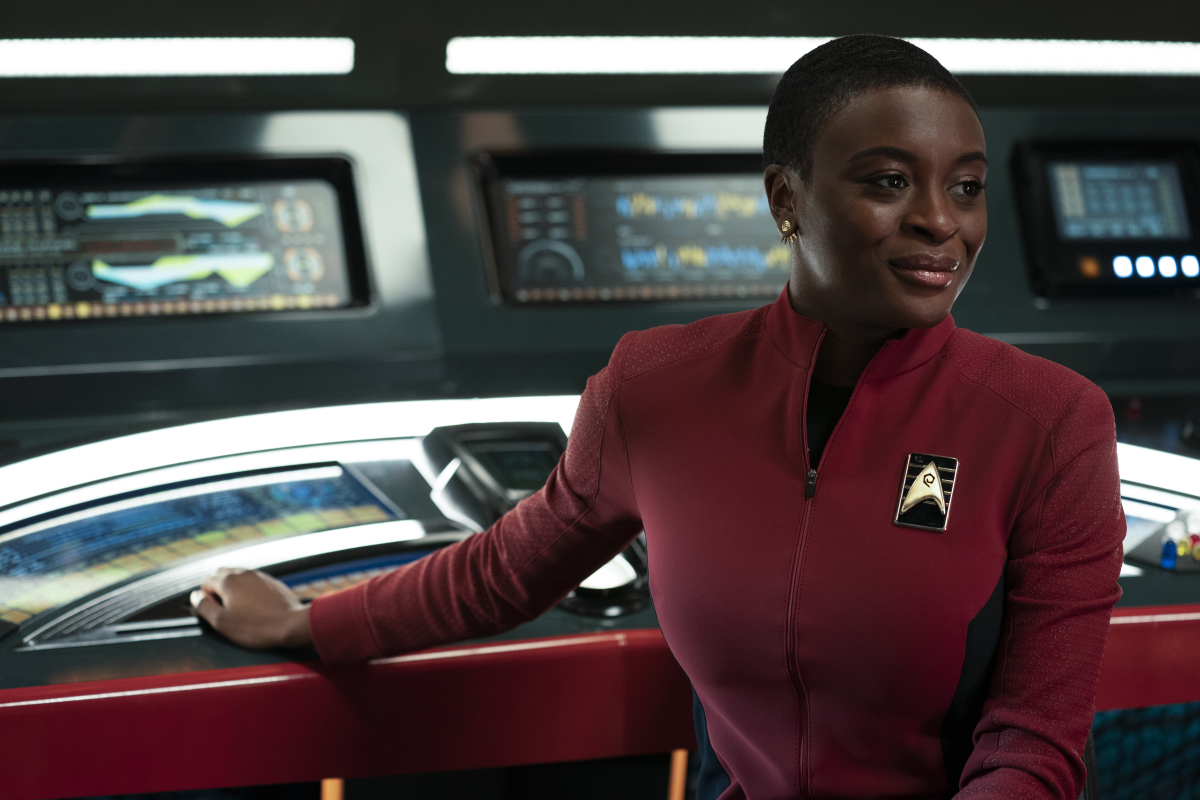 Obviously, we left out a lot in the recap. Don’t worry, that’s what reviews are for. And there’s a lot to talk about here, most notably the character building work in this pilot. It would be very easy to portray Pike as a real Negative Nancy in this episode. He is, after all, still coping with the inevitability of his horrible fate. Instead, after understandably being a hermit for a bit, he gets back to work. Pike talks to Spock who encourages his captain by basically saying “I love and believe in you, dad”. Absolutely adorable.

And then we learn a little about everyone else. Uhura is a cadet making the rounds and learning every role on the ship. There’s a scene where she waylays an escaped Kiley citizen by talking b-ball with him. That’s amazing! We also get to know Ortegas, who takes the comm while Pike, Spock, and La’an are on the planet and hilariously pushes everyone around.

We also meet M’Benga and Chapel. Christine Chapel especially is such a pip. She basically gives the Paul Rudd Anchorman “60% of the time, it works every time” speech about genetic alterations. Basically the only person not having the time of their life is La’an and that’s because her entire family was killed by the Gorn when she was a kid and she’s still pretty mad about it. Fair! What’s nice, though, is that La’an’s trauma leads Pike to realize that his awareness of his own doom doesn’t make him an inherently bad leader. Speaking of which. 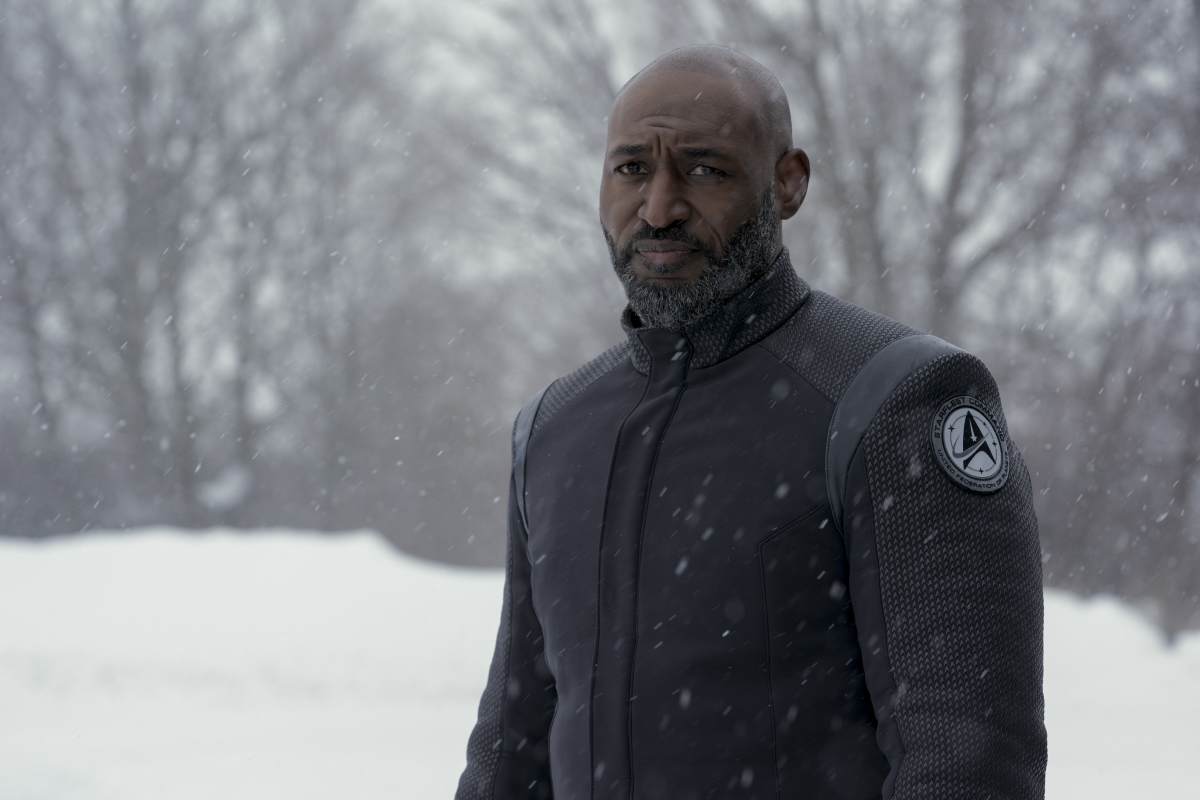 Despair is Easy, Hope is Hard

Kiley 279’s imminent destruction hits incredibly close to home. In fact, as I’m writing this review the Supreme Court of the United States is about to subtract body autonomy from over half the population. And they’ve freely admitted they are just getting started. Considering that this latest bit of horrific news is just another day in the American hellscape, it’s hard not to connect the proverbial dots. Between the climate crisis, Russia invading Ukraine, and the United States’ tendency to rob its citizens of their basic civil liberties, it’s hard not to think we’re on the brink of total civilization collapse and human extinction.

Star Trek: Strange New Worlds says America is headed for a second Civil War and that seems likely. It also says a third world war will follow and that seems likely, too. And yet, despite all that, the show reminds us that we still have a choice. We are still where Kiley 279 is. We do not have to kill each other and destroy the planet. Despite how horrific things seem, there is hope.

Part of me feels like Kiley 279 gets too easy a resolution. For a moment I thought we’d see the planet explode as the Enterprise warps away. But that’s not what Strange New Worlds is all about. It is, in the end, a show about accepting that, while certain things may be inevitable, there is always more good to be done up until the final moment. And that’s what Star Trek is supposed to tell us. 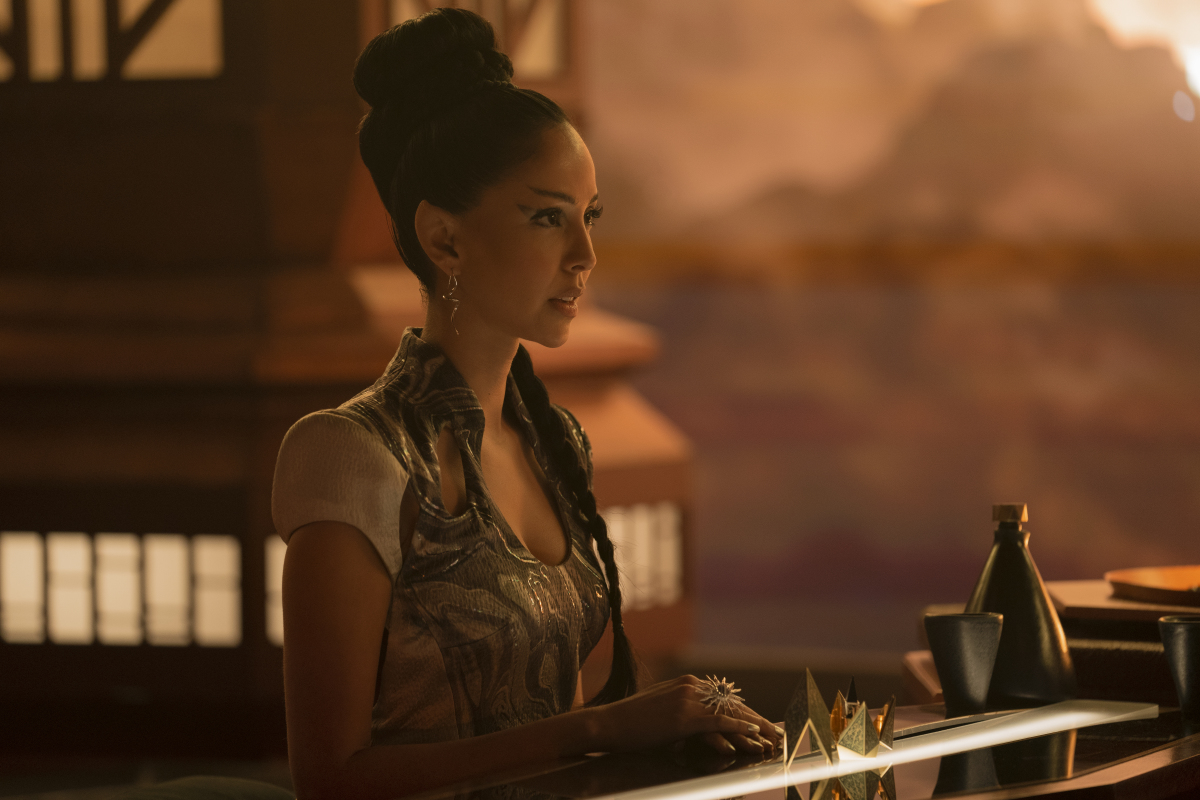 Admiral Robert April is actually the original captain of the NCC-1701 Enterprise. As a matter of fact, he and the Enterprise are first sent off by none other than NX-01 Captain Jonathan Archer. Maybe we’ll see that at some point on Strange New Worlds!

T’Pring will never actually marry Spock. We know this because of the Star Trek: The Original Series “Amok Time”. Weirdly, I’m far more sad about this than Pike’s inevitable fate. We’ll see T’Pring again later in the season, but I hope she gets a lot of screen time even if it all ends in heartbreak.

La’an loses her entire family to the Gorn. We have seen them in both TOS and on Enterprise. In the latter series they are portrayed as extremely low budget CGI. Here’s hoping we get something far scarier this go around.

Hemmer, who we see briefly at the end of the episode, is an Aenar. They are sort of cousins to the Andorians. They are blind, albino, and have the power of precognition.

Yes, James Kirk canonically has a brother, we just never hear much about him. It will be interesting to see how Sam fares this season and if he and James will interact next season. 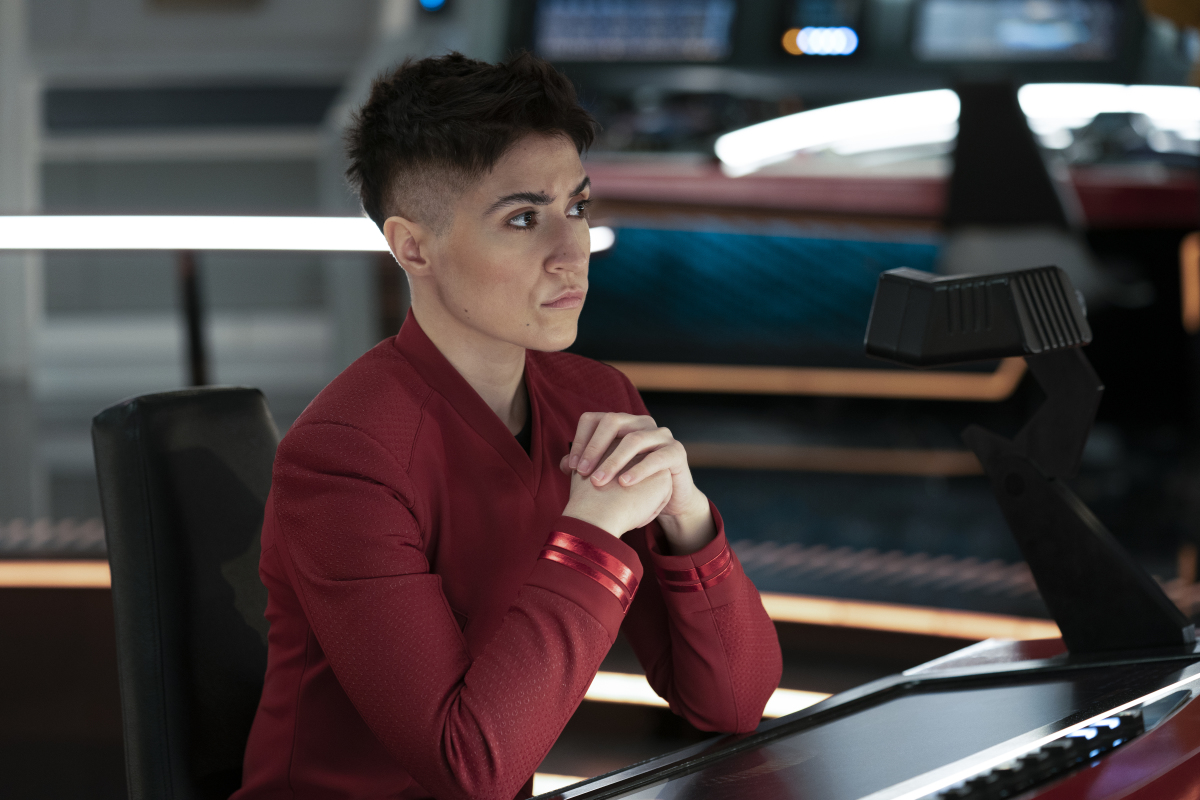 There’s about a million questions we can ask, but so far the world is our oyster. Will we get more of Pike dealing with his future? How will Spock and T’Pring’s relationship play out? Will Nurse Chapel flirt with everyone on the ship before the season is done? But most importantly, just how successful will Star Trek: Strange New Worlds be at episodic storytelling after the franchise has been so serialized for so long? Let us know what you think and we’ll see you next week for a very special Uhura episode! 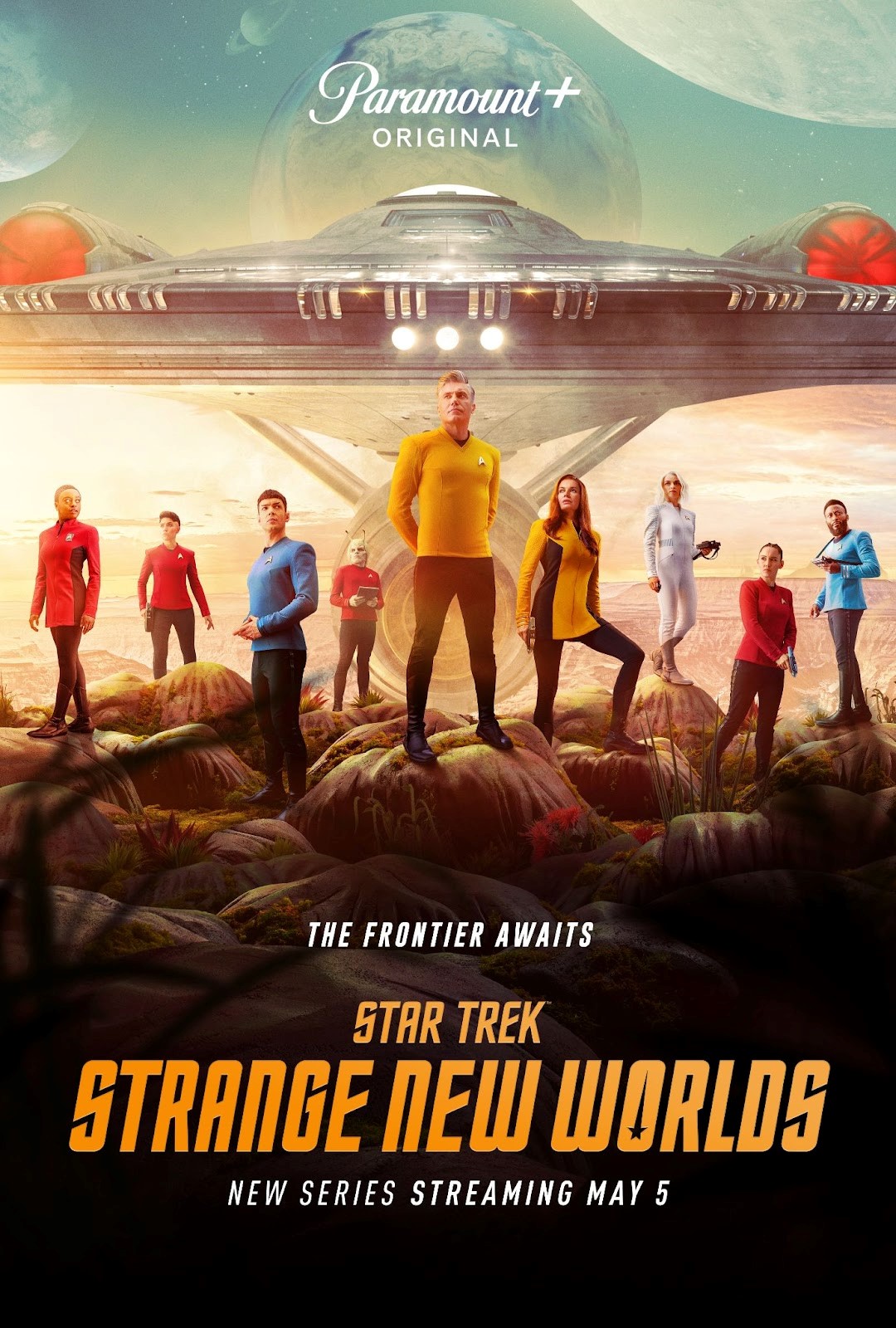 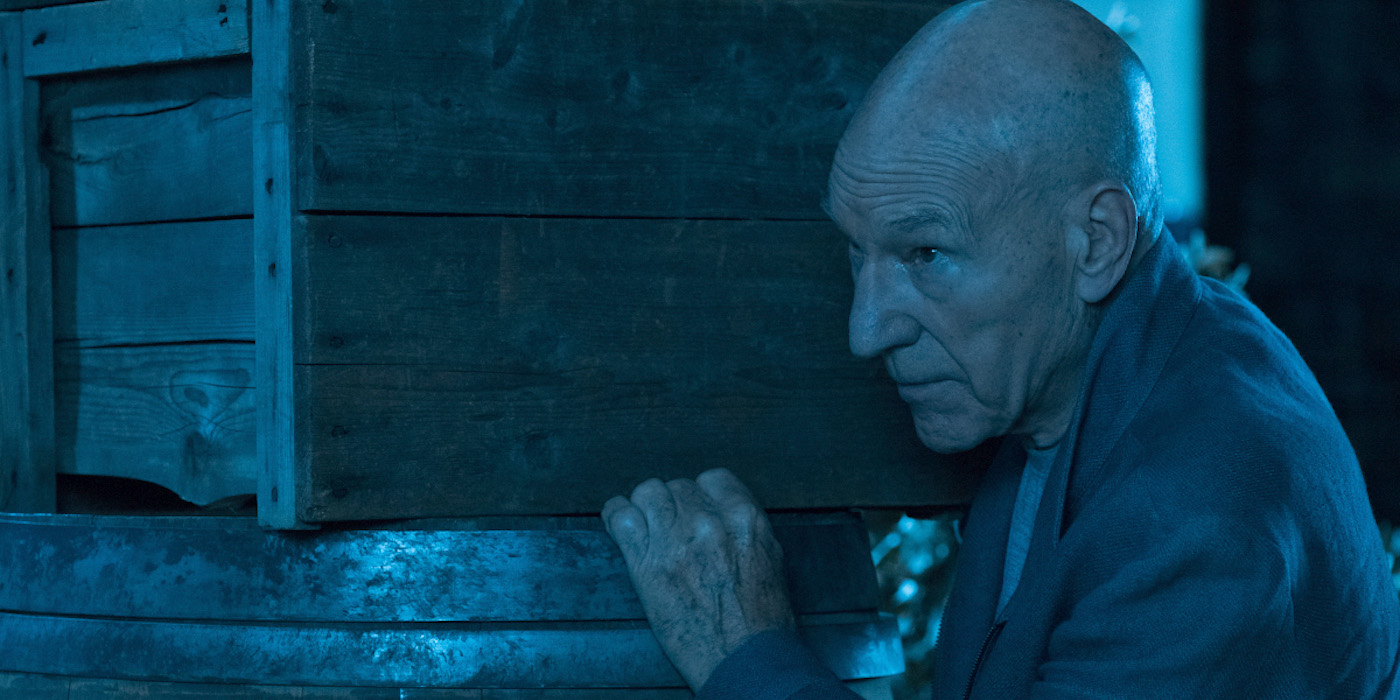