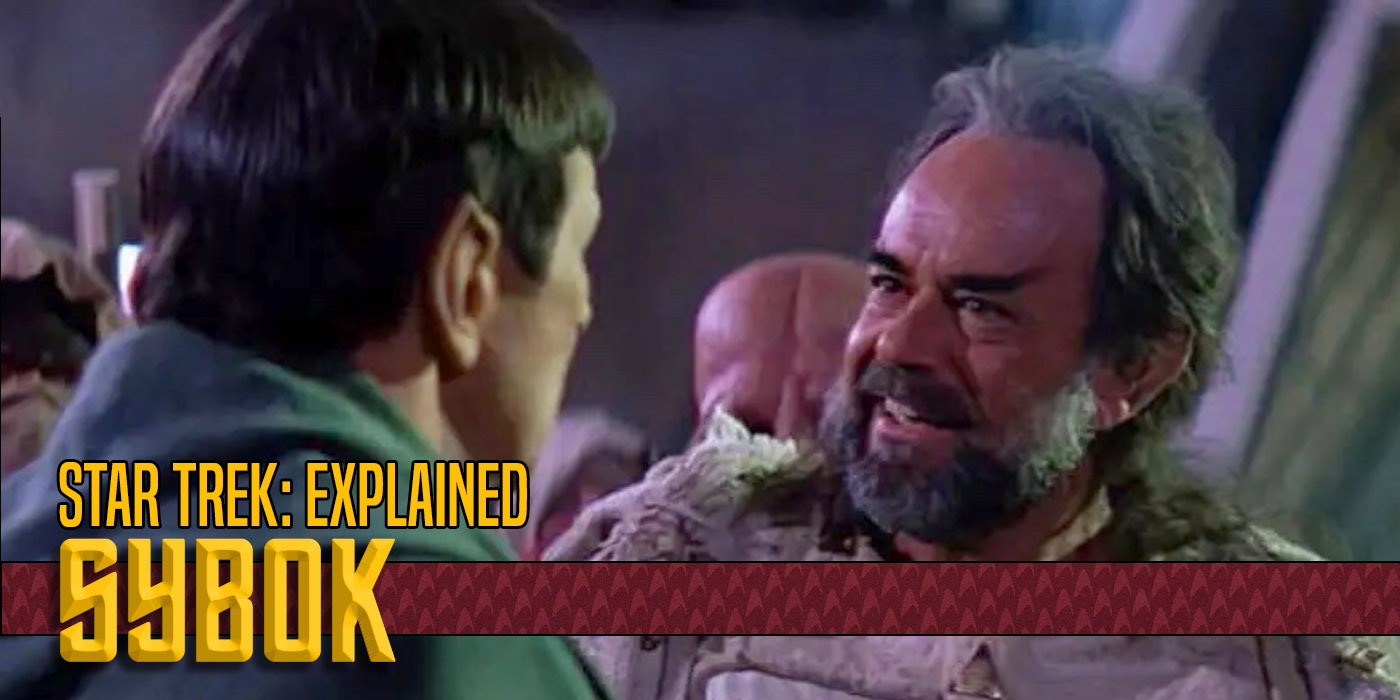 If Star Trek III: The Search for Spock is when the “odd Trek movies bad” trend begins to develop, then Star Trek V: The Final Frontier is the moment it solidifies. Star Trek IV: The Voyage Home ends on a very high note. Kirk and crew suddenly have a new Enterprise and the galaxy at their fingertips. They can go anywhere! They can do anything! And in that universe of infinite possibilities, they go… camping.

However, shore leave is not a movie plot (looking at you Star Trek: Insurrection) and the crew eventually find themselves on Nimbus III: the planet of galactic peace! There, they meet a mysterious man named Sybok who is searching for God. Despite how ridiculous that sounds (and it is), the character of Sybok is actually tremendously interesting. And despite the infamy of The Final Frontier, Sybok is set to be a future (probably) villain for Star Trek: Strange New Worlds. That makes now the perfect time to dig into everything we know about Sybok so far.

Let’s focus first on Sybok’s official history. Then we’ll delve into some interesting behind-the-scenes facts about the development of the character. And, finally, since we don’t actually know a ton about Sybok yet, let’s look at some of the unofficial information that may crop up in future canonical tales.

Precious little is known about Sybok’s youth officially. We can say for certain that his father is Sarek but that his mother is not Amanda Grayson. We can also say for certain that Sybok is older than Spock. And we can infer that he disappears from Spock’s life before young Michael Burnham shows up because Burnham never mentions him.

Spock avoids Sybok at all costs in his youth. In fact, up until recently the assumption is that Spock and Sybok do not see one another until the events of Star Trek V: The Final Frontier. However, we can infer that the pair do meet at least once before then. And, more importantly, we can say with near certainty that this will connect Spock with the V’tosh ka’tur.

The “V’tosh ka’tur” are viewed on Vulcan as Vulcans without logic. In actual practice, the group simply believes that emotions are not an impediment to logic. Of note is that the V’tosh ka’tur historically seem to use the Vulcan mind meld more commonly than other Vulcans in the 22nd century. This is potentially relevant because Sybok is part of the V’tosh ka’tur as a young man. And he seems to have potent psychic abilities later in life. And on that note… Sybok and the Final Frontier

The first time classic Trekkies meet Sybok is in Star Trek V: The Final Frontier. Basically, he holds diplomats on Nimbus III (that’s The Planet of Galactic Peace) hostage in order to get a starship to turn up. As it happens, the starship that shows up is the Enterprise (where Sybok’s younger half-brother Spock works). Sybok wants to steal a starship and take it to the center of the Galactic Barrier where he believes capital ‘G’ God lives in a paradise called Sha-Ka-Ree. That’s the gist.

But the really big thing to know about Sybok going forward is that he can control people psychically. Basically, he has his own form of mind meld where he reaches into the psyche, makes people relive and release their most painful memory, and thereby control them. Does it make sense? Nah. But that’s Vulcan mysticism, baby! It doesn’t have to make sense, it never has, and it never will!

What matters is that Sybok believes in what he is doing so much that it never occurs to him that he is doing harm. He is singularly focused on finding the truest of knowledge and the meaning of existence by meeting God.  And he’ll manipulate anyone in his way to get there. And “Sha Ka Ree,” while a fairy tale in Vulcan mythology, seems real to him. But what he finds in the Galactic Barrier isn’t God. Like so many gods in Star Trek, this one is actually just an evil alien life form – a trapped one in this case.

Tragically, Sybok’s story ends in his death. Realizing that “God” is more demon than deity, he sacrifices himself so that Kirk, Bones, and Spock can escape. And, narratively speaking, that’s all there is to Sybok officially. On the other hand… The Fraught History of Star Trek: The Final Frontier

Contracts are funny, aren’t they? You never know what you might find in one. In William Shatner’s contract for Star Trek there is a stipulation that anything Leonard Nimoy gets, Shatner also can have should he want it. Leonard Nimoy directed both Star Trek III: The Search for Spock and Star Trek IV: The Voyage Home. And that meant that Shatner was entitled to sit in the director’s chair. Star Trek V: The Final Frontier is the movie Shatner both conceptualized and directed.

Did I mention a writer’s strike broke out during production? Yes, that sure happened. Many things Shatner planned went by the wayside, including some giant rock monsters and a very elaborate third act. But we are here to talk about Sybok, so let’s focus on his creation. The most famous thing to know is that the character of Sybok is played by Laurence Luckinbill, but it was promised to another actor: Sean Connery. Connery was unavailable but his memory remains in the film. Sha Ka Ree is named after Connery. Sean Connery. Sha Ka Ree. Get it?

There are some inconsistencies in The Final Frontier movie which gain illumination in the novelization. How does Enterprise break into the Great Barrier, for example? Why, because Sybok alters the deflector shields, of course. Sybok, at least the book version, is also a technological genius. He also rides a unicorn rather than a horse in Shatner’s original concept. But that is just scratching the surface. What about the unofficial stuff? 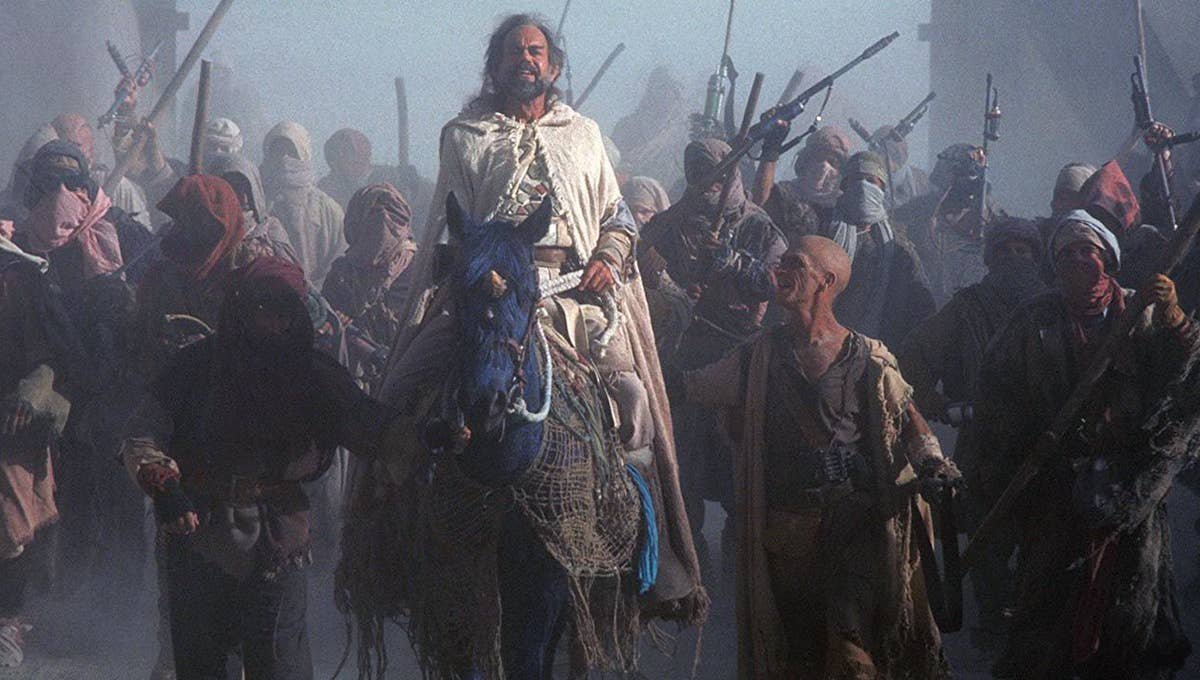 In addition to being the Son of Sarek, in almost all other non-canonical instances, Sybok is also the son of a Vulcan princess. In most cases her name is T’Rea. T’Rea does not have a consistent back story. In some stories, she is the one who tells Sybok about Sha Ka Ree. In other instances, T’Rea abandons both Sybok and Sarek for mysterious reasons to live the rest of her days in seclusion. For our purposes we’ll focus on The Autobiography of Mr. Spock by Una McCormack because it is the most recent book on the subject. Also, McCormack is a storied Trek writer who recently wrote official books for Star Trek: Picard.

According to McCormack, Sybok is an ally to a young Spock, one of the few the half-human Vulcan has as a child. However, Sybok is a constant disappointment to their father Sarek, in particular because he repeatedly falls to complete the kahs-wan rite of passage. Basically, an adolescent must survive 10 days in Vulcan’s Forge without food, water, or weapons. If a Vulcan fails after three attempts, they fail forever. Spoiler alert: Sybok fails all three times.

However, on his third attempt, Sybok has a vision – of Sha Ka Ree. After this, Sybok dedicates his life to the history of both the Vulcan mind meld and the existence of Sha Ka Ree. When Sarek discovers Sybok’s aims, he disowns his eldest son. Spock, fearing a similar fate with Sarek (which eventually happens) cuts all ties with Sybok.

If it were not for the fact that these versions of events see Sarek and T’Rea married at once point, they might even be canonical. As it is none of this story is official… yet. But good money says some of it will be incorporated.

Sybok to the Future

As of this writing we know Sybok is part of Star Trek: Strange New Worlds. And we also know that he is a part of the V’tosh ka’tur. Finally we know that he is at the Ankeshtan K’Til Vulcan Criminal Rehabilitation Center with T’Pring. We do not know why Sybok is there beyond breaking with Vulcan tradition. However, T’Pring does say murderers live at the center as well. Might Sybok be a murderer?

The big thing to consider for Sybok’s place in Srange New Worlds‘ future is the past. Nearly every crew member aboard the Enterprise has a tragic backstory. Una’s people, the Illyrians, are Federation outcasts. Uhura’s parents are dead. M’Benga has a terminally ill daughter. And Pike, of course, knows he will be permanently crippled in ten years. And Spock lost Michael.

In other words, if Sybok currently has the ability to control people by seeing and taking their pain, the Enterprise is a good mark. We’ll find out more in the coming episodes and seasons of Star Trek: Strange New Worlds. 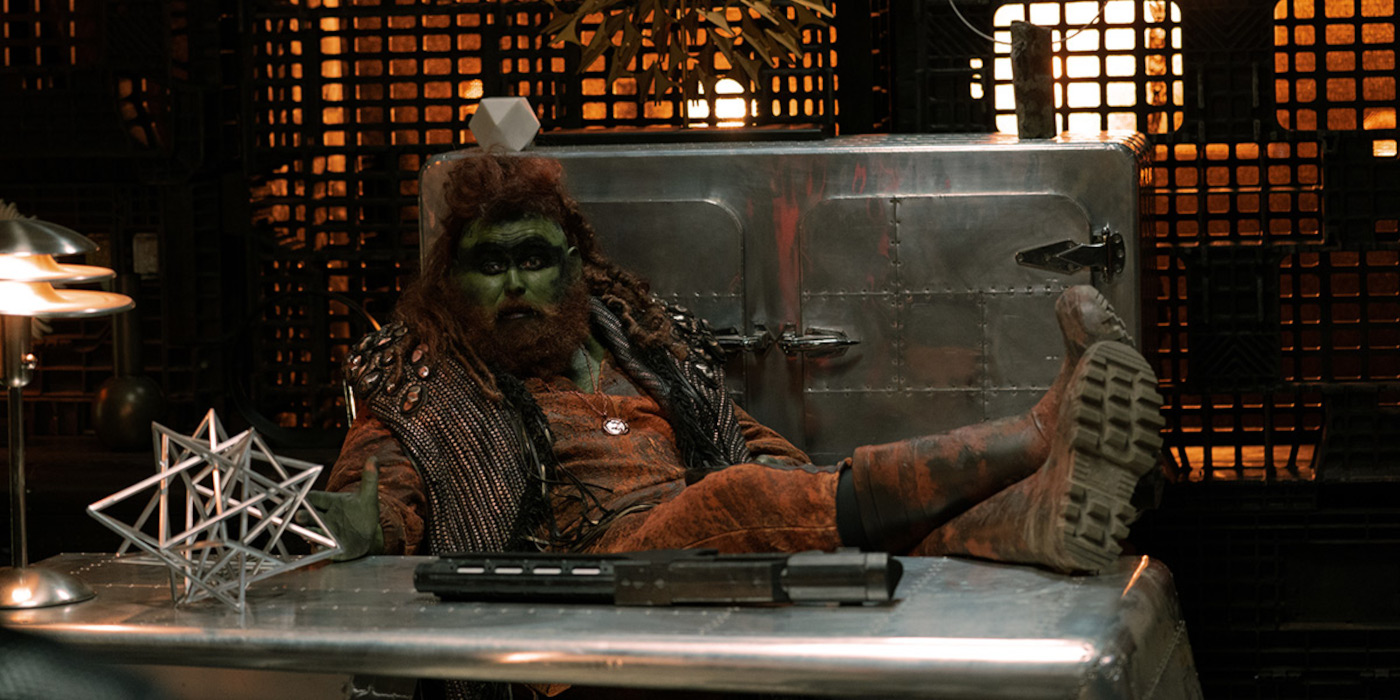