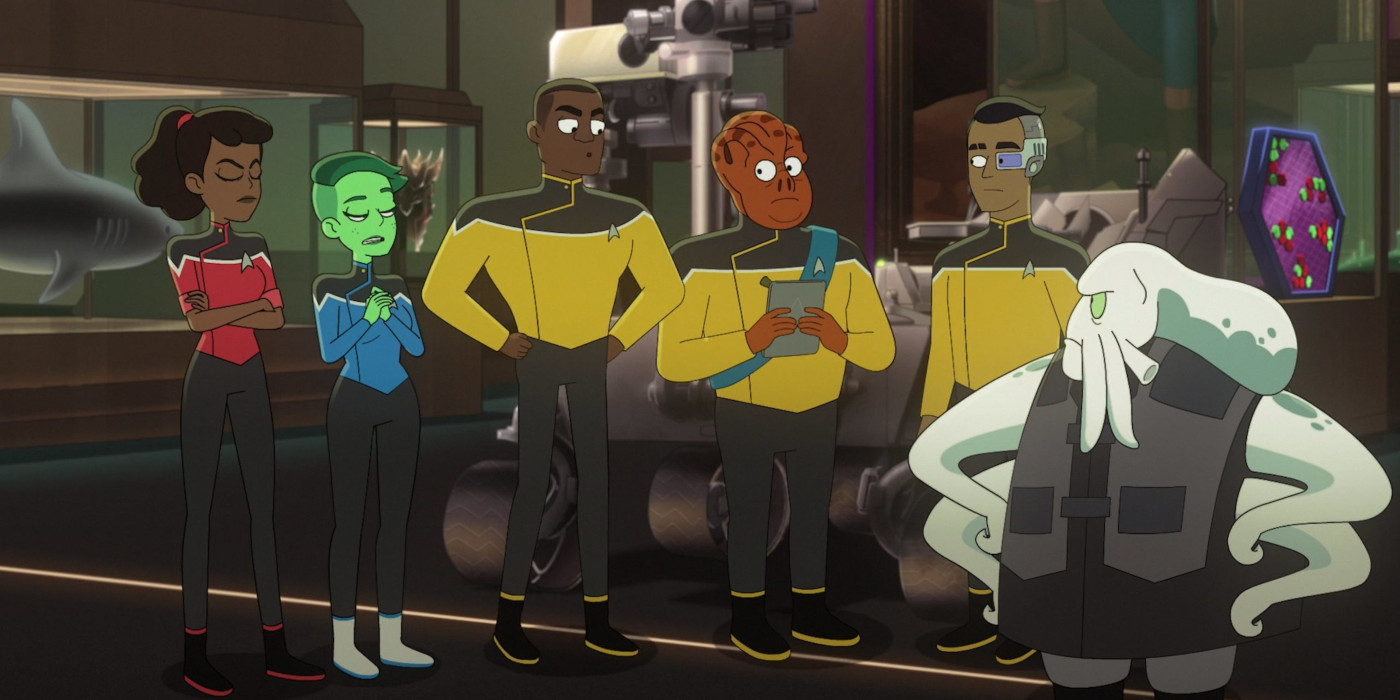 With the first season of Star Trek: Lower Decks, everything is untested. Yes, there’s the animated series from the 1970s, but that’s different. Star Trek: The Animated Series is serious… in theory. Lower Decks is an intentional comedy. And while Star Trek is certainly funny on occasion, comedy isn’t usually the overarching goal.

But one season in, Lower Decks is good. That’s the headline. The larger question becomes, what happens next? And in the second season, Lower Decks takes a page out of the Orville book by nudging ever so slightly toward serious character-building. Not too much! It’s still a silly cartoon about and for silly people. So how does Lower Decks season two shake out? Let’s recap, shall we? 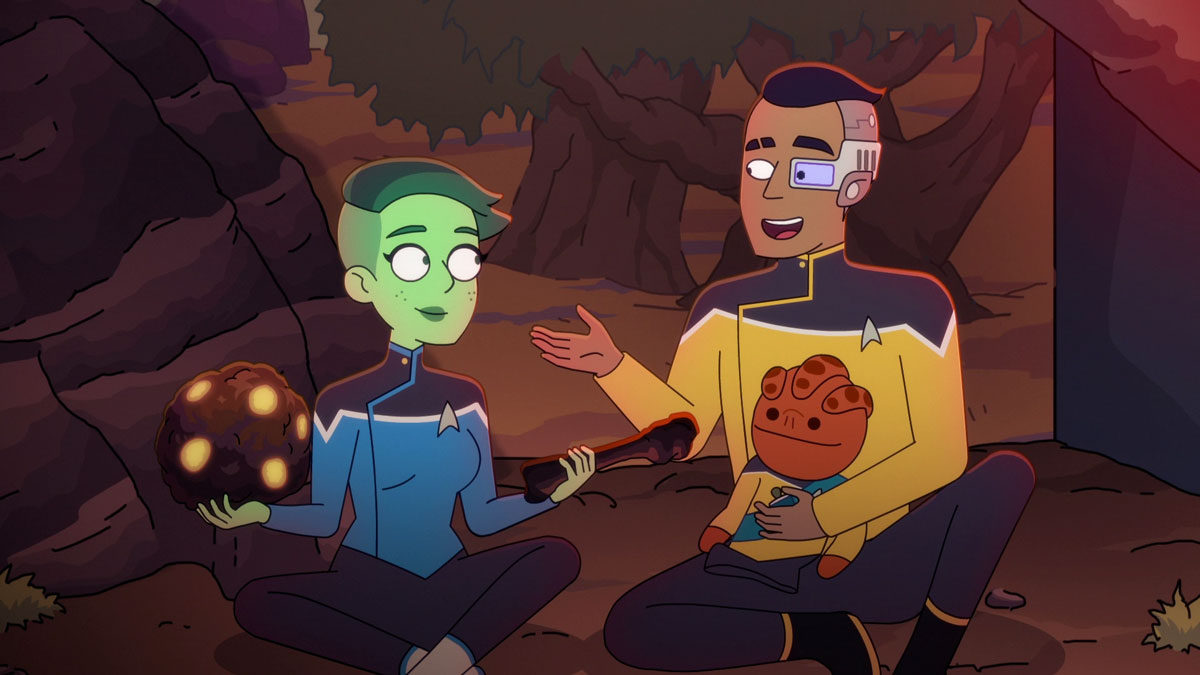 There are a few overarching changes for Star Trek: Lower Decks season two. The biggest change is that there is a somewhat consistent ongoing villain in the form of the Pakleds. In season one, the Pakleds were discovered to be more powerful than they used to be. Season two is the story of what the Pakleds are up to and why.

Our heroes are all ever so slightly different. Boimler stars the season aboard the Titan rather than the Cerritos. Mariner is still adapting to the ship knowing that Captain Freeman is her mother. And Rutherford and Tendy are both rebuilding their friendship after Rutherford lost his memories.

There’s news on the senior stuff front as well. We find out that chief engineer Andy Billups is a prince on the Ren Faire planet of Hysperia. If Billups has sex, he must immediately resign his Starfleet commission and become king.

There’s a new security chief on board in the form of Kayshon. Kayshon is the first Tamarian member of Starfleet. The Children of Tama are those aliens who speak in meme.

And speaking of security, Lieutenant Shaxs (who died last season) is back from the dead. Apparently, after death, you go to the Black Mountain a spiritual battleground where your soul fights three faceless apparitions. Anyway, Shaxs is alive again! What Happens in Season Two?

First things first, Boimler is still on the Titan with Captain Riker. However, on an away mission Boimler accidentally winds up with a transporter clone. One version of him stays on the Titan, the other accepts demotion and returns to the Cerritos. And for a while, Mariner stays mad at Boimler for ditching her. But eventually, they patch things up, fail to sneak into an exclusive party, and wind up drinking at Kirk and Spock‘s old watering hole.

But the larger story is the Cerritos and its crew’s ongoing attempts to figure out what’s going on with the Pakleds. At one point, the ship goes to Pakled Planet (yes that is the name of their home world) and tricks a Pakled spy into revealing their plans. It turns out the Pakled intend to smuggle a Veruvian bomb to Earth. And while the Pakleds are power-hungry, Freeman suspects there’s someone else involved.

The good news is, Freeman is correct. It turns Klingon Captain Dorg is supplying the Pakleds with weapons in order to destabilize the Federation and reassert the dominance of the Klingon Empire. Even better news, the Pakleds are largely stopped in their tracks. Bad news: Pakled Planet is destroyed. Worse news: Captain Freeman is falsely (we think) accused of being in on the destruction of Pakled Planet.

Also, Rutherford remembers that his cyborg implants were not installed voluntarily but he doesn’t remember the actual reason. And Mariner develops feelings for an Andorian named Jennifer. 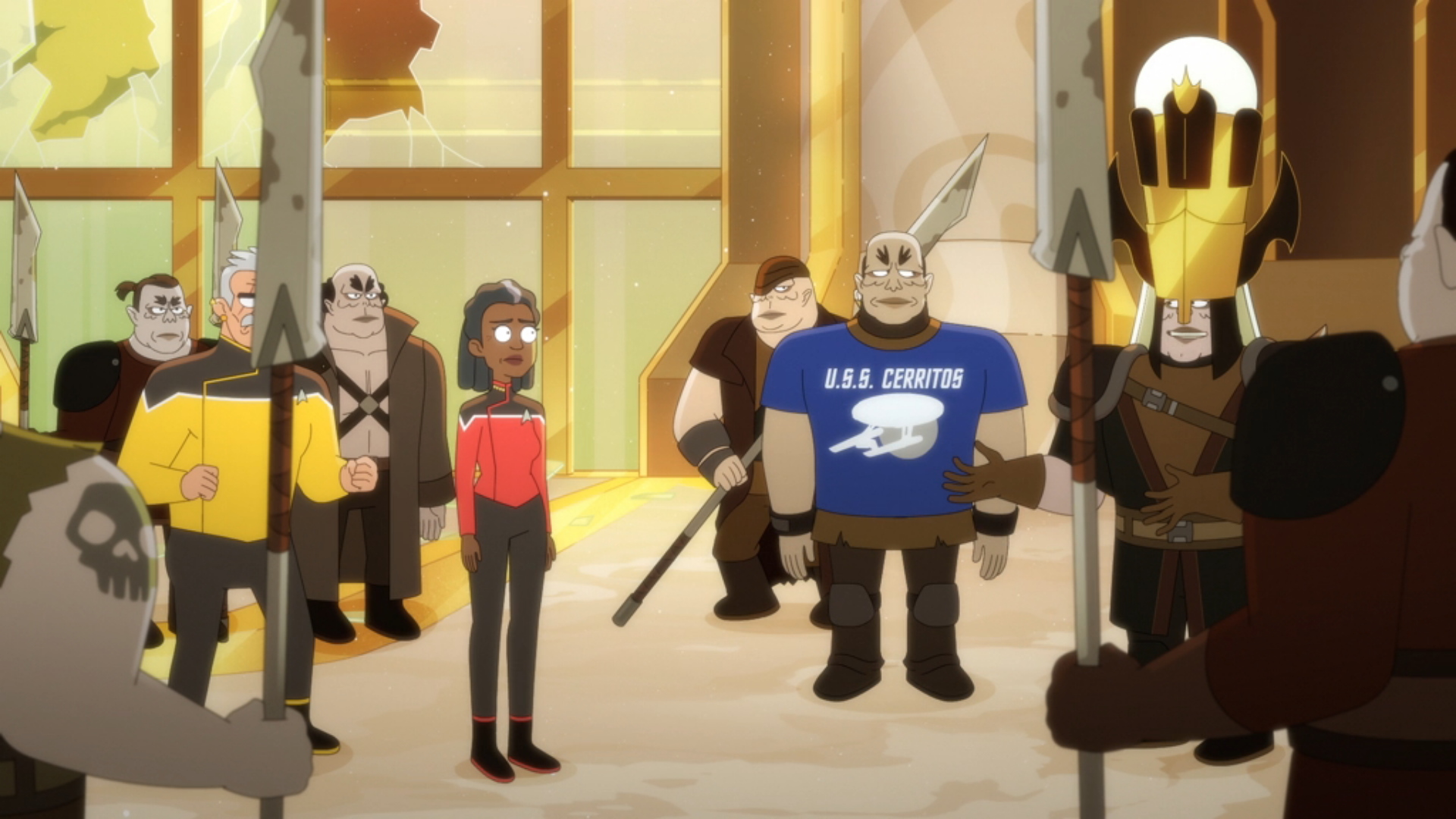 Obviously, the Pakleds and Captain Dorg are the obvious villains for Star Trek: Lower Decks season two. However, there are a few other folks worth mentioning. Not least of which is Boimler’s transporter clone Will Boimler. Not only does he steal Bradward Boimler’s position on the Titan, but he’s also a massive tool.  Will Riker’s clone, Thomas Riker, winds up being a member of the Maquis, so who knows where Will Boimler will wind up.

There’s also AGIMUS, an evil computer who controls an entire planet – until the Cerritos comes along, that is. He is powerful enough that, if he can interface with almost any larger computer system, he could take over other planets. Thankfully, Boimler and Mariner lock AGIMUS up at the Daystrom Institute. But don’t expect that to last forever!

And then there’s Shari Yen Yem, an instructor who uses their holodeck programs to test the crews of starships. They purposefully create unbeatable tests in order to fail the Cerritos crew and prove their tests serve a purpose. Yen Yem is defeated, but they can split themselves in three ways so who knows when at least part of them might turn up? 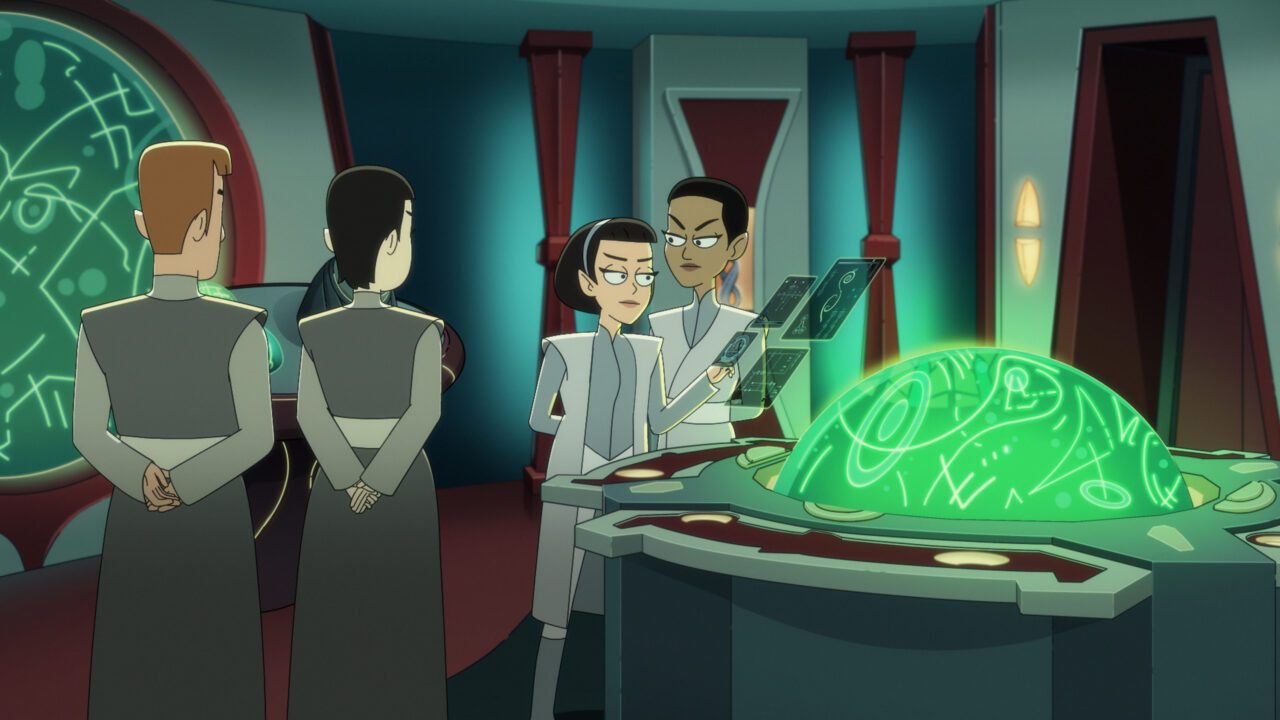 The best episode of Lower Decks so far “wej Duj” features lower deckers from other ships, including Vulcan and Klingon vessels. In addition to being the episode that reveals the Paklad’s plan, we meet two other characters who could be very important in the future.

The first is Mach, a Klingon lower decker who manages to best Captain Dorg and take over the ship as captain. He may be weaker than other Klingons physically, but he has enough sense to know that Dorg’s actions aren’t very honorable and he’s cunning enough to do something about it.

The second is the ever so slightly emotional Vulcan T’lyn. She discovers strange energy readings and convinces her captain to investigate. As a result, a Vulcan ship shows up in the middle of a battle between the Cerritos and Pakleds/Klingons just in time to save the day. T’lyn is punished for acting on instinct rather than logic and is assigned to join Starfleet.

And that is everything you need to know about Star Trek: Lower Decks season two. Stay tuned next week when we’ll reveal details for the upcoming third season!

'Prey' Review - A 'Predator' Pre/Sequel That's Actually Good For Once 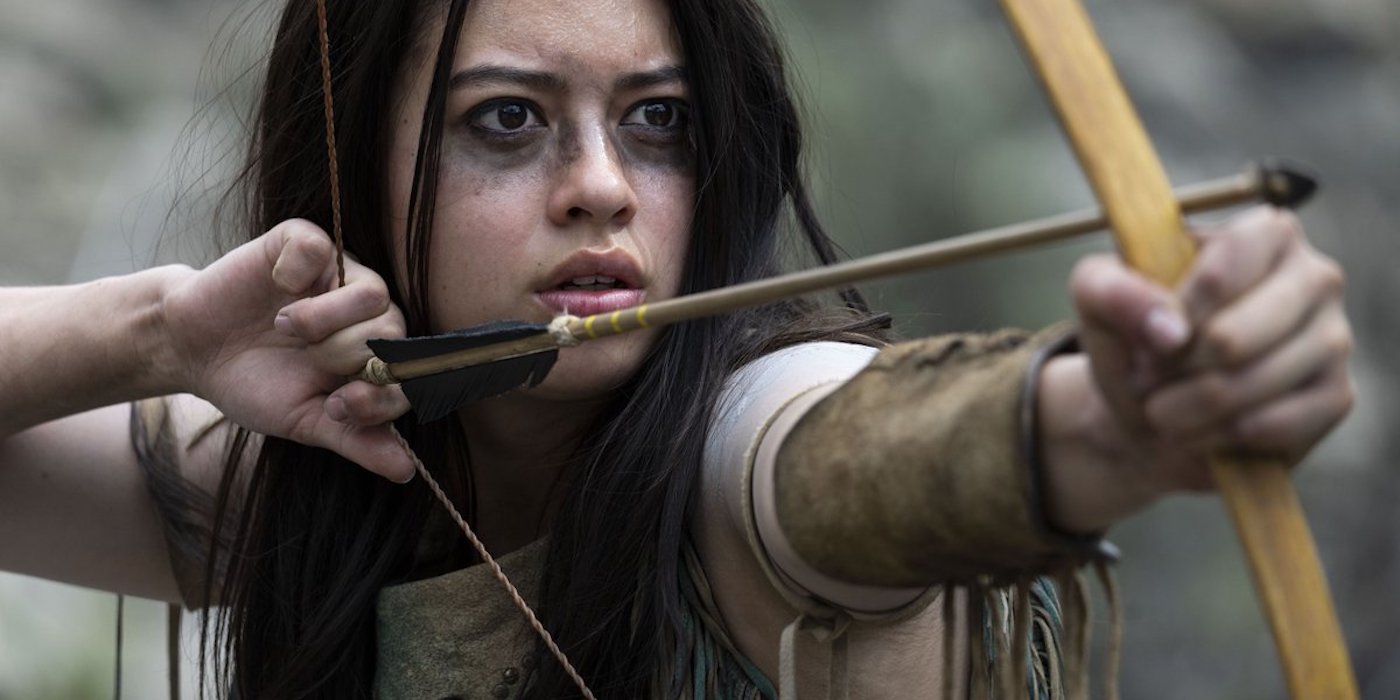