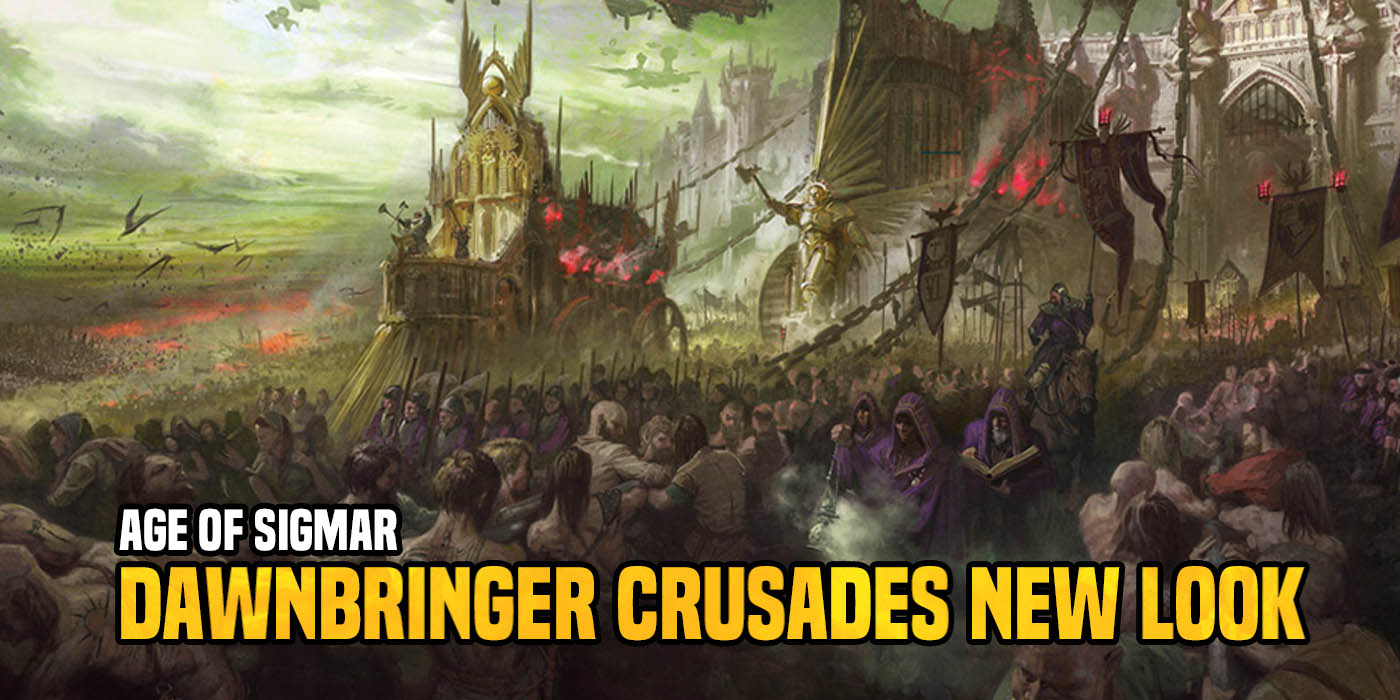 Games Workshop is revealing the first weapons from the Dawnbringers. The Cities of Sigmar are in for a few big changes ahead.

We’ve been waiting for a while for more news on the Dawnbringer Crusades. And we’ve been theorizing that they would essentially be the update to the Cities of Sigmar. Well today Games Workshop confirms that the Cities of Sigmar are indeed getting a redesign and is showing off some of their new look.

“The Cities of Sigmar represent the common folk in Warhammer Age of Sigmar, a vital faction who put the “mortal” into the Mortal Realms. The humans, aelves, and duardin of the Free Cities make up the bulk of Sigmar’s faithful – and the majority of his armies. The Warhammer Studio is currently hard at work redesigning the Cities of Sigmar, and we’re here to bring you another behind-the-scenes look at how they’re developing.”

First up we get a look at some of the classic weapons of the upcoming range change. All of which are perfect to “bash, slash, and smash” your enemies. The weapons look simple and have a nod to the old world origins as well as more Sigmar Devotee flair. Most of the hands look human, too. I’m hoping we see units of Aelves, Humans, and Duradin, as it would really make the Free Cities feel more like a hodgepodge of the “mortals” fighting together against the realms. 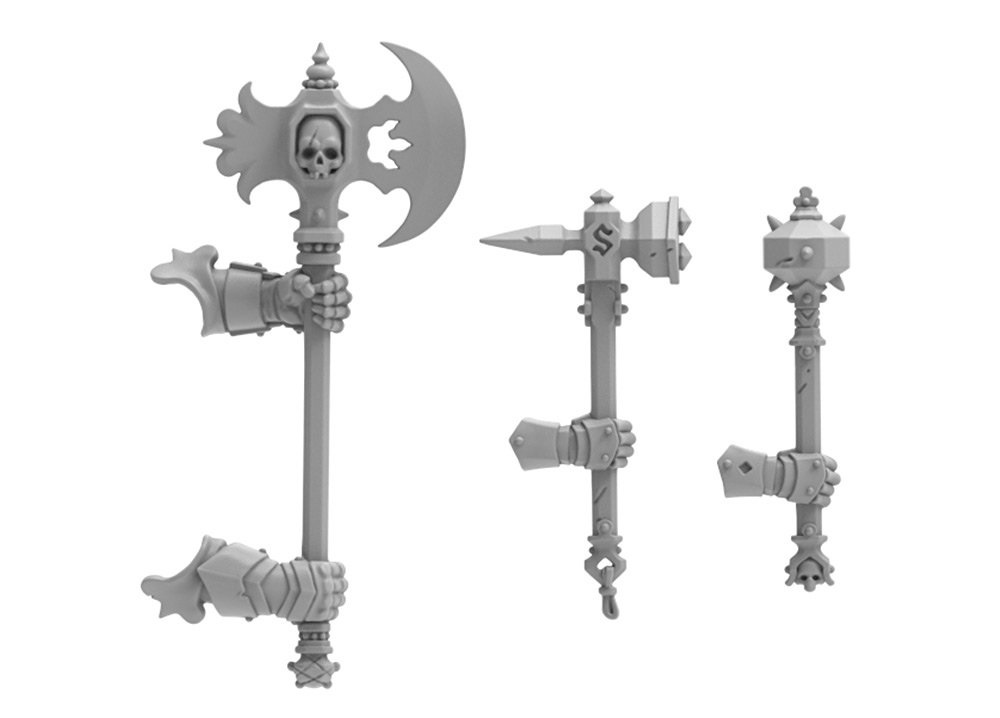 Here we get a look at a two-handed axe as well as other weapons. Again, lots of nods to Sigmar iconography here. These gauntlets certainly look like they are well armored and could possibly be from the same unit. And, while these weapons might be mundane instead of magically infused with Sigmar’s own lightning, I’m betting they can still cut/bash down their enemies when you apply enough force to the situation.

And just in case you were concerned that this wasn’t “Empire enough” well…here’s your black powder weapons! Handcannon and uh…pike-handcannon combo! I’m pretty glad these Empire weapons are getting redesigned and included in an updated Cities of Sigmar range. 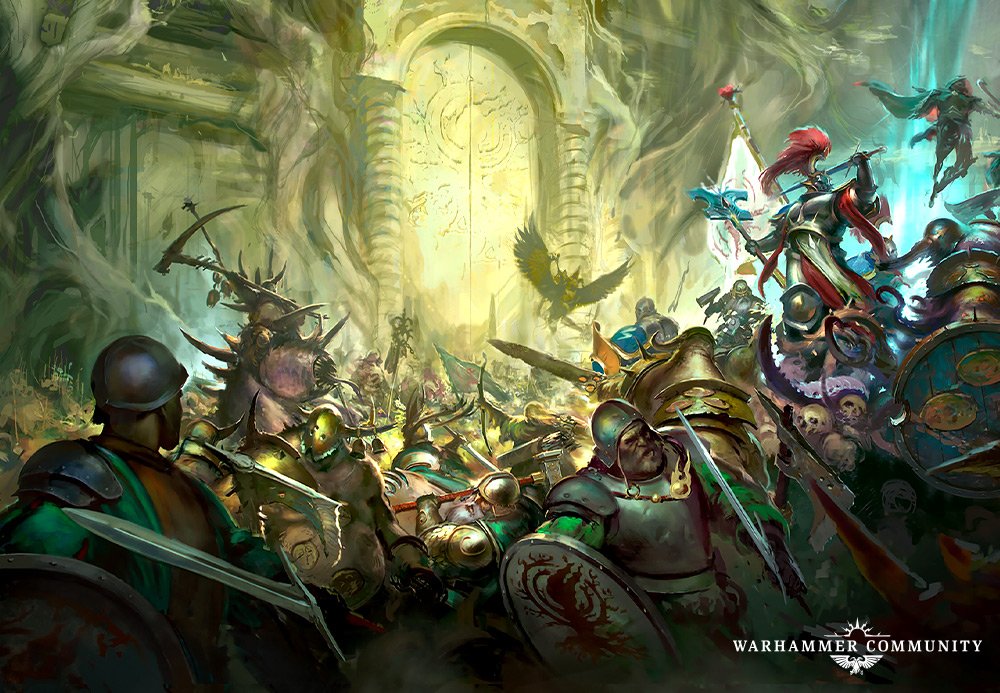 Don’t expect to see this army anytime this year. We already got the rundown on what’s coming direct from Games Workshop for the remainder of the year for Age of Sigmar. That said, this sure feels like GW is doing that thing where they check in periodically with the design team to show off an upcoming army with big changes. Kind of like they did with the Sisters of Battle and the Leagues of Votann. This could be a long term project so keep an eye out for even more from the Dawnbringer Crusades!

Author: Adam Harrison
Writer, Editor, Texas Native, and Austinite for 15+ years, Adam covers all things Tabletop Gaming. Which includes Warhammer 40,000, Age of Sigmar, D&D, Board Games and everything else that involves dice, boards, cards and a table. A hobbyist, player, and collector of miniatures and games, Adam's current obsession are his Death Armies for Age of Sigmar, his Blood Angels and Tyranids for 40k, and his ever growing Arkham Horror: The Card Game Collection.
Advertisement
Age of Sigmar AoS Order Games Workshop Miniatures
Advertisement

Age of Sigmar: List of the Week - Iron Stampede