LotR: Who is Gil-Galad, the Lord of the High Elves 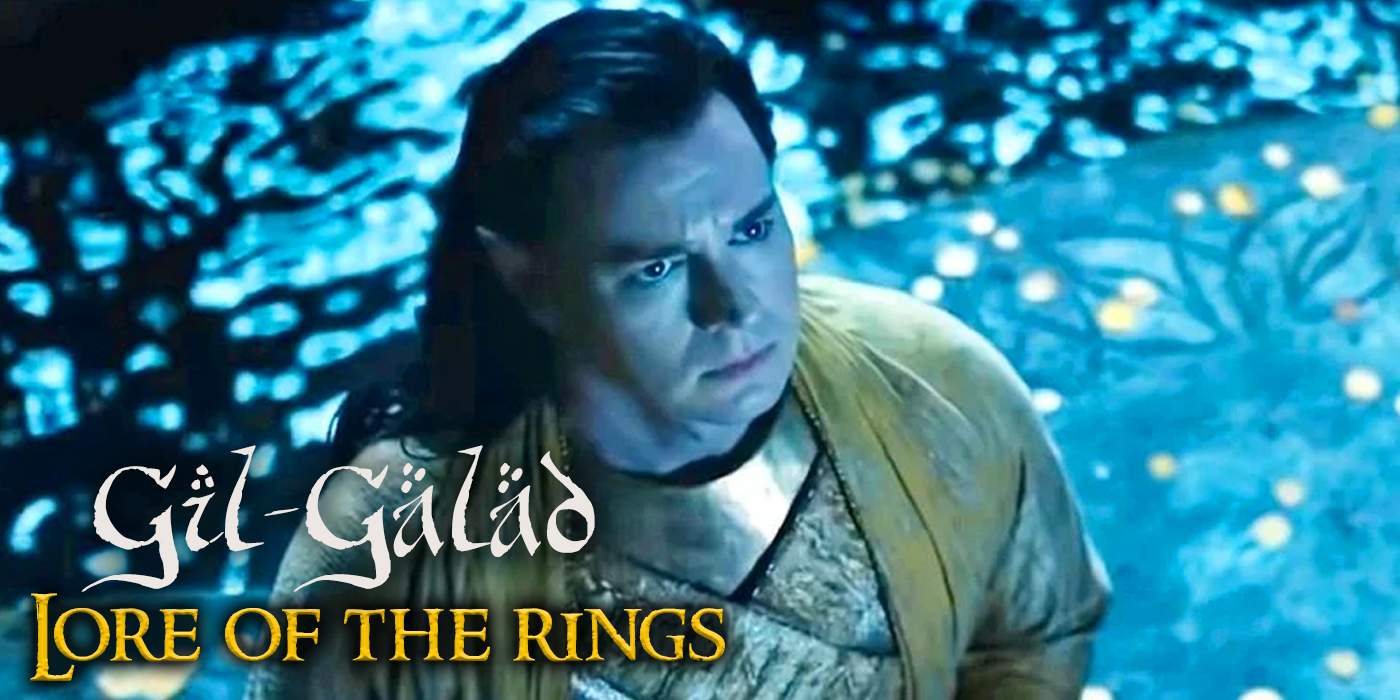 If you haven’t heard of Gil-Galad, he’s kind of a big Elvish deal. Both his life and death heavily influenced the fate of Middle Earth.

It’s amazing how many big-deal characters enjoyed quiet cameos in Peter Jacksons Lord of the Rings trilogy. While his appearance on screen was brief, his wisdom guided the armies of Men and Elves to that battlefield. He’s the High King of the Noldor, King of the Eldar, and the Lord of High Elves. He was Elrond’s mentor, and Gil-Galad managed to garner the respect of both the Noldor and Sindar Elves.

Who is the High King of the Noldor? And what circumstances lead to his tragic death at the hands of the Dark Lord Sauron? 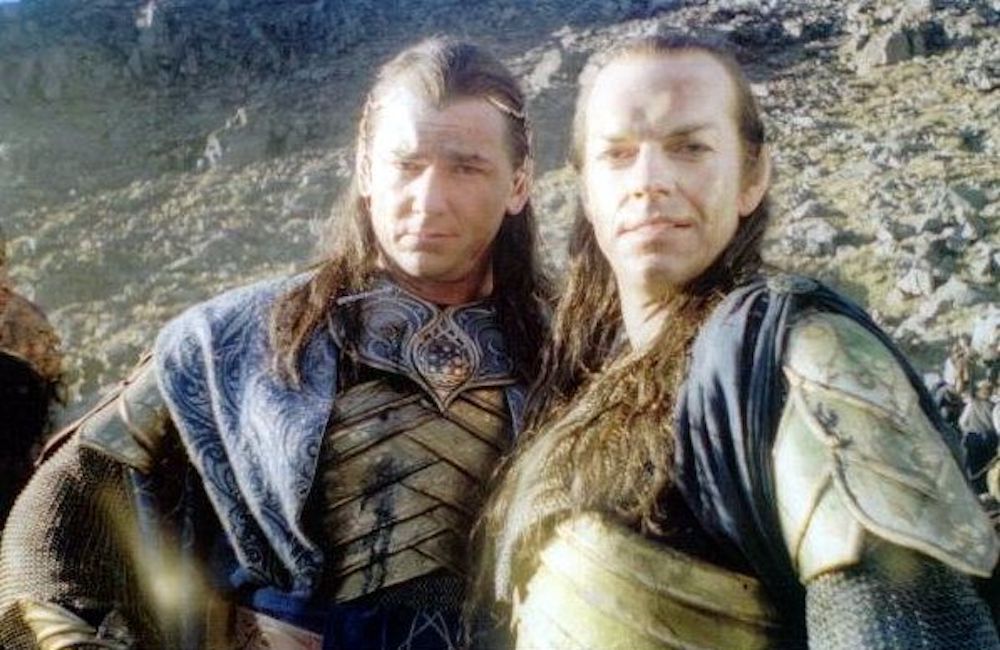 “Just getting a battle-selfie with my dad-figure Gil-Galad! #mentor” – Elrond, probably

Gil-Galad in the First Age

Gil-galad was born sometime in the First Age. His original name was Ereinion, and he was Noldorin Elf. He was a descendant of Fingolfin, who was famous for leading a group of Noldorin Elves through Helcaraxë, the icy wasteland between Valinor and Middle-Earth. He did plenty of other important things, too, but you’ll just have to wait for his Explainer.

Gil-Galad inherited the crown of the Noldor, and he managed to keep the island of Balar safe during the growing evil reign of Morgoth. Morgoth was the Big Bad of the First Age, and a young Sauron’s master. During the war against Morgoth, the War of Wrath, Balar was sunk into the sea, along with the rest of Beleriand. There’s a lot of “land sinking into the sea” as a result of war.

It was also during the First Age that Gil-Galad took the Half-Elven Elrond as his herald. Gil-Galad would prove a great influence in Elrond’s life. 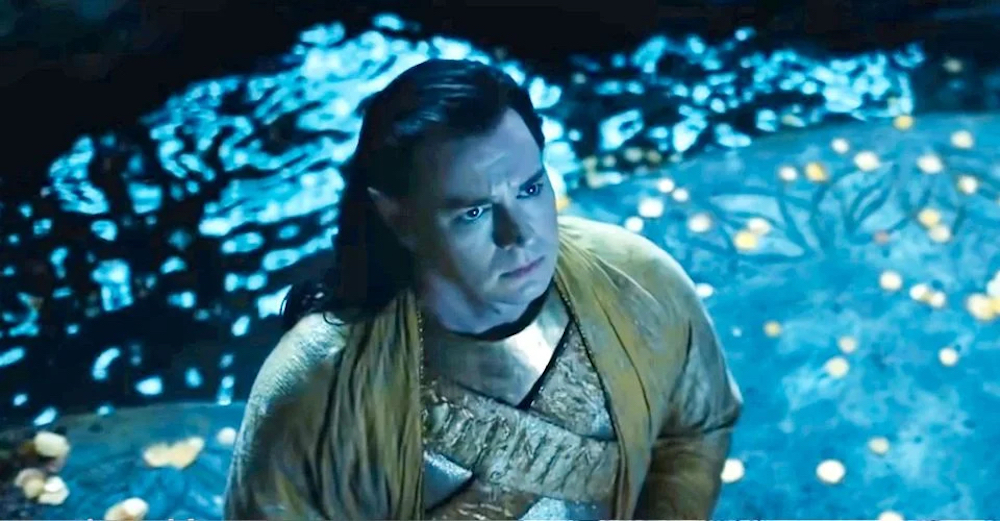 As the High King of Noldor, Gil-Galad plays a role in the upcoming series The Rings of Power, courtesy of Amazon Prime

The King of Lindon

After the sinking of his first kingdom, Gil-Galad established his reign in a new land called Lindon. While the Noldorin and Sindarin Elves alike settled in Lindon, Fëanor’s grandson Celebrimbor left to establish his own realm just West of the Misty Mountains. He founded the realm of Eregion very near the Dwarf kingdom of Khazad-dûm. And from there, some Elves also migrated East to Lothlórien. 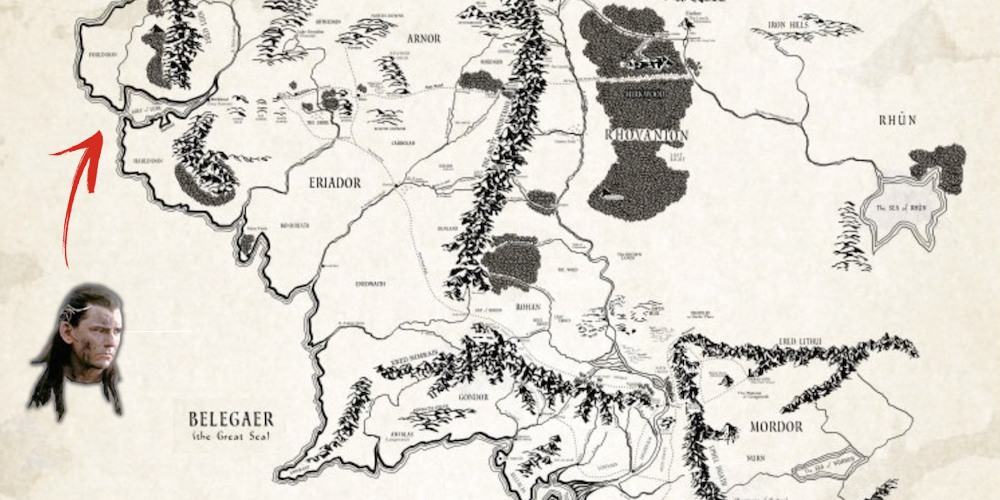 Gil-Galad was a wise diplomat, and established an alliance with Prince Aldarion of Númenor, the fallen city of man (spoilers) would also soon lay beneath the sea! He beseeched his new friend to pass a warning to his father, the King of Númenor. Something along the lines of “There be a big evil a-brewin’ in Middle Earth, beware!” And of course, he was right, and Tar Minastir sent troops to face the Dark Lord in battle.

The Forging of the Rings of Power

A few decades later, Sauron came knocking on the doors of the Elves disguised in the fair form of Annatar, “the Lord of Gifts”. Gil-Galad turned him away; he didn’t trust him. So Annatar moved on to Eregion. Celebrimbor was quite the craftsman and was seduced by the Dark Lord’s similar skills. Together they forged the Rings of Power. And yeah, they were all of them deceived, because Sauron made the One Ring full of cruelty, malice, etc.

When the three Elven rings were sent into hiding, Galadriel kept one, the ring of water, Nenya, with her in Lothlórien. And because he was heralded for his wisdom, Gil-Galad was responsible for protecting Vilya, the ring of air, and Narya, the ring of fire. He would eventually pass Vilya to Elrond and Narya to his lieutenant Círdan. Because a good leader knows when to delegate. 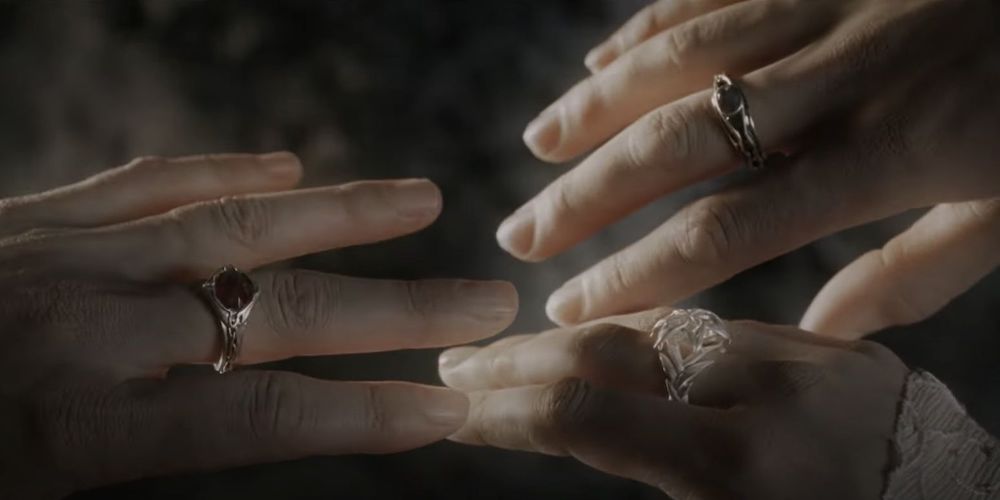 But Sauron’s power was still growing, so it was time for Gil-Galad to reach out to his Númenorian allies. With the help of King Al-Phazarôn, they were able to defeat Sauron’s armies. Al-Phazarôn later took The Deceiver home with him as a prisoner. But Sauron proved to be the trixiest party favor and swayed the Númenorian court to his favor.

Of course, this took quite a long time. And in the absence of Sauron’s military forces, Gil-Galad was able to extend his realm quite a bit. Once Númenor fell because (gasp!) it was Sauron all along, Númenorian nobleman Elendil and his sons established kingdoms in Gondor and Arnor. As a kingdom-warming gift, Gil-Galad had the White Towers built for them. 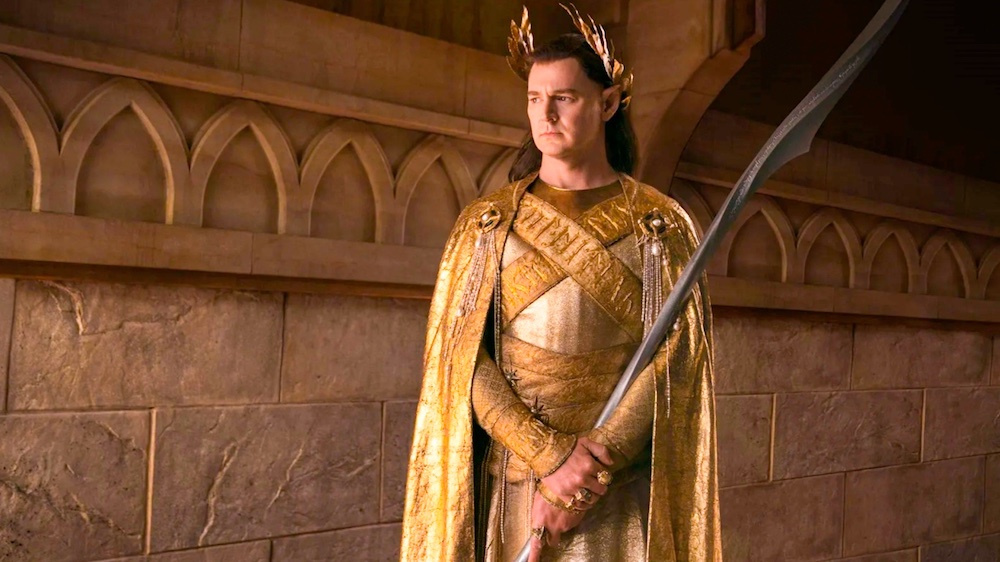 The Death of Gil-Galad

After gathering his strength for a while, Sauron made another move – this time attacking Gondor and Arnor. Sensing a need for a united front against Sauron, Gil-Galad and Elendil formed the Last Alliance of Elves and Men. After many years of training, their armies gathered at Amon Sûl. That’s a spot you may recognize – Frodo would later be stabbed with a Morgul blade by the Nazgûl at Amon Sûl.

Gil and Elendil’s armies marched and camped for literally years. They crossed the Misty Mountains, gathering allies as they went, including the army of Durin IX of Khazad-dûm. At last, they made it all the way to Mordor, and laid siege to the dark fortress Barad-dûr for seven years. Gil-Galad wielded his powerful spear Aeglos, known as “the icicle” in Sindarin. 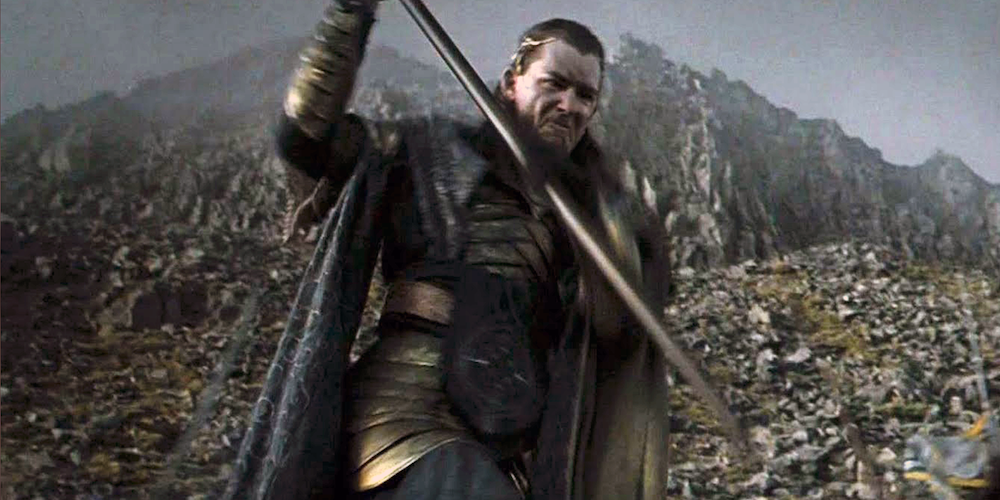 A battlefield full of Orcs f*cked around, and Gil-Galad is gonna make sure they find out. Courtesy of New Line Cinema.

Finally, Sauron himself stepped into the fray, and he dueled the two great leaders of Men and Elves. While Elendil and Gil-Galad fought valiantly, both were slain by the Dark Lord. Of course, Elendil and Gil-Galad’s deaths would not be in vain. After the death of his father, Isildur separated the One Ring from its master – along with Sauron’s whole hand.

'The Imperfects' - A Coming of Rage Story from Netflix 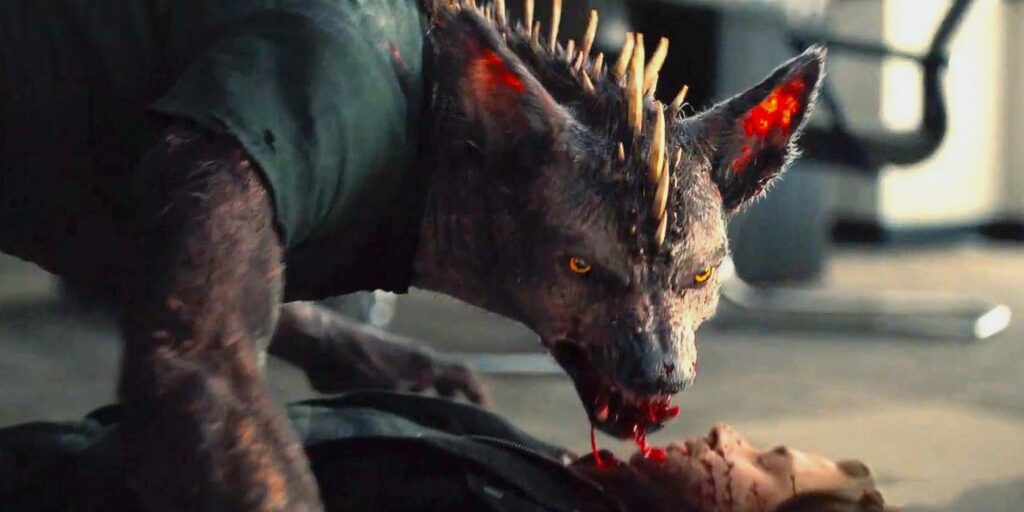