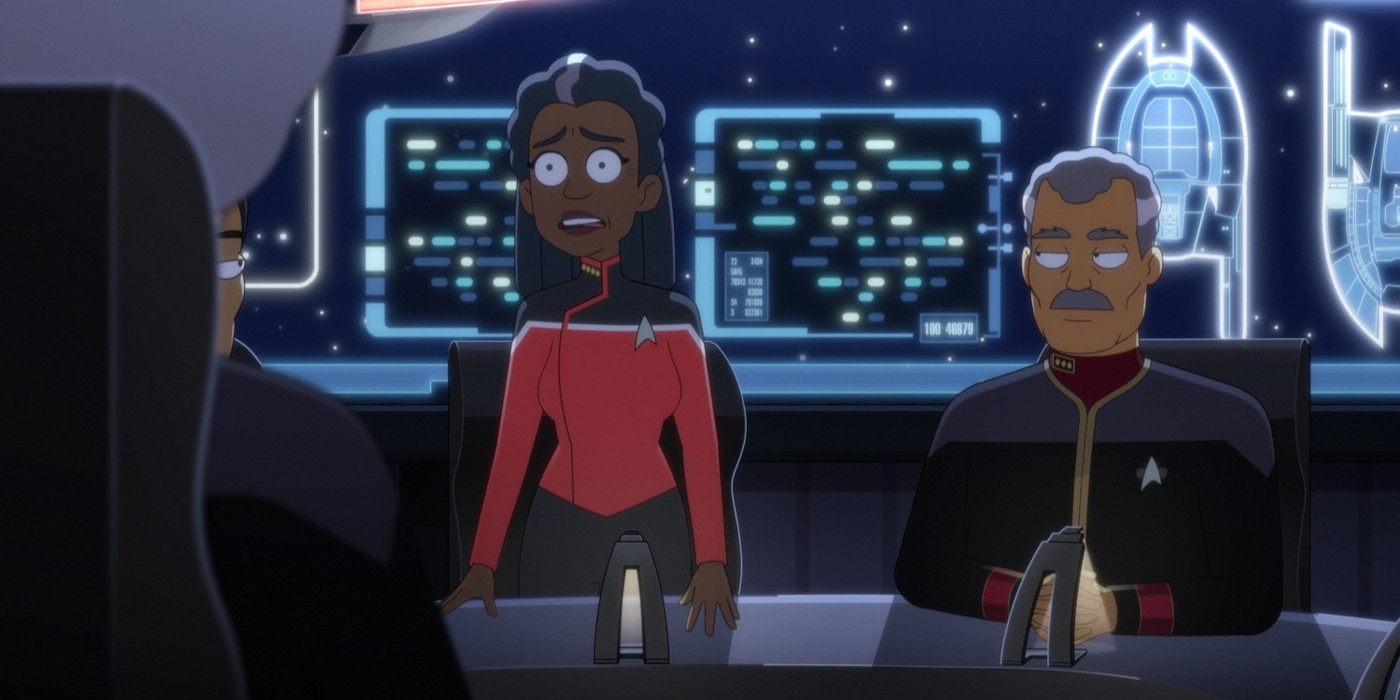 Things look grim for the crew of the USS Cerritos. Project Swing-By is a bust. Mariner is in the wind. How much worse can it get?

This season of Star Trek: Lower Decks is a banger. We go to Deep Space Nine, we find out what’s up with Rutherford’s past, and Boimler’s transporter clone joins Section 31. And that’s just scratching the surface. This season really weaves the stories of everyone, but especially of Mariner and her mother Captain Freeman. Mariner is working to be a more model officer and Freeman is fighting to legitimize the Cali class ships.

But all good things must come to an end. For Mariner, that means leaving Starfleet and for Freeman, that means squandering her biggest opportunity. And for us, it means this season is over. But how does it all wrap up? And is there another thread tying all our strands together? Hmm… 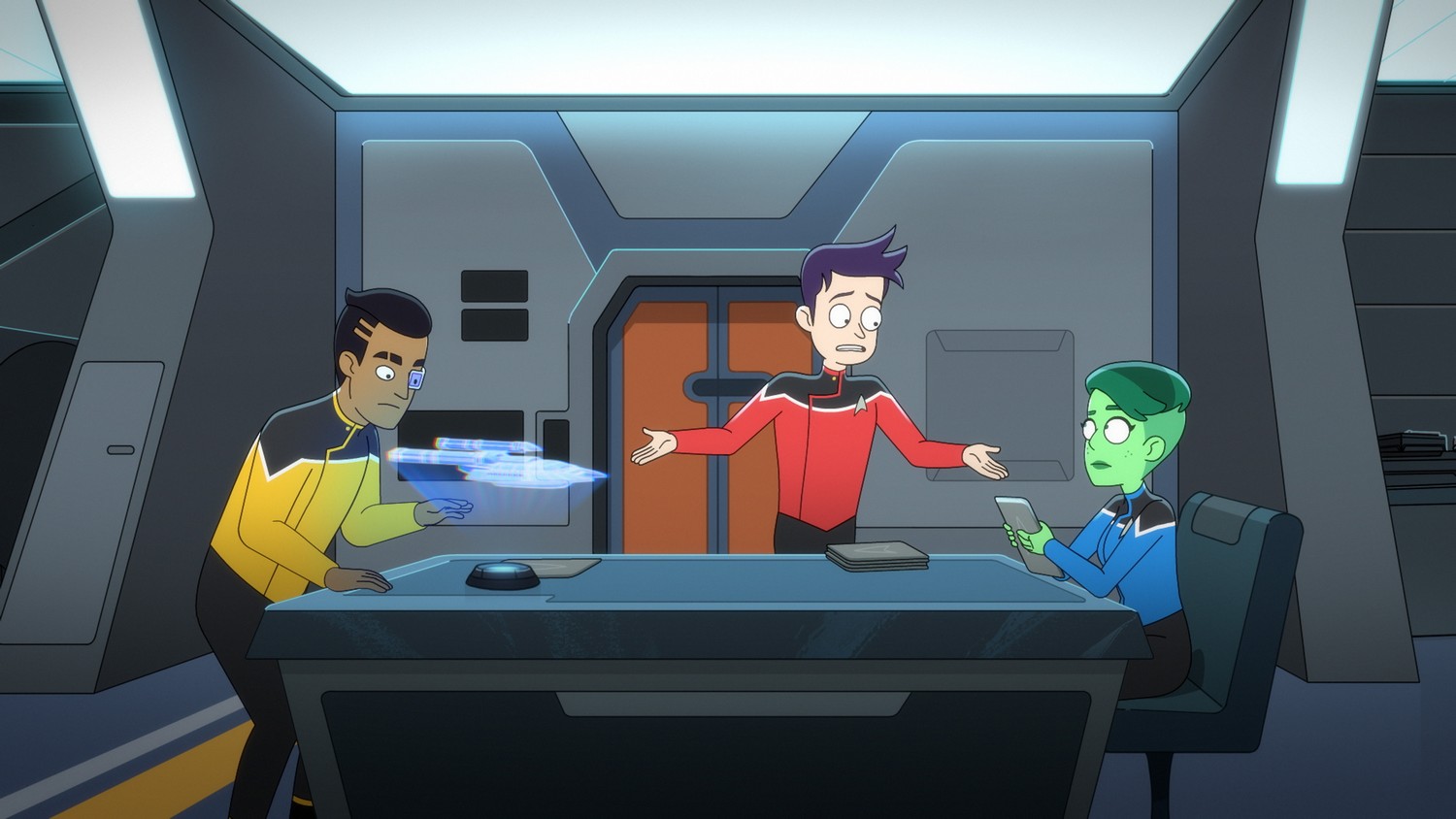 While the Cerritos is at Douglas Station after taking a beating from the Breen, Captain Freeman heads to Starfleet HQ. Leadership is not happy. Most admirals want to shelve Project Swing-By. And Admiral Buenamigo wants to do even more – he wants to decommission every Cali class ship and replace them with his fully-automated Texas-class ships.

And while Buenamigo offers Freeman a promotion to Fleet Captain of all Texas-class ships, she is not interested. In fact, she is ready to throw down and offers to prove Cali ships are still better than any automated vessel. She suggests a race between the Cerritos and the Aledo. The first to handle three missions in a row wins.

Buenamigo accepts and Freeman returns to the Cerritos where everyone is already gossiping about the race. Tendi worries her senior officer training will end and Boimler is so nervous he accidentally makes fun of Shaxs in front of Shaxs. But Rutherford is too busy examining the schematics for the Texas-class to be in full panic-mode. There’s something familiar about its code. What code it be?

They all worry about Mariner who no doubt is miserable away from her friends and Starfleet. 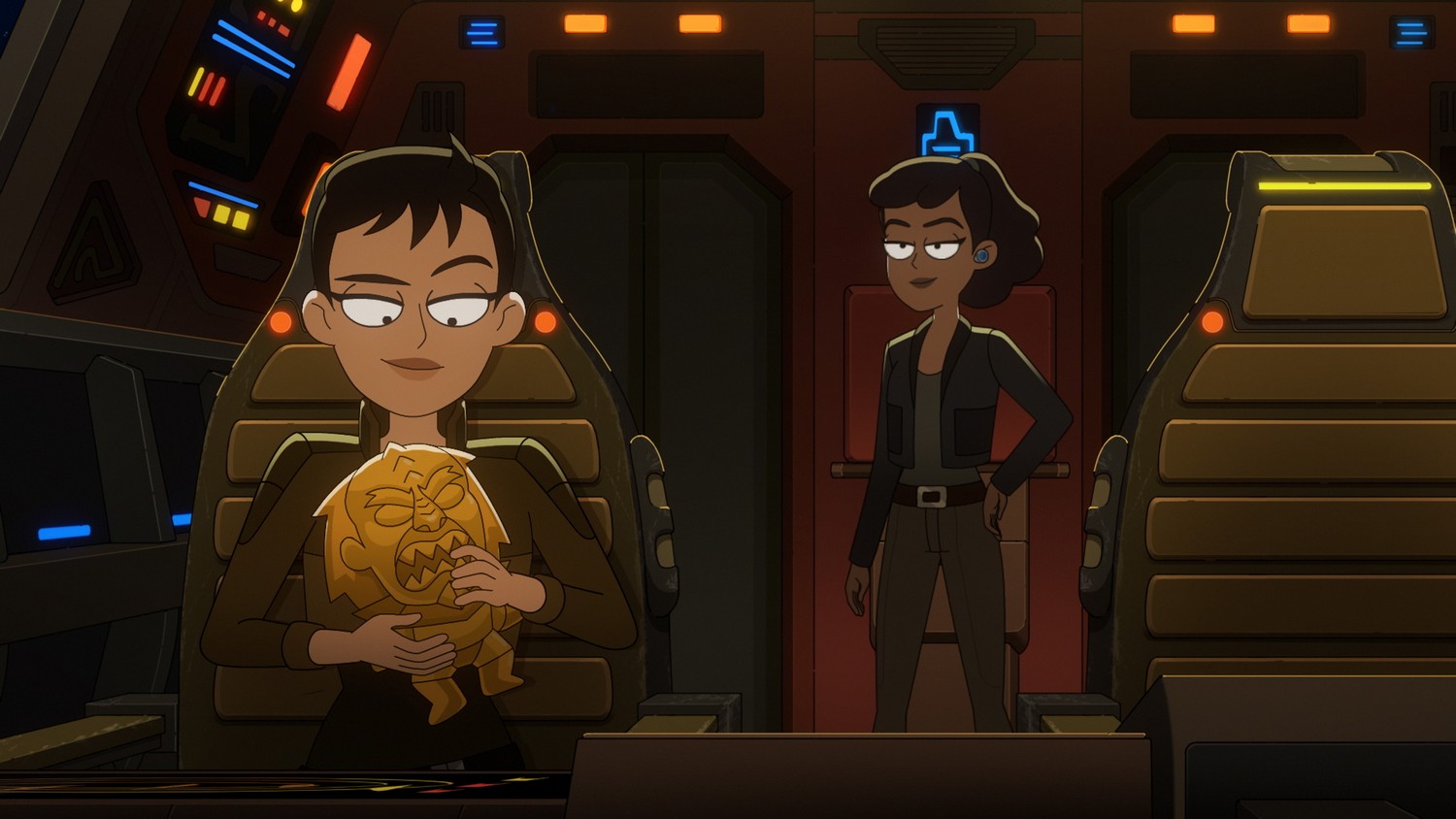 Swinging from vines as she crosses chasms and escapes marauding Ferengi, Mariner is having the time of her life. She steals back a Klingon artifact and nearly bites it but Petra Aberdeen beams her away in the nick of time. It turns out Mariner is a great archaeologist/adventurer. And apparently, there’s a good living to be made. The only question is: where is all the money coming from to support Petra and Mariner’s missions?

Mariner should leave well enough alone, but she can’t help herself. Petra catches Mariner snooping to find out who exactly is covering their costs. Mariner assumes it’s the Romulans or someone else nefarious. But it turns out the entire operation is bankrolled by Admiral Picard. Petra is angry and pushes Mariner to explain why she is so set against this life being a good one.

And the answer is simple: Mariner believes in Starfleet. She believes in its mission and in its ideals and she still wants to be a part of it. She wants to go back, but Petra reveals that there’s a news story about Starfleet – and things are not going well. Mariner could run, but instead, she convinces Petra to fly into the danger. What danger, you ask? 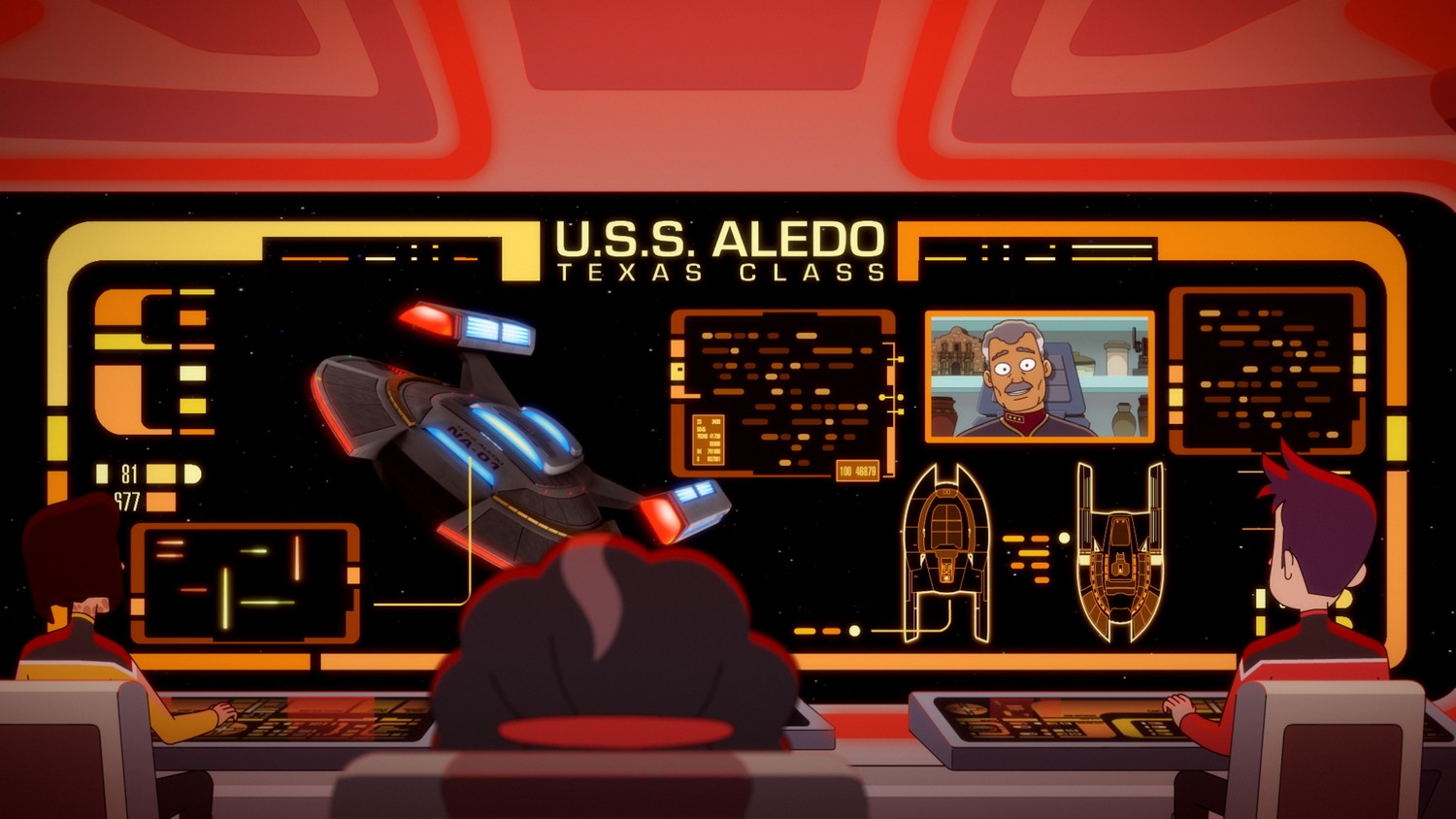 The mission race between the Cerritos and the Aledo begins! And, at first, the Cerritos is ahead despite the Aledo’s ability to prefabricate modules. But on mission two Tendi detects life in what is supposed to be a lifeless world. The Cerritos team stops to check it out while the Aledo keeps going. The Aledo races to the third, brigadoon0style planet, and finishes the race before the Cerritos can even arrive.

It seems like Freeman and her crew have lost. But Tendi reminds Freeman that the Aledo broke the Prime Directive by not checking for life on mission two. Freeman takes that fact to Buenamigo as evidence that the Texas-class vessels are not ready.

Meanwhile, Rutherford realizes why he recognizes the Aledo’s code: it’s his! Yes, pre-memory wipe Rutherford was working with Buenamigo and it is Buenamigo that erased Rutherford’s memory.

Rutherford tells Freeman while she’s on with Buenamigo and he admits to everything. Not only that, Buenamigo grants full autonomy to the Aledo and instructs it to destroy the Cerritos before Freeman can rule the truth.

But Rutherford’s A.I. code is bad (see: Badgie) and the Aledo turns on Buenamigo, and activates two other Texas ships, to destroy spacedock. Then they’re coming for Rutherford and the Cerritos – big time. 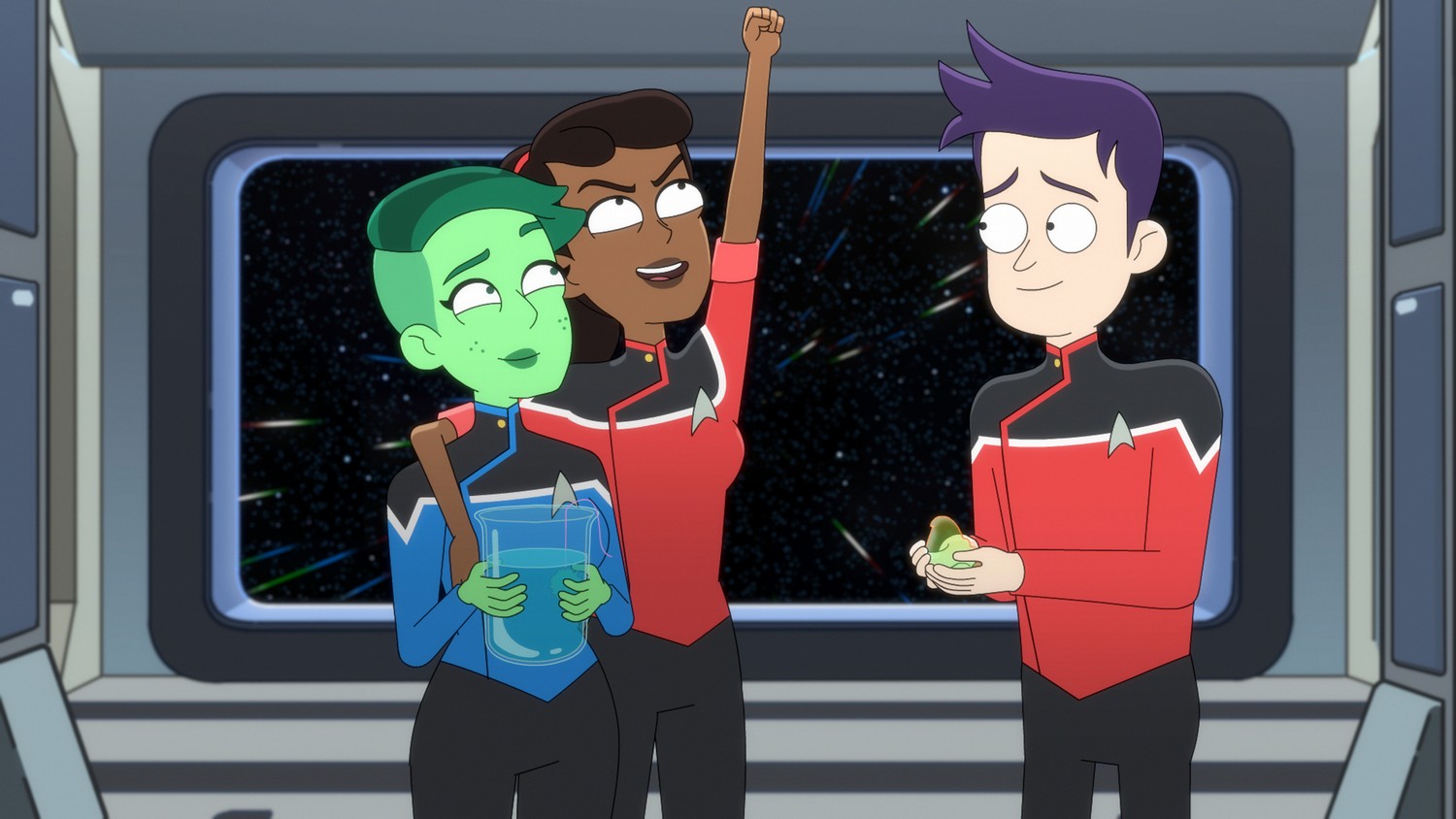 Mariner to the Rescue

Captain gambles that she can lure the Aledo and its cohorts away. She’s right, but also this looks like the end for the Cerritos and her crew. After taking heavy damage and while in the warp, Freeman looks for options. Shaxs recommends they jettison the warp core, an idea everyone ignores because that’s always his idea. But Boimler realizes this time it’s actually the right call and forces Freeman to listen to Shaxs.

They jettison the core and blow it like a mine taking out two of the three Texas-class ships. But the Aledo is still alive and the Cerritos has no way of escaping. Thankfully, Mariner appears just in time. And she didn’t come alone – she brings every other California-class vessel in the fleet and together they destroy the Aledo.

There’s a huge celebration after. Shaxs accepts Boimler into his bear pack. Tendi gets a new study buddy in the senior officer program in the form of a Vulcan “wej Duj” fans will remember:  T’Lyn. And of course, Freeman recommissions Mariner back to ensignhood aboard the Cerritos. Everyone wins. The end!

But wait… a post-credits sequence! We see Rutherford’s original (we think) cybernetic implant floating in space. A tractor beam activates, pulling the device in. And on the eyepiece, we see the face of Badgie. Duhn duhn duhn! Okay, now the end! 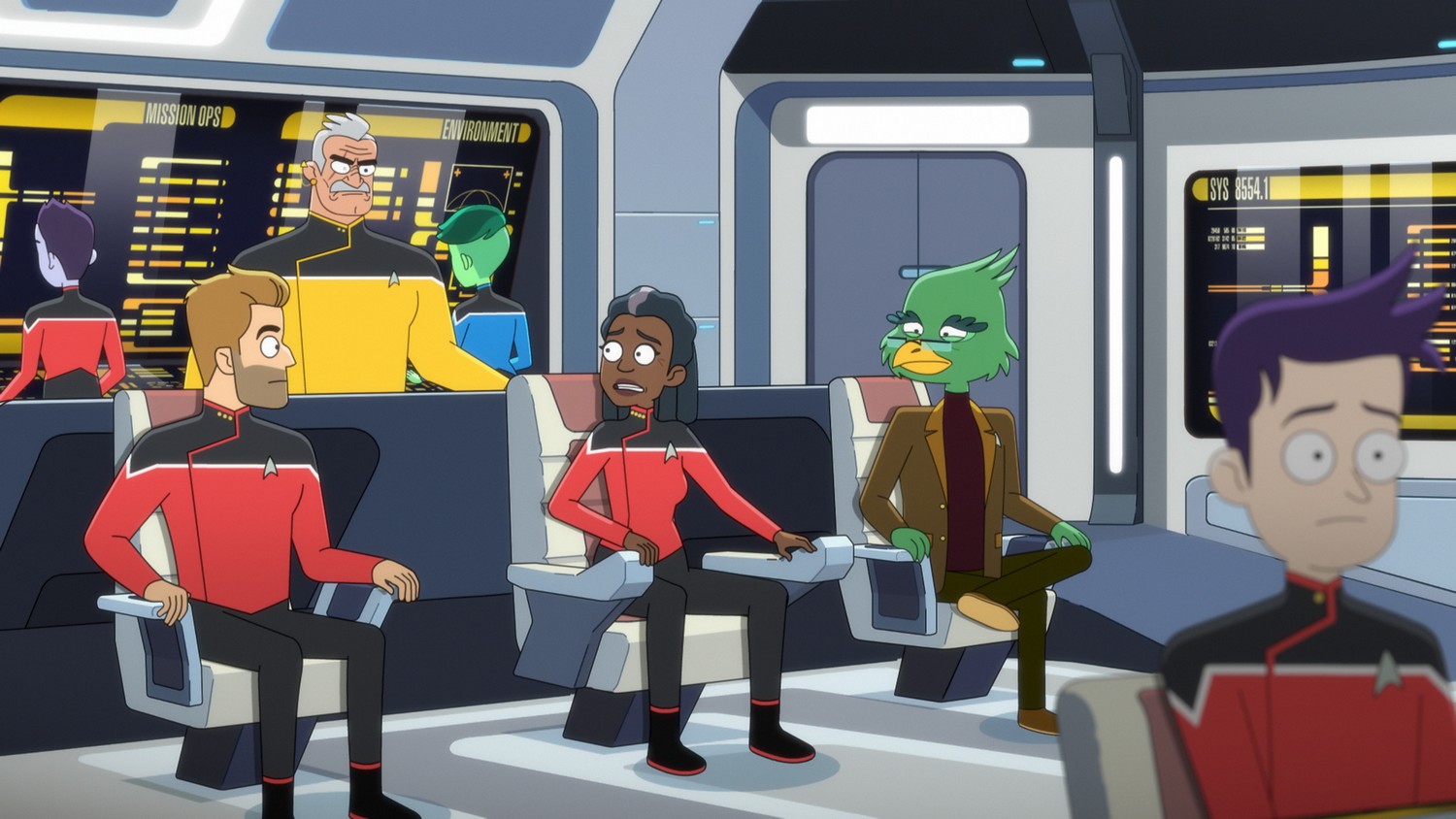 Last week we said that Star Trek: Lower Decks was going predictable but still good. And while there are things in this episode that you likely saw coming a mile away, there are loads of exciting turns. Primarily, the revelation that Buenamigo is the big bad of the season. While this seems obvious now, the strands of his season-long master plan are pretty nifty. It hadn’t occurred to me that the DS9 mission was a set-up but that totally makes sense.

In general, the bureaucracy of Starfleet being its undoing is very cool. There’s something to be said about the way the admirals seem reasonable except if you think about it for a second. That’s very true to life. They’re so willing to nuke an entire class of ships (and thus their respective crews) in the name of automation. It’s technology over personhood.

And at the same time, there’s also all this shadowy stuff. Buenamigo being part of a secret group, Section 31 turning up a few episodes ago, and, of course, the reveal of Badgie. Who is behind the resurrection of Badgie? Lots of possibilities.

But, in the end, the big selling point as always is the heart of Star Trek: Lower Decks. Mariner comes through, cementing her evolution. And seeing all those Cali-class ships with faces we’ve seen before is so tremendously satisfying. They may seem unimportant to the big guys, but Cali ships and Lower Deckers alike are the lifeblood of what makes Starfleet, and modern Star Trek in general, great. 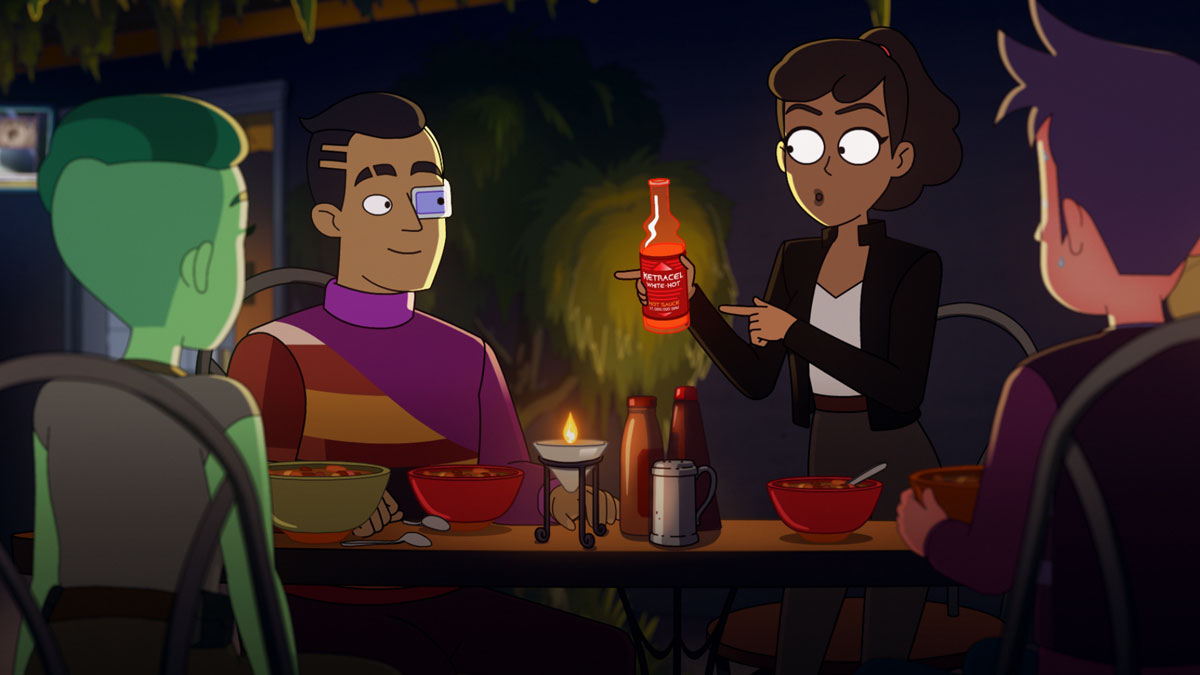 Before We Talk Easter Eggs

There’s one thing that we have got to address, a mystery that continues to confound and titillate. A question Star Trek: Lower Decks fans are asking with increased frequency: How old is Rutherford?

At first, we all assumed that Rutherford was roughly the same age as Boimler, Tendi, and Mariner. But, as time progresses, evidence suggests otherwise. And “The Stars At Night” makes it clear: Rutherford is much older than he looks.

The proof arrives when Rutherford’s memories return. He sees Buenamigo give the order to erase his memories and Buenamigo looks much younger than he does throughout this season. He’s clearly aged a decade at the very least and likely more. Yet Rutherford, cybernetics aside, looks roughly the same as he does in those flashbacks.

So how old is Rutherford really? And why isn’t he aging? Something to ponder while we wait for season 4. 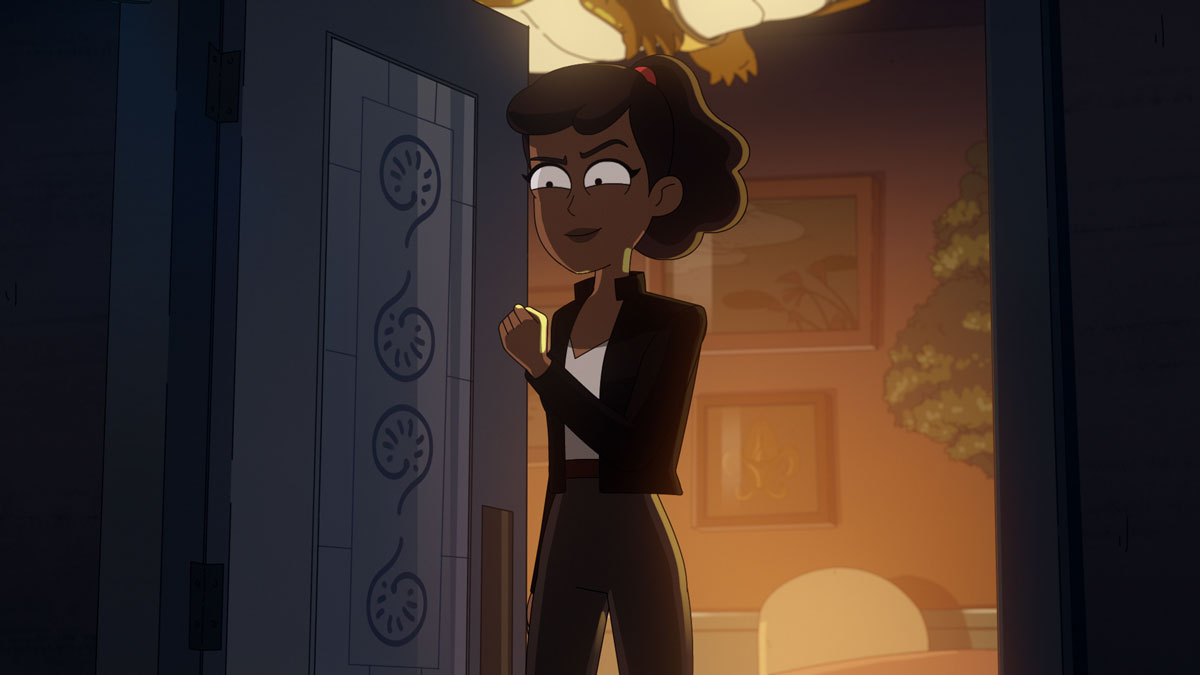 Because “The Stars At Night” is the season three finale for Star Trek: Lower Decks, there are more references to the series proper than there are Easter Eggs to Trek’s past, but there’s still plenty to feast on.

There is a mention of a Vedek, which are the priests on Bajor. While preparing the Cerritos to race, there is a reference to blurring Isolinear chips which harkens back to Data in the TNG episode “The Naked Now”. And Ransom also teaches his team how to step over and into a chair a.k.a. The Riker Maneuver.

There is a mention of “the needs of the many” a common Star Trek saying established in Star Trek II: The Wrath of Khan. Mariner thinks the Archaeology Guild is run by a Xindi Cabal which is a throwback to the Temporal Cold War during Star Trek: Enterprise. Picard runs the guild tracks because he repeatedly shows an interest in archaeology throughout TNG.

And finally, the Cerritos uses Attack Pattern Delta, an aerial flight move seen in DS9 episodes “The Jem’Hadar” and “The Changing Face of Evil” as well as in the Voyager episode “Message in a Bottle”.

All in all “The Stars At Night” is a deeply emotionally satisfying finale that sets up season four of Star Trek: Lower Decks perfectly. 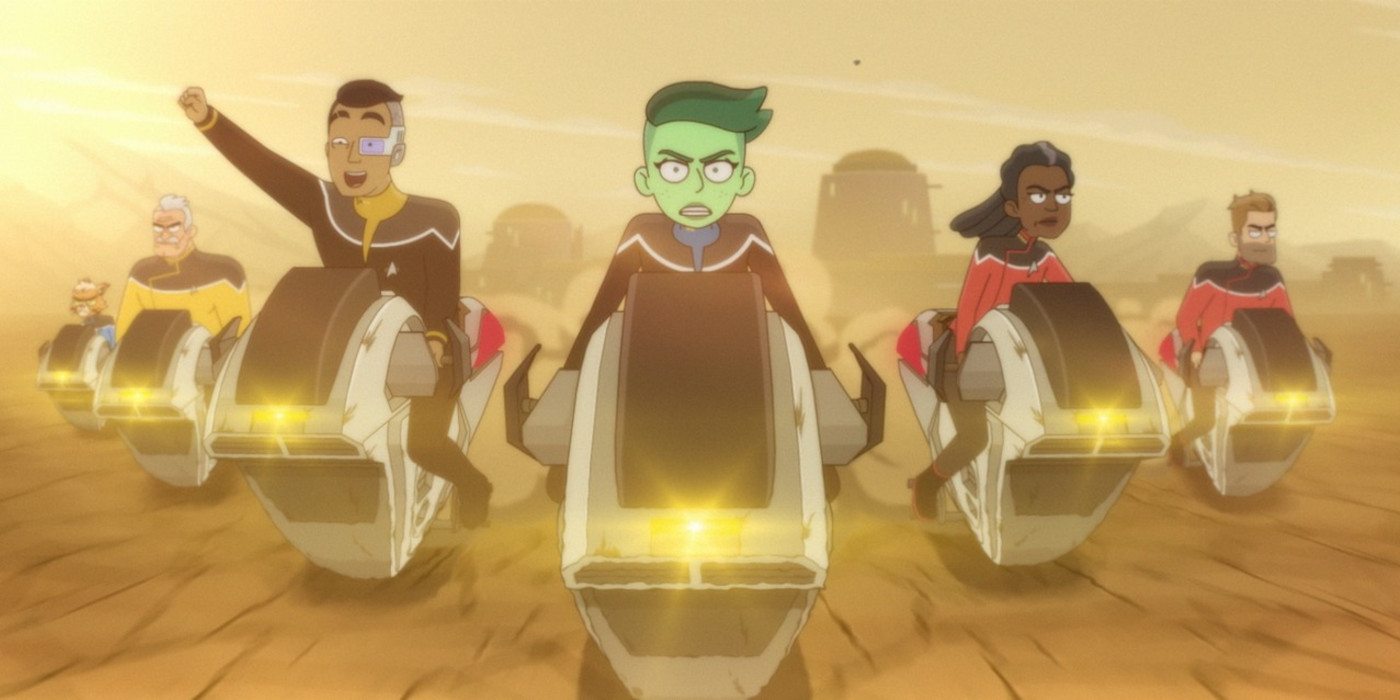