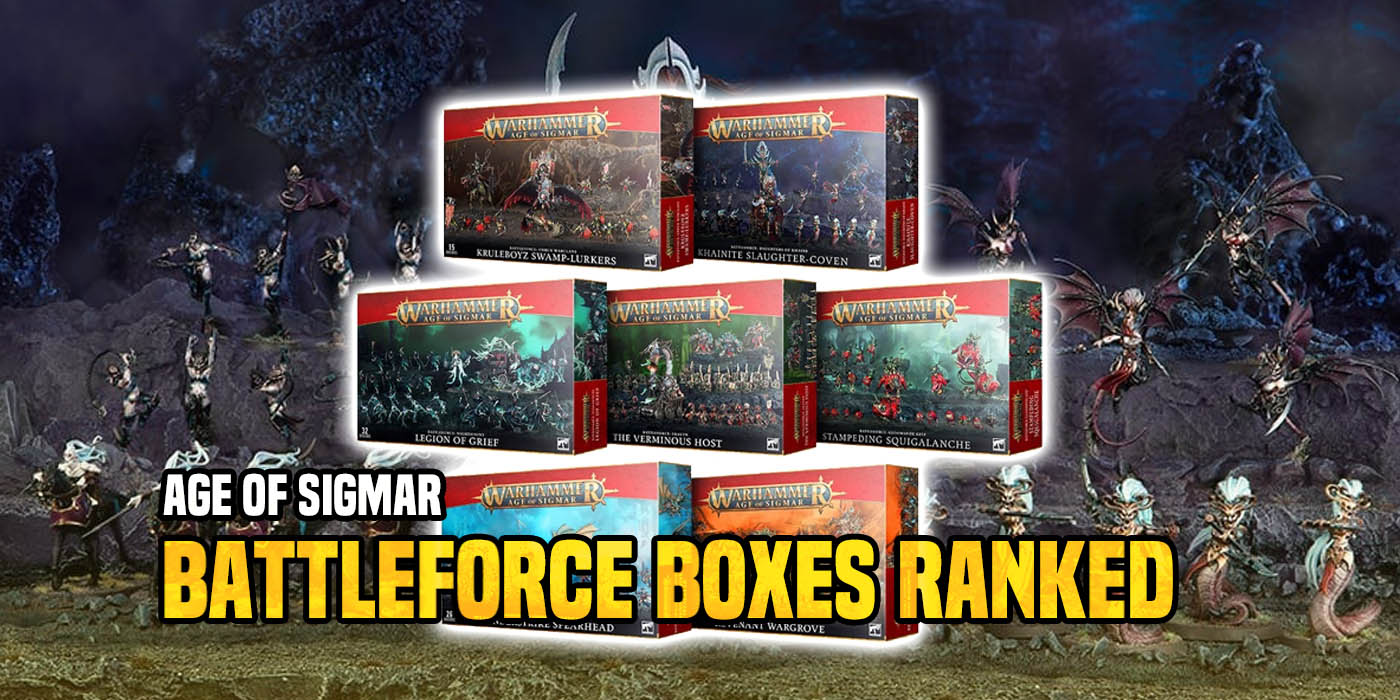 Games Workshop is releasing the Age of Sigmar Battleforces this weekend. It’s about time we ranked them in favorites order!

The Holiday Battleforce Boxes are always a good time of year for Warhammer fans. This year, GW is releasing 7 boxes for Age of Sigmar and, quite frankly, we’d be pleased if we got any of these under our Christmas Tree. However, there are some boxes we’d be more excited to see than other. We do have favorites — and they aren’t based on the current win/loss ratio from the Metawatch. Based purely on which ones get us most excited this is our list from least excited to most hyped. 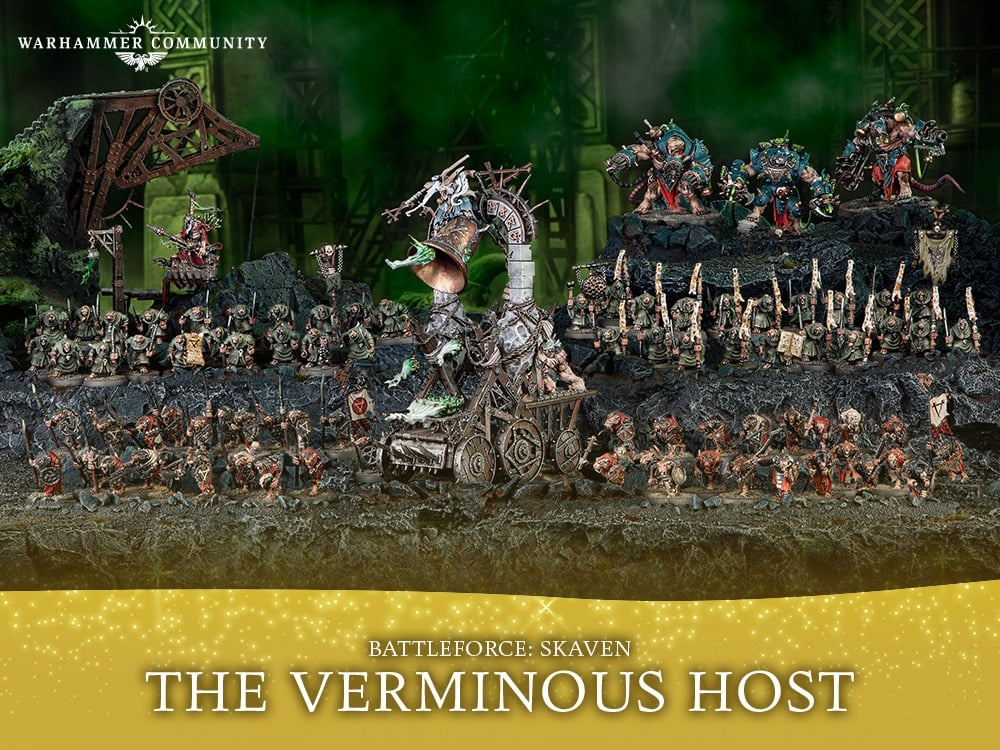 Again, this is actually a really strong core for a Skaven Army. Unfortunately, it just doesn’t get us that excited to play it. Part of the problem is that we’ve seen most of these models in many other boxes before. If you’re an existing Skaven player you’ve probably already got everything in here. And if you’re new, thematically, we’re not sure what this Battleforce is going for besides “here’s a lot of rats and some various support units” — it’s kind of a “mixed bag” vibe to us. At least you’ve got lots of room to expand. 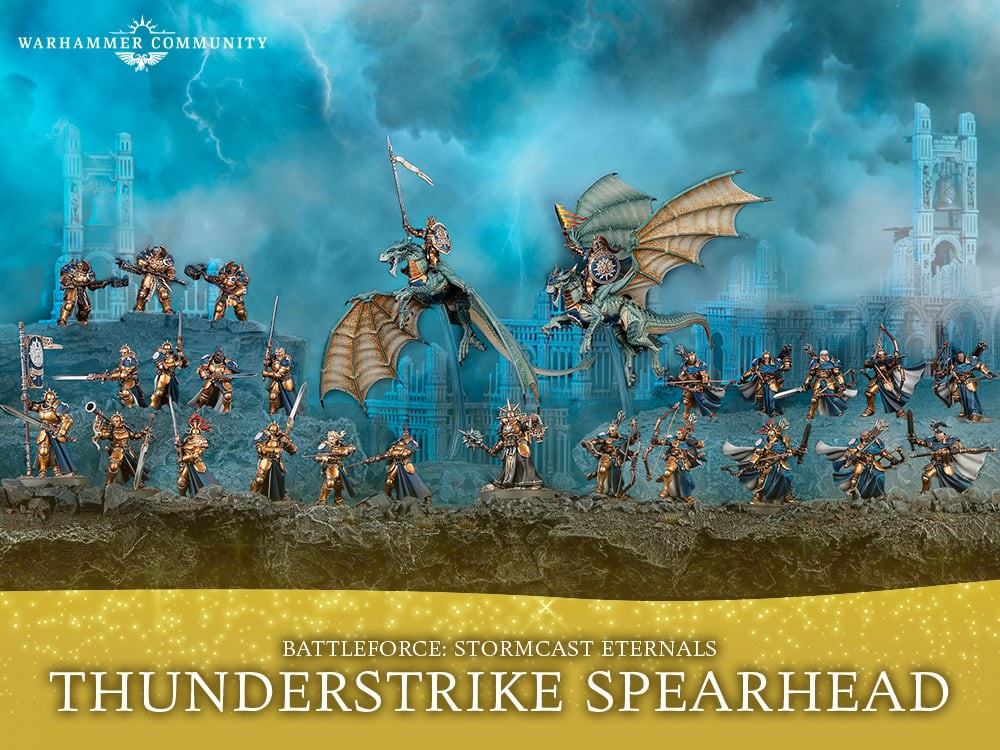 Here’s another example of “good core but lack of theme” in a Battlebox. It’s also Stormcast Eternals which we’re just not super excited to play. The good news is the Battletome is so massive you’ll be able to build pretty much whatever army you want. This box does have a good mix of stuff but it seems to lack a clear focus on a play style which makes it a tad bland for us to get pumped about. It’s an unseasoned “meat and potatoes” Battlebox — filling, but not all that flavorful. 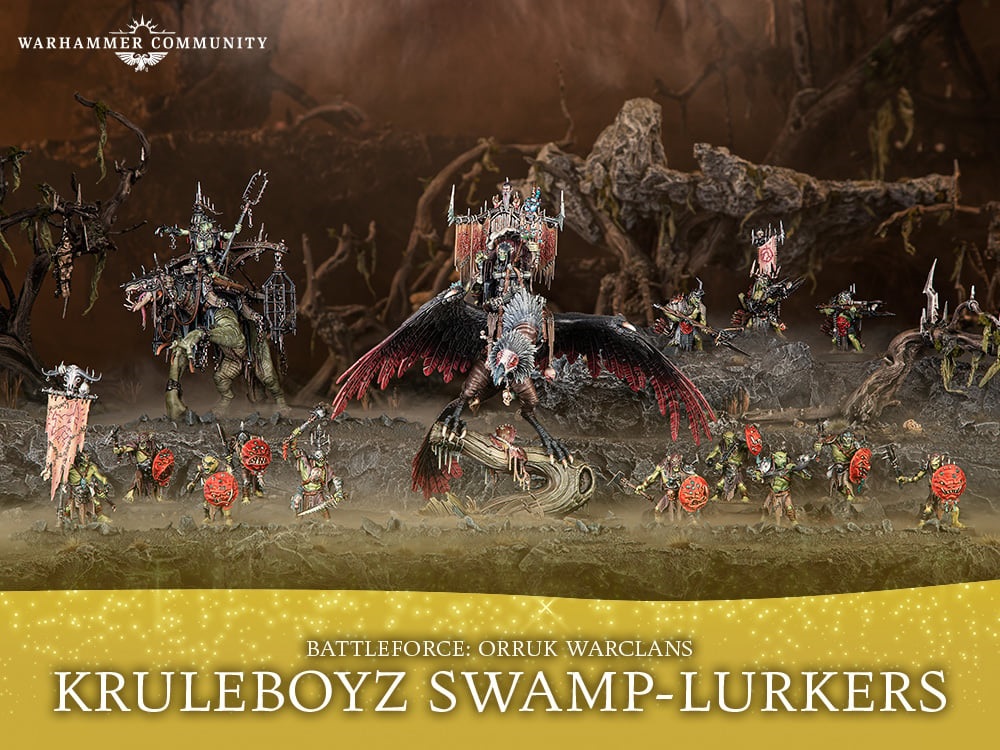 The Kruleboyz Battleforce has a numbers issue that makes us less excited about. It’s got two large models but feel a little light on everything else. At the same time those are two great looking “big model” kits. This is a Thanksgiving Dinner with a 20 pound Turkey and no stuffing: Impressive bird but no sides to accompany it.  If you’re going to pick this one up please pick up some more Kruleboyz to fill out the roster. 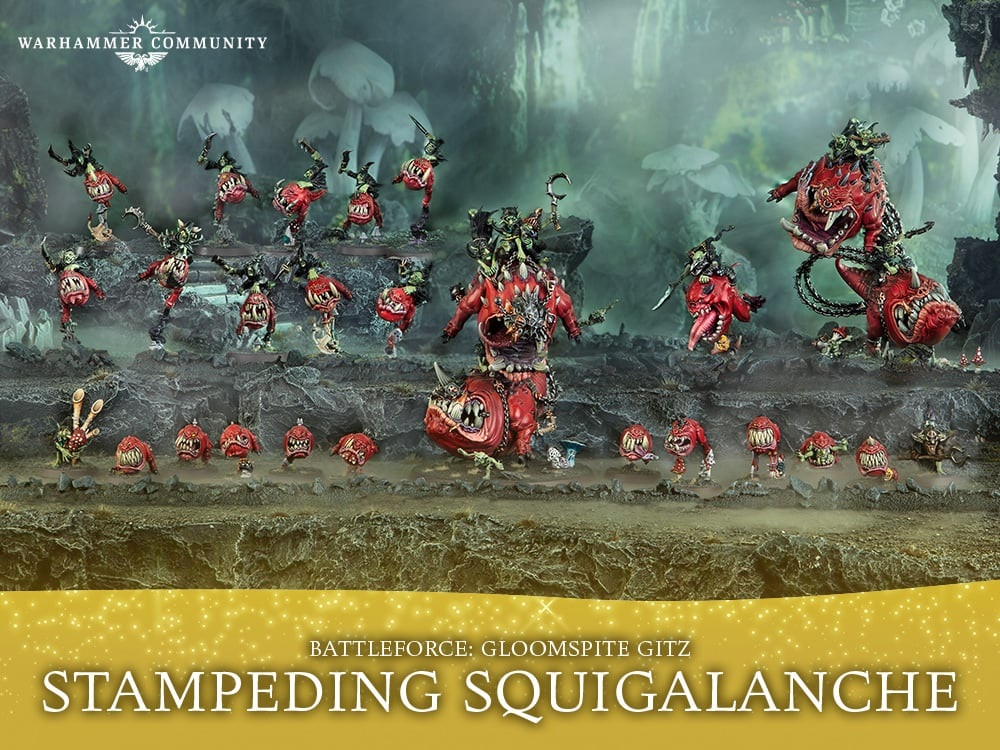 Okay, now we’re making the turn. The Stampeding Squigalanche is a good core of an army and a great theme! You can take one look at this box and know exactly what you’re supposed to do and that involves SQUIGS. You get two big kits, a hero, a bunch of Squig knights, and a Squig herd. There’s a clear focus here and we like it. 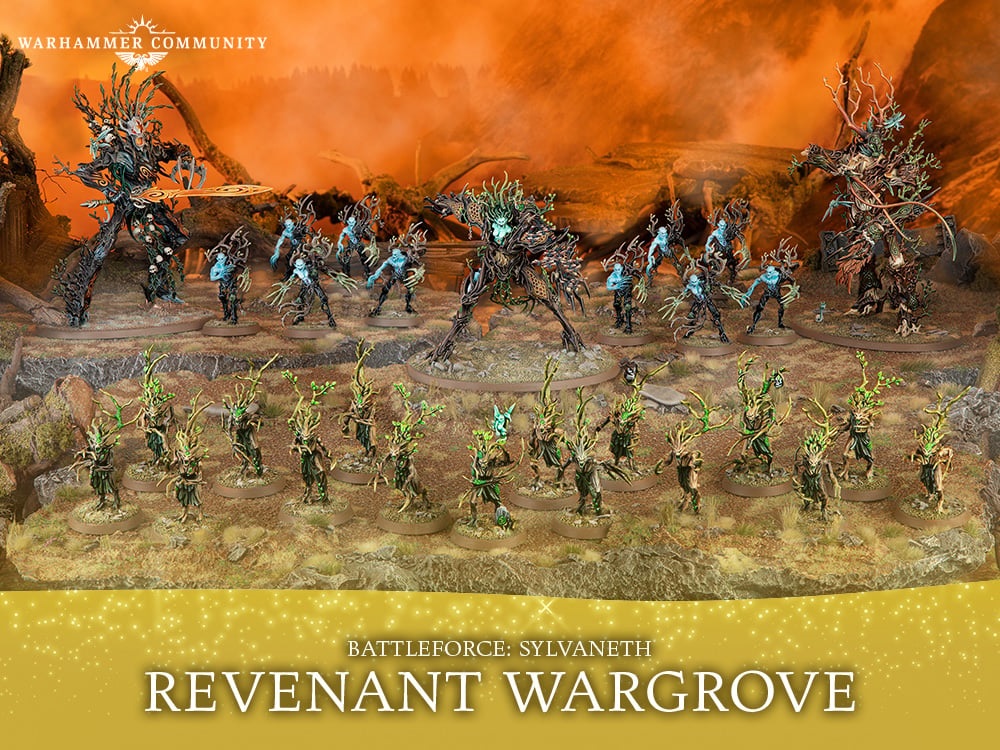 Heck yes, this a good start of a Sylvaneth army! Everything in this box is useful for a Sylvaneth player. The Treelords and Revenants are kits that can be built different ways and you actually get two Treelords. Drycha is a great character in the army. And if you eventually get an Alarielle, you can always use her to summon basically any one unit in to your game. So having extras of everything is fantastic. 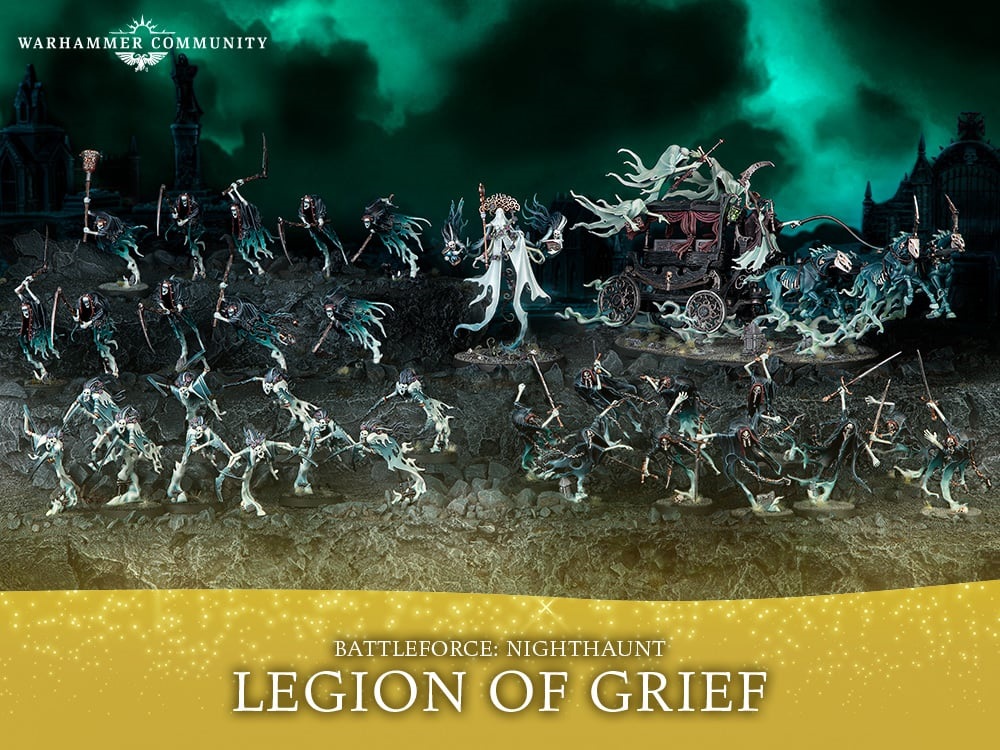 Alright this is a one-and-done army in a box if I’ve ever seen one. Key character? Check. Big centerpiece model? Coach check. Solid battleline options? Double check. Special harasser unit? Spooky check! As a Nighthaunt player myself I personally don’t need anything in this box because I have everything here already — but if I was looking to start a new army this battleforce would certainly have me on my way and I’d be excited about it. 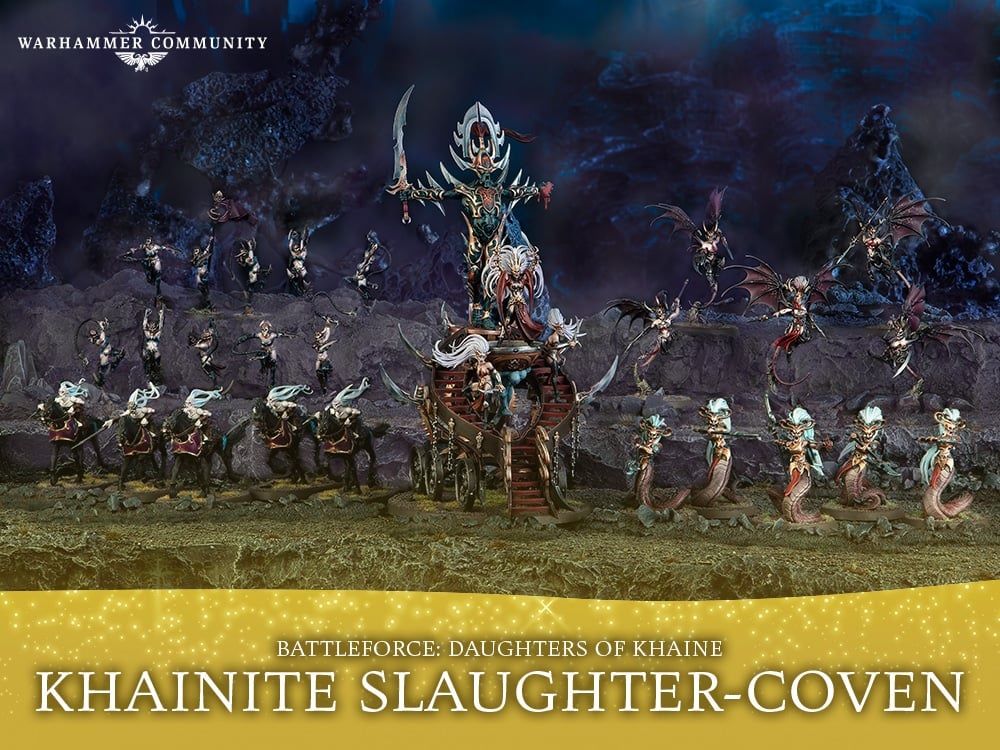 Holy crap this is an amazing box for a DoK army. Buy two! Everything in here is a dual purpose kit or can be built as a different unit — that means every model in here can be used to build the army you want. Plus, a bunch of the DoK characters are only available from the Cauldron of Blood. I play against a very good DoK player regularly and he has won various games because of every units in this box. Yes, even those Doomfire Warlocks managed to be useful as a screen or as a quick unit that could shoot out and snag objectives. The Khinerai have caused me lots of headaches because they can swoop in to snag an objective and have done so many times, too. And the Melusai and Sisters are just a constant threat of lots of damage output. If I had to pick just one box, it would absolutely be this one as the one I’d want under my Christmas Tree (and I’d probably still pre-order another one for myself). 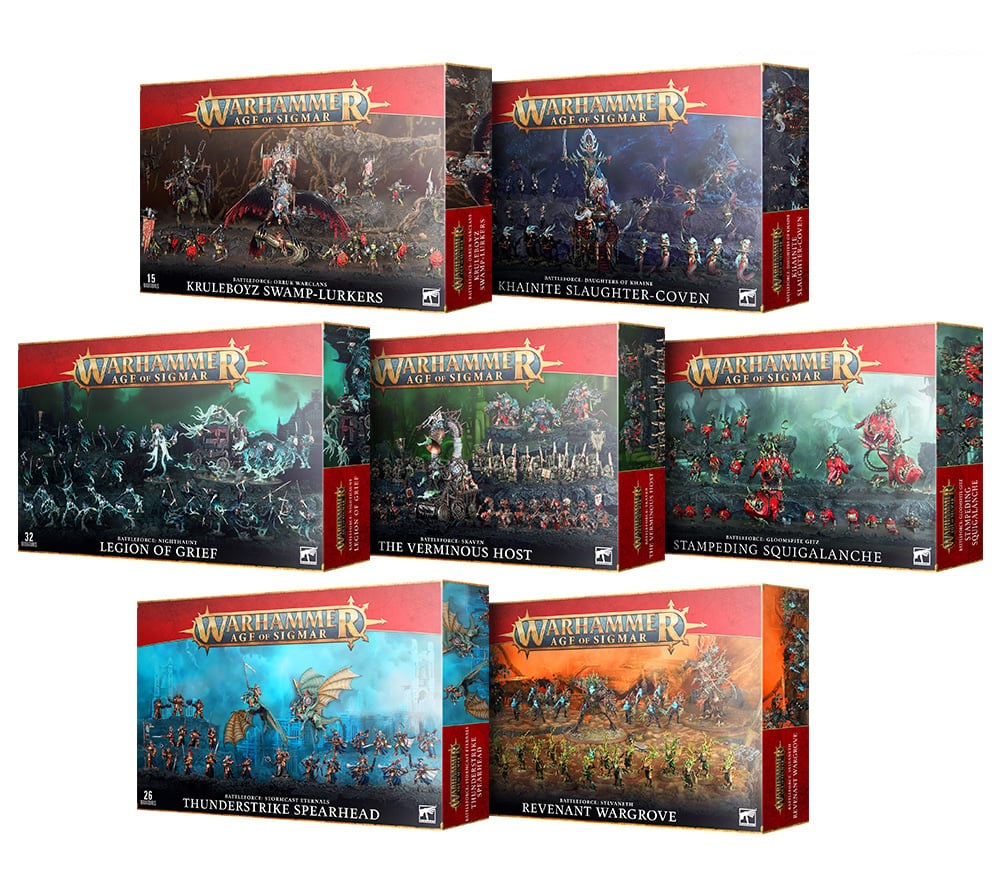 That’s our list from the Battleforce that get us least excited to MOST excited. Which Battleforce are you going to pick-up this weekend? 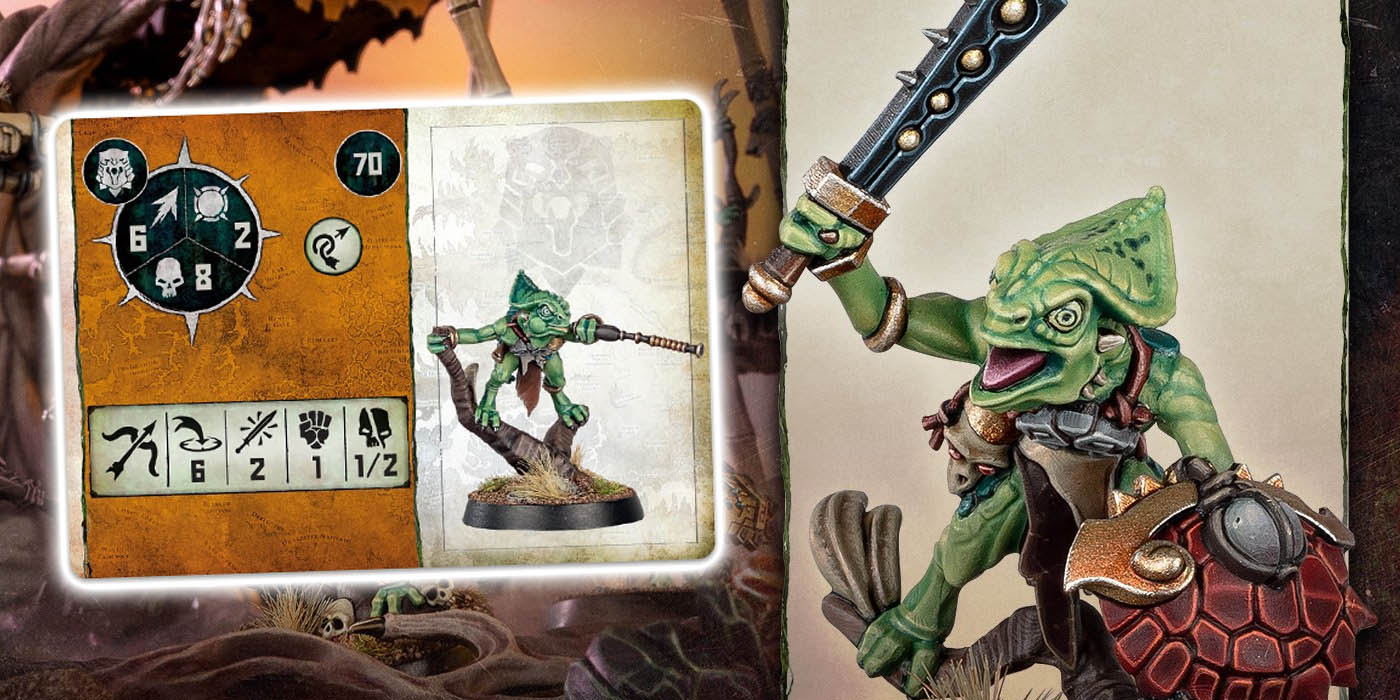