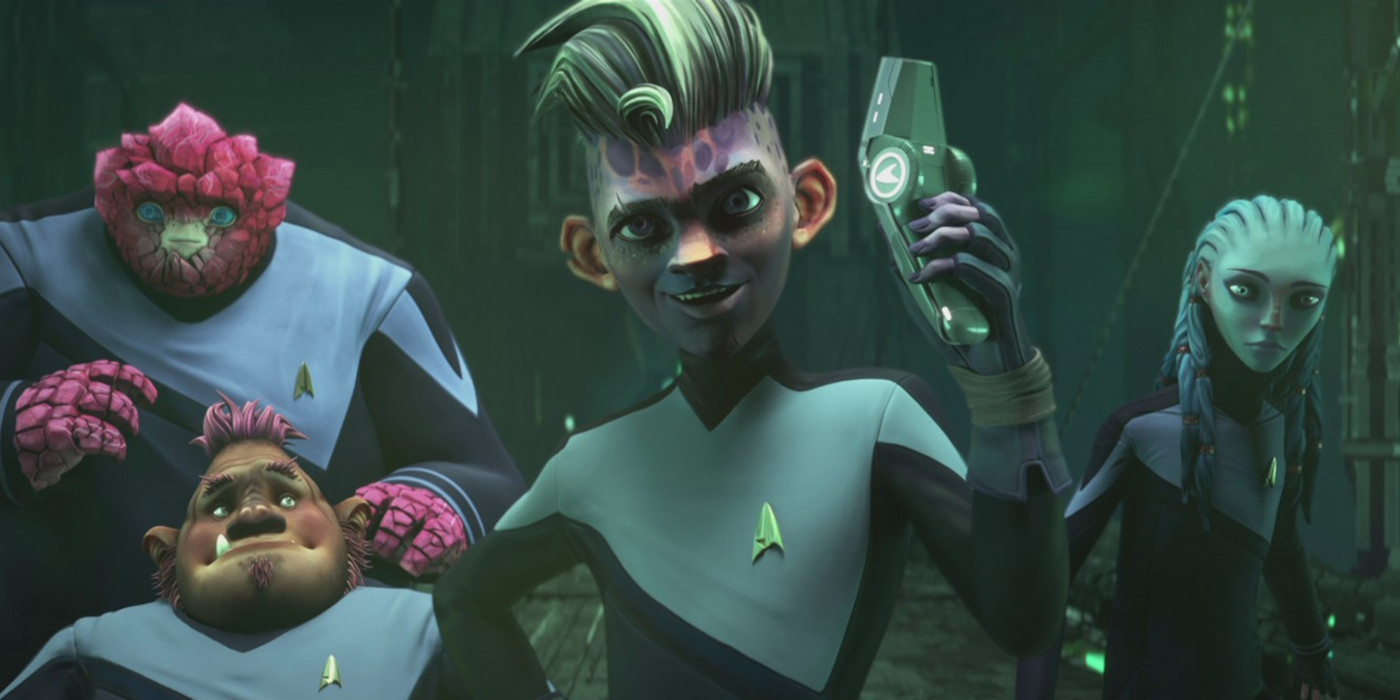 The Borg. The moment you see them, your life, as it has been, is already over. The Protostar crew is about to find out if resistance is futile.

Star Trek has a lot of iconic villains, even if they don’t remain villains forever. The Romulans, Klingons, the Founders, the Xindi, and on and on. The one thing they all have in common with our heroes is that they are, ultimately, individuals. And, on an individual level, reasoning can occur. Star Trek usually lives and dies by the idea that all people in the cosmos have more similarities than differences.

The Borg (at least up until very recently) are different. There is no real individual level. To be an individual is to be the opposite of the Borg. Because the Borg are an all-consuming hive mind, bent on assimilating the mind, body, and soul of everyone and everything they encounter. And you ain’t you without choice.

For decades the Borg have left Star Trek fans spellbound and horrified in equal measure. And in “Let Sleeping Borgs Lie” we find out how they impact the Protostar.

The Diviner left a weapon against the Federation on the Protostar. We know that and now the Protostar knows it, too, thanks to Gwyn’s memory returning. A quick search of the ship turns up a hidden passage that can only be opened by Gwyn’s Heirloom. In a secret subdeck, they discover what appears to be a living weapon.

Jankom tries to shoot it, but it moves around his weapon fire. And while Rok and Dal discuss different methods of disposal, Zero makes a plea for a more nuanced approach. After all, they can’t throw the weapon out of the airlock because then someone else will find it. And since “killing” isn’t an option, surely there must be a way to reason through the problem.

And that’s when a very bad idea presents itself in the form of a Borg Cube full of sleeping drones. Dal and company don’t know the Borg, but Hologram Janeway does. And she tells them to run immediately. After all, the Borg can adapt to any form of attack or defense, and beat any weapon.

But if they can beat any weapon, can’t they beat the one stashed on the Protostar? Can’t the team just beam aboard the Borg Cube, use their technology to figure out how to solve their sentient weapon problem, and hightail it out of there before the Borg wake up?

Of course, they can’t. But that won’t stop them from trying anyway!

The Borg sleep as our heroes make their way to the Borg’s central hub, the Vinculum. The good news is they arrive there safely, but the bad news is that the only way to interface with the device is to join the hive mind. And since Zero, as a Medusan, is the only one who’s already been part of a hive mind, they volunteer. But despite their best intentions, Zero is almost immediately seduced by the safety presented by the Borg hive mind.

The drones wake up and give chase. Gwyn is the only one to escape while the rest of the crew finds themselves dragged toward assimilation. Gwyn attempts a rescue but finds an interruption in the form of Borg Zero. She implores Zero to pull themself from the clutches of the Collective, reminding that Zero that they already have a collective in the Protostar crew.

Zero pulls themselves out of the hive mind, sending out an electromagnetic pulse that temporarily shuts down the drones nearby. The crew gets off the cube and escapes. Unfortunately, the only thing Zero learns from the hive mind about their weapon is that it cannot be destroyed. As a result, Dal decides the Protostar cannot return to Starfleet yet. They head off to investigate a nearby distress call instead.

Star Trek: Prodigy is a CGI animated series. They can portray an alien race like the Borg in any way that they want to. But rather than pushing the envelope and making the Borg more robotic than ever before, the series looks back. And it pays off big.

It’s funny looking back now. People joke about the original Borg design from the TNG episode “Q, Who” because of all the white pancake makeup, vacuum hoses, and holographic stickers. But you know what? That look worked back then and it still works now.

Think of it as the difference between the shambling Night of the Living Dead zombies and their sprinting, 28 Days Later era cousins. Sure, fast is scary. But it’s the slow inevitability that’ll really send a shiver up your spine. After all, death rarely runs at us directly – it just gains on us over time until it’s all over. Until we stop being who we are. Until we stop everything.

And that’s just the visuals of “Let Sleeping Borg Lie”! In fact, that’s just one aspect of the visuals. We’ve never “seen” the Borg consciousness until now and there’s something beautiful about it. Something alluring that makes Zero’s brief heel turn understandable. Speaking of which…

“Let Sleeping Borg Lie” is, above all, a Zero episode of Star Trek: Prodigy. It begins with Zero’s ongoing guilt over nearly driving Gwyn insane earlier in the season. And we see their desire for understanding through how they deal with the Diviner’s living weapon. After all, isn’t Zero a weapon of a sort? If they want to be redeemable, don’t they have to entertain the possibility that this weapon, too, can be turned to the side of good?

But no one else sees the weapon that way. Everyone else wants to destroy it or toss it out an airlock. And that’s what Zero fears the crew wants for them as well. Heck, that’s how Zero views themselves sometimes.

And that’s why the Borg are so alluring to Zero. The Borg do not flinch at Zero’s appearance. In fact, the Borg see a value in Zero. Of course, that value is in Zero as spare parts rather than as a person, but it takes Zero times to work that part out.

Star Trek: Prodigy (like all Trek shows) is beloved by outsiders. And outsiders are often taken in by cultish groups with easy answers. The Proud Boys. The Gender Critical movement. QAnon. It’s easy when you feel alone to be fashioned into a weapon by the big groupthink. And that’s what the Borg are in the end. Just a group that simply tells us what to think, who to be, and who uses us as pawns for the destruction of everyone who isn’t Borg else until nothing is left but Borg.

Zero is a nonbinary person without a home. They were part of a group mind, but they don’t have one anymore. It’s like Zero lost their family and they aren’t sure if they’ll ever find that feeling of safety ever again. The crew of the Protostar can be a found family, but there’s a challenge there. And if no one is really listening to Zero, they can be lost to something like the Borg.

Thankfully Gwyn, who arguably is the person most harmed by Zero in the first, does listen. And she reminds Zero that they have a collective, a family, with the crew of the Protostar. The Protostar, like all great Starfleet crews, is awash with totally different kinds of species and individuals. And when it counts, they listen to each other. They value each other’s differences.

And they do not take the Borg for anything other than what they are: a threat to individuality and to life itself. Never let sleeping Borgs lie. Because the Borg may sleep, but they never sleep for long.

They are not a lot of Easter eggs in this episode of  Star Trek: Prodigy aside from the obvious ones. The Borg look like their original incarnations in the TNG episode “Q, Who”. The Borg Vinculum makes its first appearance in the Star Trek: Voyager series finale “Endgame”.

There is one other reference to “Endgame”. The reason the Borg Cube in “Let Sleeping Borg Lie” is “asleep” is because of a neurolytic pathogen. That is how alt-future Admiral Janeway fights the Borg in “Endgame”.

Also, current Admiral Janeway drinks tea, not coffee. And if there’s one thing all Janeway fans know, it’s that Janeway loves coffee more than life itself.

All in all, this is one of the best uses of the Borg since the TNG episode “I, Borg”.

'Black Adam' Review - One of Us 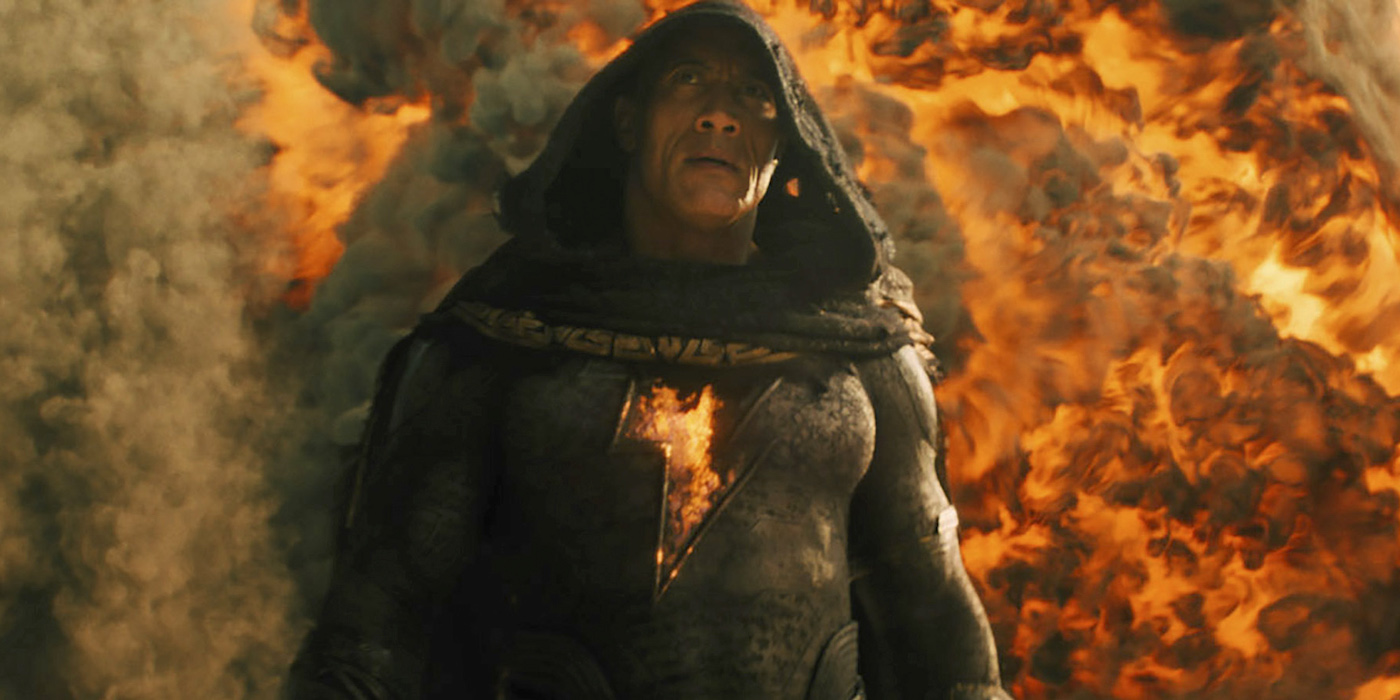