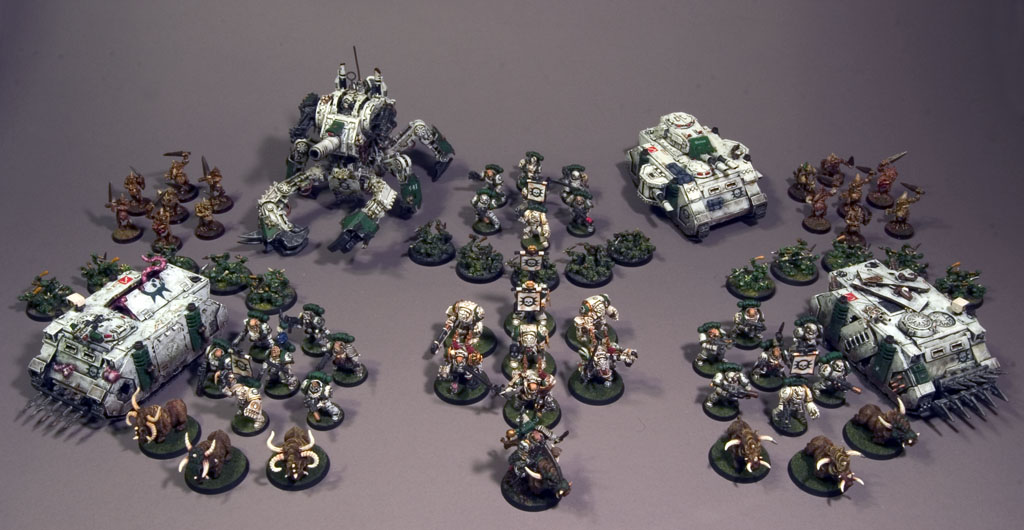 I’m a big fan of the following “mixed-flex” CSM Death Guard army, that can adapt to a lot of situations. It’s been tearing a path through my local club lately.

Notes: The hounds allow the Rhino units to count as 10-man units making them much harder to break victory-point-wise. All Plaguemarine/Chosen squads have iconbearers.
————————————-

Deployment:
The 2 Rhino squads deploy out of LoS, with troops embarked. The Defiler and Predator deploy near each other in area terrain to lay down supporting fire on enemy armour. The Lord and Infiltration squad deploy as close to a concentration of enemy infantry as possible. Nurglings deploy in the open along a wide front to deny enemy infiltrators access to my backfield.

Tactics:
The rhinos speed towards the enemy lines and pop smoke and disembark. Lord charges on turn one and ties down a flank of enemy infantry. The Defiler and Predator hunker down and get into a slugging match with enemy armor and hopefully draw fire away from my infantry. The nurgling run totally exposed in a beeline for enemy infantry (especially firepower units like devastator squads).

The goal is to distract the enemy heavy weapons with a slugging match against my two tanks (who are both AV:13 Front and ignore stunned and shaken) one of which has a battlecannon, while the other has triple las-cannons. Each is a decent threat. The nurglings who cannot count as victory points throw their lives away to draw fire from elite enemy units. If any survive, they will throw themselves into assault with units already being hit by the Plaguemarine units. It is here that Nurglings truly shine, as their high Wound count quickly throws the enemy into the very bad 3:1 or 4:1 outnumbered range with often disasterous results.

The Plaguemarines, approach on foot and advancing behind their rhinos, close and assault the enemy. They pull down the Plaguebearers as needed to hit the enemy first and tie them down to approach more safely.

The Lord and the Infiltration Plaguemarines homer the terminators down right next to them to put a horrificly powerful unit accurately in the enemy backfield.

Normally by late-game, its just mop-up operations. If the Nurgle army is not decisively mauled by the end of turn 2, its over is it just keeps summoning/teleporting more and more nastiness down onto itself and directly into the enemy lines. The enemy is routinely having to resolve up to 5-6 assaults per round as the entire army wraps him up in assault and grinds him down with that T:5 resiliancy and the Rot.