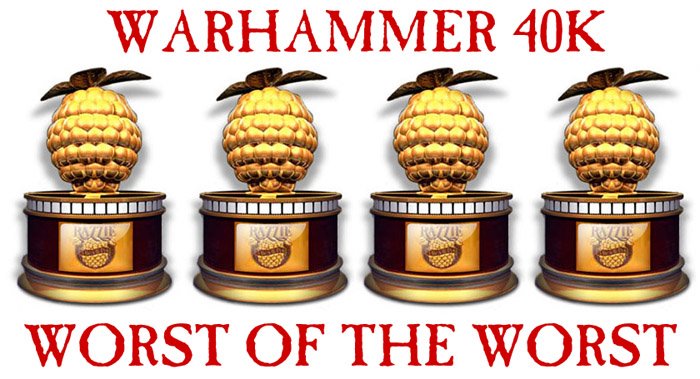 9) Blood Angels – Blood Angels can concentrate their forces to be better than Black Templars in one small area of the board. The problem is, you really have to pack the Blood Angels in to make the most of Dante’s Aura of Win, and that makes them very vulnerable to Battle Cannons and other very bad things. It also means that the enemy only has to avoid one knot of destruction until it is pounded to dust.

10) Dark Eldar – These guys can pull off a win against any force, and really do hand Nidzilla a bucket of pain. I just don’t have enough experience with them in Fifth to have a lot of respect for an army that my lifetime record is entirely lopsided against, but I’m grabbing a Dark Eldar army soon, so we’ll see what I have to say about these guys in 6 months.

11) Witchhunters – Acts of Faith are just plain cheating in a prescribed manner, and can do a lot to change the course of a game, if used well. The significant reduction of the Exorcist’s ability to destroy AV 14 means that the girls are expected to use Melta against Landraiders full of very bad men, instead of on the men themselves, which makes them less effective. It doesn’t take an overwhelming amount of firepower to kill half a dozen AV 11 transports, and then the Sisters are using their faith up to stay alive.

12) Space Wolves – Space Wolves? I almost forget about the Space Wolves – Fourth Edition saw these guys fade from glory for most local players, and having a phantom Codex means no new players pick them up. Space Wolves suffer from downsides in Fifth Edition (TLOS makes them more shootable, outflanking makes Wolf Scouts less unique) and get very few upsides. The end of Blood Claw Rhino rushes was the end of a Golden Age for these guys. Still a strong army in close combat, they would probably be higher on my list if I saw them more often.

13) Tau – Wow, did Tau vehicles get a huge relative boost to survivability in Fifth Edition. That said, the Tau are incredibly vulnerable to fast or outflanking assaulters and deepstriking or outflanking shooters. Which means every Marine, Guard, and Ork army that exists locally. Tau can still win, but their gunlines and crisis suits are far more vulnerable in Fifth Edition than they were in Fourth, and their vehicles don’t have the firepower to stop any army’s infantry.

14) Dark Angels – Dark Angels have the coolest scoring unit rules and some of the most interesting special army builds in the game. The only problem is they’re worse in every other way than every other Marine force, and thus really great models with really great fluff are now successor chapters that play as normal Space Marines. Having 26 scoring units doesn’t help when they’re all dead.

15) Daemonhunters – You would think with the addition of an entire Codex of Daemons added these guy would be better, but you’d be wrong. Grey Knights are such wonderful models and I do really love to have them on the field, but a small Power Armor GK squad costs as much as a Leman Russ Battle Tank, with neither the survivability or killing power of the tank. The bright spots are the Inquisitor with Mystics that seems to find space in my roster (riding on the rear running boards of my Leman Russ Demolisher) and the still effective Force Weapon of the horribly expensive GK Grand Master. 200 points gets you 10 wounds of Bloodcrushers or 4 wounds of GK Terminators. Guess which is more maneuverable, has more attacks, and wins every time?

16) Necrons – What’s worse than being expensive and ineffective in close assault? Being expensive and ineffective in close assault AND requiring large unit sizes to maximize the benefits of your special abilities. The new assault rules, the new vehicle damage table, the reduced penalty for hitting skimmers in close combat, run and outflank all turn the happy robots into the basement of 40K. Necrons are the only army that got worse in every phase of the game for all their major units (though Flayed Ones and C’tan are at least arguably better).

Closing Thoughts
And a couple of closing remarks. I’ve recently started playing Warhammer Fantasy as well as 40K, and the balance in 40K is a lot tighter than in Fantasy. I would not recommend that a new player start a bottom half army, but I don’t think there is anything wrong with any army in 40K that skill and practice can’t at least partially mitigate.

Also reading comments and looking at armies other people play successfully, I can’t help but wonder if there is a whole lot of large midfield LOS-blocking terrain being used in other areas (there isn’t much locally, nor is there much at tournaments). If the battlefield is 30+% completely LOS-blocked (even for models as large as Land Raiders), the balance radically shifts towards a more Fourth Edition game that would change the ratings considerably.

~If you’re certain that your army is incorrectly maligned, feel free to come play a game or three sometime. I’m at Battleforge Games in Austin every Thursday night. I welcome the chance to get educated.