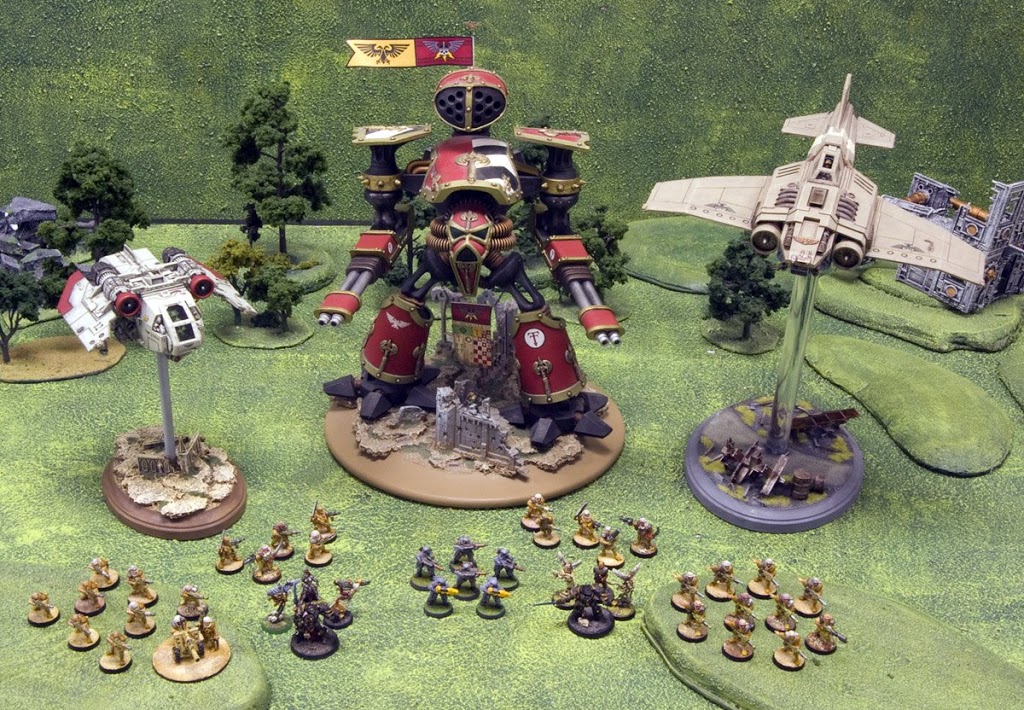 Come closer my friends, for today we have something very special. It is time for the great unveiling. Along with all the other crazies out there in Warhammer 40k land, the Fly Lords have been secretly preparing for the no-holds-barred, steel-cage-match of the year. The Gladiator is upon us!

The basics first: 2250pts, Forgeworld allowed, Apocalypse rules allowed, no Apocalypse formations, but a single superheavy or gargantuan creature is in. There will be a set of random missions to put the armies through their paces, so flexibility in both maneuver as well at tradtional firepower and assualt ability will be a key.

Months back we sat around the table and began the theoryhammer sessions and opened them up for the BoLS readers to check on popular opinion. After several weeks we narrowed the choices down to a handful of serious contenders:

Reaver Builds
8 Destroyer pieplates give them the highest shooting lethality in the game. They can clear elite armies in 2 turns, and cripple horde armies in 3-4. Enemy superheavies are for the most part doomed.

Superheavy Flyer Builds
These are masters of positioning, and can drop off enough elite infantry late game to take objectives or kill ANY single thing in a single firing phase (even Reavers). They have fickle reserves hovever,and only get one chance. They are also useless versus horde armies with lots of long range high-volume shooting (remind you of anyone?)

Angrrath the Unbound-Fateweaver Builds
The most potent assault force in the game bar none. These represent a mortal threat to anything if they can drop in close enough to assault the next turn.

IG Flying Circus Builds
These are able to just loiter and burn down the clock, awaiting last turn objective grabs. They are an almost impossible foe for Chaos Daemon and dedicated assault armies to deal with, but have the same vulnerabilities as the Superheavy flyer builds. They are paradoxically, also vulnerable to dedicated air-to-air flyers, as most of the AV:10 flying transports do not carry AA mounts.

The Plan
Looking around at our collections, the set of 3 Reavers came immediately to mind, and were quickly claimed by myself, jwolf, and minus67. A couple of the others guys went in other directions with their armies and will be featured in later articles.

An all turbo-laser Reaver clocks in at 1450 pts and left us with 800 pts remaining. Looking over the armies we were most afraid of in testing made the remaining choices obvious.

-The core army would be Imperial Guard as it gave us lots of cheap bodies to block movement, claim objectives, and generally get in the way. Conscripts and Infantry platoons fill the bill.

-Our HQs would be allied Daemonhunter Inquisitors with psycannons, mystics, and sages, to lay down the smack on any pesky deepstrikers and Fateweaver in particular.

-Thunderbolts are great for their price, filled out remaining heavy support slots and gave us a shot of harrassing enemy flyers.

The final piece of the puzzle was how to deal with the fast assaulters such as a Heirophant or Anggrath. If only there existed some type of unit in the game that was only subject to the 1″ rule, preventing enemies from coming close, but that also was immune to assaults….. like flyers.

One week of test games later against a series of flyer-blocked and turbo-lasered Gargantuan enemies proved our point. An order was put in to Forgeworld for 3 Arvus Lighters immediately. They are both physically large, can hold an Imperial Guard squad for objective grabs and, are cheap pointswise.

While the overall choices were clear, we each still customized our lists based on personal choice. Bigred: Reaver Titan Build ~ Legio Tempestus
My list is based on a belief that deepstrikers and chaos daemons are the most prevalent of the serious threats. I am fielding twin Inquisitors with mystic/sages/psi-cannons in terminator armor. This means I can only field a single Thunderbolt, so I’m weaker at dealing with flyers, but those 2 HQs can gun down Fateweaver in a single shooting phase out to 36″. Enemies also run the risk of me passing 2 free firing phases to the Reaver for EACH enemy deepstriker who strays to close. My Guard are running a conscript platoon to physically block off the reaver from assault, and an infantry platoon for general duty and Arvus grabs.

Jwolf: Reaver Titan Build ~ Legio Metallica
This list is very similar to Bigred’s, but does away with the conscripts to open up more effective elite units of IG wich several heavy weapons spread around. In particular, the list fields an additional squad of stormtroopers with dual plasma to take out priority threats who are hiding. Minus67: Reaver Titan Build ~ Legio Mortis
This build emphasizes the threat of flyers, and gargantuan creatures. 3 flyers can handle most enemy aircraft, and even keep an enemy superheavy flyer busy for most of the game. It also offers the most reliable pool of flyers to channel the movement of gargantuan creatures, to buy the Reaver time to eliminate them. The tradeoff is only a single inquisitor, who is not in terminator armor (so he can’t move and shoot the psycannon out to 36″).

~As you read this, the Flylords are locked in mortal combat. We can only hope our plans and work will allow at least one of us to run the Gladiator gauntlet and emerge triumphant. The Emperor Protects!!! I will get you all results and pics as soon as possible.