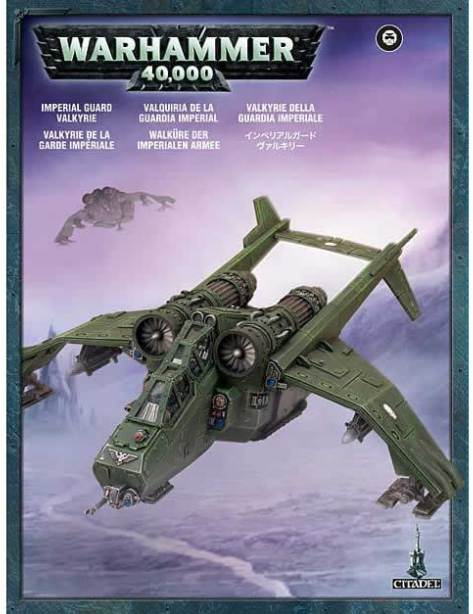 When the new Valkyrie rules came out, I looked and immediate said “Why would anyone take anything but the Vendetta? Three twin-linked Lascannons for 130 points AND transport capacity? Those are too good.” Having played a few games, here is what I have learned:

-The Vendetta is great as an AT platform moving 6”. This is no surprise, but confirmation is always good.
-Often I want to move further than 6” with my fast transports, which means the Vendetta only gets to shoot one twin-linked Lascannon. This is still a good weapon, but a 66% loss of firepower in order to more effectively use the transport function is a big downside.
-Vendettas are a lot more threatening than Valkyries, so they draw firepower that would otherwise go at tanks. This has good and bad points.
-Valkyries with Multiple Rocket Pods (MRPs) are the same price as Vendettas, and cannot really kill tanks at all. They are far more useful for shooting Assault Terminators and even normal Marines than Vendettas, though. I haven’t played them against Orks, but I imagine the Valkyrie will be the far better choice.
-Valkyries with MRPs can move 12” and fire two large blasts and a Multilaser out to 24”. This means they have full firepower when moving at cruising speed.
-Keeping a Valkyrie in Reserve to Outflank (or just Reserve in normally) is a much less painful choice than keeping a Vendetta in Reserve, as the Valkyrie doesn’t have much to do until transports are opened up anyway.

Conclusions:
-No Guard army meant to be competitive should be without at least one Valkyrie or Vendetta.
-If you’re making an Airmobile force, a squadron of Vendettas makes good sense, with two Valkyrie squadrons for transport duty.
-Valkyries are the better choice of the two for mobility purposes, and are best used held in Reserve (outflanking or normal).
-Choose their passengers to maximize the effect:
a)Veterans with plasma or melta if you expect to enter and kill Marines
b)Platoon command with flamers if Eldar/Orcs/Guard
c)Platoon squad if you are only concerned about objective grabbing.

~What say you? How are your airborne Ig forces faring on the battlefield?