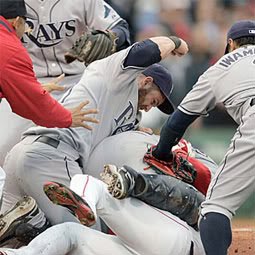 The answer is yes. Here are my thoughts on why:

#1 Sportsmanship matters and can’t be judged by staff. Unless you have a strict code of conduct and you have both the staff numbers and willingness to enforce it, sportsmanship is going to have to be judged by the players, and must be taken into account for the final outcome. I’m not willing to tell people that they have to put up with a guy that is rude and insulting as part of playing at a tournament I run, nor do I want a foul-mouthed jerk to win my event without incurring hardships along the way. That said, Sportsmanship scoring is one the traditional areas of abuse (or at least one of the traditional areas where we here lots of stories of abuse). So the trick is to allow for Sportsmanship to be scored and avoid letting it be gamed. We went with a bad/good/great system at BoLSCon, and the results were good. Most players were consistent in scoring, and the simplicity allowed us time to review bad game scores (and to a lesser extent, great game scores) and determine if the scoring was accurate. I think a simple scoring system for Sportsmanship is required for any event larger than 30-40 participants.

#2 Painting matters and can be judged by staff. We used a simple system that meant that anyone who tried at all would get most of the painting points, with a few points for extra effort. Painting is an important part of the hobby. We feel it is too important to be just an add-on to the tournament scoring, so each of 4 categories was judged at BoLSCon and had a significant prize pool associated with it.

#3 Composition matters and can be judged by staff. Composition can be used to generate initial pairings, and one staff member can do that easily enough. We did not elect to do anything about composition other than ban Inquisitorial Allies in Imperial Guard and Space Marines (which is a big deal, I’ll grant). As the organizer I made this decision based on the unfortunate synergies that could not have been foreseen when the Inquisitorial forces were created, and which I believe were not considered in the design of the new Space Marines and (especially) Imperial Guard codices.

~If you have other soft scores you think should be included, I’d love to hear why. Otherwise, your thoughts, if coherent and intelligent, are welcomed.