WARMACHINE: Armies of the Iron Kingdoms: Cygnar at a Glance 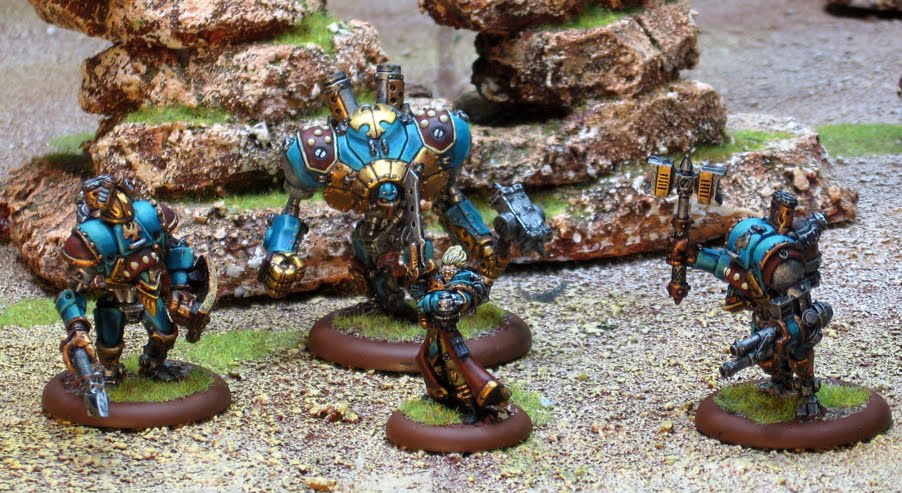 Often referred to as the “Jewel of the Iron Kingdoms” the nation of Cygnar is the most prosperous in Immoren. The Corvis treaties written 4 centuries prior to the current Warmachine timeline separated the lands of men according to the regions established by the oppressive Orgoth race, who had enslaved them for centuries. It is generally agreed that the Cygnarans benefited the most from those accords, as their land is the most fertile and the most abundant in natural resources. While the Cygnaran people are quite adamant that the borders of their kingdom contain nothing more than their ancestral land and birthright, the nation of Khador contests that claim to this day. Khador’s supposed claim to much of Cygnar’s domain is the justification for their southward imperialist expansion. Many wars have been fought between these two nations and the one that rages currently is far more savage than anything their history has seen. But with the deepest coffers and most advanced army in Immoren, Cygnar might be able to prevail over Khador if they were their only foe. But Cygnar is beset on all sides. The undead empire of Cryx, the Protectorate of Menoth, the Skorne Empire and even the Trollbloods also have their own scores to settle. And all the while Magnus the Traitor leads his mercenary forces and a few rebellious Cygnaran “loyalists” in strategic attacks in his bid to restore the deposed former Cygnaran king to power. The hallmark of Cygnar’s armies is the lightning they wield against their foes. They have found ways to fit swords, halberds, and even the lances of their knights with voltaic generators to arc electricity to nearby foes. The Stormclad, Cygnar’s Warjack of Renown, harnesses this power in its massive Generator Blade. The Thunderhead, which runs solely on voltaic power, uses this technology to unleash a devastating energy pulse decimating any nearby infantry. But raw destruction is not the only purpose of this electrical arsenal. Some of Cygnar’s more specialized electrical arsenal will disrupt the cortexes of enemy warjacks preventing them from being allocated focus. Such an ability can easily turn the tide of battle, as opponents find themselves unable to use key warjacks at a crucial moment. While it is impossible to pigeonhole any Warmachine army, Cygnar comes closer than any to being “the shooty army.” Its not that they lack for exceptional melee troops, it is merely that their firepower is, for the most part, better than anyone else’s. They have the most of it, and with the help of spells like Snipe and Dead Eye they can make the most out of it. Whether its the repeating rifles of the Long Gunners or the Heavy Barrel of the Defender Warjack, no foe will have an easy time crossing the battlefield when Cygnar brings its guns to bear.

And when guns aren’t enough Cygnar has many excellent choices for melee combat, with the ubiquitous ironclad being the most common melee option. This heavy Warjack’s hammer incorporates a shock field generator to send its foes sprawling when it finds itself too outnumbered. Cygnar’s elite melee corps are the Stormblades and Stormguard representing the latest innovations in Cygnar’s exotic arsenal. Clad in grounded and heavily insulated armor, they electrocute their foes with voltaic weapons. The Sword Knights, a martial order from an older time, are another popular melee option. These armored soldiers still wield the traditional Caspian Battleblade in wars now dominated by hulking metal goliaths. Their training ensures their continued utility on the battlefield and they excel when fighting side by side with friendly warjacks. Cygnar has some of the most balanced magic in Warmachine with a good mix of offense and defense. Defensive spells like Blur and Arcane Shield protect Cygnar’s finest from their enemies. Spells like the aforementioned snipe and dead-eye increase the effectiveness of ranged attacks. Some Cygnaran Warcasters can also slow the enemy’s advance with spells like Temporal Barrier, Earthquake, and Voltaic Snare. And when nothing else will do, there is always the option to fight directly with offensive spells like Chain Lightning, Arcane Blast, and Thunderstrike. So what does it mean to be a Cygnar player? I feel it really boils down to a mix of balance, control, and efficiency. With a good cross section of shooting melee and magic, Cygnar has the tools to be competitive in any situation. At the same time, Cygnar’s abilities coalesce to form an army that dictates the flow of the battle. Powerful shooting means the enemy will typically have to come to you, as spells like Arcane Shield and Blur limit the effectiveness of enemy shooting. Other spells might slow the enemy advance while solos or warcasters compound the problem by disrupting enemy warjacks keeping them from charging or running. Usually by the time the enemy force makes it to Cygnar’s lines, they have been softened up enough to be taken apart easily- if they make it at all. Cygnar’s higher attack values also mean they can hit more reliably while spending less focus. Also spells like Dead-Eye and abilities like Mark Target mean a Cygnar player gets to make the most out of their already elite shooting. The downside is that Cygnar’s forces lack the raw power and durability of other factions. Their Warjacks, while a little harder to hit, lack the armor and damage boxes of those from the Protectorate or Khador. At the same time their damage output tends to be a little lower. So a Cygnar player must be careful to make sure his opponent doesn’t circumvent his defenses or he may have nothing left to strike back with.

~And thats Cygnar at a glance. There’s way too much stuff to cover it all here. In fact this just barely scratches the surface. But if your interested in picking up Warmachine or starting a new faction, and Cygnar sounds right for you theres plenty more to learn at privateerpress.com. And of course we’ll try to keep expanding our Warmachine coverage here at BoLS.