Warmachine: Armies of the Iron Kingdoms: The Protectorate at a Glance 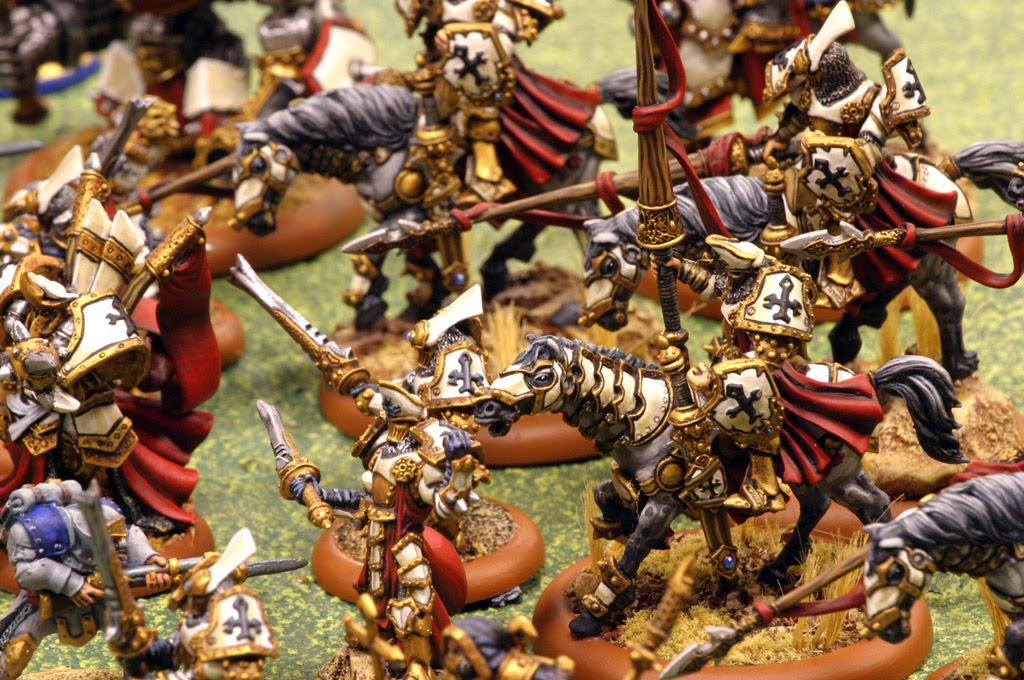 While the Protectorate of Menoth is the youngest of the nations of the Iron Kingdoms, it is founded on the principles of a Faith as old as humanity itself. For as long as there have been men on Immoren, there have been prayers spoken to Menoth, the creator god: Lawgiver, Flame Bringer. It was this god who inspired men to build walls and cities and hold the worshipers of Orboros at bay. And while his followers conquered the wild lands from that rabble of Gobber, Trollkin, Ogrun and Tharn, Menoth himself fought the Great Worm directly in an eternal battle that continues raging to this day on an astral plane. But not even the heavens are free from change.

In 1900 BR, 2500 years prior to the current time, a pair of human twins ascended to divinity. Over the centuries more and more humans turned to the worship of Morrow. Seduced by this new god’s message of tolerance, forbearance, and the ability of mankind to shape its own destiny, Menoth’s faithful began to falter. And while many continued to worship the Creator of Man, by the time the Orgoth had been expelled from Imorren, the worship of Morrow had supplanted the Old Faith as the dominant religion of the Iron Kingdoms. Simultaneously, many men had begun to worship Morrow’s dark sister Thamar in hidden cults throughout the land. It was this most insidious of deities who gave the use of sorcery to humanity, and Menoth’s children could only watch the propagation of this blasphemous gift. Nonetheless, for a time, these faiths coexisted in relative Harmony in the various nations of men. In 293 AR the Morrowan church was named the official religion of Cygnar. Menoth’s faithful tolerated this insult for nearly two centuries. A further blow came when the Morrowan clergy usurped the Menite priesthood’s right to participate in the naming of the successor to the Cygnaran throne, claiming members of the Old Faith had played a role in the kings death. Eventually the faithful could no longer stand living alongside the witchcraft that surrounded them and sought to root the evil out of Cygnar. Many heretics died in mysterious explosions and accidents, and before long the Cygnaran army stood in open watch of Menoth’s temples. Overcome with revulsion at his fallen nation, Sulon, who would become the first Hierarch in centuries, led his people in a religious revival. Scores of the faithful marched to the Cygnaran capital of Caspia and Sulon began to train them as an army while simultaneously mustering all the Menite martial orders to him. Soon he had amassed thousands of soldiers and declared that all those of the faith join him in Eastern Caspia. The Cygnarans would not long tolerate this open display of power and sent an army to return peace to the land. The ensuing war raged in the streets for two years, until the Cygnaran northern army was sent to quell the uprising. Knowing that the incident would forever prevent that nation’s faiths from coexisting in peace, the Cygnaran king granted the desolate stretch of land East of the Black river to the Menite faithful. The Protectorate of Menoth was born.

This new nation’s people have spent the decades since preparing for a war on the unbelievers of Imorren. Lacking the technology to build warjack cortexes until recently, the beginnings of the Protectorate army were forged with cortexes smuggled from Khador. This nation was shrewd enough initially to recognize an ally against a common foe, but their own war effort has since prevented them from giving any more aid to an upstart kingdom. Since then, with the aid of kidnapped sorcerers, the Protectorate now has a self sustaining war effort. No one in the Iron Kingdoms is safe from their wrath. Those who worship other deities are heretics who have the option to repent or burn. The Menites of other nations are just as guilty; living alongside and tolerating sin. They can choose to recant and join the Protectorate’s war effort, or die with their fellows.

Thanks to the discovery of a highly flammable black liquid that oozes forth from the ground in many areas of their new lands, the Protectorate’s soldiers often wield weapons with an emphasis on flame. In a world where blackpowder can only be manufactured using complicated alchemical processes the followers of the One God see this boon as nothing less than providence, and have named the substance Menoth’s Fury. The Repenter light Warjack and the Flameguard Cleansers make the most mundane use of this substance, igniting unbelievers with gouts of pressurized flame. The Vanquisher heavy warjack fires a shell infused with the substance which ignites on impact covering nearby foes. The bombs of the Protectorate’s holy zealots function in much the same manner. The Protectorate is also home to several of Imorren’s most revered martial orders. The Knights Exemplar are the most numerous and the bonds of brotherhood they share are as legendary as their skill at arms. The most numerous of the knights wield ancient Relic Blades infused with holy magic. The Exemplars Errant fight independently in foreign lands wielding blessed crossbows to aid in their fight against loathsome sorcerers. The Exemplar Vengers invoke an image of ancient days as they ride into battle on their proud steeds. But perhaps the most intriguing facet of this order are the Bastions: men whose faith gives them the impossible strength to march into battle clad in massive armor. The Order of the Wall is almost as old as civilization itself. Its Paladins value defense and offense in equal measure, and even mighty warjacks may falter when trying to bring down one of these brave warriors. Finally, the newer Order of the Fist emphasizes agility and speed. Its adherents fight lightly armored and unarmed, as their blows can shatter stone, and bend steel.

The warcasters of the Protectorate wield powerful divine magic. They can annihilate their foes with divine fire, shield their men from harm with holy prayers, run their warjacks more efficiently, or set their soldier’s weapons ablaze. But what most sets apart Protectorate magic, are spells which hinder enemy sorcery. Most Protectorate warcasters have a way to limit their enemies’ spellcasting potential in some way, causing enemy upkeep spells to expire, granting immunity to magic for friendly soldiers, or injuring sorcerers for casting spells. But the holy power of Menoth is not restricted to his warcasters. Units and solos use his divine powers in ways that are possibly more important. The Choir of Menoth chant holy prayers that can shield a friendly warjack from hostile spells or enemy fire; or drive it to fight with even more fearsome power. The sinister Reclaimers, who tend to the spiritual needs of the fallen, have found a darker purpose on the battlefield. They have the power to harness the very souls of those menites felled in battle and use that essence to help power warjacks. And with no end in sight to the current war, the ruling priesthood has recently allowed the enlistment of the Vassals to the Protectorate’s military. These sorcerers, usually prisoners from foreign lands, use their arcane power to push the Protectorate’s Warjacks still further.

So what does it mean to be a Protectorate player? The core of Protectorate strategy involves synergy, denial, and reprisal. The Protectorate forces contain access to peerless buffs and enhancements. The simplest and most universal combo is to use your choir infuse a warjack for +2 to attack and damage rolls, then use a Vassal to give it an extra free attack. If thats not enough for you, Reznik or Feora can Ignite it, giving it a further +2 to all melee damage. These abilities can turn the humble 6 pt Crusader into a killing machine capable of destroying any opponent in a single round. As for denial, we’ve already discussed how effective Protectorate warcasters are against enemy magic, but it hardly stops there. The now infamous spell Rebuke, denies enemy soldiers the ability to receive orders, making charging impossible. Also infamous is the Harbinger of Menoth’s ability to take damage to prevent the deaths of friendly infantry. Outside of warcasters, the Choir can grant immunity to enemy magic or shooting against Warjacks for a round, while a vassal can have a warjack move to safety in reaction to getting charged. The reprisal aspect of the Protectorate comes from the many beneficial effects that trigger upon the deaths of its soldiers. The Knights Exemplar get stronger and harder to kill as members of their squad die, while their officers, the Seneschals will have their wounds healed when nearby friendly models are killed. Meanwhile the Reclaimers will turn the souls of those fallen into focus they can allocate to warjacks, who in turn fight all the harder for the loss of their comrades. In reading this you may already be noticing the biggest strategic downside to being a protectorate player. A Protectorate army needs a large support system to make the most of its abilities. The points spent for these models often mean you have fewer dedicated offensive choices right out of the gate. You also have to be very careful to keep these often frail solos and units alive as their loss severely limits your army’s effectiveness and can cause your best laid plans to unravel. Most Protectorate Warcasters are also rather frail, so you may often find yourself taking a Devout to help protect them from shooting which means even fewer points to spend on other things. The Protectorate army also has a tendency to want to brick up near its buffing units which can cause their armies to be flanked easily.

I hope you enjoyed this second installment of Warmachine at a glance. Once again, there’s a lot more to The Protectorate than what you saw here, as I’ve just tried to go over some of the basics. If burning heretics is your idea of fun check out the Privateer Press website or Battle College to learn more.