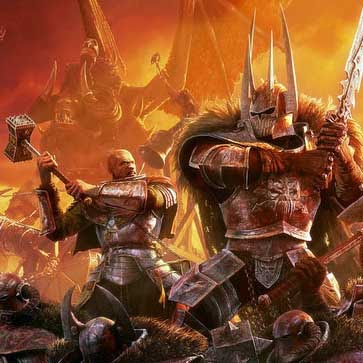 A guest editorial by iamaddj

Many of you either remember or have heard tales of the old age of Herohammer, or as some call it, 5th edition Warhammer Fantasy Battles. These are the days of yore when mighty Vampire Lords rode upon Emperor Black Dragons, when you could stilly fly high and when your greatest worry was not the line of enemy repeater bolt throwers but his High Elf Prince on a Pegasus, who waited above the clouds to do battle with your lord of undeath. These where the days when battles where decided by a handful of powerful heroes, the massed infantry of both sides serving only as fodder for their heroics.

Then came 6th edition, the great Age of Armies. Heroes became manageable, artillery and shooting ended the days of dragons and griffons and wizards where relegated to doing 2d6 S4 hits a turn, if they where lucky. Massed blocks of troops, infantry or cavalry became the winning combo. Some armies still clung halfheartedly to the old ways, Vampire Counts will always be a hero-centric army, it is their nature, but for the most part heroes became support, a bonus. Many rejoiced at this change ( I was among them) “At last”, they said “we have a Strategy game, rather then some form of tabletop RPG, now we can use tactics, now we have something that is like “real life ™.”

But that age was short lived, army book creep, 7th edition, the changing philosophy of Games Workshop, blame what you will but Herohammer is back in full force. Once again we see characters that are able to single-handedly take on blocks of massed infantry, and win. Again we see powerful dragons take flight and dominate the skies, and now once more we see wizards whose unrivaled power can destroy whole units in a single casting. What’s more we have witnessed the birth of the “Death Star”, a powerful unit into which the majority of a players characters are placed. In these units it is the characters who do all the killing, the unit is there to take wounds. I myself have been a proponent of this with the so-called “doggy death star”, a unit of dire wolves with 4 vampires in it (with the Drakenhof banner of course). The unit here is to take wounds, the vampires do the killing. This army is not alone. You may have heard of the “Shade-star” a large unit of Dark Elf shades full of heroes and assassins (who are just heroes who don’t take up slots), or the “Chosen Death Star”. While these units vary in their own capacity to do damage, the main idea behind them is a concentration of heroes that can overcome the enemy. In modern fantasy Heroes do most of the damage, units serve as delivery devices. That we live in a New Age of Herohammer, is not up to debate; as anyone who has paid attention to the game over the last few years can see the changes. No, the questions are twofold; firstly is this a deliberate decision on Games Workshop’s part and secondly, is this a change a good one?

I think that it is pretty clear by looking at the past few years of Warhammer that this change is a conscious move on Games Workshop’s part. Part of this I feel lies with Chaos Demons. Greater Demons of Chaos have to be able to take on a unit by themselves, either in close combat or with magic. They cannot join units, nor hide, nor gain any real support. In order for them to be a viable unit they must have a chance at beating a unit single handedly. However this being the case, there must be a counter for them, some other hero must have a chance, even if it is not a good one, of beating a Greater Demon in combat and any hero that can do that, also has a good chance of being able to take on a whole unit, thus we have one reason for Herohammer. On top of that there has been a clear decision on Games Workshop’s part to increase the power of characters, wither with powerful new spells such as Infernal Gateway (allowing a wizard to suck an entire unit into the warp with no saves), powerful new magic item combos such as the Dreadlance and Red Fury (allowing a vampire to get up to 8 S:7 attacks that automatically hit) or simply through an amazing stat line such as the Bloodthirster has. This change is not solely new, it is in fact in some ways ingrained in the very basic rules of the game. Take overkill in challenges, which allowis a hero to get up to +5 over the number of wounds the enemy has they allow a lord challenging even just a unit champion to overcome the basic static combat res of 5 (3 ranks, a banner and outnumber) and win by one. Games Workshop in this case knows what it is doing and is doing it on purpose.

Now is this change a good one? The answer to this question really comes down to which of two “camps” you belong to. On one hand you have a group of people who do not like Herohammer. They believe that WFB should be a tactical tabletop war-game, you should maneuver units around trying to gain an advantage, flanks, rears, these things should be important. The game should in some sense resemble a medieval battle, with many armies representing “historical” equivalents, the Empire is the Holy Roman Empire of the 30 years war, the Dwarves are the Romans, the Beastmen are the northern barbarian hordes that menaced Roman and her successors, and so on. Then there is the other camp (and this is the one that I feel Games Workshop has fallen into now), they think that every game of Warhammer should be an Epic. Every battle should be like an epic poem of old. Mighty heroes should do battle and drive armies before them, spell casters should rain fire and destruction form the heavens, basic troops have little part other then to make the heroes look good. Many people think this is how a game of Warhammer Fantasy should go; focussed on spectacle and storytelling, not tactics and maneuver. These ideas are not at their base new, they are some of the oldest ideas known to man, take these selections form an recent Ard Boyz battle report:

“Thirsters die to Gift of Chaos and the Hellfire Banner. Thirster gets in there and almost dies to Skulltaker, thank you Kairos for the Ward re-roll. (Fateweaver!!!!!!!) The battle continues for another turn and Skulltaker dies in my Magic phase to Kairos bursting Cleansing Flare.” “I kill off his Skink Priest and his flank falls. Thirster mops up his Temple Guard slowly but surely and eventually kills Lord Kroak.”

Notice how all the action is done by heroes, the game revolves entirely around them, now compare that to this inscription at Karnak by Ramses The Great, this is one of the earliest recorded accounts of a battle

“His majesty slaughtered the armed forces of the Hittites in their entirety, their great rulers and all their brothers … their infantry and chariot troops fell prostrate, one on top of the other. His majesty killed them … and they lay stretched out in front of their horses. But his majesty was alone, nobody accompanied him”

This could almost be a description of a modern Fantasy game. The idea of Herohammer, is in many ways how humans have been trained to look at battles since the dawn of recorded history. By bringing Herohammer back Games Workshop is drawing on age old traditions and attempting to make the most Epic battles they can. Some people like this, some do not. Epic battles may at times be more fun to hear about then to play (no one likes being the conquered masses in an epic tale) at heart its up to personal taste. The truth of the matter is that Herohammer is here and we all most learn to live with it, as I have.

~One question remains, next year is rumored to see the release of 8th edition WFB, do you want to see 8th keep or do away with Herohammer?