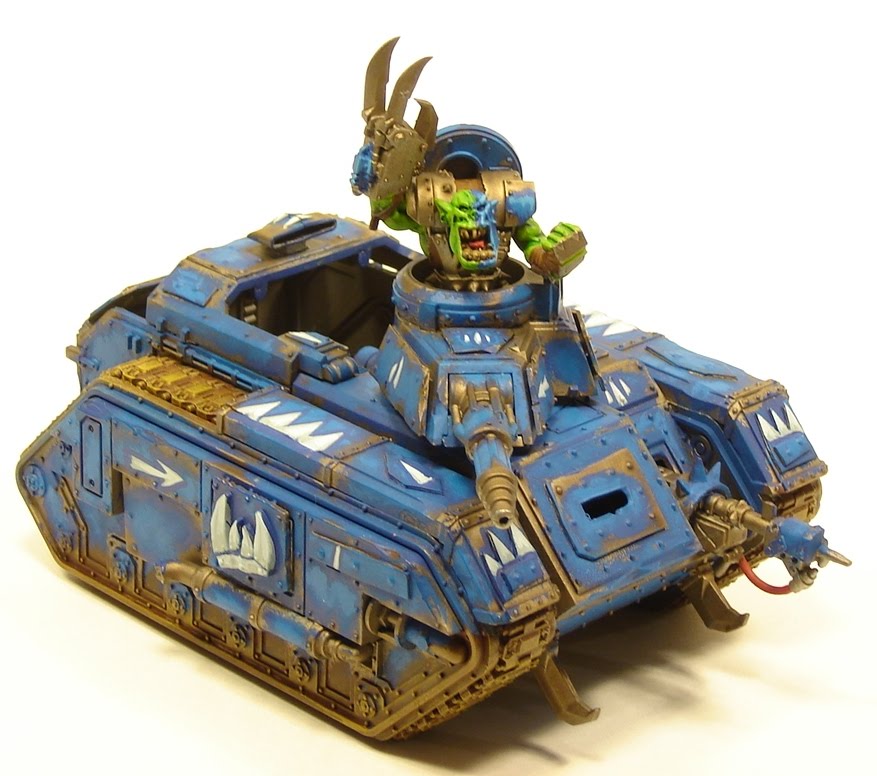 Hey MBG Rob Baer here with my battle report from my victory at Mechanicon ’09.

I ran Imperial Guard, but with Orks. The theme is that some Death Skullz went a little wild looting guard vehicles- they even followed their army composition! That’s my theme at least, and I’m sticking to it. (Hey if Chaos can have guard armies why can’t Orks??!!)

The “Choppas” are converted Vendettas piloted by grots. I also converted up some Hydras from Trukks, and two Manticores from Battlewagons and Chimeras. The rest of the vehicles are just converted Chimeras with an extra helping of Orky goodness. Checkout my blog Spikeybits for the list I used and more pics of the models. It was truly a blast to play this army, and I had some great opponents at the GT.

I played against Steve Mcdaniel. He was running a fairly balanced Tyranid list, that I actually had a hard time against. There was just a lot of stuff to deal with in his list.

We set up the 5 objectives pretty much across the mid line of the table and went to it. On turn one we pretty much had our battle lines drawn, him spread out across the whole table, and me about three quaters of the way across mine. I drove my Hydras on to screen the Manticores all in the middle of the table against my long edge. Keeping them company was a couple empty chimeras to thwart off encroaching little bugs.

I pushed from my strong flank, and with the help of my Manticores carpet bombing his scoring units, and my vendetta squads dropping the big bugs I managed to get the majority of the objectives. Late game I had to fend off some Hormagaunts and Genestealers trying to take out my firebase, but between the Hydras and Chimeras it was not an issue. This time I drew Casey Campell and his Fateweaver Daemon list. Casey is a member of the Iron Fist Gaming League out of Northern Virginia/ Maryland. Bunch of cool dudes.

So I took a look at his list and I knew I wasn’t in Kansas anymore. Fateweaver, Juggers, and flamers oh my. My only ace in the hole was my Inquisitor and his two mystics. Keeping that in mind I set up and took my first turn.

My set up was pretty solid, as I turtled in my left corner to maximize cover and make him drop into difficult ground. (I think he ended up losing a few guys and immobilizing a soul grinder, yah!) The key to my set up, or so I thought, was my Inquisitor and retinue in the Vendetta smack dab in the middle of my turtle. That way I could maxmize my mystic rolls and try to ping his uglies as they came in. I kept the Vendetta there for his turn and didn’t run it out to the middle of the board. In hind sight it may have been a good play to move it, but i doubt they would have survived for long. Either way keeping it back made it so he dropped farther away, and it would take two turns for him to pull off assaults. That was okay with me, even though I didn’t really get any mystic shots off.

So he got his stuff in and ran some squads towards my line, but his Juggers scattered too far from Mr. Fateweaver to be survivable against my battleline. Back to me. My movement was pretty much nill, I may have moved some stuff to get better LOS at his hard hitters. Then I proceeded to open up on Fateweaver, killing him with a shotgun after only 5 wounds. I think Casey was pretty sad there, even though he knew this would be a hard match for him. It went down hill from there with me mopping up most of his relative units by turn 3. My opponent this time was Tim Hudak. He’s the guy on the right. (Pic and list shamelessly stolen from Jawaballs) He sighed when I walked up, not looking forward to this match up.

Fortunately I win the roll to go first and set up a vendetta squad directly across from Tim’s Deployment zone. Alpha Strike anyone? I kept the other to outflank and try to contest his objective. The Maticores are set up in the back, screened by the Hydras which in turn are screened by chimeras. They are all positioned diagonally towards the center point of the board The two empty chimeras are in the very front of the line with the Devil dog on the top flank in case the Land Raiders break out.

So I made my scout move placing my Vendetta 12″ away from his Land Raider formation. Another sigh, but he was all smiles when he rolled a 6 and stole the initiative from me. Then I sighed…

The game was a slugfest. I finally managed to halt the Land Raider Phalanx and kill Vulcan but the cost was too high, and I couldn’t blast him off his objective or contest it. My fourth round opponent was Paul Miglino of Big Bugs fame. Finally a big bugs list I can pummel with superior fire power!! However when they made an announcement about the mission I knew it wouldn’t be so easy. Scoring units could hold multiple table quarters. Soooo that meant one unit could sit in the middle of the board and hold Arizona, New Mexico, Utah, and Colorado respectively.

So the game opens up with Paul electing to go last- good move for him. He keeps all his units in reserve- even better move. So much for a pummeling…

I set up the firebase as close to the middle as I can and still have LOS to his table edge. The game pretty much goes; Paul moves his bugs on and I carpet bomb them. Wash rinse repeat. In the end we both have the same amount of states, er table quarters, but I edge him on victory points. Coming into this game all the top tables were pretty much tied on points so this round was going to make or break somebody.

I get to the table and I’m matched up against Nick Nanavati, aka Jailbait because of his age. So another big bug list. Great, I love these. So we exchange lists and look at the mission. WTF? Troops and HQ? Oh and he has two 3 guarded tyrants.

I think I went first on this one. I set up the firebase in the middle of my edge to keep the Genestealer outflank to a minimum. He kept all his little bugs in reserve. Smart. We exchange alot of fire and I lose a few chimeras to keep his’ fexes from hitting my line, so I can wear them down a little more. I burn down a tyrant squad and some ‘fexes, but he kept the other tyrant out of my range and LOS. I ended up falling back to my left quarter firing as I go, but can’t touch his small bugs because he has ringed his board edge with them. Congo lining around like that prevented my Manticores from doing work on them, and in the end kept me from winning. I had to keep the fire on all the big bugs. It didn’t help that he knew that my Hydras were of the most danger to him so he dealt with them early.

So I came out of the round a little sad that I drew. The mission was tough, and all I could hope for was that the other top tables drew, as well. After checking out the other games that was the way it was going. So it seemed like this tourney would be won on soft scores. After all that I ended up with overall, and my first GT win. I won some cool swag and got some great memories, but we all gained a great new GT to go to in the North East. So thanks to Tony and crew for putting on the first of many Mechanicon GT’s.

~Bigred here. Lets give it up for Rob and his FANTASTIC Ork army. Those Valkyries are absolutely stunning, and Rob says he will drop in from time to time to show us more of his cool conversions.