40K EDITORIAL: Conan! What is Best in Life? 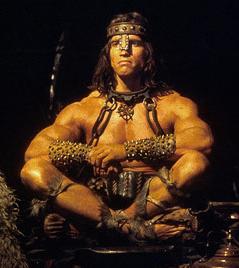 We all remember that classic moment in Conan the Barbarian when the Mongol General asks “Conan! What is best in life?“. Without hesitation, Conan spat out “Crush your enemies, see them driven before you, and hear the lamentation of the women!“.

Just like every kid in the early ’80s, I cheered along with the crowd and tried to work the phrase “crush your enemies, see dem driven before you, and hear da lamentation of da women!” into every conversation I could for the next decade.
But the rest of the scene really stuck with me. So let’s go back a few lines before Conan’s thickly-accented catch-phrase. The Mongol General says, “We won again! That is good, but what is best in life?”. The Mongol warrior answers with “The open steppe, fleet horse, falcons at your wrist, wind in your hair!“. Although Mongol General isn’t happy with the answer, I totally grok it.

Conan took no joy in the battle — his only goal was to achieve a complete and crushing victory. He fought only to win. The Mongol warrior fought because because he loved the battle and with it came freedom, excitement and prosperity.

When I sat back to consider the games I played in 2009, that scene came to mind. Was I Conan, who played only to win? Or was I the Mongol warrior, who played because of a love for the game?  Which do I aspire to be? How about the hobby? Is one better than the other, or is there room for both?

As I look at my friends in the hobby, I’ve noticed that almost all of them are squarely in one camp or another. I’m struggling to name a single player that effectively straddles the fence. Even in the friendliest of pick-up games, it feels like “fun” and “winning” are mutually exclusive.

I feel like I need to illustrate the point with some examples. I’m going to use some friends to help me with that — these guys are super close friends (most I’ve known for a decade or more), but that won’t stop me from typecasting them.

“Crush Your Enemies”
Jwolf and Goatboy are great examples of “Crush Your Enemies” players. Jwolf is one of my closest friends and you’ll never meet a nicer guy, but he’s also (in my opinion) the best 40k player in the world. Although he claims to understands that both players are playing to have a good time, he has a tendency to get so caught up in accomplishing the goals of the game that he fails to notice that his opponent stopped having fun a few turns back.

Goatboy (another one of the top local players) is a completely different type of “Crush Your Enemies” player. He is much more intentional and methodical in his approach. He spends a decent amount of energy building (and beautifully painting) nasty lists, and then he tunes those lists based on what works and what doesn’t. Once you have him on the table, he’s relentless. He’s a great guy, and laughs and jokes with  you while he plays, but he won’t pull any punches — even when he’s winning. And he’d never want you to pull punches against him.

I can understand the desire to win. I have it. I think we all do. But do players players that focus on winning games missing the fun in playing those games? Do they fail to enjoy the crazy random things that happen along the way to their victory?

Bigred loves the game more than anyone I know (he got me playing many, many years ago), but he doesn’t enjoy the competitive side of the hobby as much as I do. It’s frustrating to me because he’s a great player and can hold his own against monsters like Jwolf and Darkwynn. I want to share that competitive side of the hobby with him. But he enjoys the fun he gets from the social aspect of the game.

Bulwark is just awesome. He’ll play as hard or as soft as you want — even in a tournament. Even when he disagrees with you, he’s happy to let you play a rule your way. I’ve never seen him get frustrated. Never. We have a history of facing each other in ‘Ard Boyz semi-finals and we’ve always played them like social, friendly games.

I can understand wanting to play with toys you’ve made and have fun. I can even see how not caring about losing is a good thing. But do players that focus only on the fun missing the excitement of competition? By focusing on the game are they missing out on the fun of winning games?

CONCLUSION
I guess for some players, it’s the destination that really matters while others prefer the journey. Both are having fun while playing games, but I can’t help wondering which are getting the most out of the hobby they love.

~So, ask yourself, are you Conan or the Mongol warrior? Is it about crushing your enemies or the falcons on your wrist?