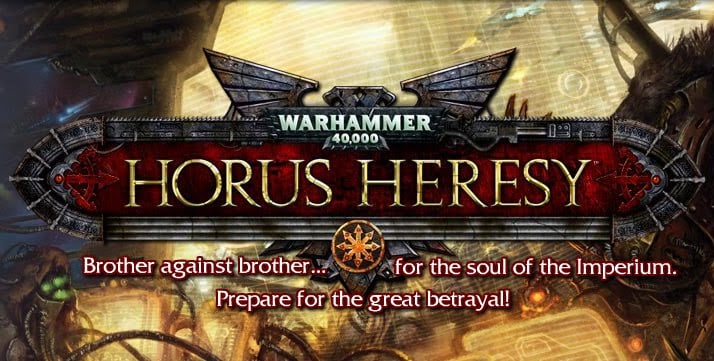 The Latest from Fantasy Flight Games:

Long before the grim darkness of the 41st millennium was a time of myth and legend, when god-like beings met in a monumental battle of brother against brother. Ten thousand years prior to the Battle of Macragge, where the 1st Company of the Ultramarines bravely gave their lives defending against the Tyranid hordes of Hivefleet Behemoth, and ages before Abaddon the Despoiler conceived of his heinous and bloody Black Crusade, occurred the greatest of all battles. Let us return to the Imperium of the 31st Millennium, when a golden age was shattered by betrayal. Welcome to the Horus Heresy.

Horus Heresy is an epic board game for two players set in the dark future of Games Workshop’s preeminent Warhammer 40,000 universe. Each player commands vast legions in a pitched battle across the now war-torn surface of Terra, birthplace of the human race. The forces of the Imperium and Chaos will clash, rocking the very foundation of humanity.

Whether your allegiance is honorable or profane, Horus Heresy demands you bring every last shred of your tactical and strategic ability to the table. This is not a simplistic affair fought between a handful of skirmishing units, with individual combatants sprinting between areas of sparse cover across an open battlefield. This is war on an epic and unimaginable scale, the scope and significance of which has never been seen before or since!

Can Horus succeed in this profane quest to crush the Imperium beneath his corrupted heel, drowning the galaxy in a flood of Chaos and destruction, or will the steadfast Holy Emperor of Mankind break the bloody siege, turning the tide of assault against the cruel machinations of the Dark Powers of the Warp? You will decide which direction the winds of fate will blow, for this is the moment of truth, and we hope to see you there! Horus Heresy is a board game that pits two players against each other to recreate the most famous battle of Warhammer 40,000’s rich history, in which the Warmaster Horus’s betrayal of the Emperor comes to its climax. Taking the side of either traitor or loyalist, players control a fearsome array of units, including the Emperor and Horus themselves. Brother fights brother, and the universe hangs in the balance!

An innovative order and initiative system forces each side to carefully consider the commands they issue to their troops. A dramatic, card driven combat system incorporates escalating damage, gives players the opportunity to allocate resources between attack and defense, and brings to bear the unique special powers of each unit type, from fortification-destroying Titans to the perverse daemons of Chaos. Brother fights brother, and the universe hangs in the balance!

Horus Heresy includes over 120 detailed miniature models including 10 plastic terrain pieces, and more than 200 cards to bring this sweeping conflict to life on a stunning map of the war-torn Terra. ~Very Impressive!  As an owner of the ancient Horus Heresy board game from decades ago, and a lot of respect for the quality level of FFG’s recent Games Workshop licended products, I’m anxiously awaiting this one.