WARMACHINE: Armies of the Iron Kingdoms: Mercenaries at a Glance 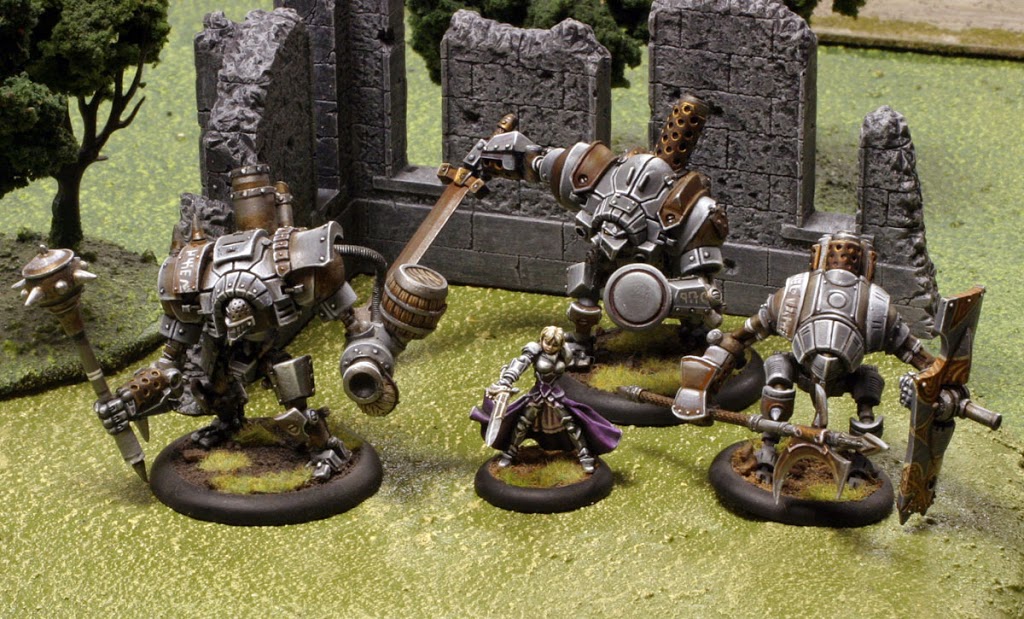 In the war-torn Iron Kingdoms, its good to be a mercenary. With no end in sight to the constant wars in Immoren, a steady rifle arm or a strong hand and a solid blade are always in high demand. When a commander needs reinforcements or a set of skills his own men are lacking, there will always be mercenaries somewhere, ready to take his coin. The situations which may bring mercenaries to the battlefield are numerous. In some cases whole companies of mercenaries fight, train, and live alongside a nation’s regular army as part of arrangements that may have existed for centuries. Alternatively a beleaguered commander may find himself hiring a group of outlaws when failure is not an option and he has no alternatives. Former allegiances, or old grudges also mean that some mercenaries may refuse coin from the armies of certain nations.
Numerous laws and codes exist to ensure the legitimacy of these hired swords. They help protect the mercenaries from any kind of prosecution that may result as a consequence of their employ. Simultaneously they ensure that anyone hiring mercenaries need not worry about their soldiers turning on them on the battlefield at the prospect of a higher rate. Many of these laws have existed for as long as the Iron Kingdoms, and they ensure that mercenaries and their employers both benefit. Mercenaries who break the codes and live to tell the tale become wanted men and quickly find themselves resorting to brigandry or worse. But if they are skilled enough and can avoid capture, they may find themselves back in the employ of a desperate general and on the battlefield once again.
Certain powerful individuals with the money and resources hire whole armies of mercenaries to take advantage of the chaos the wars in Immoren create. Whether noble or sinister, the varying agendas of these groups have come to create what are referred to as “contracts”. While many mercenaries fight merely for coin, those who owe loyalties to specific contracts will not fight alongside those of others. Other divisions may form based on disagreements over which nations various mercenaries agree to work for. One can understand how one sell-sword born in Cygnar might be reluctant to fight alongside another who has consistently helped drive forward the war effort of Khador. These animosities mean that mercenary armies are often more restricted in their choice of soldiers than one might expect. So when choosing your forces you must respect a mercenary’s contracts. There are several contracts you can choose to play in Warmachine and they all have their own special advantages. Since many mercenaries do chose their employ based solely on rate of pay, there is plenty of room for overlap between contracts.

The Searforge Commission is probably the most restricted in its choices as it represents the interests of Immoren’s Dwarven kingdoms. Only Dwarf and Ogrun models may be taken in a Searforge Commission army. A searforge army will be incredibly heavily armored and destructive, but lack for defense and speed. Only two warcasters are available for this contract, but Gorten Grundback and Durgen Madhammer both have very different playstyles. Gorten is an incredibly sturdy warcaster who brings the fight to him and then helps his warjacks pound the enemy into the dirt. Durgen lives to watch things explode, and with his experimental cannon Buster, he can single handedly devastate an entire enemy army. The Searforge Comission is the only Warmachine army outside of the Retribution of Scyrah where you can include a warbeast, as Brun Cragback will bring his giant ursine companion Lug into battle to fight for his fellow dwarves. The Tallion Charter is a collection of the various rogues and scallywags who operate as pirates (or privateers, if they’re lucky enough to have the proper papers) harrying the harbors and navies of the Iron Kingdoms. Of this Contract’s three available warcasters, Bartolo Montador and Fiona the Black are both true mercenaries, while Phinneas Shae’ sole motivation is taking his revenge against the Mercarian League after being unfairly branded pirate for mutinying against a lunatic commodore. The three fight very differently. Montador loves his warjacks, boosting their efficiency at range then bolstering their armor if his enemies get too close. Fiona relies more on trickery, denial, and assassination. An army led by Shae will have an emphasis on speed and maneuverability. Shae is also unusual in that he may currently only be included in a Tallion charter army, which in game terms technically means he isn’t really a mercenary. While a Tallion Charter army can include any mercenary warjacks, its troops are limited to the rank and file pirates called Sea Dogs, the Press Gangers who reinforce their ranks on the battlefield, and the numerous Privateer character solos. These individuals have various unusual skill sets, and can inspire the sea dogs to fight more fiercely, or boost the effectiveness of Warjacks. The Magnus Agenda represents forces led by the infamous Magnus the Traitor, renegade warcaster loyal to the deposed king of Cygnar. Magnus carefully picks jobs that will help him achieve his goal of returning the former monarch to power while also leading independent raids on poorly defended Cygnaran outposts to help keep up his stocks of powder and coal. Just looking at Magnus is probably a crime punishable by death in Cygnar, so only the most desperate or reckless mercenaries will follow him into battle. This includes men who are already outlaws, like Jarok Croe and his Cutthroats or Kell Bailoch renegade sniper. Those who care more about battle and coin than law, such as the notoriously amoral Steelheads, or the Rogue Alchemist Gorman DiWulfe also find work alongside The Traitor. Since Magnus is not the only one who wishes to see the former king of Cygnar restored, his armies often include other traitors and deserters from the Cygnaran army. Some of the Protectorate’s Idrian Skirmishers have thrown in their lot with The Traitor as well. Magnus is also famous for his custom Warjacks, and his Renegades in his arsenal are currently the only mercenary warjacks with functioning arc nodes. Magnus is the only mercenary warcaster with an epic incarnation, and both versions are very versatile casters who tend to favor mixed forces with a good combination of shooting and melee. Just make sure you bring along at least a few of his warjacks.

The Highborn Covenant is financed by Llaelese nobles who were exiled from their homeland when the Khadoran army invaded. The ruling Elite of Llael now reside with their allies, the Cygnarans, so it is no surprise that the choice of mercenaries in a Highborn Covenant force is restricted to those who will work for Cygnar. Like many mercenary forces, they typically have an emphasis on speed and offense over defense and staying power. They do however, have access to certain resilient troops that other contracts may not. Their forces can include the hard hitting heavily armored dwarven Forge Guard, as well as allied Precursor Knights who can use the shield wall rules. Ashlynn D’Elyse, the defacto leader of the Llaelese resistance is the only mercenary warcaster who will work exclusively for the highborn covenant. She possesses one of the few infantry speed buffs left in MkII Warmachine, which, when combined with access to fast troops like the Nyss Hunters lets her play a strong first strike game. The spell Gallows also gives her strong assassination capability, as she can drag unsuspecting warcasters towards her, cutting them down with her skill as a peerless fencer. In addition to Ashlynn, a Highborn Covenant army can field any Mercenary Warcaster with the exception of Magnus the Traitor and of course Phinneas Shae. The Four Star Syndicate is, at least for now, the only contract left to discuss. This contract represents the interests of a seedy criminal organization which operates out of the notorious Ordic port of Five Fingers. The Syndicates motives are clear. They send out their forces to take advantage of the chaos caused by current wars, striking where resistance is weakest and stealing whatever they can. A world class network of fences, and the high demand for powder and mechanika mean that that any spoils will quickly be sold for an exorbitant price, possibly right back to the nation they were stolen from. Its no surprise that the Syndicate pays its mercenaries well. In game terms, a Four Star army can include any mercenaries who will work for Cryx or Khador, as those allegiances tend to represent men whose consciences have a price tag; if they have any conscience left at all. The inclusion of Croe’s Cutthroats, and allied Khadoran Kayazy Assassins, present Four Star Syndicate armies with unique assassination potential lacked by the Highborn Covenant. Having many choices in common with the Highborn covenant, the Four Star Syndicate tends to have a similar feel and playstyle.

So its easy to see why Mercenary armies are the most difficult to pin down, and why its pretty much impossible to generalize a Mercenary playstyle. What can be said for sure is that mercenaries have some of the most colorful troops, warjacks, and characters in the game. A mercenary force can represent most of the major races of Imorren, including Humans, Elves, Ogrun, Trollkin, and Gobbers. Mercenary warjacks also tend to be some of the most traditionally steam-punk looking with lots of great wierd clunky looking pipes, rivets, and plates. The army is also full of character solos each with their own unique rules and back story. There’s a certain joy to be gained from seeing a group of rag tags combine all their special skills to make something truly fantastic happen. Its like something out of the A-Team or The Magnificent 7. And there’s a similar thrill in watching those same sell-swords trample the pristine banners of the most powerful nations in their world underneath their filthy boots.

~ And that’s mercenaries at… well lets call it a glance and a half. If you’d rather swear your loyalty to coin than any pompous king, Mercenaries are the army for you. Since there’s still lots more to learn, check out the usual places: www.privateerpress.com and battlecollege.wikispaces.com.

Author: Ben Williams
Ben Willimans is a Professional Painter and Columnist at Bell of Lost Souls. He has been involved in the hobby and art side of miniatures and the tabletop gaming industry for over 20 years. He has won multiple national painting awards.
Advertisement
Mercenaries Tactics Warmachine-Hordes
Advertisement