WARMACHINE: Forces of Warmachine: Retribution of Scyrah At A Glance 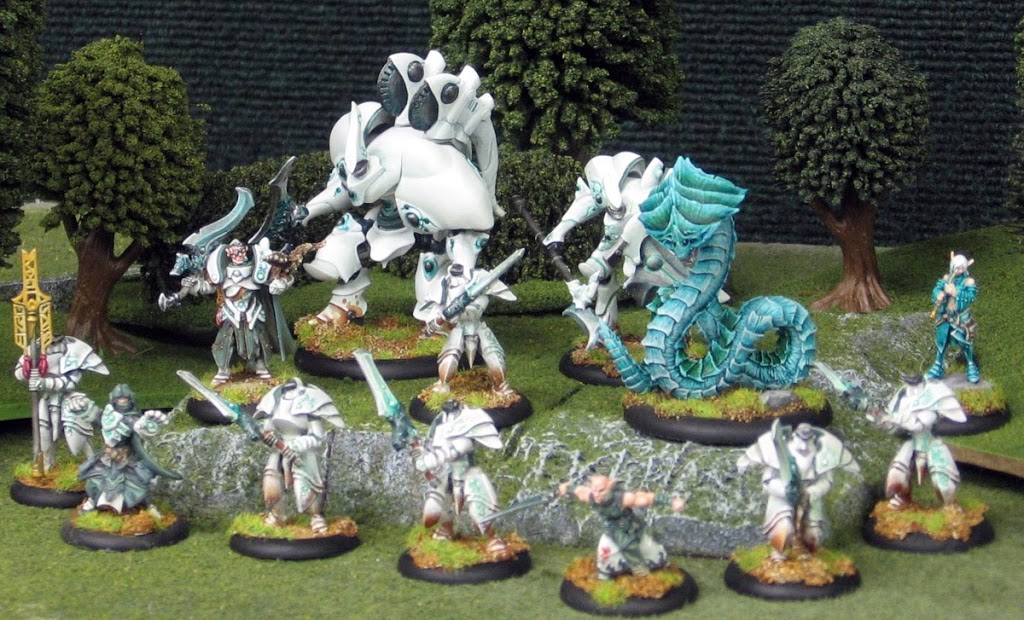 BACKGROUND
Four and a half thousand years ago, the elves were the undisputed masters of Caen.  From the Lyossan Empire far to the East of the Iron Kingdoms, their culture, technology, and magic reigned supreme.  In their greatest work, the elves built a great edifice known as the Bridge of Worlds, a device that would allow their gods to travel to Caen and live amongst their people.  It took over two hundred years to build, but just as the bridge was completed, the their Gods had crossed over, something went horribly wrong.  Whether it was an act of sabotage, or a flaw in the grand design, no one will ever know, but the bridge exploded, trapping the elven gods on Caen, and dooming the Lyossan Empire.  In the instant of destruction, earthquakes rocked the continent and lightning lanced down from storm-wracked clouds. The land was laid waste, and most of the elven people were killed.  Where the Lyossan Empire had stood collapsed into a great abyss.  A great wasteland known as the stormlands still exists to the East of the Iron Kingdoms to this day, testament to the scale of the destruction wrought that day.

The elven gods, along with those few elves who had survived fled West and founded a new homeland, the kingdom of Ios.  For three thousand years the elven gods ruled over their people.  But all was not well.  Cut off from Urcaen, heaven, the spirit realm, the Gods were losing their power.  Eventually, the Gods left Ios, searching for a way home.  Only two were ever seen again.  One group of elves, known as the Nyss, left for the North, following the footsteps of their god Nyssor.  As time passed, they lost touch with the Iosians.  In 140BR, seven hundred thirty hundred years ago, the elven clerics of every god save Scyrah went mad in a single night.  In their madness the priests destroyed themselves and took many elves with them.  Since that time, only the Scyran priests have kept their divinely granted powers, but even those powers have been fading.  The goddess Scyrah returned alone to Ios.  She spoke to none of what had happened, and barely made it back to her temple before falling into a coma-like state.  The Nyss found the god Nyssor entombed in ice in the far north, and guarded him ever since.  The Iosians knew nothing of Nyssor’s fate until recently.  With the disappearance of the elven gods, even more tragedy fell upon the Iosians: children started being born without souls.  These soulless children are emotionless.  They do not cry when born, and are more akin to automatons than to people. Most of these soulless are killed at birth, but a very few are taken by the Retribution of Scyrah.

The Retribution of Scyrah is a faction within Ios that holds the belief that the soulless and the disappearance of the gods are a result of human-practiced arcane magic.  They believe the humans are siphoning power away from the elven gods and that all human wizards must be killed to save the elven race.  The Retribution has historically been seen as a fringe element within Iosian society.  Knowledge that the god Nyssor had not only been found, but had been taken by wizards of the Khadoran Greylords Covenant sent shockwaves throguh Iosian society and catapulted the Retribution to the forefront of Iosan politics.  Now, their forces work openly, striking back at human wizards, and most of all at Khadoran forces.  Their goal, to rescue their God, and to save their people. PLAYSTYLE
The Retribution of Scyrah is the newest faction in the Iron Kingdoms setting.  The faction was introduced this past August, and there are still models and units awaiting release.  Because of their newness, many players are still wrapping their heads around the playstyle’s and tactics of this force.

In terms of basic play, the Retribution may best be described as a ranged force.  Most of their units and warjacks have ranged weapons of one form or another.  They specialize at direct fire weapons, with few AOE’s.  All of this firepower, doesn’t mean they’re slouches in melee.  Dawnguard Sentinels and Mage Hunter Assassins are only two of numerous hard-hitting melee units and solos.  The Dawnguard Invictor unit is currently very popular for having solid melee and ranged attacks.  Casters tend to support the army rather than inflict mass casualties on their own.  The faction is also noted for having numerous magical attacks and means of negating the magical abilities of their opponent, as well as multiple movement place effects and denial abilities.  In terms of speed, the jacks are a very fast speed 6, though most of the infantry units are slower, at only speed 5.  Defense and armor values fall in the mid-ranged values; neither as hard to hit as Cryx, nor as well armored as Khador.  Infantry units and solos are fairly self-sufficient, and have point costs on par with those of Cygnar and Khador.  Like Cygnar, the Retribution has few multi-wound infantry units.  These traits tend to favor a playstyle that wears down an enemy at range and then use speed and movement abilities to strike at the place of their choosing. Retribution warjacks have fewer damage boxes than those of other factions, but they also have a rechargable forcefield that protects their systems.  Weapon system boxes tend to be more spread out within the damage grid, making their systems harder to take out.  Aside from the Phoenix, the warjacks also tend to have less damaging attacks than comparable warjacks in other factions, though buffs from the caster and from Arcanist solo’s can help offset this weakness.  A few of the warjacks also have ways to save or accumulate additional focus, meaning that even a 6 focus warcaster can run multiple jacks without sacrificing too much magical potential. The Mark II rules have re-shaped the tactical landscape for all of the Warmachine factions.  The information described here and in the previous articles is only a taste of what’s possible.  Playstyle’s can change drastically based upon the army compositions chosen by the players.  A ranged-heavy Cryxian force is as possible as a Menoth force with numerous heavy warjacks.  As with all factions, simply changing warcasters can completely alter the way an army plays on the table top.

The best way to start is to choose a faction that appeals to you and to start playing and experiment until you find the models that work for you.  In the coming weeks we’ll introduce the factions of Hordes, Warmachine’s sister game, and one that is 100% compatible with Warmachine.