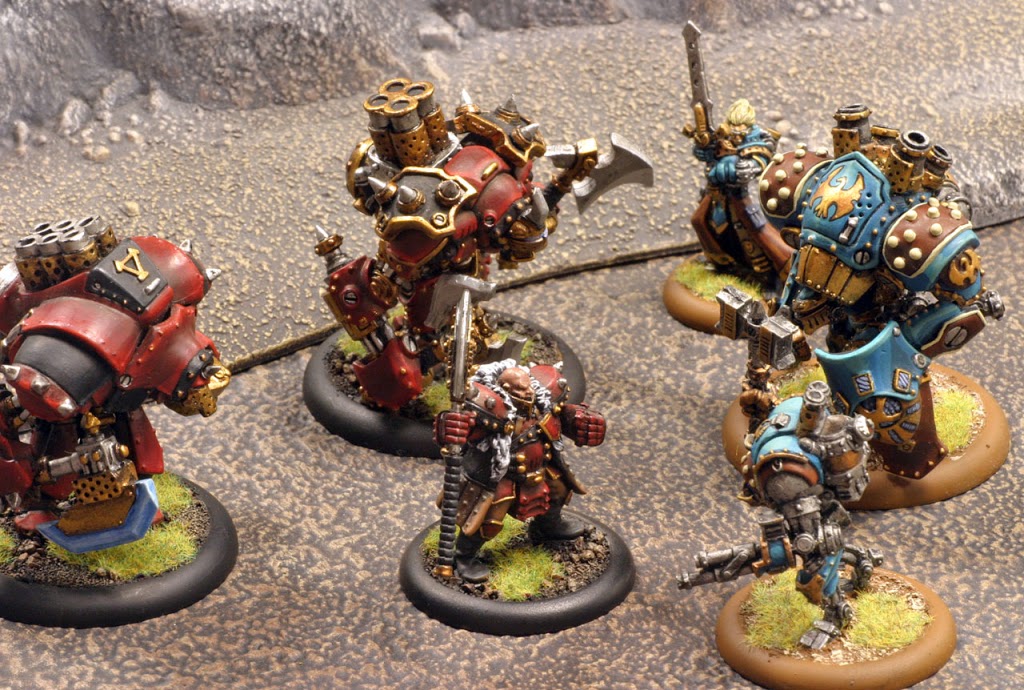 Lux here, to discuss the basic game mechanics of Warmachine for those of you who are unfamiliar with the game.  First off: Warmachine is not a 40k knock-off with robots instead of tanks.  It is a completely different game, with very different game mechanics.  It is ok to like Warmachine and still have 40k be your favorite game.  Warmachine could be thought of as a mix between a collectable card game, such as Magic The Gathering, and a GW system.  This style brings with it an entirely different way of thinking and playing, and it can often take new players several months to really get the hang of the rules.  Lets begin with the similarities to a GW rules system. The Basics
-As with most miniature games, Warmachine uses 6-sided dice and distance is measured in inches.

-Warmachine is a skirmish system, though the models do have front and back arcs, and line of sight is based off of those arc’s, so facing can be important.  Army sizes can be just 10-15 models, even at standard point levels.  Players can also go with an infantry heavy force that has over 50 models on the field.

-Players alternate taking turns.  It is a You-Go-I-Go system.  I activate my entire army, then you activate yours.

-Games tend to last 4-7 turns, or about 2 hours at the standard points levels.

-Speaking of points, armies and units are balanced by point costs.  In a 50 point game, both sides may spend up to 50 points to build their force, with different units costing different values.

-There are spray and template attacks, and templates scatter if they miss their target.  This is similar to the latest 5th edition 40k rules for scattering.

-Every army has a general, known as a Warcaster in Warmachine.  In most games, you will only have 1 Warcaster.  Games with multiple Warcasters per side are possible, but take longer to play. New Concepts
Now on to some of the differences.  I don’t have the space to cover everything, but this will hopefully highlight the major points.

The Warcaster is Key
Warmachine is a skirmish game system with a Warcaster as the general and center of an army.  He, or she is a unique individual with his own spells, own weapons, and own strengths and weaknesses.  Some Warcasters are melee monsters who can take apart multiple heavy Warjacks per turn.  Some are masters of ranged combat, and help your army shoot better.  Others help the Warjacks, or infantry, or sling spells from a distance.  The Warcaster you choose to lead your force has a major impact on the way your army moves and fights.  The synergies a Warcaster brings will often affect the Warjacks and troops you bring to battle.  The Warcaster fuels the Warjacks with magical might, wields vast magical power, and has a powerful one-use Feat that can turn the tide of the game.  The death of a Warcaster results in a loss for that player, meaning that not only do you have to worry about scenario victory conditions, you must also keep your Warcaster protected and alive while still getting the most out of their abilities.  Feats are 100% unique to each Warcaster and can only be used once per game.  One example grants all friendly models an additional attack that round.  Another doubles the speed of every nearby friendly warjack.  Still another knocks down all enemy models within 14 inches, making the opponent much, much easier to hit with both shooting and ranged attacks.  Good, tactical use of your Warcaster’s feat can often win you the game.

Unit Sequencing is Critical
The turn system is slightly different, and takes some getting used too.  In 40k your turn is divided into movement, shooting, and assault phases.  In Warmachine you resolve ALL of a models/unit’s actions before moving onto the next model/unit.  Think of it as having one of your tactical squads resolve all of its movement, shooting, and assaults before going on to your next unit.  This system makes it possible for one unit to ‘clear the way’ for the next, or to stack spells or buffs onto another unit to help that 2nd unit do its job better.  Say you really want to kill a warjack, but you know its too tough to take down with your available forces.  You could have several of your units with ranged attacks activate first and shoot the warjack to soften it up.  Then you could have your Warcaster cast a strength/damage enhancing spell onto your melee unit, all so that when you do activate that melee unit and charge in, they can take down the enemy Warjack.  It’s a different way of playing and a different way of thinking.  Learning this combo system took me awhile to get the hang of.

Nuts and Bolts
Statlines will feel familiar to 40k or Fantasy players, but with a couple differences.  Speed and Strength are joined by Melee Attack (MAT), Ranged Attack (RAT), Defense (DEF), and Armor (ARM) values.  Warcasters also have a Focus (FOC) stat, showing how much magical power that Warcaster commands that can be given out to the warjacks, or used to cast spells.  Most Warcasters have between 6-8 focus.

The system is a 2d6 system, rather than a d6.  In 40k, a model might need a 4+ to hit another Marine in combat.  In Warmachine, you take the melee attack Stat (MAT), add 2d6 to it, and then compare it to the opponent’s Defense to see if your model hits, needing to at least equal the DEF value  For example, a model with a MAT of 6 would need to roll 7 or higher to hit an opponent with DEF 13.  Terrain, spells, feats, and other factors can add to a model’s defense and armor, or reduce those of the opposing force.

The Role of Focus
To get a little more complicated, the Warcaster can give focus to his or her Warjacks.  Each focus can be spent to improve a ‘Jack’s on-field performance.  Spending a focus point allows a Warjack to charge, gaining a boost of speed and an additional damage die on the damage roll of its initial attack, to run, or to “boost” a roll, letting the player roll an additional d6 in order to (hopefully!) improve an attack or damage roll.  Focus can also be used by the Warcaster to cast spells.  Each Warcaster has his or her own unique spell list, helping differentiate the playstyle and strengths of one Warcaster from another.  Spells tend to cost between 2-4 focus to cast, and are automatically cast once the focus is spent.  One of the tactical choices faced when playing Warmachine is deciding how much focus to give to the Warjacks and how much to keep on the Warcaster to cast spells and improve his or her own attacks. Say Goodbye to Armor Saves
Speaking of statlines, there are no armor, cover, or invulnerable saves.  I know, I know, this is a shocking and appaling concept to some of you.  I must be insane, you say!  When a model is hit, you roll 2d6, add the power of the weapon, and compare the value to the opponent’s Armor (ARM) value.  Every point above the ARM does a point of damage.  So, for example, you’ve hit an ARM 16 infantry model with 8 wounds.  The POW of your weapon is 12.  If you roll a 9 on 2d6, then you have done a total of 21 points, or 5 over the model’s ARM, leaving that 8 wound model with 3 wounds remaining.  This system means that if an ARM 15, single wound model gets hit by a POW 19 attack, that infantry model is dead, without even needing to roll 2d6.  Too bad for that guy!

Say Hello to Warjacks
Warjacks themselves are POWERFUL models!  They have some of the highest damage output in the game, can take the most damage before being destroyed, and are generally the only models that can perform awesome Power Attacks like slams, throws, arm locks, and trampling through opposing infantry groups.  When a Warjack is damaged it doesn’t simply take wounds, theres a chance the attack can lop off an arm, or take out the cortex (the magical ‘node’ that allows a Warjack to be allocated and use focus).  The attacker rolls an addional d6 to determine which column on its damage grid is hit.  Damage boxes are then marked from top to bottom by column going from left to right, and looping back around from the end of column 6 to the beginning of column 1.  This adds an additional element of tactics and luck to the game, since having a main weapon taken out early can seriously hamper a Warjack’s performance on the field.  Some models and units even have the abilities to choose which column they damage.  Fortunately, every faction has access to cheap mechanics that can quickly and easily bring a Warjack up to fully operational status.  Although most factions have solos that can help improve a Warjacks performance, the Warjack will still need more support to perform at its best than a unit of infantry.  Light Warjacks are less durable and powerful than a heavy, but tend to be faster.  Some even have arcnodes, allowing the Warcaster to channel his or her spells through the Warjack, and thus, extend their range.  Warjacks have unique weapons loadouts, meaning the player should choose the ‘Jack’s that best suit their battlefield needs.  Plus, a couple heavy Warjacks make great centerpieces to an army!

But enough from me!  Reading a description will only take you so far.  The differences in the rules compared to other miniature systems make for a fast and exciting game that will test your tactical acumen in a way that’s very different from 40k or Fantasy.  Why not download the free  starter rules, proxy a couple of models and try them out for yourself!  The demo rules include stats for the Cygnar and Menoth starter boxes.  You can find those rules HERE.  Play a couple games and see what you think!