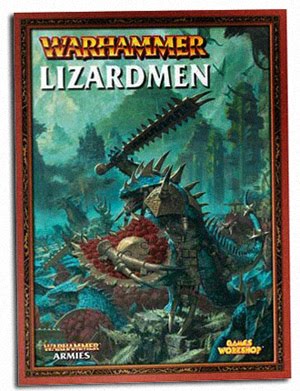 Jwolf here.
First, a little walk down memory lane – from my perspective. I started tabletop wargaming back when all that existed was historical miniatures. At the time, most models had to be carefully painted, because only the paint job really gave any differentiation in the tiny and often self-cast soldiers on the field. Then along came something totally new, something called Warhammer. The miniatures were a lot bigger, and there was a lot more detail. So I painted up a Warhammer army. I had my Roman Legionnaires, with skirmishing Samurai Archers, and screening light troops – Aztecs. Because this was not an historical game, so I was having fun making an impossible army. I finally got my host all painted, and marched it out for a battle. My opponent puts down one model – a Red Dragon. The Dragon flew across the board, breathed fire into my central block of Legionnaires, and every model in my army broke and ran away in Terror. Months of work, over in less time than it took me to pack the models back into a shoebox. Some of those models ended up repurposed, but most disappeared into who knows where, and thus ended my Warhammer gaming career.
Some time after that, I played a few games of Rogue Trader, some 2E, and a whole lot of 40K from 3E onwards. I never looked back at Warhammer, until last year. I vowed to give Warhammer, now Warhammer Fantasy Battles, another look. So in June of this year, I borrowed Orcs and started playing… Orcs are nowhere near as retarded as they were in the beginning, but having a 1-in-6 chance for most of the units in your army to stand around doing nothing is no fun. So when the new Lizardman book came out, I built myself a new army.

Skink Priest, Lvl 2, Plaque of Tepok and War Drum of Xahutec on an Ancient Stegadon with the Engine of the Gods

Saurus Scar-Veteran, Sword of Battle and Charm of the Jaguar Warrior

16 Temple Guard, Full Command
Sun Standard of Chotec and Champion with Sword of the Hornet

Army Tactics
I love this army. Even playing Warriors of Chaos, 6 total drops mean I’ll be on the table first for the +1 on the roll to go first most of the time. I deploy simply, with the large unit of skirmishers line up pointed towards the hill on the opponent side, so I can put the Scar-Veteran with them, to hopefully fly across the board. I always put a hill near the center line, and my Slaan / Temple Guard are positioned to move onto the hill, avoiding shots from enemy Cannons and the like. The Stegadons stay near, and either lurk around forests or hills, avoiding getting shot dead early (yes, there are a lot of warmachines in the local WFB scene). The Saurus deploy to support the Temple Guard, the Cohort is prepared to redirect, as are the 10-man Skirmishers.

Obviously the main threat here is the Slaan. In my last game, with his Temple Guard all destroyed (and after having taken the last 2 wounds off a Hellpit Abomination with the Flaming Sword of Rhuin), the Slaan killed a dozen Skaven and a Grey Seer (with at least 10 wounds through Banehead) in a single magic phase, even facing 6 dispel dice. Having the ability to know every spell from any of the 8 basic schools, and generating enough dice to be able to successfully cast 3 or 4 every single magic phase, the Slaan will land telling magic damage almost every game.

As a source of magic defense, the Slaan is also impressive. The Becalming Cogitation allows him to remove 6s from one enemy Wizard within 24”. The Slaan also has the ability to redirect a miscast onto an enemy Wizard, the Slaan can turn his own failure into even more damage.

But the Slaan isn’t the only killing tool in this army. His bodyguard are impressive, with 2+ saves and 2 base attacks, as well as stubborn on a cold-blooded 8, and people run right up to them, to try and stop the Slaan from burning them.

The Skink Priest has 3 spells from the Lore of Heavens, and his Engine of the Gods deals reliable damage in a large radius from turn 3 on. I try to keep him from combat, as once the Priest is knocked off the top, the Ancient Stegadon is a lot less useful, though still capable of breaking enemy units.

The Skink Chief has a pretty terrifying 2d6+1 S5 Impact hits on the charge, but I find that using the Bolt Thrower against monsters and holding him back means he doesn’t just get peppered and die, and he makes a very good deterrent for those pesky flyers and Light Cavalry.

The Scar-Veteran can fly on a Bound 4, and uses that to go after Warmachines and light troops. With 5 Strength 5 attacks, he can easily beat most unranked units, removing a lot of the shooting and flexibility from enemy lists.

Saurus Warriors have an impressive 2 attacks each. With spears, a frontage of 5 can deliver 21 attacks at S4, which means that these are excellent flank guards and demolish riff-raff.

Skinks are murderous. Poisoned weapons are fantastic for killing Elves and Monsters, both of which are in abundance locally.

~So there is my Warhammer Fantasy list, and my thoughts on how I play them. Am I an expert? No way, but I’ve enjoyed the return to playing Warhammer as a break from a decade of focus on 40K. I welcome comments from more experienced Fantasy players and the peanut gallery. Until next week, try to have some holiday fun with your toy soldiers, okay?