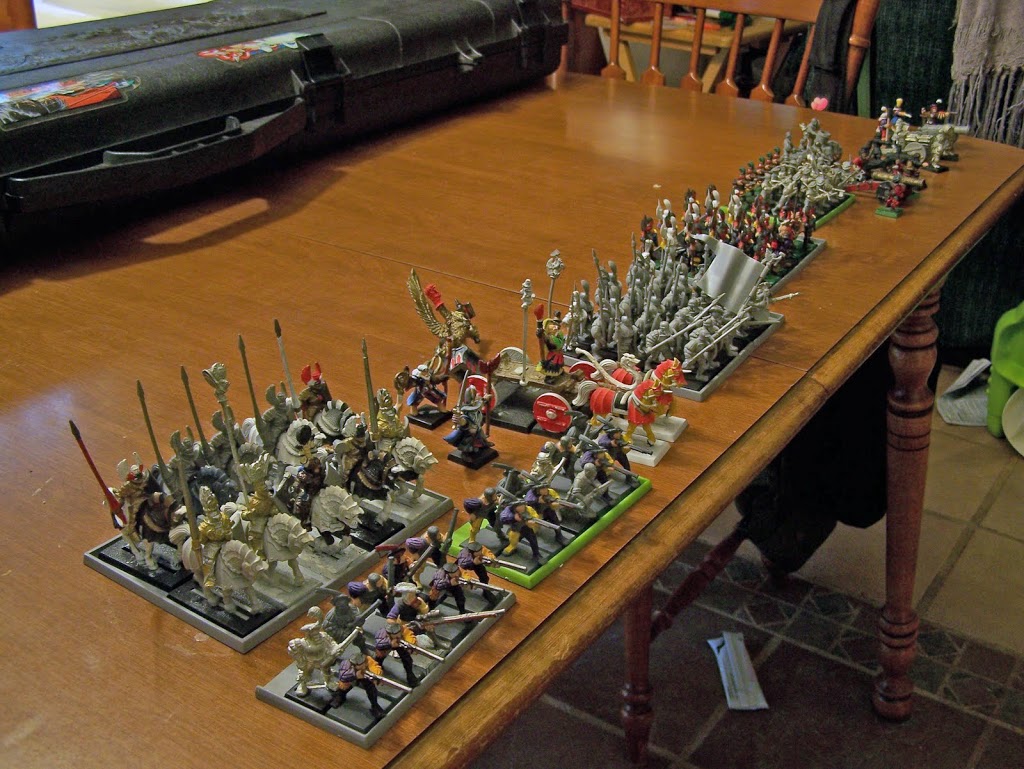 Well there it is in all of its procrastinated glory. I have even more unpainted figures for the Empire, but this is the army that I will be painting up according to the list that I drew up in my last installment. As you can see my force is in various stages of paint, from bare plastic/metal all the way up to being done.
If you notice there are several different paint schemes going on and it wasn’t until 1997 that I decided on a single color scheme. For this army I chose to paint them in the colors of Ostermark, which is purple, yellow, and white. When they are fully painted the combination is pretty fantastic. I am also a fan of the fluff for this province, which involves Mordheim, the former capital of Ostermark, and some interesting references in the current army book. I will start with striping the red and black cannon along with its crew because it doesn’t match anything in my army. The paint on the cannon/crew is also severely chipped, so repainting is pretty much my best option. I am also going to strip the Grand Theoginist because I want a fresh start on him. I will also strip the halberdier command group because they are severely chipped. The one draw back to stripping figures is that it always feels like you’re taking a step away from your ultimate goal, but I always feel that the results are worth it. The next big part of the plan is the order I want to paint these in. I think I’m going to start with the halberdiers. They require the least amount of work and I can turn them out pretty quickly. After that I will prioritize my painting by what has paint on it. I will paint up that which is has more paint on it first, and that way I will feel like I am putting a dent in this project. When I have the core units completed I will work on the artillery pieces and then finish it all up with the Lord and heroes. Once the painting is complete, I will be making a display board for this army. I will be using a different approach to army painting than Goatboy uses. Goatboy uses a lot of dry brushing with glazes over the top. This is a great fast method and he can turn out armies faster than anyone I know. I will be using successive lighter colored layers of paint with glazes over the top, when needed, to smooth the transitions. This is not the fastest way to paint an army, but I like the look of it more. I’m also hoping that it will garner some good painting/soft scores to make up for the fact that it isn’t Demons/VC. I am going to replace a few models in this army while I am at it. I’ve really liked the look of the most recent Empire Wizards plastic boxed set, so I will definitely be getting at least 1 box. I will also be eliminating the Battle Masters cannon from my army because it looks incredibly anemic next to my other war machines, and I’ll probably do this right away since I have an unassembled cannon on my shelf. Over time, I will in all likelihood replace the Battle Master figures with newer figures because they do look smaller than the other figures, but I will be keeping the out of print classic metal figures because they are like a badge of honor. That wraps up this installment. Next time I’ll be stripping paint, and priming the bare metal/plastic if the weather allows. Until then share with us your progress on your 2010-2011 tournament season armies. If you have any suggestions for me about tackling this project I’m all ears.