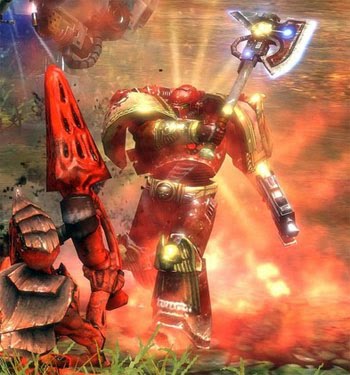 Hi all, Jwolf here. In my continuing efforts to look at ways to bring all-comers lists that are good at killing Tyranids, I present this 2000 point Space Marines list. I might change some things around to put Meltas in the Tactical Squads, but I might not do it, either.
First, the things I hate in Tyranid Lists:
-Tervigons.
-Zoanthropes.
-Billionty Little Bugs.
What kills these things?

Space Marines, 2000 Points (Explained)
Darnath Lysander – Can’t be instakilled, Instakills everything under T6. This guy was already seeing a whole lot of action around our FLGS; Tyranids make him that much better. Making the army Stubborn isn’t that big of a deal against Tyranids, but it’s awesome against Psyker Battle Squads, so it all works out.

Space Marine Librarian – Epistolary, Null Zone, Might of Ancients. He’s faster than most of the things he can ever go before anyway, and MoA lets him kill Carnifexes on almost any charge. He’ll grab a ride with a combat squad. He rushes forward in a Rhino to get as many Zoanthropes in Null Zone for turn 1 as he can without getting into Shadows of the Warp territory.

1x 7 TH/SS Terminators in a Land Raider Crusader (MM, Extra Armor, Storm Bolter). These guys provide Lysander with his ride and head straight in for the kill (avoiding Zonathropes where possible), but hopefully we kill a lot of those quickly.

2x 10man Tactical Squads, Missile Launcher and Flamer, in Rhinos – These shoot things and the half with the Rhinos zooms forward to burn holes into the swarm.

1x 5man Scout Squad, 4 Snipers and a Missile Launcher – Almost just a point sink, but they’ll take potshots at approaching bad things outside of Synapse and contribute to the overall anti-T4 party. This is the first piece I would swap out for something else; I just like Scouts for bug-hunting.

2x 1Landspeeder, Multimelta and Heavy Flamer. Honestly, these belong in every Space Marine army. Speeders in this configuration are always good to have.

1x Predator, TL Autocannon and Sponson Heavy Bolters. Again, another piece of gear that belongs in every Space Marine army. Good for the points, lots of shots. Great against light vehicles and infantry.

1x 10man Devastator Squad, 4x Missile Launchers, in a Rhino. Combat Squading these guys to get two sets of two Missiles if there are lots of T4, and keeping them together to throw it all at Big Bugs if the T4 count is low. The Rhino either forms part of the wall or is a good transport for needful usage. I like jumping one of the Tactical Squad Missile units into this Rhino for protected scoring.

1x Thunderfire Cannon. These are often semi-effective or less, but the amount of Tyranid Long Range shooting that can deal with these is somewhat limited, and anything shooting at this on turn 1 is not shooting things that are more important to have undamaged. And honestly, these can do some damage if left alone and/or able to find a good piece of terrain to give them cover. This is the second item I might trade out for a Whirlwind and some upgrades for the Tactical Sarges, or something.

THE PLAN
The plan is simple. Kill all the bugs, place scoring units on objectives. By the way, if you ever think I have some tricky plan other than just killing everything, you’ve misread the author. Killing all the Zoanthropes first is generally a good decision for any Power Armored force.

This week I also plan to try some apostate non-mechanized SM and CSM forces against the Tyranids and see what happens. I know depending on 3+ armor is considered a fools errand in some quarters, but there are only so many shots coming out of a Tyranid force (it’s still a lot, granted), and most of those are AP4 or worse. I’ll give some reporting about that next time.

My fellow Chapter Masters, speak your peace and let us focus our Astartes minds on how to best crush the vile Tyranids menace from our space.