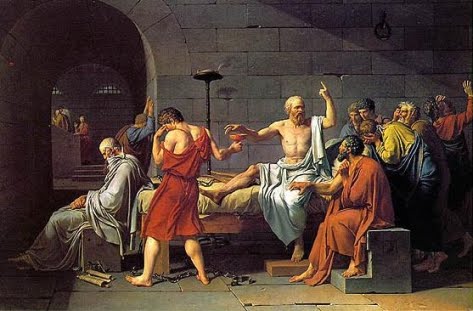 The Death of Socrates by Jacques-Louis David

I’ve been planning for BoLSCon 2010 for quite a while now, and looking for the most reliable way to generate the best player as the winner of each tournament event. Reviewing the results of other tournaments, considering my personal experience, and consulting with other tournament organizers, I found three major issues that I had to solve. The first was generating a fair scoring system, which I believe I have done (and results from 2009 seem to confirm that). The second was making sure that my judges were capable and competent, and this is one area where I feel particularly lucky. Not only do I have a good number of great players available locally, but they are willing to help and have volunteered to do so. The third issue is the thorny one, the one over which I have the least control and the one that almost invariably causes the most issues for tournament organizers – players have to play fair and fill out their score sheets honestly. These ethical and technical issues are the subjects I will attempt to illuminate tonight. While I will discuss both from a tournament organizer’s perspective, certainly the elements of fair play include games in your garage with beers and nothing on the line for anyone concerned.

Players have two basic recording issues in almost every tournament that is run in the US, recording the battle points and a rating for sportsmanship. Many include a score for composition and some include an appearance rating as well (and these are sometimes included in a single score, or included in the sportsmanship score somehow).

The scoring of battle points is easily verified – either one sheet is given to both players, they record the scores and turn it in, or both players turn in score sheets, and the judges check them one against the other. Mistakes are made, but we rarely see problems with battle points being in contention, and when we do, generally the judge is called to the table and can verify the situation for themselves. Mostly battle point questions are errors that can be solved via technical improvements, and are thus uncommon.

Sportsmanship scoring is the notorious bane of fair scoring – the allegations of chipmunking and collusion are incredibly widespread and practically a “known to be true” by many gamers, even though actual investigation of these claims leads me to find that such allegations are almost always false. For BoLSCon, we have a very simple system of Bad/Good/Great, and any score other than Good is investigated with the scoring (and perhaps the scored) player. It also helps that our judges will not stand in the corner or hang out at the scoring table, but instead move around the floor and can identify the tables where there seems to be acrimony and the tables where people seem to be having a great time; this observation makes verifying the scores easier. Other tournaments use similar mechanisms and verification techniques, while some use checklists, value norming, and other methods to reduce or prevent bad soft score reporting from tainting their overall results. There are those who say that soft scores have no business in tournaments, but most of those also advocate judges throwing out players who violate some code of conduct that is often nebulously defined. While I would remove a player from a tournament for making violent threats or actions, or certain other behaviors, I would always speak with the player about their (non-criminal) behavior and allow them a chance to recover. In a no soft score system, that behavior either faces no sanction or removal; I prefer that a codified and graduated response is in the hands of the players themselves. Overall, sportsmanship scoring is an effective and valid tool for making the gaming environment follow the Most Important Rule if you have competent, fair, and active judges.

Composition scoring is a lot harder to police, as giving players the ability to rate opposing armies calls on the players to make a judgement call. I have found that my feelings on composition are affected by the outcome on the tabletop, which means that for me, personally, composition scoring is something I should do before the start of the game or not at all. There is not much to do on the behalf of making composition scores anything other than purely subjective, but the ideas I like include averaging, blind comp scoring, and substituting a judge’s score for the lowest and highest scores given.

Appearance scoring by participants is best left to a Player’s Choice award and not included in the overall scoring for a tournament. The complete subjectivity of appearance makes judges’ oversight inherently nigh-impossible, and a checklist system means that a judge would be better off giving the score instead.

So if we can handle the scorecard issues, we only have the tiny issue of player fairness to address. I’ve identified a few areas where we can take action as tournament organizers and a few we must leave to the players to help us weed out.

The tournament organizers can deal with the following effectively:

Shady Listing – Most people use some sort of file with information included when building their armies. I won’t mention the most popular solution by name, but it starts with an A and ends with rmybuilder. In my experience, people who just give the names and numbers but no statistics or details for their units and upgrades are trying to generate an advantage by reducing or obfuscating the information provided to their opponents. I do not consider this ethical, and I also consider it a significant delaying technique – if you give your opponent incomplete information, you are encouraging the game to be delayed while they gather the information to play you in an informed manner. To solve this issue, I encourage all tournament organizers to require list submission and provide army lists with complete information for all games. If you are playing with friends and you both agree that being tricky with lists works for you, that’s great and have fun. But if there is no agreement, is tricking your friends to win really a good thing? I do not think so.

Intentional Delay of Game – Active judges will see which games are going too slowly, but it is hard to determine if the player(s) are just slow or are intending to do so. The clock is a part of competitive games (we simply cannot have unlimited time for rounds and have anything like a schedule), but it is not a part of the game itself. Players that use the clock to gain advantages for themselves have to be warned to change their behavior or the validity of the tournament outcomes comes into question. It is incumbent on each player to play in such a manner as to allow the game to reach the end without time being called, to the best of their ability. Judges must intervene to assist players in playing in a timely fashion – last year we assigned assistants to players as need be to help them physically move more quickly as needed.

Abusive Behavior – We all know stories of players who treat others badly, using intimidation and other non-gaming techniques to try and gain advantage. While anyone can lose their cool during a game, judges have to look for patterns of behavior and intervene where necessary, up to and including removing players from a game (or tourney, in extreme cases) to prevent abusive behavior from ruining the game. This is an area where I have to control myself – if I perceive my opponent as delaying the game, I tend to get impatient and aggressive. I have never gotten to the point of needing judge’s intervention, but my ire does become obvious. Player reports help, but generally anyone exhibiting this behavior will be noticeable to active judges.

Players have to police the following:

Dice Rolling – There are players who use special dice for different rolls; that’s not acceptable in a tournament, even if it is just your superstition. There are players who flop their dice down, or try to use “practiced rolling” (just plain cheating) to gain an advantage. Judges cannot be at every table to catch these things, so players have to notice and report such behavior, and then judges can take the appropriate action.

List swapping or secrets – There are tournaments that allow closed lists, most notably in Warhammer Fantasy Battles. Most tournaments are open list and full disclosure, but some players will invariably try to skirt these rules. Players have to report this as well. I have had a player give me one list and then proceed to play another; he had the models for both in his case and pulled out the ones he felt would be better against my army as suited him – no judge would have even had a chance of catching that without player assistance. (I let it go, as we were in the final round of a tournament and neither of us was in danger of winning anything. At the time, I figured anyone who needed to win badly enough to cheat in what amounted to essentially a friendly game should get the win. I have a different opinion now.)

Bad Faith Measurement – Again, this is one of those things that players will notice, and a judge might notice, but expecting a judge to catch the behavior in the first place is unrealistic. Once a report has been given, judges are much more likely to catch additional incidences of this behavior. Bad faith measurement is things like running your tape measure out 12” to measure your 6” move, coincidentally measuring the distance to a possible assault target, or simply moving units too far.

Rules Abuse – Some players will try to milk every advantage they can out of the rules, including some that are not there to milk. While you are likely to need a judge to handle this, a judge will not intervene without a player question. Examples include forgetting that an item is one use only, applying a special rule where it does not apply (i.e. Preferred Enemy against vehicles without a weapon skill), and an almost unlimited number of other things. Even if you cannot explain what the rules issue was, it is helpful to the tournament organizer if you report that you felt there was something fishy about your opponent’s behavior in the game – we can have a judge watch the next game, for instance.

I’m sure that my list isn’t exhaustive, and I’d love to hear what sorts of things you would like to see tournament organizers (and your friendly local gaming store) be on the lookout for and deal with in the realm of ethical player behavior. I know that someone will mention hygiene – while that is an issue, I have only met a few people who actually might use their own lack of hygiene in an unfair way in tabletop wargaming, so let’s just leave that one out, okay?