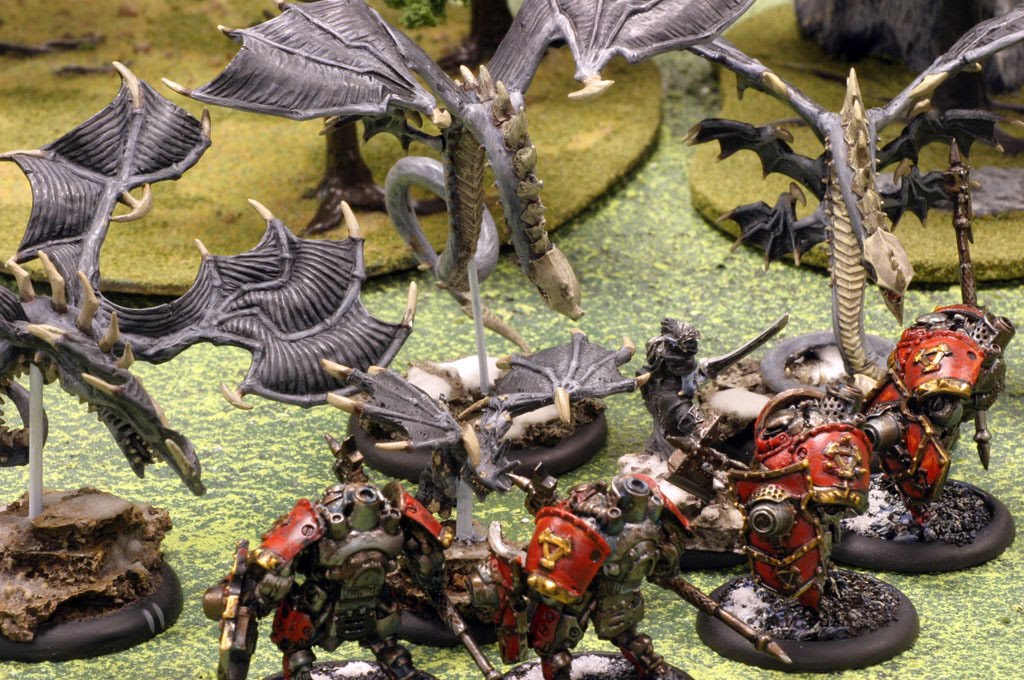 Hailing from the northern arctic wastes, a Draconic army advances with twisted dreams of conquest.  Composed of blighted elves, ogryn, and draconic beasts the dread Legion of Everblight is here to consume the Iron Kingdoms!

Background
Toruk is not the only dragon in the Iron Kingdoms.  Millennia ago, Toruk divided His own athanc, creating numerous children.  Instead of serving Him as He had planned, they attacked, seeking to gain more power for themselves.  One of those progeny was Ethrunbul, also known as Everblight.  From the beginning, He was one of the smaller progeny (a relative term, since all dragons are HUGE).  Everblight refused to work with His brothers as they plotted to destroy Toruk, choosing instead to scheme and manipulate from the shadows.  All dragons have a blighting effect on the land and creatures around them, but Everblight is the only dragon to learn how to control that blight.  He made a compact with the ancient empire of Morrdh, providing them with blighted Warbeasts bred for their wars in return for safety and access to their magical research.  Toruk eventually discovered Him and nearly destroyed Him in a battle in which Everblight only barely escaped.  Later, Everblight worked His way into the caverns beneath Ios and slowly worked to poison the minds of the elves above as a means of consuming Scyrah and gaining the power of the goddess for Himself.  Again, He was discovered, and the Iosian’s destroyed his mortal form and magically sealed His Athanc away where it could never re-grow into a full dragon.  It should have been the end.

Everblight’s soul was trapped, but He used His powers of mental control and dominion to poison the minds of his watchers and have Himself moved out of Ios and onto a mountain in the far North.  There, he came in mental contact with an Ogryn slave working in some nearby mines.  Everblight’s mental powers dominated the Ogryn, Thagrosh, compelling him to escape the mines, scale the mountain, and free Everblight.  But instead of reforming His draconic body, Everblight had a new and more devious plan.  Thagrosh was compelled to cut open his own chest and drive the Athanc stone inside.  In effect, this merged the two beings, giving Thagrosh sorceress powers, and giving Everblight a means to remain hidden inside a mortal shell while enacting His plans for dominion.  The first target, on that road was the Nyss winter elves and the god Nyssor, frozen in ice.  Again, Everblight used His mental powers to dominate the minds of mortals, winning some Nyss over to His side without firing shot.  Those elves then began to work against their fellows, poisoning water supplies with blighted essence, and “removing” those most likely resist.  When Everblight/Thagrosh finally moved, most of the Nyss were already under His thrall.  An entire culture fell within days.  Some of the Nyss gave themselves to Him willingly.  In return, Everblight gave them pieces of His own Athanc, granting them sorceress powers and the ability to be in full telepathic communication with Him as well as the other Warlocks.  So far, Everblight is the only dragon that has learned to divide its Athanc without those pieces spawning new dragons.

An army of blighted Nyss and Ogryn has been forged, with blighted Warbeasts at its head bent on destroying the other dragons and conquering the globe.  One dragon, Pyromalfic, has already been consumed, its strength making Everblight even more powerful.  Nyssor remains hidden, but the dream of consuming an actual God has not died.  The Circle of Orboros was unable to defeat Everblight’s forces while they were still weak.  Now, Cryx, the other dragons, and the Iron Kingdoms are waking up to the threat that approaches from the North.  It will be a long, cold winter. Playstyle
Ahh, the Legion of Everblight, my faction of choice.  I started with these guys when Hordes was first introduced and I never looked back.  This faction is all about speed, the alpha strike, shooting, and glass cannons.  Cold damage and cold effects are also common.  Nearly every model in the faction is at least SPD6, with a few being SPD7!  Flight and all-terrain/pathfinder, and other rules and abilities that help them get that first strike are commonplace.  Most models also hit very hard, whether its the P+S 11 weaponmaster Swordsmen, the Angelius heavy Warbeast with a P+S 14 armor piercing attack, or the lowly Shredder that can spend 1 Fury point to have boosted melee attack and P+S 10 damage rolls!  This faction is all about hitting their opponent first, and hitting them so hard that they can’t recover.  Shooting helps them along the way.  There are very few AOE attacks, but roughly 1/2 the Warbeasts have a spray or a ranged attack.  A cheap and effective Archer unit can send arrow after arrow raining down on the enemy.  The Advanced Deploying, Stealthed Strider archer unit allows the Legion player to start picking off his foes right from the beginning of the game.  Most of the shots are not all that powerful (POW 10 is common), but they are plentiful.  Remember I said the faction is fast, well they need that speed, because although high defense is the norm, once hit, most infantry and Warbeasts will fold like a paper cup.  The faction relies on its speed and mobility to choose where and when to strike, to make that strike with overwhelming force, and to punish the opponent for any mistake.  On to some of the specifics.

The casters follow the faction themes: high defense, lower armor, and good speed.  Most of the spells and animi from the Warbeasts buff the faction in one way or another, with one or two upkeeps per Warlock.  Spells and Feats that increase defense, allow movement after an attack, or improve a models’ ability to hit are common.  One important note is that nearly every caster is good at running multiple Warbeasts, even though several of the Warlocks are only Fury 5.  The reason for this is spells and abilities that improve Fury efficiency, such as Lylyth’s Blood Lure, which allows her beasts to make free charges against models she hits with her ranged attacks, and Shepherds and Forsaken.  Shepherds and Forsaken are solos that dramatically improve the Fury management abilities of the army.  Forsaken can take up to five Fury off of a friendly Warbeast and then use it to fuel their own blighted aura attack.  Shepherds allow the beasts to Force outside the Warlocks’ control area.  They can also heal Warbeasts and either add or remove Fury from them.  Both solos are cheap, and both can be taken in multiples. Thagrosh (both regular and Epic versions), Absylonia, and Rhyas are the melee Warlocks.
Lylyth (both versions) is the ranged Warlock.
Saeryn, and Vayl are the support Warlocks.

As I mentioned above, most Warbeasts in the faction have some form of all-terrain abilitiy.  There are only four heavy Warbeasts at the time of writing, the Carnivean, the Angelius, the Seraph, and Typhon, a character Warbeast.  The Carnivean and Typhon are the brute’s, designed to wade into melee and take out the enemy with multiple high strength attacks.  The Angelius is more of a scalpel.  It’s SPD7, Wings, and Reach give it a massive threat range, and it can put a serious hurt on anything with a medium base or larger.  However, it will struggle to take out a heavy Warjack or Warbeast on it’s own (try running two together!).  The Seraph is a light gunship with a 10″ strafing ranged attack, and one of the best animi in the game: a 2″ place effect.  Use the Seraph to support the army with its animus and to put a serious dent into grouped up infantry or light Jacks/Beasts with its multiple strafe shots.  Several light beasts give the faction some umph, from the Nephilim variants, to the stealthy Raek.  The light beasts don’t have the hitting power of the heavies, but they are great at getting wherever they want to go, and often providing a great animus.  The lesser Warbeasts, the Shredder and Harrier, round out the selection, and are great little guided missiles, as well as a cheap means of providing fury in an infantry heavy list.

Because the faction doesn’t have too many buffing effects, the infantry tend to be self-sufficient and pretty specialized in their roles.  Swordsmen and Legionnaires are the baseline infantry.  Archers and Striders provide ranged support.  Warmongers and Warspears provide the army multi-wound blighted Ogryn (and some cool models too!), with the Warspears being more defensive with a ranged attack, and the psychotic Warmongers being all about mixing it up with mobs of infantry.  The Raptors are the only light cavalry in any 25mm+ sized wargame I’ve played that actually function the way light cavalry should.  They are awesomely fast, and perfectly suited for harassing the enemy at range, and then screaming in on the charge when the timing is right.

The solos are a diverse mix.  You have solos that help buff infantry units, like the Warmonger Warchief or Strider Deathstalker, solos that help faction synergy, such as the aforementioned Forsaken and Shepherds or the Sorceress, and solos/units like the Incubi and Spawning vessel, which literally “feed” on the death around them to use their own abilities.  Incubi are parasitic models that are only placed by the player when one of his own models dies.  The Incubus can then act on its own for the remainder of the game.  The Spawning Vessel can collect blood tokens from destroyed models and then use those tokens to make new Lesser Warbeasts in-game.  Both take some finesse to utilize properly.

And that, dear readers, is the Legion of Everblight.  These guys are great fun to play with lots of characterful models.  They’re also the only faction that has a Warlock with a ‘pimp hand’, and isn’t that reason enough to play them?