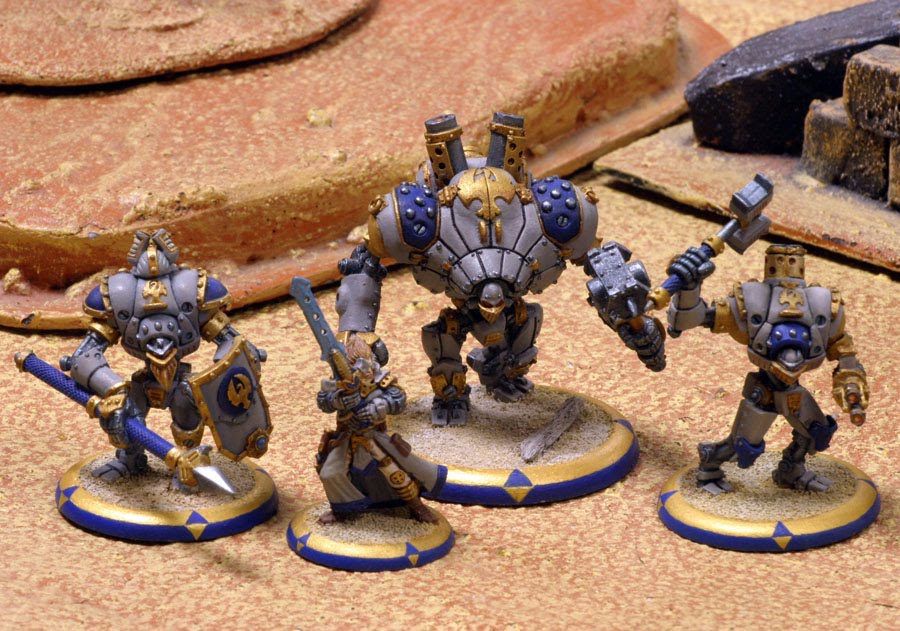 The battle boxes will form the core of many peoples’ first armies.  If you’re new to the game, playing 5-10 games with just the battle box is a great way to get the hang of the turn order as well as how to manage your Focus, Warjacks, and Warcaster.  This is the start of a series of articles covering some basic tactics and synergies for each of the starting forces with one article for the Warcaster and one for the Warjacks in each box.  Although the Retribution faction doesn’t have a starter set, we’ll still cover them for some of the most common starting points.

First Off: Cygnar
It’s everybody’s favorite faction with one of the least heralded Warcasters- Stryker.  The box contains Stryker, an Ironclad heavy Warjack, a Lancer light Warjack, and a Charger light Warjack.  This is a very, very solid core of an army.  There are few Cygnaran casters who don’t like to have at least one arcnode, the Ironclad is a solid cheap heavy Warjack, and the Charger can be devastating in the right situation.  Stryker himself is a great toolbox caster.  He’s not flashy, but he can deal with pretty much any situation thrown his way.

We’ll spend an entire article just on the battlebox ‘Casters.  Why?  Because most Warjacks and units are pretty straightforward, but the Warcaster affects everything.  It’s the Warcasters’ spells and powers that will determine how your army fights.  For Cygnar’s battlebox, you’ve got one of the best Warcasters around.  Stryker is a ‘jack-of-all-trades’ type of Warcaster.  He’s got 6 Focus, respectable in melee, can throw out a few offensive spells, can de-buff the enemy, and can support his units.  Speed 6 with MAT 7 and a P+S 13 sword aren’t the best in the game, but combined with his Focus, it’s normally enough to take out an enemy Warcaster or Warjack.  His DEF and ARM stats are average, but not good enough to really keep him safe from a determined opponent.  Because he doesn’t have the greatest stats, you’ll often find Stryker is best when played as a supporting caster- helping his army win the game, and only mixing it up when necessary.

Arcane Blast is a 3 Cost offensive spell that strikes all targets in a 3″ AOE.  It’s situational due to its high focus cost, but it gives Stryker a nice way to attack solos and units with very high DEF or Stealth.  The downside is that this suddenly makes it a 4 Focus spell, since you’ll need 3 to cast it initially, and then assuming the scattering AOE still clips the enemy you’ll probably want to boost the POW 7 hit on the enemy solo to ensure the kill.  Against units, most things that have high DEF also have very low ARM, so boosting won’t normally be necessary.  Some people will tell you to instead run the Lancer up close and Arcnode Arcane Bolt instead, but this can often end up costing just as much Focus.  1 to run the Lancer, 2 to cast Arcane Bolt, 1 to Boost the hit, and 1 to Boost the damage.

Arcane Bolt is a great little attack spell.  Whats not to love about a Cost 2, RNG 12, POW 11 attack spell.  It’s cheap enough that Stryker can potentially fire off 3 Arcane Bolts and fire his POW 10 gun for 4 ranged/magical attacks per turn.  This spell is often best used during an assassination run or as a way to pick off a model or two during a turn when you have nothing better to spend Focus on.  Just remember what I talked about above, using this spell against an important Solo can often mean you’ll need to spend 4 Focus to get the most out of it, and thats a hefty investment of resources.

Arcane Shield is the spell every other faction in the game wishes they had.  An upkeepable +3 ARM spell is awesome.  Many Cygnaran melee units only have average ARM stats, but stick Arcane Shield on them and suddenly those humble Sword Knights are now ARM 19 when in defensive line!  Thats some of the highest armor in the game for infantry, and it’s possible to attain on the cheapest of units!  ARM 19 means that even standard POW 12 shots will struggle to damage them, and as for AOE’s, just laugh them off!  Alternatively, you can stick Arcane Shield on Striker himself to pump him up to ARM 18.  If you’re expecting an assassination run in the following turn you can camp Focus to go even higher.  When you stack his Feat on top of that….well, we’ll get there…  One key is, cast this spell on turn 1 and then upkeep it.  It’s cheap enough to recast it at need, but try not to do that every turn.  For battlebox games I actually like this spell best on the Ironclad or on Stryker himself.  I see a lot of people cast it onto the Lancer, but I feel that an ARM 18 Lancer is durable enough to last until things get close, at which point the Arcnode isn’t as useful anymore, anyway.  An Ironclad, on the other hand is more likely to be mixing it up in melee, and melee attacks will do a lot more damage than ranged.  Those extra 3 points of ARM can mean the difference between a dead Ironclad and an angry one when your next turn rolls around.

Blur– This is another awesome spell: an upkeepable +3 DEF vs ranged and magic attacks..  This is one of those spells that gives Legion, Retribution, Cryx, and potentially Circle a really rough day.  Just as with Arcane Shield, stick this onto a model or unit that you know will be the focus of your opponents’ attention and watch the frustration build.  You’ll probably want to begin with this spell on a unit when facing Legion, Retribution, and Circle, since those factions will often start out by shooting your units before making a run against your Warcaster later in the game.  The speed of Cryx’s Bonejacks means that you should consider having this on Striker from turn 1 since even 1 free Bonejack can result in an assassination very quickly.  Even Deneghra doesn’t like dealing with DEF 19 versus her spells.

Earthquake is Stryker’s de-buff spell.  This spell makes assassination runs happen.  Let me sketch out one possible scenario.  The Lancer (or Striker himself, depending on the situation) moves up within 5″ of the enemy Warcaster.  An unboosted Earthquake is cast.  Since an AOE can never scatter more than 1/2 the distance between the casting point and the target, the AOE cannot go more than 2 1/2″, and that means a 5″ AOE is guaranteed to still hit the ‘Caster.  Striker now shoots his gun at the knocked down, DEF 5 Warcaster.  The rest of your army moves in for the kill.  A Charger with 2 boosted POW 12 shots will put the hurt on from range, or an Ironclad can simply walk in and take a couple auto-hitting swings with its hammer.  The result- a dead enemy Warcaster.

Here’s another scenario, lets say there’s an enemy unit in your face that you just don’t have the resources to deal with, Earthquake them, depriving them of the ability to charge in and attack.  If you see several bunched up enemy Warjacks, knock them down.  Yes, they can stand up in the maintenance phase by spending a Focus, but that’s perhaps 3 Focus that’s being spent to stand up and NOT to charge, attack, boost, etc.  Most Warcasters can afford to spend 1 Focus to stand up a knocked down model, but once you get to 2 or more, it’s a serious drain of resources.  In the meantime while they’re knocked down you’ve got low DEF targets for your solid ranged attacks.

Snipe is the last of Stryker’s spells, and it’s another doozy.  It’s an upkeepable spell that adds +4 RNG to ranged weapons.  This can give a Charger a RNG 16 gun, or a Defender a RNG 19 gun!  Ranged combat is one of Cygnar’s strengths as a faction, and this spell helps them make the most of it by giving 1 or more extra turns of shooting before the enemy can close.  As someone who plays against Cygnar regularly, I find I’m most scared of this spell when it’s cast onto a unit or a Warjack with multiple shots.  Yes, a 19″ ranged Defender is great, but it can only shoot once per turn and only at 1 target.  10 Longgunners standing still with this spell can shoot up to 20 times at 20 different targets.  One single-shot Warjack that does benefit greatly from this spell is a Hunter.  Hunters often get just 1 or 2 shots before being disabled or before things get into melee.  Being able to shoot enemy heavies for that one extra turn results in a dead Warjack.  Here’s a trick with this spell.  If you have 2 units you’d like to benefit from this spell- upkeep it on one of them during the maintenance phase, and activate that model/unit first.  Then, activate Stryker and have him re-cast the spell onto the other model/unit you’d like to assist and have them get the +4 RNG.  You can bounce the spell back and forth between two units like this each and every turn.

Advertisement
The Feat
Stryker’s feat gives himself and all friendly faction models within 12″ +5 ARM for 1 turn.  This Feat takes awhile to get the most out of, since you need to use it the turn before your opponent wants to make a big attack.  I can’t tell you when that will happen, since it’s entirely dependent upon terrain, deployment, army composition, scenario, etc.  One suggestion I have if you are unsure is to use it the turn before most of your opponents’ models will first be able to attack in melee.  That’s not always true, since a ranged-heavy opponent will probably try to stay out of melee, but it’s a good rule of thumb for most games.  This Feat can also be great when used on turns 2 or 3 of a scenario game when you want/need your models to be able to hold a point or area.

Thats Stryker.  He really is a great caster and I have found him one of the best Cygnaran casters for dealing with some of the more ‘unconventional’ factions like Legion and Circle.  Next up, the Warjacks in the battlebox along with some good basic tactics and synergies, as well as some nice ways to expand your army. 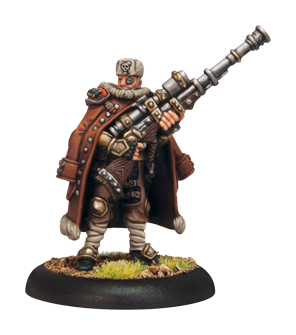