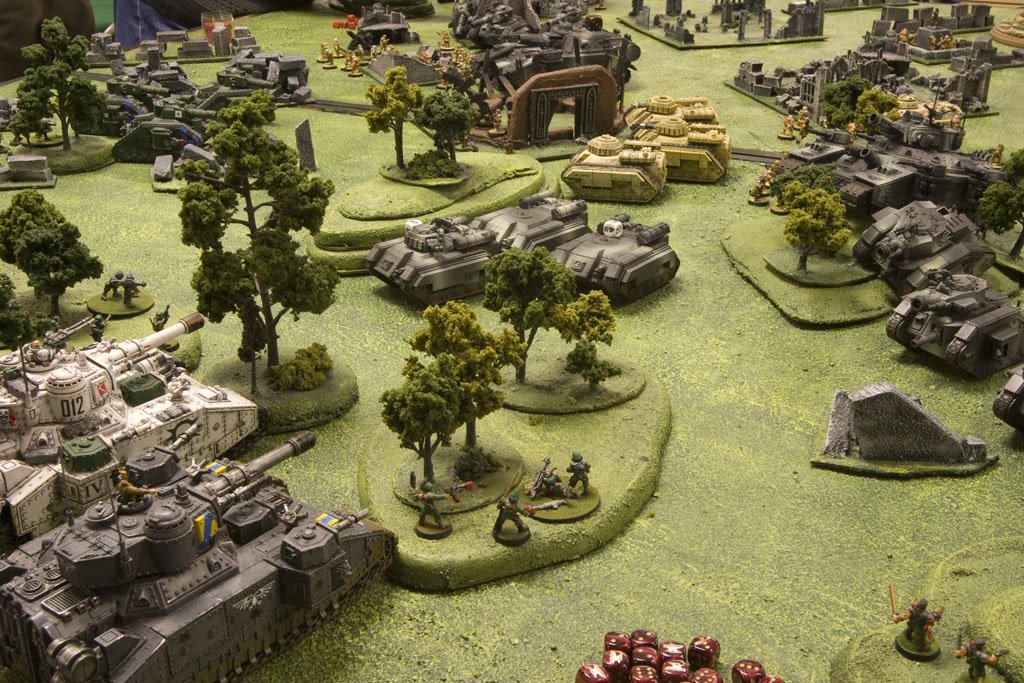 Jwolf here. As you know, Games Workshop released rules for Spearhead Formations, which are supposed to be add-ons to your normal 40K games. I’ve read through the formations, and I have some ideas about which units benefit the most from the Formations posted on the Games Workshop site. First I’ll briefly discuss the Spearhead Rule, then dive into formations.

The Spearhead Rule lets every non-walker vehicle in the unit fire an additional weapon, much as if they had Power of the Machine Spirit, if it is within 4” of another vehicle in the Spearhead. Note that this does not overwrite the Power of the Machine Spirit rules, so Space Marine vehicles with Power of the Machine Spirit will be firing TWO additional weapons. This means a shaken Land Raider Redeemer can move 12” and fire both Flamestorm Cannons at two different targets, as long as its pet Rhino follows along behind. This also allows regular tanks the ability to shoot their main guns even when stunned – a huge advantage to tanks, which already rule the wasteland. The Spearhead Rule, by itself, is worth buying a formation to get.

Armoured Spearhead – For 60 points, up to 3 tank units gain a 5++ save. As the Imperial Guard can take multiple tanks in a unit, this very quickly becomes cheaper than extra armour and a whole lot better. This formation most favors tanks that plan to be shooting on turn 1, as those blowing smoke or going flat out on turn 1 have generally better saves. A heavy Imperial Guard Russ line would be the perfect set of units to put this Spearhead on.

Ambush Spearhead – If you have terrain that will cover vehicle units, this gets silly very quickly. Put tanks in a fortified ruin and suddenly you have a Predator with a 2+ Cover save. The Infiltrate portion is very good for Blood Angels Librarian Dreadnoughts, Defilers, and other fast-moving assault-oriented walkers. Since transports cannot take this formation and the formation specifically prohibits being held in Reserve (and thus Outflanking), this is the least interesting formation for tanks, overall. Again the best beneficiary, tankwise, is the Imperial Guard, who can park Chimeras in front, buy Camo netting, and their gunline has a 2+ Cover save. Of course, the vulnerabilities of packing tanks together like that should be well known in most circles by now…

Mechanised Assault Spearhead – Up to three vehicle units, all arriving by outflank on turn 1 on the same board edge? The downside is that very few vehicle units exist, and most of those are Heavy Support choices. The upside is that your 3 Land Raiders are arriving in the opponent’s lines with their cargo intact, guaranteed. The cost of this ability is far outweighed by the benefits of not having to cross the board, if you’ve got a knife fighting assault army. I don’t see Eldar using this to get their Falcons into position, and the Blood Angels are already able to get across the board essentially unscathed, but for Chaos Space Marines in particular, this formation is very wonderful – not only does that Land Raider full of Berserkers start in enemy territory, but their Icon is in place to summon Lesser Daemons on turn 2.

Tank Hunter Spearhead – 3 Tank or Walker units with the +1 damage against vehicles? Warwalkers, IG Sentinels, and Mortis Dreadnoughts are in love with this formation. This also makes the Heavy Bolter sponsons of Leman Russ Battletanks able to harm AV12, radically increasing their firepower. The big winners are the Manticore and Eldar Lance-armed tanks, as the damage increase pushes them both into 4+ to penetrate Land Raiders, followed closely by Exorcists.

Archeotech Spearhead – +1 Strength for all shots from a tank or Walker unit, with a chance to harm themselves after firing. Since Warwalkers are all about delivering firepower and probably dying to return fire, this is a perfect upgrade for them.

Outrider Spearhead – This allows a Spearhead with two cheap tanks to defend a third expensive vehicle from damage. While the ability itself is pretty cool, the cost of the formation and the bodyguard is probably better spent on another vehicle or a different formation.

Skyfall Spearhead – This is the dreaded formation for those of you with three units of 3 Vendettas. Simply drop them in, mid board, and you get to shoot everything against side armor AND split fire, allowing you 18 twin-linked Lascannon shots at 6 different vehicle targets, all against side armor. Even 3 Vendettas are likely to demolish an entire line of Chimeras in one turn with this formation. My second choice would be 3 Dark Eldar Ravagers, which would get to lance vehicles and/or take pinning shots into enemy infantry. Also consider 3 Landspeeder units which now get to fire their Multimeltas at tanks and their other weapons wherever else makes it good sense for them. The Spearhead Rule makes this formation extremely deadly.

Monstrous Spearhead – Counter-Attack, Fleet, and Furious Charge are fantastic abilities, and almost counter the disadvantage of the Rage USR. Nevertheless, a Tyranid Monstrous Legion would have to jump for joy at the potential of this formation.

Crusher Spearhead – This turns fast tanks into missiles. Baal Predators will be almost bigger threats with their ramming than their excellent guns.

Seek & Destroy Spearhead – Once per game, move Flat out or Turbo-boost and shoot as if moving at Combat speed. Even at 50 points, the advantage that this gives to a cloud of Speeders is very nice. And being able to Turbo-boost Marine bikes up to Melta enemy tanks is pretty heinous.

Super-Heavy Spearhead – Allows a Super-Heavy into a normal game. The guy with the Warhound now wins. This formation should be very carefully considered before usage, as the potential for game balance disaster is extremely high.

A couple of closing thoughts:


First, I don’t plan to allow these for the 40K team or Grand Tournaments at BoLSCon.
Second, I’m sure I am missing some obvious killer choices for these formations, so let me in on your secrets. 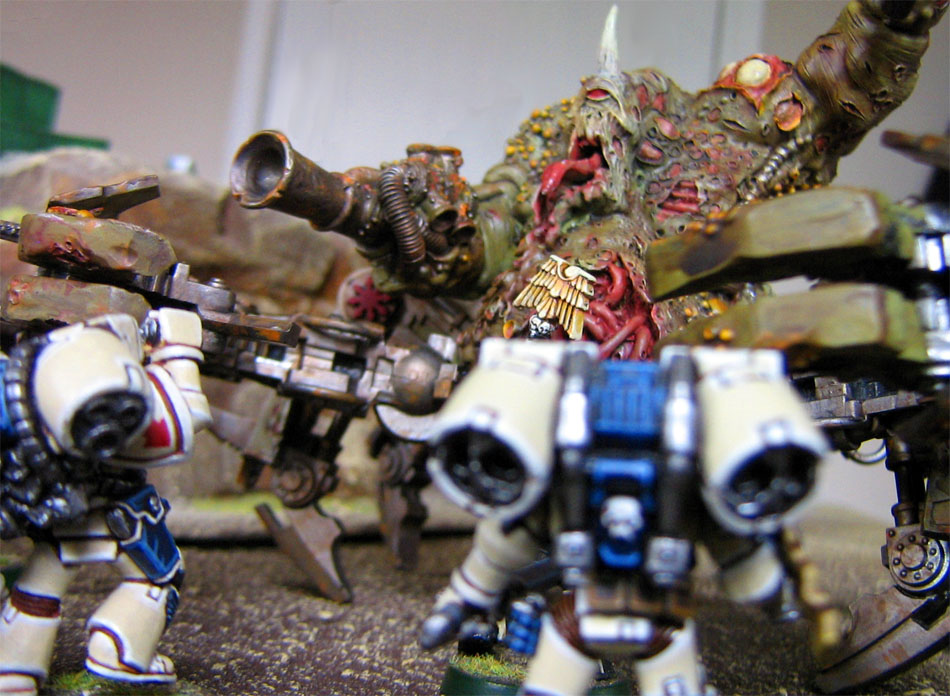