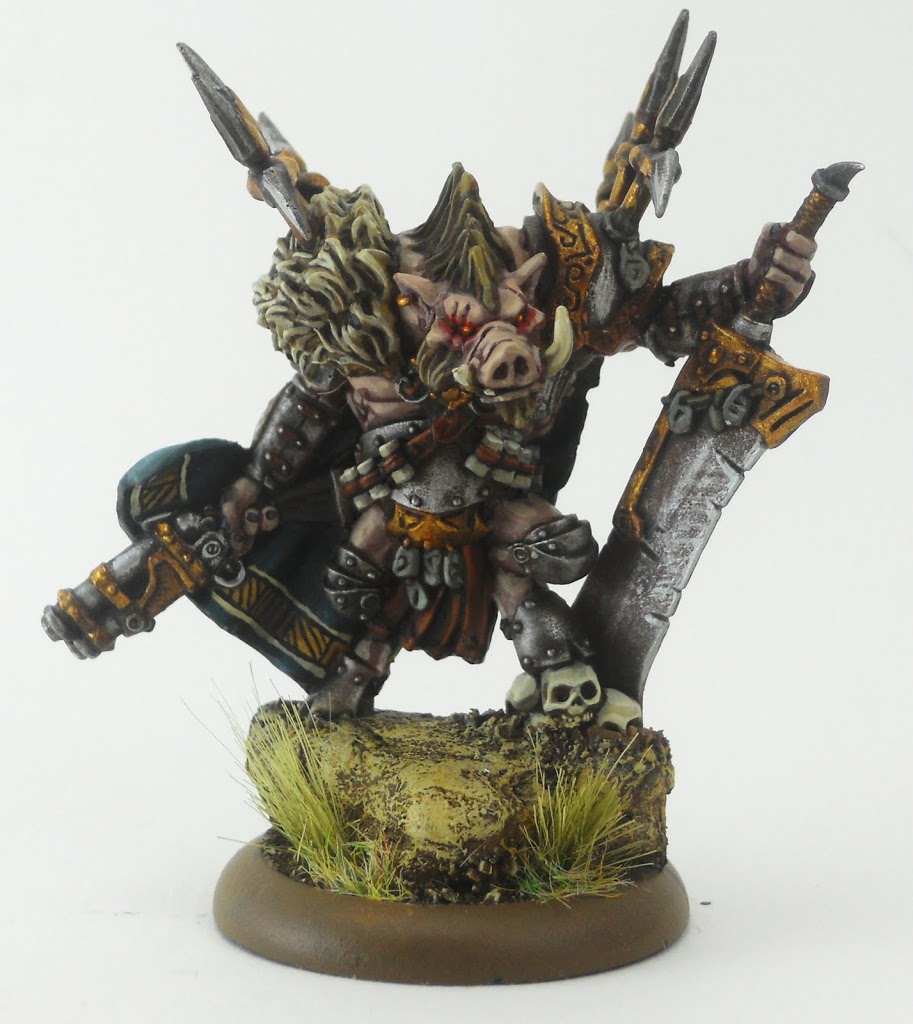 Having completed my recent Cryx projects I’ve finally had a chance to get around to a new one I’ve been looking forward to for awhile: my Minions Thornfall Alliance army.

I wanted something a little different for my Farrow and decided to maximize the skin tone area while giving it a sickly pallor. I thought this would give them a somewhat creepy feel, and make them a little more sinister than the studio scheme.

I started by mixing up a batch of off-tone skin colors. I made enough to last since these would be used for my whole army. The undercoat is tanned flesh mixed with a bit of Liche Purple. The next step is highlighted up with a bit of dwarf flesh. The next layer has some elf flesh added along with a bit of Graveyard Earth to keep it a little dingy. More Elf Flesh is added for the next layer with the final highlight being mixed with Bleached Bone to give it a somewhat sickly yellow feel. After finishing the metals, the first step was to give all the skin areas their flesh basecoat. Any areas that would be leather or fur started off with Scorched Brown. The skulls, teeth, cartridges (they still use silk cartridges in some parts of the IK), and fur… shoulederpad (?) were painted with desert yellow. The various stone talismans were painted Codex Gray. All of these areas were then given a wash of Devlan Mud. Finally the Cloak was painted black. Here I have highlighted the first two levels of the skin. I have begun with the red eye glow by painting the whole area of his eye sockets blood red. I wash the inner recess with Devlan mud to make the eye itself stand out. I begin highlighting the leather areas with Dark Flesh. The skulls, tusks, fur shoulder pad, and cartridges are picked out with Kommando Khaki. I also highlight the talismans up with more codex gray. The little bit of fur he has, on his head, back and mutton chops, is highlighted with a mix of Scorched Brown and Snakebite Leather. I make a wahs of Devlan mud, liche purple, and a little bit of water and apply it to some of the deeper recesses in the skin to make the shadows stand out more. I decided to go ahead and try highlighting my blacks up with Hawk Turquoise for this guy, and his cloak gets an initial highlight of the turquoise mixed with some black. At this point I add the next flesh highlight. The leathers are highlighted up with some Vermin Brown. Then I go back and use chainmail to pick out the rivets and buckles in some of the leather areas. The tusks, skulls, cartridges, and shoulderpad get a highlight of Bleached bone. Carver’s fur gets a final highlight of Desert Yellow. His eyes have been painted over with Blood Red again, followed by a spot of Blazing Orange. To try to enhance the look of the glow, A little bit of Blood Red is mixed with some of the flesh colors and thinly applied between the red areas and the flesh to blend them together. I add more highlights to the cloak with a mix of Chaos Black and more Hawk Turquoise.

Now for the last run of highlights. The final layer of flesh. Final highlights of Bleached Bone mixed with Skull White for the skulls, tusks, etc… The leather areas get just a tiny bit of Vermin Brown mixed with Vomit Brown. The cloak gets a layer of pure Hawk Turquoise, followed by a final highlight of turquoise mixed with Bleached Bone. At this point I have decided I really like the cloak having a rather vivid turquoise hue to it, but its just a bit too intense, so I tone it back by giving it a wash of the same ink I use on my metals: 1 part each of Devlan Mud, Badab Black, Asurmen Blue, and 2 parts water, with a few drops of Matte Medium to make sure it will still bind properly. Certain key areas of the stone talismans are picked out with rotting flesh to really make them stand out. I also go back over the metals and give them a few final highlights to make certain areas stand out better. His eyes get a final, very tiny dot of Golden Yellow. At this point I’m pretty sure I’m done with Carver, and finish off his basing and everything. But in the end I decide to do something a little special and give him a tribal pattern on his cloak. I started with a band of Graveyard Earth which I highlighted up a bit by mixing it with Bubonic Brown before giving it a final highlight of pure Bubonic Brown. I tighten it up with a border of Bleached Bone and Chaos Black Stripes. Then I section it off into rectangles of equal length. Before giving it alternating sections of diagonal and vertical stripes.

~And that’s my Lord Carver. Check back in a few when I hope to have some pictures of the War Hog conversion I’ve been working on. Comments are always appreciated.

Author: Ben Williams
Ben Willimans is a Professional Painter and Columnist at Bell of Lost Souls. He has been involved in the hobby and art side of miniatures and the tabletop gaming industry for over 20 years. He has won multiple national painting awards.
Advertisement
Minions Painting Warmachine-Hordes
Advertisement