Warmachine: Lore of the Iron Kingdoms- A Brief History of Warjacks 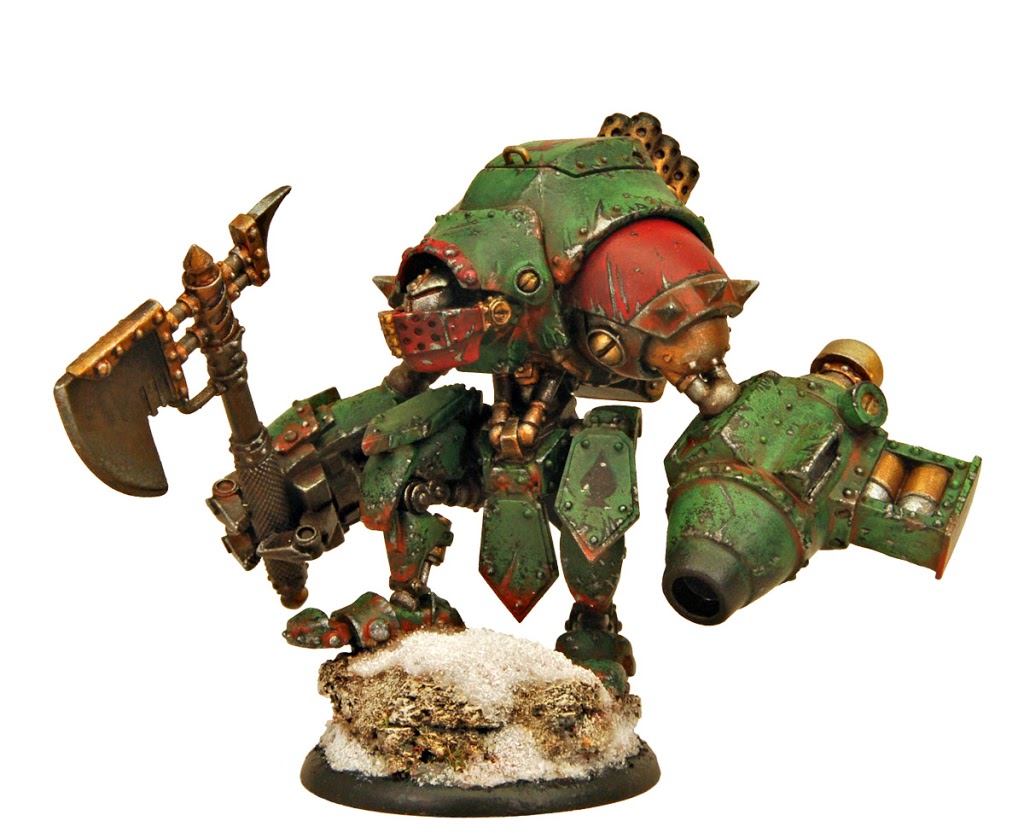 Warjacks are the iconic image of the Iron Kingdoms world.  But how much do you really know about them?
Warjacks were born during the Orgoth Occupation era.  In those dark times, the mighty Orgoth empire dominated the Immorese people, enslaving the land with a powerful military and dark sorceries.  The resistance groups needed every form of help they could get in order to combat the Orgoth.  They found that help in steam power and magic, aka “The Gift”.

Steam technology has existed even prior to the Orgoth occupation.  Early steamships were plying the rivers, and early steam warships were sailing the seas when the Orgoth fleet first appeared on the Western horizon, over 1200 years ago (743BR).  Unfortunately for the people of the Immoren, steam technology couldn’t compete with the raw power and potential of magic.  Orgoth blood sorcery turned those ships into so much kindling, and as the Orgoth conquered the land, they outlawed all construction and development of steam power, retarding development for hundreds of years.  It wasn’t until the first wizards appeared (137AR) and the first blending of magic with weapons technology (26AR) that the ingredients were right for the construction of Warjacks.  Even then, it took another 160 years before the first Colossal strode the land.

Colossals were giant amalgams of magic and technology.  Enormous steam powered constructs, requiring as many as six or seven wizards to control them, and standing perhaps 50-75 feet tall.  Along with alchemal firearms, the Colossals were the key that allowed the people of Immoren to drive the Orgoth back into the sea.  The small guard units created to protect the operating wizards on the battlefield became the nucleus of the modern battlegroup.

With the liberation of Immoren, and the now blended with magic, steam technology underwent a renaissance of technological growth.  What still held the development of “modern” steamjacks back was the need for a wizard to operate it.  That final hurdle was solved with the development of the cortex.  A cortex is akin to a magical brain, allowing users to instill a minor semblance of consciousness, and simple command functions.  This meant that simple labor jacks could be created which would have all the necessary commands for simple tasks already programmed into the cortex.  Wizards were no longer necessary to oversee basic operations.  On the battlefield, this meant the wizards could spend more time directly affecting the battlefield and augmenting the ‘Jack’s performance, and leave basic operations up to the pre-installed commands.  In fact, the cortex has become the single greatest hindrance to even greater use of steamjacks, since the cortices require very rare materials and complex magic to create.  Even today, Khador and Menoth both face shortages of battlefield-grade cortices.  This is one reason Khador has no light Warjacks.

Small, 10′-12′ steamjacks were finally created in 241AR.  To this day, they are used in mining, dock work, construction, and any field requiring major manual labor.  The addition of weapons resulted in the first modern Warjacks, which being smaller, were more mobile, more flexible, easier to construct and operate, and only required one wizard to fully oversee.  Though the weapons, armor, and cortices have improved, the basic design has remained the same for nearly 400 years.  Warjacks are used in every major conflict in the Iron Kingdoms.

If you want to know about any specific parts of the history and lore of the Iron Kingdoms, lets hear it. Knowledge is power! -Lux

40k Lore: Of Man and Machine