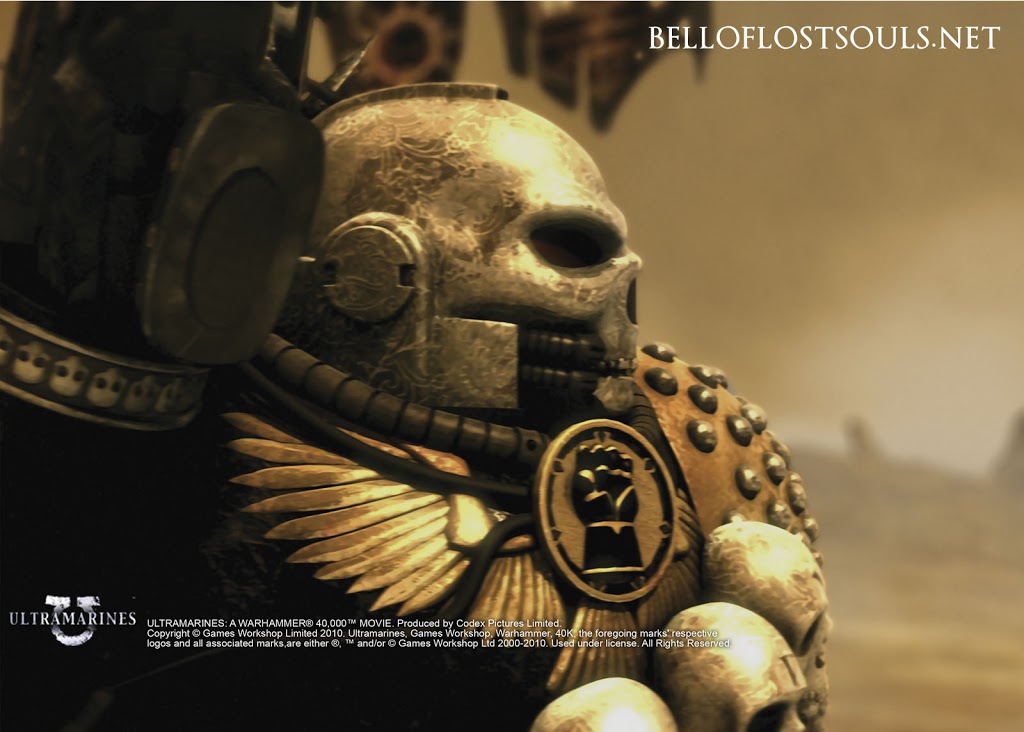 So, Spanky Harrison here again with another review, though this time it’s for something that runs a bit faster than a book!

Along with a half dozen other BoLS writers, I was given the opportunity to attend a private screening for the new “Ultramarines” movie by Codex Pictures. AdamHarry and I gave you our preliminary thoughts on it a few weeks ago, but now that the movie has been released, I wanted to take this chance to go into a bit more detail. The movie runs for about 70 minutes, and keeps pretty good pace throughout. I never really felt that things were being overly rushed or dragging on. The voice acting is also top notch. With talents like Terence Stamp as Captain Severus, who older fans might remember as General Zod from Superman 2, (and yes, he does tell people to kneel before something.) And John Hurt, who played host to the alien in the sci-fi classic, Alien, and more recently played Adam Sutler (the big bad chancellor) in V for Vendetta, provides the voice of Chaplain Carnak. Of course, since this is an animated movie, I have to take a minute to talk about the animation. If I had to sum it up in one phrase, I would say that it’s “good enough.” It’s not going to blow your mind or anything, but it’s good enough that it doesn’t distract you from the rest of the movie. There are a few parts that look a little weird, and a few parts that look awesome, but my primary impression was that the animation was about as good as it could be with the time and money available. So unless you’re really nitpicky about that kind of thing, don’t worry. It’s fine. The plot feels just about right for the length of the movie. It has enough twists and turns to be interesting, while not being so complicated that you feel like the movie should have been twice as long. The story starts with Captain Severus along with his buddy, Apothecary Pythol, and a single tactical squad (Heavy bolter and Flamer, if you’re interested) heading over to planet Mithron to answer a distress call. The first third or so of the movie introduces the characters and gives some background on the Ultramarines, as well as setting up some of the more interesting plot elements and character interactions for use later. After that, the Ultramarines are stomping around on Mithron for a bit, and there’s some action, but it’s still mostly character development and foreshadowing. Finally, in the latter half of the movie (though it’s not really all that far in) we get to the serious action! There are a number of cool action scenes with lots of shooting and blood and fire and stuff. All in all, pretty sweet. There’s also a part where the Apothecary harvests some gene-seed, which is a nice inclusion for long time 40k fans.

Speaking of which, this movie is definitely targeted at the long time fans. I’m not saying that people new to the setting will automatically hate it, but the more you know about Space Marines already, the more you are likely to take away from this movie. (There’s even a brief shot where I saw what might have been the black carapace, very nice attention to detail.) That being said, there is one part that does come from nowhere, and left me scratching my head fluff-wise, but I can’t really tell you about it without it being slightly spoilery (which will be coming in a later post).

Now, one thing that I was a little disappointed in was that they didn’t really focus on a lot of the things that I think are cool about Space Marines, namely their incredible strength, power, and durability. They do a great job of illustrating how quick and agile they are, but don’t really manage to communicate their size or strength all that well. That being said neither does any of the other various animated depictions of Space Marines. (The DoW trailers/cut scenes mainly.) So I can’t really say that it was a problem with Ultramarines specifically. Their depiction of the Bolter is a step in the right direction though. I think this also may be due (at least in part) to budget and time limitations as well.

The movie is currently being sold  in the USA in the “Collector’s Edition” DVD set which is going for $39.98. It comes in a snazzy steel case, and includes a bonus features disk and a 32 page hardcover comic book. There is no “normal version” as of yet, but I have been told that they are planning to release one in stores “eventually.”

Overall, I think that Ultramarines was a good first effort. It isn’t perfect, but it’s not an Uwe Boll film either. The animation looks good for what the animators had to work with, and I feel like they could really make something stellar if given the chance. I enjoyed the film, and I look forward to Codex Pictures future work. The steel-case “special edition” DVD set is pretty cool too.

~I would give this a solid 4/5. I might be giving it a bit of slack since it’s the first one of its kind, but honestly, I want to see more of this.