40K Deep Thought: The Place of the Sororitas Lets talk shop.  Grey Knights are out, and have redefined a place for themselves in the Imperial org-chart.  But how do we keep the Sororitas Codex just as unique?

It was so easy back in old days.  We had the Daemonhunters which included the Greyknights and their associated Ordo Malleus Inquisitors.  Then we had the Witchhunters and their Sororitas and Ordo Hereticus Inquisitors.

Then the Daemonhunters became the Grey Knights codex and now incorporates all the Inquisition’s 3 Ordos.  We now have the game’s first case of a single individual with two different set of rules – Karamazov who appears in both the Grey Knights and Witchhunters codices at this time.


So my question to you guys is what should the new Sororita’s book cover?

On the one hand, following the old codex model, it could be called the “Sisters of Battle” codex and basically look like the Grey Knights book, but with all the Sororitas models replacing the GKs and the Inquisition options being identical.

A second approach would be to leave the Inquisition to the Grey Knights and make the Sister’s codex in reality the Ecclesiarchy codex, surrounding the Sororitas not with Inquisitors, assassins, and such but with things like Cardinals, Priests, Deacons, Frateris Militia (who remembers then?) and the like.

I’m personally in favor of the second option as I hate duplication across codices and think an organization as important to the fluff as the Ecclesiarchy deserves its own army book.  It might also set a precedent for other future codices that cover other critical Imperial organizations…. (that say own Forgeworlds purely for example…)

~What’s your take, and what do you think the Sisters codex should focus on from an Imperial Institution point of view? What kinds of units do you want to see alongside the Sisters?

Author: Larry Vela
Dad, Gamer, Publisher, Pilot, Texan. All games all the time since junior-high. I started BoLS Interactive in 2006. I’m a lifelong tabletop & RPG gaming enthusiast, and internet publisher working to entertain and inform my readers every day. I've been playing RPGs and Tabletop Games since the 1970s. I'm been playing and covering Warhammer and Warhammer 40K for over 35 years.
Advertisement
Editorials Warhammer 40k Witch Hunters
Advertisement

Goatboy - Back with the Lists - CSM Superfriends! 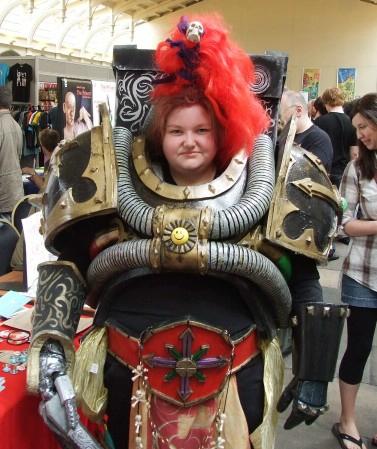