Warmachine: Put some Minion in your Mercenary! 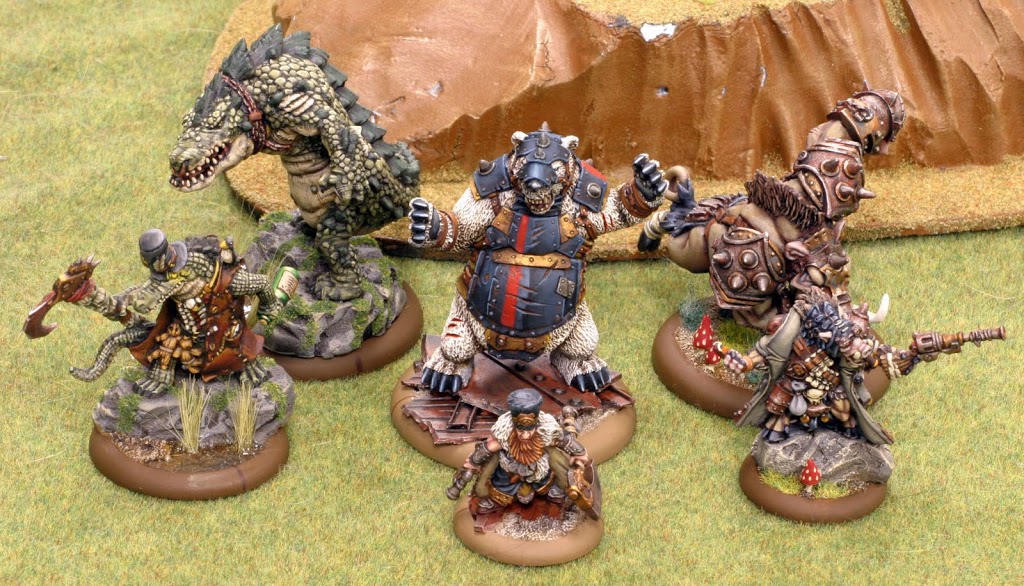 Other than a couple of quick games with Drake McBain when he appeared, my Mercenary army has remained largely unplayed since the release of MkII. This is a shame really, since not only did Mercenaries probably get some of the most improved rules out of all the factions, they also got some cool new toys.

Although perhaps “new” isn’t the most accurate descriptor since the pieces I’m going to be discussing have been around for several years now. It’s just that until the Hordes MkII field test, only Searforge had access to a Minion Warlock. Now Highborn and Four Star players can have fun with them, too. Minion Warlocks can be daunting to play, as you are staking a lot of points on the survival of some relatively squishy solos, but the rewards they offer make them worth considering with any Mercenary warcaster.

The most important thing they bring along is extra resources. Mercenary warcasters are always starved for focus. Every other Warmachine faction has some way to get more focus than the value printed on their Warcaster’s card. Cygnar has the squire and Journeyman, Retribution have their Arcanists, Cryx and Protectorate have too many avenues to waste my time listing, and Khador has access to some great efficiency spells as well as the Greylord Koldun just in case they need him. Mercenaries have a couple of decent efficiency spells, and some great Jack Marshals, but that’s just not the same as being able to cast your best spells, and have a heavy left over to go all out and beat something senseless. That’s where the Minion Warlocks come in. With their beasts generating their own fury, your mercenary army can gain the relative equivalent of up to 7 or 8 extra focus per turn.

Mercenary armies also have a lot to offer them. With a vast array of fantastic special abilities, Mercenary armies can get them moving faster and hitting harder. Of particular note are Mercenaries’ now stellar debuffing abilities. With the new Ragman character solo and the already popular Aiyanna and Holt, it’s fairly simple to net what amounts to a +4 to damage boost to the sometimes relatively pillow-fisted Minion Warbeasts. And with Epic Magnus and Gorten, if you play your cards just right you can work it out to a whopping plus 8.

As I’ve already mentioned they are very fragile. Keeping your Lesser alive is a full time job. Wrong Eye should always have submerge cast on himself unless you feel extremely confident about his safety and need the Fury elsewhere. Brun should always be base to base with Lug so as to use Lifebond, and he should always cast StoneHold on himself. Between these two abilities, Brun is definitely the most durable of the Minion Lesser Warlocks. Rorsch on the other hand, can be the most difficult to keep alive. Unless you think you have a chance to use his infamous Diversionary Tactics Brine alpha strike ability, you may be best off just walking him and using Dig In. Its very tempting to try using his Dynomite, or Lever Action Pig Iron instead, but think very hard before risking it.

No matter which Lesser Warlock you are using, don’t be discouraged if they get killed their first few times out. No amount of advice can substitute for practical experience, and you should never expect your brilliant Warmachine plans to succeed perfectly the first time you try them out. You must also be aware of the incredibly short leash your warbeasts are on when using Lesser Warlocks. Its very easy to charge your beasts out of the tiny control area they need to stay in if you are going to want to force them. Working only for the Searforge Comission, these two bring some great abilities to a contract desperate for more options. Without going into warcaster specifics, these two already offer the Rhulics something huge: Pathfinder. Other than Gudrun the Wanderer, these are the only two Commission models that can move freely through difficult terrain. In addition, Lug has two open fists, and the Chain Attack Grab and Smash ability. The significance of those two things together is that it means Brun can charge and perform a two handed throw in the same activation. The two handed throw is often unjustifiably scoffed at these days by people who cite the MkII added shake ability as rendering it ineffective. However, anyone who’s seen one of their own heavies tossed out of a scoring zone during a tournament knows that the ability has merit.

Gorten Grunback can probably make best use of the pair, given his low focus score of 5. People are often tempted to eschew Brun and Lug in favor of a second Driller, since the staple Rhulic heavy is a full 3 points cheaper, and considerably more durable. With access to Thor Steinhammer, a Searforge player can also use Tune Up to boost all of the Driller’s attack or Damage rolls. But with Lug generating his own resources he always comes out as the best choice for me. Since he can buy his own attacks he frees up Gorten to upkeep solid ground, Rock Wall, and Strength of Granite, and still have 2 focus left to put on his first driller. And with the flank ability, Lug will be an effective Mat 7, and end up netting about the same damage as a tuned up driller, if you are willing to force him up to full.

Gorten offers Brun and Lug a lot as well. His feat makes up for the pair’s biggest deficit: Spd 5 with no access to buffs. Durgen Madhammer doesn’t synergize quite as well with the duo, but can still take advantage of the lessened focus burden they provide. Without having to worry about paying focus for a heavy hitter, he has that much more to spend casting inhospitable ground, boosting the Blast Damage rolls for one of his his Avalanchers or his own amazing gun. They will only work for Four Star Syndicate, but since that includes every Merc caster but Ashlynn and Shae, you’ve still got a lot of options. The two are rather sturdy to begin with, and on top of that can use the Submerge animus in themselves to prevent them from being targeted by ranged or magic attacks. They also have the highest base P+S meaning they’ll work great even if you only take one of the popular aforementioned merc debuffers. Their somewhat low speed is offset by Snapjaw’s ability to charge a living model at Spd +2; for free if its a living warrior model. And keep in mind that is “living warrior model” not “enemy living model.”

Remember, the Four Star contract represents a bunch of vicious gangsters and thugs, so if you’re playing that contract, its perfectly in character to run a lone steelhead out to just the right spot to give that giant alligator the extra threat range. Finally, Wrong Eye can bring along other gator warbeasts. While the Blackhide Wrassler or Ironhide Spitter are usually going to be too costly to consider, the 3 point Snapper with his Spiny Growth animus is definitely worth thinking about. And yes when Wrong Eye casts it, you can put it on friendly Merc models.

I’ve been having fun taking these cold-blooded killers with Magnus the Warlord and stacking Calamity with Aiyana’s harm ability to get Snapjaw hitting at P+S 21. With four fury to burn through, this will spell death for just about anything. Then using Mag’s Kill Box feat will usually keep the beast safe to strike again next turn. With Gorten they make a great flanking piece since Snapjaw gets extra threat on living models. This makes him great for getting in there after a Landslide and taking care of an enemy caster or ‘lock. With Drake McBain you get the chance to send Wrong Eye into combat with no risk, since everyone’s favorite action hero’s feat can keep a warrior model alive for a round. And with 4 fury of his own with a Pow 13 attack, Wrong Eye is fairly devastating in melee. Drake’s Fortune spell is also very effective on models that can buy lots of extra attacks. Fiona the Black loves to have as much focus as she can get to fling spells, and these two will take away some of the burden of her having to run Warjacks. And since the pair can use the Submerge animus to make themselves almost immune to enemy shooting, they offer great survivability with the Thamarite, since she has only one very situational defensive buff spell. Both can go along with either of the big Merc contracts happily fighting for Highborn and Four Star Syndicate. These two can be used in most of the same roles as Wrong Eye and Snapjaw, though they are much faster while a lot more squishy. Consider taking Gorman along since not only can he help the damage output on Brine, but his smoke cloud can also help keep Rorsch alive. Also, Rorsch can take advantage of the Highborn ability allowing solos to advance deploy. It’s expensive and risky, but Rorsh too can bring along extra warbeasts. Adding a War Hog or Gun Boar to his limited battlegroup isn’t a particularly attractive option since Rorsh has only three fury, and the beasts animi aren’t typically as helpful as those of the Gatormen warbeasts. Finally, just like Lug, Brine has two open fists with which to perform two handed throw power attacks.

These two are probably the better choice for a Gorten Landslide assassination run since Brine can charge something up to 13″ away, and doesn’t even necessarily have to do this in a straight line. And while while we’re on the subject of Dwarves, Rorsh’s dynamite is a nice big 4″ AoE to use on Durgen’s feat turn. I also like them a lot with Ashlynn for one particular reason. Her Gallows spell often seems irritatingly useless, since you will typically spend 3 or 4 to cast it leaving her having to choose between upkeeping/casting other spells, or loading up a heavy to dispatch whatever she drags towards her. With Rorsch and Brine, she can use Gallows on a heavy, confident that with the aid of Ragman and/or Aiyana and Holt, Brine can finish it off for her. And she’ll still have enough focus left to upkeep Quicken and camp some to help keep herself safe. Her feat also nearly guarantees the big hog will get Critical Knockdown on his Gore attack, which is something my Brine typically never seems to want to do even though I boost it every single time.

~So did I just blow anyone’s mind or have all you merc players been using these tricks already? Honestly there’s so much you can do with Minion Warlocks, I was sorely tempted to turn this article into a three-parter. So if I omitted anything that’s too important to be left out, I want to hear about it in the comments!

Author: Ben Williams
Ben Willimans is a Professional Painter and Columnist at Bell of Lost Souls. He has been involved in the hobby and art side of miniatures and the tabletop gaming industry for over 20 years. He has won multiple national painting awards.
Advertisement
Tactics Warmachine-Hordes
Advertisement