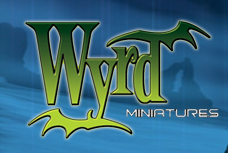 Hello everyone, today I’d like to share with you a new game that I’ve recently become addicted to. This game is called Malifaux. I’ve been playing it for a few months now, and feel that I’m ready to give an opinion on it.

Malifaux is a skirmish game that is completely driven by its unique and vastly diversified characters. Set in an alien world, Malifaux is the home of dark magic, terrible monsters, crime and poverty, and the oppressive hand of tyranny. With an excellent array of beautiful miniatures and a low cost one could easily find themselves with a few fully painted crews in a short amount of time.
The Company:

Malifaux is the brainchild of Wyrd Miniatures, a company that began producing just miniature models in 2005. In 2009, the first game for these miniatures was published; this game was, of course, Malifaux.

The game is set in the 1700’s. The story began on a magically dependent Earth. One day a portal opened up to another world, this portal would later be known as the Breach. The brightest and best minds of Earth started out on an expedition through the Breach and found themselves emerging in another world. Malifaux, as the world would be called, was not entirely unlike Earth. But, where Earth was a thriving population of life, Malifaux was a wasteland. The scattered remains of another civilization were the only evidence of any life having ever existed.

Not long after they entered the Breach the explorers felt magic in the atmosphere, like a radiating flux of power. As interesting as the new world was, what really gave rise to its value were the magically imbued rocks the explorers found. These stones contained vast magical reservoirs, and could facilitate and enhance the magic man so desperately needed. Soon, the stones were being mined and shipped back to earth.
A constant supply of stones is always required for the stones don’t last forever. After a time, they become depleted and must be replaced or recharged. They eventually earned the name “Soul Stones” for the unique way they can be replenished. If present at the moment a person dies, the stone regains a margin of its power, leading to some very controversial and existential questions.
One day the Breach began to close. Slowly shrinking until it finally disappeared. The last known event to occur on Malifaux was that of some major conflict or battle just prior to the Breach’s close.
A century later the portal opened back up. But this time the brightest and the best minds were too afraid to go. Military and indentured or enslaved workers were sent over and found the remains of a battle but not of the people left behind a century ago. The explorers wasted no time in reclaiming the world and reestablishing their mines.
The Factions:
The world of Malifaux is divided by its large number of opposing factions, each with their own agendas. The first faction is the Guild. The Guild is the oppressive fascist body that controls the flow of Soul Stones. They are the police and government that controls the city that most of the people live in.

The Arcanists are the next group. They are the direct enemy of the Guild. These men and women form labor unions and believe in the equal distribution of Soul Stones. Taking the side of the worker, the Arcanists are very popular among the people, whom most already have a solid foundation of hate for the Guild. This rebellious group hides in the populous and has many faces, making it hard for the Guild to target. But, underneath the disguise of a peoples’ army, there is the unmistakable face of a crime syndicate.

The Resurrectionists are the people of Malifaux obsessed with power to the point that they have no limits to how they will achieve it. Fascinated by death, the resurrectionists use their dark knowledge to create armies of the living dead to fight their battles.
The Neverborn are the original denizens of Malifaux. They are what remain of the long distant races. They take many forms and fight for various reasons. But, they share one thing in common: a hatred for the intruders from Earth. It is the ultimate goal of these monsters to scour their world of humanity.
The Outcasts. These are the people who do not belong to any of the other factions. Their goals and motivations are uniquely personal. Some of them may have ties to other factions, but ultimately they do not belong to any of them.
The Mechanics:

Malifaux is a unique game with simple rules, but vastly complex strategies. Each crew has a unique play style with nicely contrasting strengths and weaknesses. The simplest way to think about the game is to compare it to chess. Each model has a unique role, and it’s the overall synergy of the crew that makes them effective. Also like chess, players take turns playing one piece at a time. Rather than the approach many other miniature games take, which involves one player playing all his models at once, Malifaux’s design allows one person to activate one model and perform all their actions at that time.

While there is no order to the actions a model can perform, such as when to attack or when to walk, they do have a limited number of actions they can perform. Each model is given Action Points, or AP. Every action has a point cost that you must spend to perform that actions. There are also special kinds of AP that can only be used for certain actions. Such as, a model with melee expert would gain an addition AP that can only be used to make an attack action.
One of my favorite features of Malifaux is that it is heavily objective based. In fact, the objectives are so important that you can still win the game even if you are tabled by your opponent. And each of the different types of missions is special and unique. It is not simply a game of, “go stand by that meaningless object until the end of the game.” Some objectives will have you disarming bombs, or planting evidence somewhere, or guarding a supply wagon as it moves up the board. And, each crew has unique abilities to help aid in certain objectives.

Each faction has different crews within it. At the start of the game, players choose which faction they will to play. Then the objectives for each player are discovered, you and your opponent can have different objectives, then you may select special side missions if you choose. Then finally you select your crew. Deciding what crew to bring to complete your mission is all part of the strategy. Some crews make some missions more challenging while others easier.

The most unique feature about Malifaux is that it doesn’t use dice. You heard it, no dice in this game. Instead the game uses cards. Just like a regular deck of playing cards, each card has a value and a suit. When making an attack you would flip a card and add its value to the model’s attack value. Then your opponent would flip a card and add it to his defense. The higher total wins, this is called a duel. This the same system used for most other events in the game.

The really fun part is that you can cheat your results. Each player has a control hand of six to seven cards. Once during your duel each player may choose to replace his flipped card for one in his hand, thus increasing or decreasing his total. Another thing that can matter is the suit. Some models may have abilities are triggers that not only require certain value but a required suit as well. It may sound complicated but it’s actually very easy to get the hang of.
There is another way to cheat or “twist fate” and that is the Soul Stone. A crew is consisted of Masters and Minions. Each Master gets a certain number of Souls Stones that they can bring to the fight. These Soul Stones are used to cheat in a similar manner to the control cards. The difference being that only Masters can use Soul Stones and instead of replacing the card and suit you drew they allow you to add a new card value and suit to them.
The Models:

The Malifaux models are exquisite. Each is unique and very well detailed and most are extremely easy to assemble. Many models come as whole pieces. The entire line is metal, which isn’t a bad thing since the models are so cheap and rarely require complex construction. Perhaps one of the biggest factors for me to start playing was the cost. Malifaux is a small game and only takes one to two hours to play. An average size game has anywhere from five to ten models, excluding some hoard crews who can reach up to twenty models if the player chooses. Models come separately or you can purchase a whole crew in a starter box. Unlike Games Workshop starter boxes, the models in a Wyrd starter box are enough to actually play the game, and play it well. Such as, in the Friekorps box, which is only about $40, you get six models and instantly have enough models to play a medium size game. It also comes with all the models that crew needs to win! You don’t have to buy the starter box then go out and buy the “good” models, too. Also as an added bonus, each model comes with a player card. These cards contain all the model’s stats and abilities, similar to Warmachine.

Malifaux is an insanely fun game. If you’re looking for a fun break from whatever game you’re currently playing, or want something new to paint, Malifaux might be your game. It’s cheap enough to try and, if you like it, it’s cheap enough to play multiple crews and factions. It is hard to get bored with this game.


Have you played Malifaux, or are you thinking about playing? What are your opinions of the game?