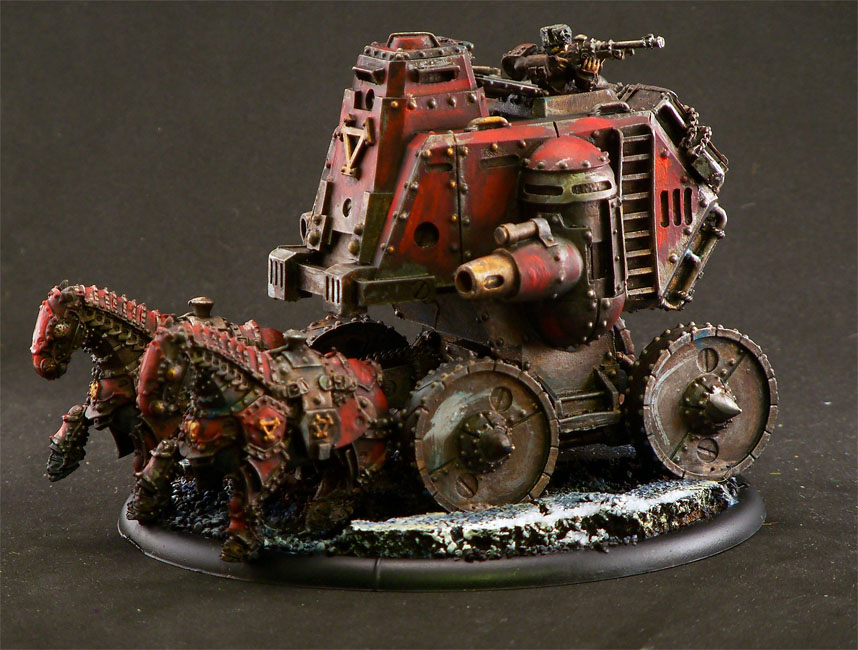 Goatboy here with a model review. I got lucky enough to get a hold of BigRed’s Khador Battle Engine. Boy is this a big kit for Warmachine.

I judge models based on Value, Look/Form, and Paintability. Pretty simple and easy as I want my models to look good and still be fun and enjoyable to paint and build. This is a pretty pricey kit for Privateer Press. I know you usually only use one so it isn’t nearly as wallet draining as some of the common 40k purchases you see (6+ razorbacks, 2 + Storm Ravens, 9+ Chimeras, 3+ Battle Wagons, etc) it is still a steep price. The common practice for Privateer is to give you everything in the box and you get everything you need. Also the base is rather neat with ridges to define the model’s arcs and a large enough space to create a dynamic bit of foam, rocks, and cork – almost like a diorama base.

This model looks good. There is a ton of detail in the sculpt from the bags on its back as well as all the tiny rivets and other mechanical pieces on the model. The guy shooting out the top looks great too and the horses, while a static pose, are designed well enough to hide their build lines as well. The model came together rather easily with the only thing I didn’t like about it was the different type of plastic they used for the bottom strut. The main bulk is a hard resin you commonly see for their plastics. They didn’t have the greasy feel they sometimes have. The bottom strut was a different form that was both bendy and had some give to it. I think the idea was to give you some flex and some “suspension” on the model as this strut piece connects the wheels, horses, and main carriage of the model together.

This is a big kit and so it has some issues when you paint it. It’s parts are of variable weight (metal and resin) so I ended up having everything attached beforehand in order to paint the full monster. This left some areas which were hard to get at. I was lucky enough with the style I have done for Big Red’s Khador army that a bit of dirt and grime is ok on the model. The interesting thing is that the flat areas are not a huge flat part of the model. This lets you have some fun with shading and lets you have some space to do some battle damage. The model is a hybrid kit but the metal pieces are small enough or have enough area to allow them to be glued onto the other parts easily enough.

Overall I liked the model. It is a neat foray into the realm of bigger kits for Privateer Press and I look forward to hopefully getting a hold of the Cryx battle engine in the coming months. The only thing that drove me nutty is the same thing I see in a lot of Privateer Press kits – the need to separate the shoulder pads on a model without shoulder pad options. Just mold it on so I don’t lose the teensy bit in the tornado that is my office. I didn’t lose this one thank goodness but I have lost tiny shields and shoulder pads before.

If you play Warmachine I am sure you are getting one or two of these bad boys so post your thoughts when dealing with it.The one I got was in perfect condition and had no real “difficult” build challenges at all as most things were either just two pieces (Horses) or just a simple case of glue it and spray some activator.

Goatboy out! A tactics article is coming later on, but that’s not me…

Author: Thomas / Goatboy
Thomas Reidy, aka Goatboy, the ever-evil member of BoLS. I do arts, play 40k, and even paint a lot of stuff. I have been playing Warhammer 40K since the 1990s, and have won multiple national events including Adepticon and GW GTs. I've been writing for BoLS for 15 years. Look at my Instagram to see what I am working on - or working on for someone. I am always doing something hobby related.
Advertisement
Khador Miniatures Review Warmachine-Hordes
Advertisement 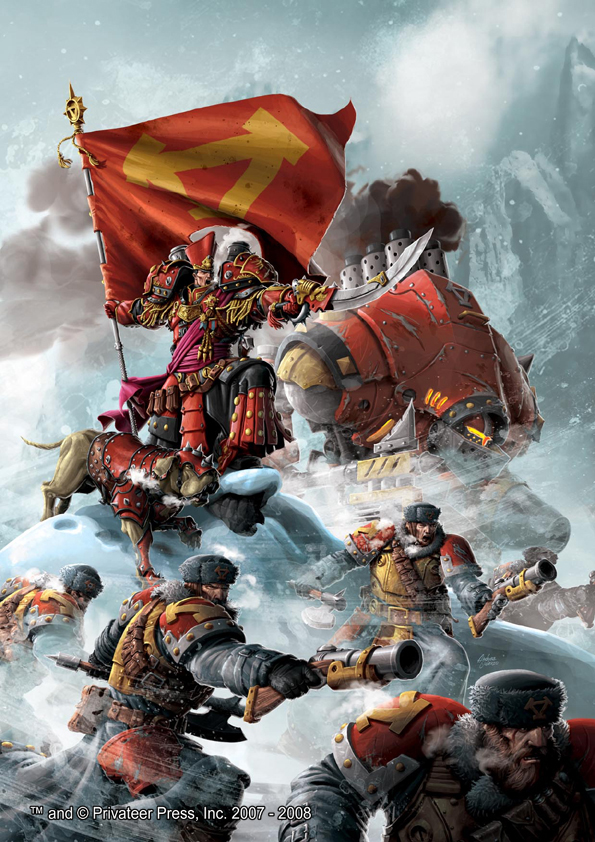