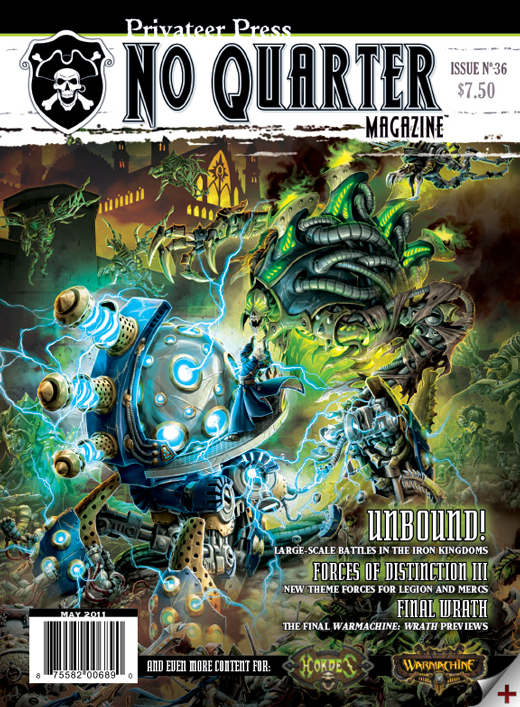 No Quarter #36 dropped on us last week and brought us new rules for a few models.  We have preview rules for four new releases: the Wraith Engine, Captain Damiano, the Arcantrik Force Generator, and the Farrow Slaughterhousers.  Let’s dive right in! The Wraith Engine, Cryx’s Battle Engine, seems pretty impressive for its 9-point investment.  Its stat block is fairly decent, and it boasts a pretty nice damage profile with its paired P+S 15 Scything Blades, Dark Shroud, and the ability to spend souls like focus via the Soul Collector rule.  With Reach and its huge base, a single Wraith Engine can wipe out entire swathes of infantry by purchasing more attacks with Soul Collector.

Defensively, the Wraith Engine brings a couple of interesting things to the table.  Wraith Walker allows the Wraith Engine to be Incorporeal every other turn (see Epic Deneghra), giving the Wraith Engine protection from all non-magical weapon and non-spell attacks.  Its other interesting ability is Unhallowed, which grants +2 ARM and immunity to blast damage to other Incorporeal models in its command range.  This is a nice little boost for things like Pistol Wraiths and Blackbane’s Ghost Raiders.  While the Wraith Engine doesn’t grant the Unhallowed bonus to itself, it can grant it to other Wraith Engines, which raises the point that its Field Allowance value is 2.  In terms of mobility and threat range, SPD 6 stacked with Reach and Apparition gives the Wraith Engine an 13″ threat when charging and the ability to jump out of melee at the beginning of your turn.  Not to mention that all battle engines automatically get Pathfinder as well!  While the Incorporeal rule does allow it to move through other models, getting that DVD-sized base all the way through an intervening base will often not be possible.

Warcaster synergies seem plentiful.  With ARM debuffs and STR buffs aplenty, you’ll often never have trouble cranking up the Wraith Engine’s damage output.  Accuracy buffs will often be a little harder to find, but Skarre and Deneghra provide nicely via Dark Guidance and Crippling Grasp respectively.  Feat-wise, there’s a lot to love.  The scariest is potentially Epic Skarre’s Fate Weaver, which can make a Wraith Engine all-but-immune to damage for a round.  Wraith Walker one turn, Fate Weaver the next, then Wraith Walker again.  Gross. Warcaster Captain Damiano is a reason for Mercenary players to rejoice.  While his stats and personal damage profile aren’t particularly impressive, its his spell list and Paymaster ability that make Damiano shine.  The Paymaster ability, most notably found on Joln Rockbottom, grants Damiano the ability to hand out two different buffs to Steelheads in his army: Money Shot and Battle Maneuvers.  Money Shot is a simple +2/+2 to attack and damage rolls on ranged attacks.  This is fantastic on Steelhead Rifleman, who can now fire with single Rat 7, POW 13 attacks or paired RAT 9, POW 15 Combined Ranged Attacks with re-rolls on the attack roll via Combined Arms.  This also applies to Steelhead Heavy Cavalry and their Blunderbusses, which can now fire with an effective RAT 7, POW 14, giving their Assault order a little more teeth.  Battle Maneuvers grants Reform to the targeted unit, allowing them to move 3″ at the end of their action.  This is a great little buff for any of the three Steelhead units, letting Steelhead Halberdiers or Cavalry reposition after a charge to move up and engage the next rank, or allowing the Rifleman the ability to scoot back a little bit after laying down a fusillade.  Be mindful that Damiano can only hand these buffs out a total of five times a game.

Damiano’s feat isn’t particularly mind-blowing, but it ain’t bad either.  A combined +3/+3 on STR and ARM for a turn gives the ability to hit hard and weather the retribution.  It’s hard not to find a Mercenary melee unit that won’t like that.  Kayazi Assassins at an effective MAT 8, P+S 15 with Gang?  A P+S 20 Mangler with ARM 22?  Yes, please!

Damiano’s spell list is described as being an “army support ‘greatest hits’ album”, and I couldn’t agree more.  Deadeye is among one of the best ranged support spells in the game, injecting some serious steam into units like Croe’s Cutthroats, the Nyss Hunters, and Boomhowler and Co.  When running in the Highborn Covenant, Gun Mages will certainly appreciate the increase in critical hit probability.  Death March’s +2 MAT and Vengeance is likewise fantastic for your melee complement, and will make a great boost to impacting Steelhead Heavy Cavalry, Kayazi Assassins, and, you guessed it, Steelhead Halberdiers, who will now harken back to the days of MkI and Forefend.  Sure Foot grants knockdown immunity and a DEF increase in a small bubble, creating a nice bump for Tough models or things already benefiting from decent DEF stats like Kayazi, Halberdiers, or Nyss Hunters.  It can also allow you to get Damiano into that scary-warcaster-DEF-area of 17.  Warpath allows you to get some extra, out-of-activation movement for your warjacks.  This can give your Nomads and Manglers a threat range of up to 13″ on the charge, allow you to reposition before a slam, or grant a short move for a Mule so that it can still benefit from Steam Pressure and the aiming bonus.  While Convection isn’t much to write home about, it’s certainly a pretty decent 2-focus damage spell.  While abilities like it are often 5-percenters, you’re always glad when you have it, and the extra focus gained on a warjack for killing your target certainly doesn’t hurt either. While the Arcantrik Force Generator was spoiled just a few days after No Quarter #35 was released, it hasn’t been discussed here.  At 10 points, it’s the most expensive of the previewed Battle Engines, but it comes with some interesting abilities.  Stat-wise, it’s markedly slower than the Battle Engines, but where the others are often meant to be closer to the front line, the AFG wants to keep its distance, so a lower SPD value isn’t that upsetting.  To that end, Polarity Field will keep the Generator safe from charging enemy models, which will help both with keeping it from being attacked while also reducing the damage received from enemy warrior models that are denied their boosted damage rolls from charging.  This means that the Generator often only need worry about warjacks and warbeasts closing in on it.  Range Booster is another nice little increase, allowing the AFG to give up its 4″ of movement for the aiming bonus and an extra 2″ of range that is also conferred to friendly warjacks in base-to-base contact with it.  Gunline armies built with or around the many Retribution myrmidons that carry rather impressive ranged weapons will appreciate this.

The Arcantrik Force Generator carries a single weapon, the Teleforce Cannon, which has three different firing modes.  The first is Blasted Earth, an effective RNG 14, POW 16 attack that leaves a 4″ crater that counts as rough terrain.  This is your go-to ability when you needed the hardest strike you can find or if you’re attacking a clump of enemy infantry.

The second attack, Momentum, can slam medium- and small-based models and knockdown large-based models.  While not impressive on the surface, you can get some service out of Momentum by slamming models through your opponent’s lines.  One particular old favorite tactic would be to run a cheap, medium-based unit like a Griffon up to your enemy’s warcaster or warlock, then shoot it with a Momentum shot, slamming the Griffon over the enemy commander and knocking them down so the rest of your forces can finish them off with ease.  POW 14s all around!  Momentum is also a nice means of shutting down enemy warjacks that are marshaled that lack access to the Shake Effects ability.

Its last firing mode is Rapid Fire, allowing the AFG to fire d3+1 times in a turn.  There’s not much to say there.  If you can stack the aiming bonus, up to 4 RAT 9, POW 14 shots isn’t too bad at all.  It’s certainly a solid assassination threat against many a warcaster or warlock if line of sight can be had.  It’s also worth noting that the Teleforce Cannon does have the Magical Weapon ability, making it a nice threat against things like enemy Incorporeal models or Protectorate warjacks under Safe Passage.

In terms of army synergy, there are some nice things to be found.  Garryth’s Death Sentance helps you better incorporate the AFG into assassination strategies while Mirage can let you get a little more threat range.  You can use it to effectively move 2″ while still benefiting from Range Booster.  Kaelyssa’s feat can grant the AFG Stealth for a much needed turn.  Rahn’s Telekinesis can act much the same as Mirage, or it can alternatively be used to help clear line of sight for the Generator to open fire.  Ravyn’s feat gives the Generator fully-boosted attack rolls, making a turn of it rapid-firing potentially pretty scary.  She also has Snipe to give the Generator another 4″ of shooting range. The Farrow Slaughterhousers wrap up the last of this month’s previews.  With Stormblade defensive stats, this unit will often be a bit tricky to get to their target intact, so you’ll have to do some careful judgment with their deployment and movement.  Be wary of ranged armies.  Tough does help, but I’ve found it to be such a random mechanic that you can never truly count on it.

Offensively, there’s a lot to love.  With SPD 5 and Reach, Slaughterhousers can hit you from 10″.  An effective MAT 8 on the charge gives the unit great accuracy while Finisher gives them the hitting power they need to cut down heavier threats.  Take Down seems a little unexciting, but when it comes in handy, it can be really punishing for your opponent.  Remove-from-play effects can play hell on Fury reaving, abilities that confer souls, or effects that allow models to be returned to play.

Synergistically, Arkadius doesn’t offer much to the unit aside from the potential for granting accuracy and hitting power via Crippling Grasp, but I’ve found that, in lieu of channeling, getting that spell on a good unit for the Slaughterhousers to attack can be difficult and often quite risky.  Carver has a little more to add thanks to his feat, which can potentially allow the unit to strike at 11+5d6 on the charge against a damaged target.  Quagmire can be a nice means for tying down a unit or debuffing their DEF for the Slaughterhousers, but the unit will have trouble benefiting from those abilities.  With their defensive stats, they don’t make a particularly strong tarpit, and with Reach, getting into base-to-base isn’t often an option.  Strongly consider taking along Saxon or Alten.  Saxon provides Pathfinder to a unit that will often strongly want it, while Alten can pop a warbeast for a few damage so that Finisher can trigger.

That’s it folks.  Wrath is upon us very soon!  Discuss!

Author: relasine
Relasine is a veteran tabletop wargamer with over 10 years of experience. His specialty is Privateer Press' Warmachine & Hordes gamesystem. He began writing for BoLS in 2010.
Advertisement
Review Warmachine-Hordes
Advertisement 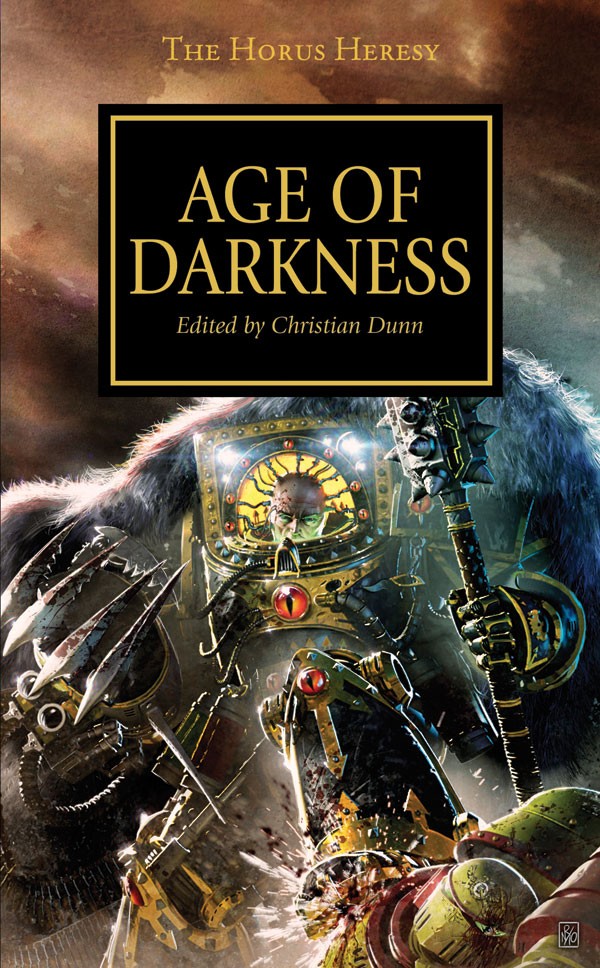