Mercer from Imperius Dominatus here. A lot of people seem to debate which is best on a Dreadknight the Doomfist, Greatsword, or the Hammer. Well I think it’s time to look at all the facts and put this one to bed.

You either love or hate the Dreadknight and if you do run it you need to be careful on what wargear you take as everything for it is expensive which massively inflates the cheap base cost really quickly. There are several pieces of wargear I’m going to look at for the Dreadknight both which work in close combat.

The doomfist is basically a funky name for a dreadnought close combat weapon, but it’s also a force weapon. It has all the standard dccw rules and has two of these so +1 attack which are S6 (thanks to the FAQ). With WS5 it’s going to hit majority of things on a 3+.

The Doomfist is good for several things like smashing monstrous creatures to pieces with 5 attacks on the charge which enough to put some serious hurt down. With the recent FAQ declaring you don’t get S10 (as it’s a dccw) as the Dreadknight isn’t a walker, so instagibbing T5 things like Thunderwolves and Nob Bikers has gone out the window.

Another thing the doomfist would have been good for is smashing vehicles. The WS5 doesn’t really matter here as you either auto hit vehicles or hit on a 4+ or 6+. Though again the FAQ and noted that the Dreadknight isn’t S10 as it’s not a walker so any thoughts of auto pen go out the window.

One of the optional combat upgrades is the greatsword which you switch for a doomfist so you lose the +1 attack for the pair of close combat weapons. Now you have two special close combat weapons and when attacking you’ll need to pick which one you’re using.

The greatsword costs 25 points and for this the Dreadknight can re-roll to hit, wound and armour penetration which is extremely useful if you’re using a cheap 155 point Dreadknight as a vehicle killer. It’s still handy against infantry, but with infantry you will hit mostly on a 3+ as already mentioned and wound on a 2+ against most basic infantry. For killing vehicles though the greatsword is giving the most benefit especially re-roll armour penetration.

One extra thing the greatsword can be used with is the Dreadknight’s hammerhand power. This will make the Dreadknight S7 so now wounding monstrous creatures on a 3+ instead and against armour even easier to score armour penetration, though against armour 14 will need 7 to glance, but you can re-roll with the Greatsword which is extremely useful.

It should be noted that you can still I.D things with the Greatsword as it is still a force weapon, though you just need to pass a psychic test first which means no hammerhand, so monstrous creatures and multi wound models beware!

No I haven’t forgot about the other close combat upgrade; Nemesis Daemon Hammer. Thanks to the FAQ on the dccw this gets way more attractive . The hammer makes the Dreadknight S10 so instagibing things like Thunderwolves and Nob Bikerz is back on the menu and unlike the greatsword you do not need to take a psychic test, they just get smashed. Another bonus is because the Dreadknight is a big ole dude it swings that hammer at normal initiative, which is I4 if I remember correctly. And of course you’ve got the normal thunder hammer benefit too.

I’ve had to shoehorn in amendments into this article as it was written pre FAQ. Back then many believed that the dccw makes the Dreadknight S10 (myself included) this made it a very attractive option. Now everything it can do standard the nemesis greatsword can do and then some more. So I think the overall verdict has changed from the Nemesis Doomfist to the Hammer, with only those two being considered.

The Hammer is allows you to instagib things which is useful if multi wound T5 units are running around at your local meta. Against vehicles you’re auto pentrating which is helpful and against armour 14 you only need a 4+ on 2D6 which is easily achievable.

HOWEVER, After taking all three weapons into consideration, I still think the Greatsword is the weapon to go for. You get some very nice benefits and while you don’t auto I.D things it can still be done if you pass a psychic test to activate the force weapon. The benefits of the Greatsword are so much better than a +1 attack in close combat and make the Dreadknight a more effective tank hunter and monstrous creature slayer. It also should be noted that the Dreadknight is still equipped with a Doomfist and you may still use this if you want you just don’t get the benefits from the Greatsword, but I can’t see why you would want to do this.

Let me know what you think – greatsword or doomfist or the daemon hammer?  How do you equip your Dreadknight’s on the tabletop for combat? 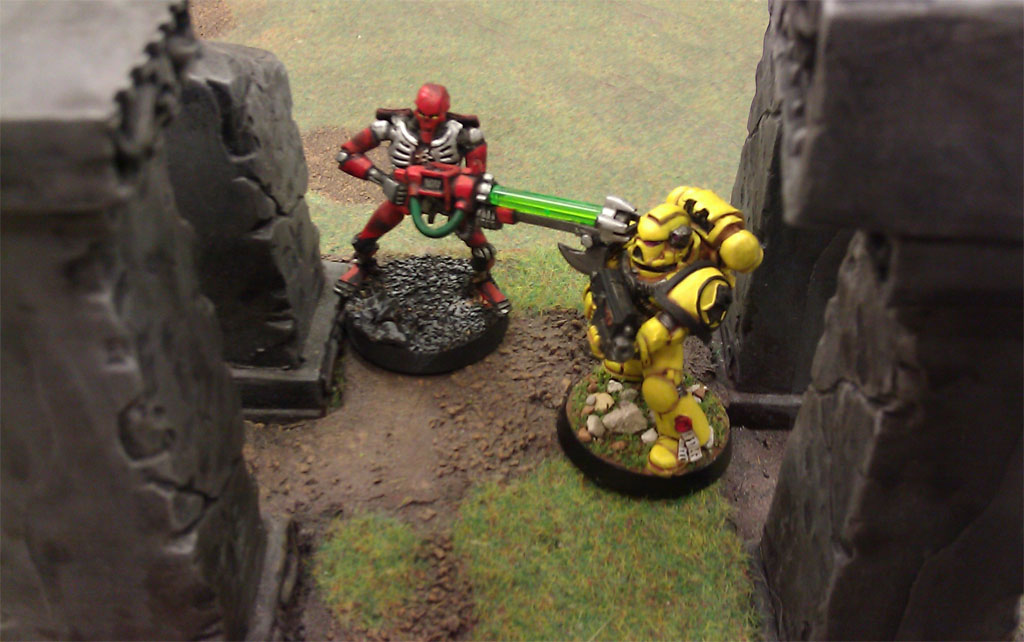