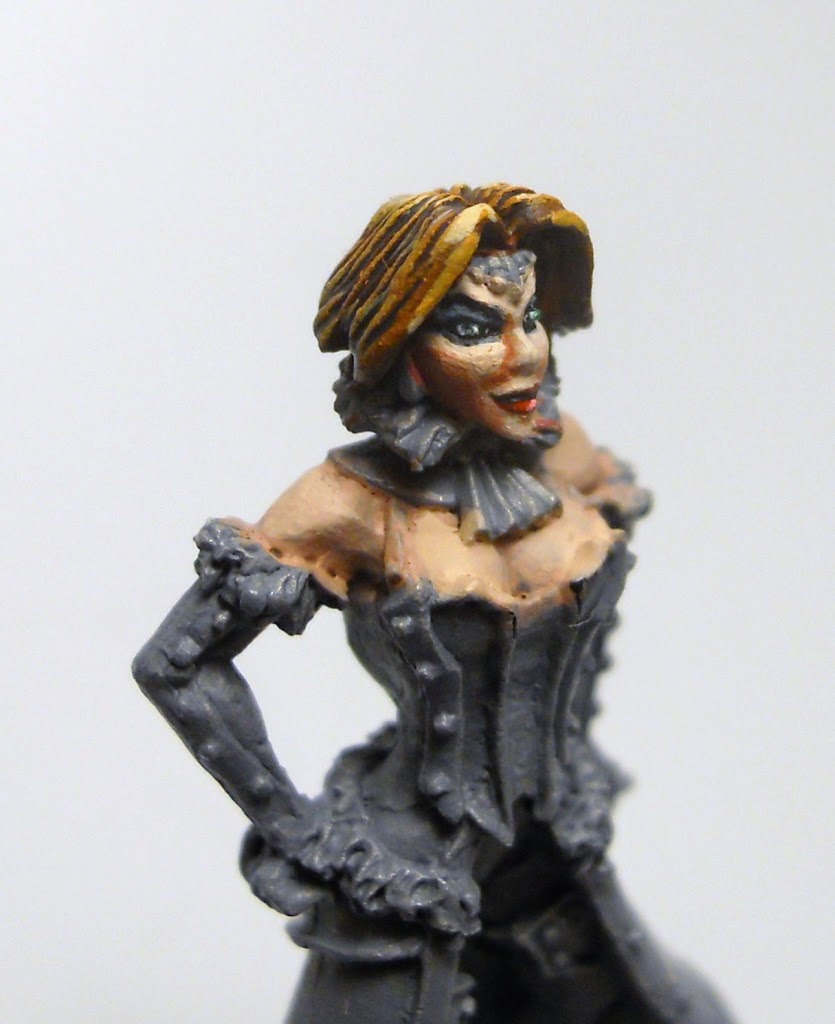 Faces are easily the most important part of any miniature. And while they can also often be the most challenging part, that just means getting it right is that much more rewarding. Women’s faces require special consideration as a subtle touch is required to maintain the appearance of femininity.


Meet Madelyn Corbeau, Ordic Courtesan. A Warmachine Mercenary solo my armies have been lacking for too long. This makes her the perfect candidate for this tutorial. I always start by painting the entire surface of the eye black. Next up, add white to the surface, trying to leave a nice clean black edge. If you screw it up a little like the eye on the left its no big deal. Some people can create a good enough effect by just using white on the edges, and leaving a black pupil in the center. It spares a little time, but I’ve never been able to create a good round pupil this way. Even with a fairly steady hand dotting the middle of the eye can be a challenge. My first attempt here left her staring in two different directions. Adding just the right amount of pupil is also important. Too big and the eyes will just look black from a distance. Too small and your face will look surprised. Since I was painting Madelyn here for a tutorial, I decided to knock it up a notch and attempt something I’ve only tried twice before: colored eyes. You want to do colored eyes in the same way as you would gemstones. I start mine by adding a pale green inner circle to the iris. Then I paint over this with a darker Green, trying to leave a thin crescent of the pale green beneath the darker green. This represents the luminosity of light captured in the liquid of the cornea.

Now they need a tiny black dot in the middle, followed by a tiny white dot a little right of and above center. They’re not perfect, but given the scale, I think I’ll take it. Now we can move on to the rest of the face. I like to start with the mascara. I have no intention of leaving this much makeup beneath her eyes, but it will be easier to clean away the excess when I do the skintone highlights than to paint on a line beneath the eye that’s as thin as I will want it. But first: shadows and highlights. I mix a little black with the blue of the mascara and shade beneath the eyes and beneath the brow ridge. A bit of white is mixed with the blue, and used to highlight the eyelids. I add three layers of highlights to her skin in the process of cleaning up the excess mascara. At first elf flesh, and then just white are added to the initial flesh color. Now for the rouge. I start by applying it rather liberally Then I mix the initial red with some of the flesh tone to blend the rouge to her face more smoothly. Unfortunately, despite using paint thinned with flow improver I managed to cake up a little bit and give her a “wrinkle” beneath her right eye. I would have to fix this later. This was also when I added some definition to the nose and creases above her mouth with thinned down Tanned Flesh. Its important to keep shadows very subtle on female faces, as exaggerated lines add the appearance of age. Next up is the lipstick. I begin with Scab Red. This gets a Blood Red highlight. Then to make those lips look extra luscious, a final off center highlight of white mixed with just a little Blood Red. At this point I’m ready to move on to the hair. I begin with Dark Flesh, which gets a wash of Scaly Green. The greenish blue in the recesses will cause her final orange highlights to pop even more.

Next I simply drybrush all the hair with Vermin Brown. Then, a fainter drybrush of Vermin Brown mixed with Vomit Brown. Then, just on the top of the head and on that bit of curl down towards the bottom I do some more drybrushing with just vomit brown. And finally, some manual highlights of Vomit Brown mixed with white to represent light reflecting off the hair.

With the hair done I go back to get rid of that irritating wrinkle that cropped up before. Painting over caked-on paint to try to even it out will only compound the problem. To fix it, I used a round-edged sculpting tool, and just applied gentle pressure to flatten it out. While the incident has left the appearance of an uneven surface, its almost impossible to notice on the actual miniature, which might be a 10th of the size of this photograph.

~Well the face is done but I’ve still got a ways to go. Hopefully it won’t be too much longer before I get to put Madelyn here on the battlefield. Then maybe I’ll see if I can’t find a way to work her into a tactics article.

Author: Ben Williams
Ben Willimans is a Professional Painter and Columnist at Bell of Lost Souls. He has been involved in the hobby and art side of miniatures and the tabletop gaming industry for over 20 years. He has won multiple national painting awards.
Advertisement
Mercenaries Painting Warmachine-Hordes
Advertisement 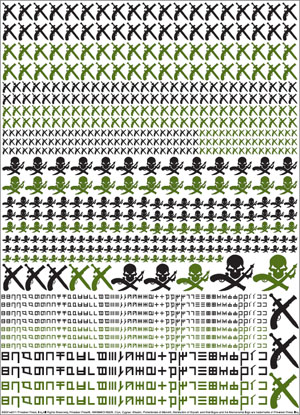