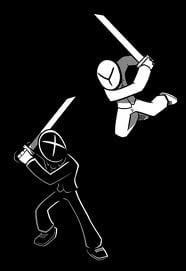 The Dark Eldar have got some very cool fast attack choices. I’m focusing on two of them today: Scourges and Reavers. Both are cool units, but if you had to pick one or the other which one would it be? Scourges are basically Dark Eldar jump infantry – which, model wise, have some uber cool wings. They have the standard Dark Eldar profile but have a 4+ armour save thanks to ghostplate armour. Remember that gives them a 6+ invulnerable save too, not that it’s particularly awesome. Weaponry… they have a shardcarbine which is the normal 4+ poison weapon, but is assault 3 and a nice 18″. Throw that in with the Scourges 12″ movement and you’re talking about a nice 30″ threat range in total. Lastly, they have plasma grenades, which are your normal assault grenades.

Scourges have several options for wargear, and it’s important to note that for every five models in the squad two Scourges may upgrade their weapons. A unit of five of these guys will set you back 110 points, so not that massively expensive.

Shredder and splinter cannons will complement the units anti-infantry fire power. I’d probably go for the shredder for some S6 nastiness – but the splinter cannon may rarely fire the full 6 shots because the Scourges maybe on the move. It should be noted that the shredder is AP- so don’t think that S6 will be handy against vehicles as it will be -1 on the damage table, but it can supress vehicles or throw a spanner in your opponents plans for a turn.

Haywire blasters are sort of dual purpose. They are S4 AP4 but only assault 1, but still handy against infantry. They really shine against vehicles though as instead of armour pen you roll a D6, on a 1+ does nothing, 2-5 glancing hit and 6+ a penetrating hit. I’m not really 100% sure on these, and I think to make a significant impact you will need several haywire blasters in large numbers so you’re really looking at a full squad of Scourges to make the haywire blasters work.

Heat lance, blaster and dark lance are all dedicated anti-tank. We all know what the latter two can do. The more interesting one here is the heat lance. The heat lance is basically an S6 melta combined with a lance. Average 2D6 is a 7, so providing you’re in half range of the heat lance (full range is 18″ to 9″) – which is dooable thanks to the Scourges movement – you should wreck some tanks. Oh, and it’s AP1, of course. The only issue I see with these is they will only be of real use for serious armour. I know that sounds strange, but let me explain. In the current Tankhammer game play you see plenty of Rhinos and Chimeras, which are armour 11 average. A standard melta which is S8 doesn’t need to be in 2D6 range to penetrate these, though of course it stands a better chance. With the heat lances you will always have to be within 2D6 to make them work because of the lower strength. It should also be noted that against monstrous creatures (not a ideal target but can hurt them) they will mostly wound on a 4+ while the normal melta wounds on a 2+.

You can upgrade a Scourge to a Solarite, which is basically a squad leader. Benefits here is the LD9 and access to close combat weaponry. I’m not a massive fan of upgrading to squad leaders, I think they should be included in squad costings, though in this case it might be worth it. Scourges can hold themselves in combat, and a venom blade or agoniser from a Solarite can help to finish a squad off after taking fire from mass shardcarbines; as well as anti infantry weapons, or blasting a tank to pieces and charging the former occupants. Reavers are your jetbike units and they are sort of like Wytches on bikes, but they don’t get the 4+ invulnerable dodge save. What they do get is the standard Dark Eldar profile but with T3(T4) thanks to the jetbikes. They also get a splinter pistol and close combat weapon that can be handy in combat, especially since they have combat drugs. If you’re lucky you could get a 3+, making those Reavers S4. Add in pain tokens to get furious charge and you’re talking S5 I6 attacks. Adreanlight would also be handy for the +1 attack. I’ll talk about the Reaver Jetbike in a minute, but I just want to point out that Reavers get skilled rider special rule, too. This means they re-roll any dangerous terrain tests when entering terrain – cool.

Now onto the Reaver Jetbikes. These are Eldar Jetbikes which means they can move 6″ in the assault phase even if not assaulting. The Reaver Jetbike also has two other qualities: it can turbo boost a whooping 36″ which is great for contesting objectives or acting as a distraction unit, and it has bladevanes that inflict D3 S4 AP- hits. The turbo boosting is cool, though I don’t think bladevanes are anything to write home about. The Reaver Jetbike also has a splinter rifle, and because it’s a bike – which means it’s relentless – it can still fire the full range or rapid fire and still charge.

In terms of of additional wargear Reavers have little choice. They get heat lances and blasters and then some unique wargear, cluster caltrops which inflict D6 S6 hits with bladevanes, and a grav talon – which works like bladevanes, but if the unit suffers a unsaved wound it must take a pinning test. Neither of the unique wargear are worth the pointsI find, particarly the cluster caltrops… which are 20 points!

Like the Scourges, the Reavers can upgrade to a squad leader or an Arena Champion. The Champion gets the same close combat options as the Scourges, and might be worth considering. Seems Reavers want to be in combat thanks to combat drugs and the two close combat weapons.

I think this is a bit of a tough one. Looking at both units they are both pretty cool. It’s actually hard to say which is the better of the two though as both have different roles. Scourges can do anti-troop like Reavers, but do this via shooting instead of close combat. Scourges also only need five models per unit to take double specials while Reavers need six to take double specials.

Both units would be handy coming out of a webway portal (Reavers are jetbikes and portals only stop vehicles appearing) laying down some fire power busting infantry, a tank, or jumping into assault. Reavers do have the advantage by flying over a unit and using the bladevanes, so can do some damage when turbo boosting. They could instead fire the splinter rifles using rapid fire then charge with 3 attacks each. However, it should be noted that an affective unit of Reavers (unit of five) costs only slightly less than a very decent unit of Beastmasters (about 130 points), which put out far more attacks… and if taking Razorwings you get rending, too.

I think the last sentence in the previous paragraph has nailed it down for me. Scourges are excellent. They bring anti-tank and have access to the limited heat lances. They can also do anti-infantry perfectly fine, and while not bringing as many attacks to the table in close combat as Reavers they could certainly duke it out in a fight after laying down a evil amount of fire power. The thing with Reavers is that Scourges can do the same job and for slightly cheaper. Scourges can do the anti-tank cheaper thanks to double specials in five man squads instead of six man squads for Reavers. They have more anti-infantry fire power, too. Both units can be used to contest objectives thanks to their speed, although Reavers definately have the advantage here thanks to turbo boosting 36″ and moving 6″ in the assault phase. The only thing Reavers can do better than Scourges is close combat- and for that I’d rather take a unit of Beastmasters of around about the same points that will be a lot more affective in combat.

Scourges or Reavers which unit you like the best? Or do you not like either? Let me hear your thoughts.