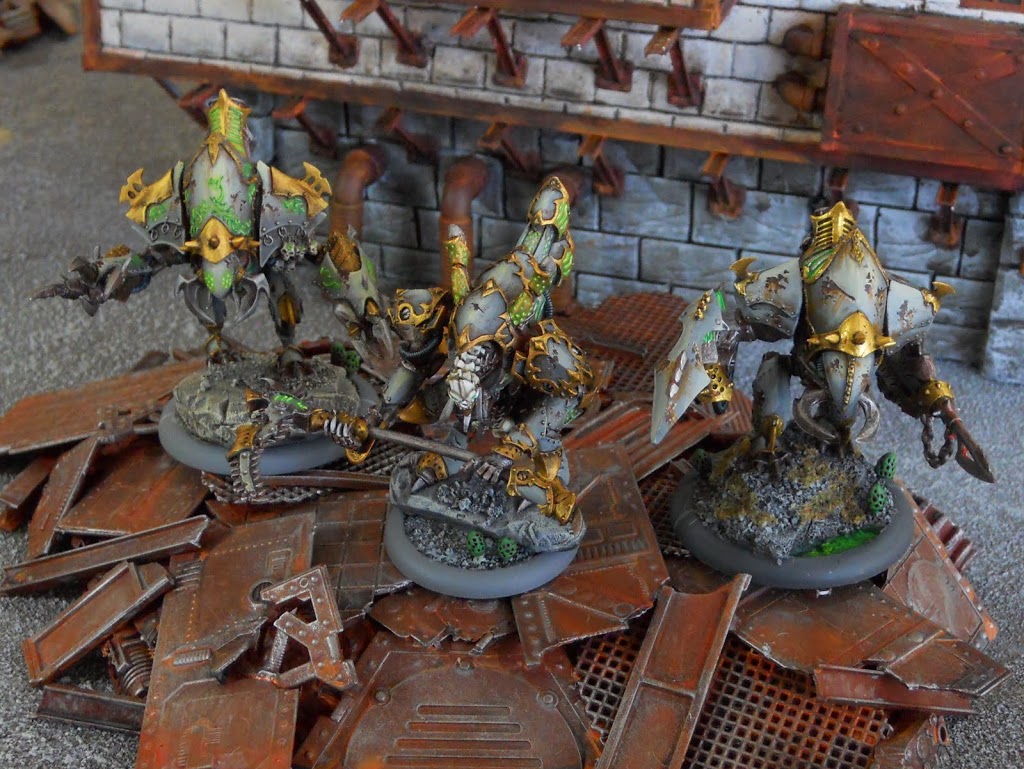 This June saw the release of 5 new warcasters for Warmachine including, of course, the newest agent of the Nightmare Empire. Cryx players should be quite pleased with their new acquisition. Lord Exhumator Scaverous is a real beast with an extremely competitive bag of tricks.

He has a spell list that’s every bit as impressive as you would expect from Lord Toruk’s premiere compiler of Arcane Lore and his feat brings it all together. Lets break it down.

Since it really puts everything else in context, I’ll go ahead and begin with his feat. Black Gate will let all friendly Faction models in Scaverous’ control area gain boosted magic attack rolls, and let Scaverous cast his spells for one less focus. In addition, enemy models will spend 1 more focus or fury to cast their spells or animi. Honestly though, the second part seems pretty inconsequential to me, since I will be planning to end the game by assassinating the enemy caster on Scaverous’ feat turn. But before I explain how, lets look at this lich’s spells.

Death Ward will give a model or unit +2 ARM, and let you pick what column a warjack takes its damage too. To me, the ARM bonus is secondary to being able to pick what part of my warjack is damaged. It means its a lot less risky to take a free strike when charging, since I can just about guarantee I won’t lose my movement or Cortex on the way in. This is important as Scaverous excels at maneuvering for the ‘caster kill.

Excarnate is an offensive Pow 13 magic attack that lets you add a grunt to one of your existing small based undead units if you can kill a living enemy model with it. Scaverous is not the first to get this spell. Lich Lord Asphyxious already has it. But up until now it never seemed worth the three focus it costs – even to bring back an expensive Bane Knight. But there’s a really dirty Excarnate trick that’s been bouncing around the internet that only Scaverous can pull off. By using this spell along with Telekinesis (more on that later) you can get a Bile Thrall to Purge an unbelievable 16″ out from where it started its turn. I’ll spare the details and let you guys figure out how all the math fits together – assuming you haven’t read about this somewhere else already.

Feast of Worms is Scaverous’ unique spell. Its is a multi-tool, giving you a pow 12 four inch blast that will also reduce the armor of anyone in it by 2. To make sure you actually get to use that bonus outside the initial casting, the AOE remains in play and the effect in it can be upkept. Because of the armour penalty, the blast damage will count as POW 8, which means the spell is a little better at killing most infantry than its base POW would suggest. For the most part though I plan to use it as a more expensive, less effective Parasite (the stock -3 Arm debuff spell). While I would probably prefer if Scaverous just had Parasite instead, Feast of Worms is a welcome tool for a warcaster with so many other great tricks. Its biggest drawback is its cost of 4 focus. This means Scaverous won’t really be able to rely on it as an effective infantry killing tool.

Ghost Walk is always useful as it gives you the option to move through most forms of terrain. It also grants immunity to free strikes which may be the most important part. This will let you get key models out of (or even into) sticky situations without having to worry about taking damage. I think the most amusing thing you can do with it however is use it to allow a Wraith Engine to charge across a unit with magical weapons.

Icy Grip inflicts a -2 penalty to an enemy warrior model/unit’s defense, and keeps them from running or making special attacks. While the -2 is definitely the coolest part of this spell, with Telekinesis and Cryx’s nimble arc nodes you can actually hit an important enemy unit with it turn 1 and maybe keep it out of the game until its too late for it to make a difference.

Telekinesis is Scaverous’ last spell and for me this is really the one that defines him as a caster. Obviously I’ve used it so far to put every other ability he has in context. Cryx is already fast and maneuverable, so to be able to pick up a model and place it within 2″ of its current location really lets Scaverous set things up for the kill. It gives the already brutal tools in the Cryx arsenal that much more flexibility to get their job done.

So before I go into general tactics, there’s one more thing that must be considered with regards to the Lord Exhumator. Erebus, his pet warjack, will gain a soul token for Scaverous for every model it destroys while in his control area. Scaverous can then use these souls as focus next turn. Since Erebus also has Overtake, it means its not too difficult for him to gather 4 or 5 with just normal melee attacks. And there’s the potential for even more if he uses a trample power attack. Since he wasn’t released until very recently, all my Scaverous games up until writing this have been played without this Warjack. Its left me with a very strong feeling that Erebus will be included in all my Scaverous games from now on. Even with 7 focus and a feat that makes spells cheaper Scaverous is a focus hog, and I’m more than happy to bring along a warjack that can offer so much help in that department.

So what you have with Scaverous is a caster who can play several different and interesting games. On the one hand, you can go heavy Bane, and use repeated castings of Excarnate to grow your army to a huge size. With Erebus along for the ride to gather Soul Tokens for Scaverous, its possible to create six new Banes on your feat turn. 7 if there’s a Skarlock to help. But (and this would sound ridiculous with any other caster) why bother making new troops when you could just sling those 6 boosted to hit pow 13s at the enemy warcaster and end the game right there? With Cryx’s nimble arc nodes there aren’t many places a warcaster can hide from a range 10 spell. And if the enemy warcaster’s arm looks too high to take down with just Pow 13s don’t worry. With Telekinesis costing only 1 per cast on Scaverous’ feat turn you can move a lot of pieces around to make sure something really nasty can charge the enemy warcaster. So here’s the first list I had planned with Scaverous:

It hasn’t been doing as well as I’d like. It was designed to excel at moving pieces around and making sure the Nightmare had a clear path for a caster kill. Unfortunately enemy infantry has been getting in the way a lot and foiling my plans. Feast of Worms is just too costly to cast to clear a path, and its pow is too low to reliably kill anything with an Arm value higher than 13. I’ve gone back to the drawing board and next time I bring Scaverous out this will be the list I bring along:

I feel like this opens up a lot more options and lets me take full advantage of all the dirty tricks Scaverous can use. Now I can start making Banes, and have a counter to high def and arm infantry with the Bile Thralls. A lot of people had great success at WARgamesCon with things like Iron Fleshed Kayazy or Winter Guard so I know I’ll need a counter for those things if I want my list to really be successful. I’ll also probably try swapping the Wraith Engine in for the Reaper and Warwitch from time to time just to mix things up.

~ So those are my first thoughts on The Lord Exhumator. Does anyone else have a great Scaverous list to share?

Author: Ben Williams
Ben Willimans is a Professional Painter and Columnist at Bell of Lost Souls. He has been involved in the hobby and art side of miniatures and the tabletop gaming industry for over 20 years. He has won multiple national painting awards.
Advertisement
Cryx Tactics Warmachine-Hordes
Advertisement 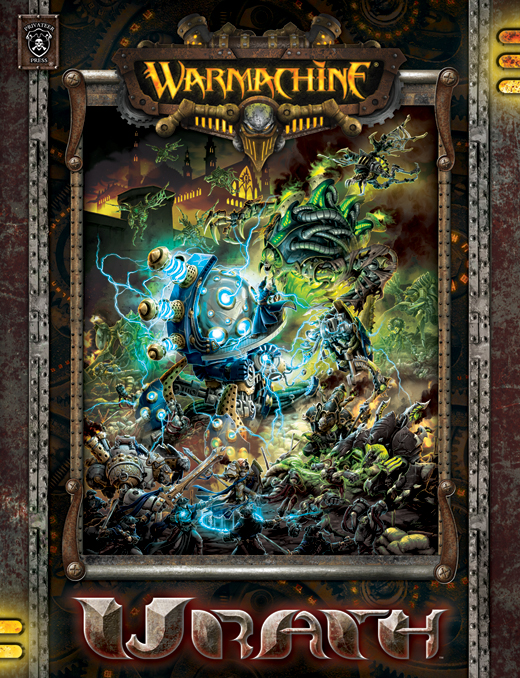