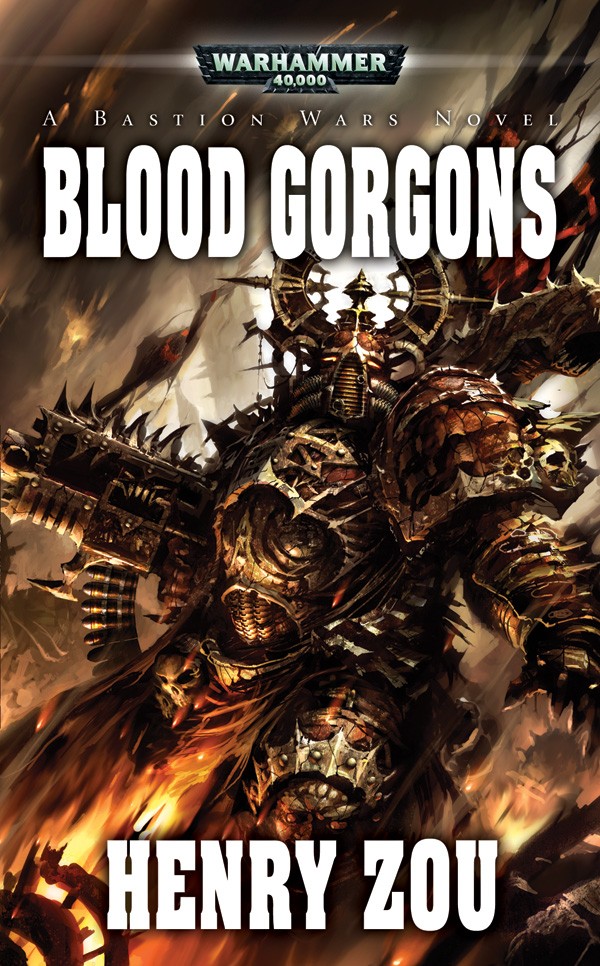 I came to review Blood Gorgons in a most unusual manner. BDub asked me to hold onto the book while we were packing up WARGamesCon to make sure it didn’t get stored away until next year. Then, while in the process of returning the book to him (naturally), I went on vacation and managed to read all of it.

I’ve had only passing encounters with the CSM fluff and know almost nothing about them post-Heresy, so I was a little worried about how interesting the book could be; how much senseless fighting and raiding can you cram into 400-or-so pages?  But I was pleased that Henry Zou weaves a story of Chaos Space Marines that logically fits with both existing Space Marine background and (what I know of) Chaos ideals with interesting and insightful details.  And have no fear, there’s plenty of fighting.

Blood Gorgons centers around Bond-Brother Barsabbas and details life aboard the Gorgons’ space hulk fortress and on the harsh slave/recruiting world of Hauts Bassiq, where the bulbous-headed warriors of the Godspawn defeated the evil double-headed eagle many centuries ago.

After the defeat of their leader, Barsabbas is stranded alone on Hauts Bassiq.  There he must unravel the mysterious threat facing the Gorgons and return to their fortress-hulk, all the while defeating and dealing with comrades in Chaos, mundane humans and a sprinkling of Xenos. The plot is somewhat predictable, but the strength of the story is in the thoughtful details and character interactions.  I especially enjoyed the release of the “incarnation of death” because of the small bit of comic relief it brought to the otherwise predictable portion of the narrative.

Head on over to the Lounge to discuss “the Chaos way of life” as depicted in recent Black Library novels.