Caldera here.  Its been two weeks now, and I have something to say about THQ’s Space Marine…

This is one of the most fun games I have played in a long time!  I absolutely love this game.  I play on Xbox so take that for what you will.  While some prefer their shooters on PC, I personally think there is a reason why Modern Warfare is one of the most successful games of all time and is on Xbox.

Campaign Thoughts
On to the game play.  The campaign is sweet.  I play on hard because I’m cool like that – I like the challenge.  The campaign was indeed merely hard at moments and stupidly hard at others.  I say that only because of some of the design elements of the game.  As someone who originally wanted to design games, I tend to spot these things with regularity.  Example number 1 : while enjoying smashing face with a thunder hammer and quite enjoying myself, I died several times to stupidly accurate rocket fire…..from Orks!!!  Now heavy fire like that is supposed to make the game hard I know and make you move around to avoid it.  It was just something that nagged at me as a tabletop player because all of us know the fluff.  Orks just are not that good at shooting, so why in this game are they deadly accurate with their rockets?  I started to learn how to time the dodging of the rockets or take the time to take those out first so its not a game ruiner at all, just kind of peeved me as a 40k gamer is all.

As a 40k player, I loved that Space Marine has an astounding amount of detail in it.  Everywhere from the sound you make when you run to the weapon sounds.  It’s just amazing.  Almost everything you do in the game functions like you imagine it would.  You can play a thousand games on the tabletop and still not *get* the sense of satisfaction of laying down a full burst with a Heavy Bolter.

The plot driven fun wrought in the campaign was just celicious!  I thought the things the Orks say and do are hilarious.  When you throw a grenade at them they scream, “Oh no, stikbomb” and run away from it! haha.  The executions in the game are violent as all get out but I think any normal person won’t be bothered by it – it is rated M after all.  I thought they were cool as hell.  Some of them made me giddy.  For me, I know it’s just a game and I get to act out this side of my imagination.  You get to take the thunderhammer and use it like a baseball bat to the Nobs, it’s awesome!  Also, suplexing Chaos Marines and then smashing them to bits is frakking sweetness!

Multiplayer Thoughts
Multiplayer is stupendous as well.  Imagine a cross between Gears of War, Halo and Call of Duty.  Its your basic  third person shooter, where your armor are your shields, and your kills gain experience towards leveling up and unlocking perks.  You play as either a Space marine or Chaos marine.  This is chosen randomly depending on what team the computer assigns you to, similar to Terrorist or Marine in Modern Warfare.  If you’re in a party and you join a new game the computer seems to randomly assign the group to fill spots in the ongoing game, so you can find yourself killing your party members –  Quite amusing I might add 😛  After the first game though, you get assigned teams together which is fine with me.

The game play in multiplayer is really fun for me.  There are so many different ways you can play.  There are three main classes – Tactical, Devastator, and Assault.  Within these classes there are lots of different weapon loadouts you can choose from.  Once you have unlocked them that is, and it doesn’t take too long at all.  By level 20 you have unlocked all the different types of weapons.  You can also choose to specialize in your weapon of choice simply by playing it more often and getting better with it.  There are two perks you can unlock for each weapon mostly.  Those perks make you do more damage or have more ammo for example.

The balance needs to be tweaked slightly in my opinion but not too much.  There is a semblance of  rock – paper – scissors in Space Marine.  Where the Dev is a rock, the Assault is paper and the Tactical is scissors in my opinion.  All the classes can kill each other, they generally have built in weaknesses to keep any one class from dominating.

The armor customizer is pretty frakkin sweet too.  You can change how your Space Marine looks in game on both the Chaos and Loyal side of things.  I have one main set I use for Space Marine, which is my Pre-Heresy Thousand Sons red armor with white trim on the shoulder pads.  Normally its gold on the trim but there is one company that wears white, veteran company I believe.  Its in the Heresy anthology artbook.  Anyways, I also have my Star Phantoms dressed up in the blue -grey with white trim theme that was created on here.  That’s one of the best parts though, I can have my marine look however I want! It’s inspired me to work on my Star Phantoms more.  I’m sure we will have a dark blue and orange BoLS theme duking it out online soon as well.

So in the final balance, the game was well worth the wait. I am really really enjoying this game, and I imagine I will be for a long time to come.  My handle on Xbox is Caldera02 so send me an invite if you wanna game. I’ll be the Devastator lighting you up with my Plasma Cannon.

So who’s jumped on the Space Marine bandwagon and what do you think? Drop your handle and favorite classes and weapons in the comments. 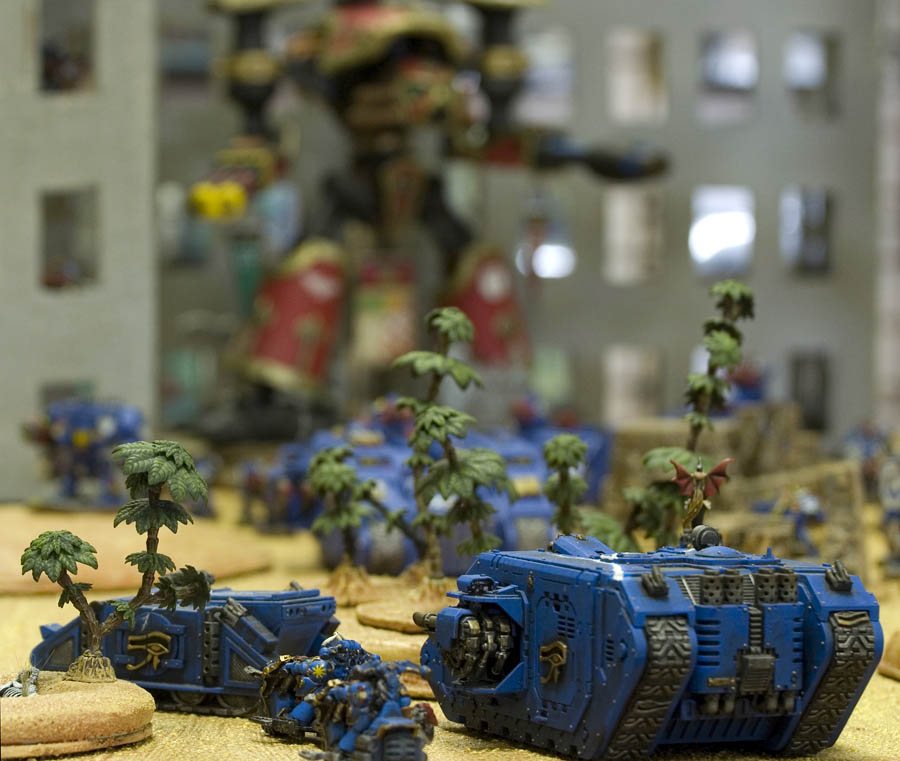