NOVA is over – it’s stat time! MVB has kindly given me lots of information so it’s time to data mine to see where the 40k Meta is now.

Over at 3++ is the new black we covered the NOVA open as extensively as possible considering the time zone difference with a couple of reporters on the ground. Overall the experience seemed fantastic and there are a lot of great blogs giving some breakdowns on the event itself and their games. You can check out reports from Gramps, Nikephoros & Timmah, the back 40k crew, Hulksmash & Dash, stillfrosty, Xaereth and Jawaballs. I’m sure I’ve missed quite a few people so just drop a link in the comments and I’ll add it here. Overall the event seemed like a giant success despite all the weather havoc going on before and during the weekend. Kudos to Mike and his team for such a well-run event and not just for 40k and I hope to one day make the trip over the damn ocean there ^^. Props needs to go out to the 11th company for their live streaming on the day as well of course!

Now if we recall, recently I looked at the army make-up of the successful ‘Ard Boyz Prelims. Unfortunately we didn’t have all the data we wanted so it was a very wishy-washy affair in actually analysing the data. With a hefty grain of salt we saw the 5th edition books minus Tyranids and plus Orks seemed to separate themselves from the pack in terms of doing better overall. With full data access to NOVA however, well we can do the actual analysis we want and not only see how each army did overall in terms of winning percentage but the percentage of each army which did well. For example in ‘Ard Boyz there were a lot of Grey Knight players going through and it was hypothesised this was based upon such a large number of players. By looking at the percentages we get a better picture of what’s happening.

Before we go on though we must point out that NOVA is in fact multiple tournaments in one. Day 1 seeds everyone into Day 2 where there were 13 brackets of 16 players which played their own four game tournament ending up with 13 undefeated players on Day 2. Whilst this shouldn’t affect the overall winning percentages and percentages of armies which made it into the top part of the draw, keep in mind that some players who did really well Day 1 (4-0/3-1) ended up doing poorly on Day 2 (0-4/1-3) due to stiffer competition. Which armies do poorly on Day 2 in the upper brackets may give us an indication of said army’s competitiveness if they are consistent between the brackets. MVB has also promised to release some weighted data which will forcibly rank players on their Day 2 placement (i.e. whilst you may have gone 0-4 on Day in Bracket 1, you’ll still finish in the Top 16). We’ll do another post when that comes along and for those of you who have read this on 3++ already, there is minimal difference between these posts.

Winners and Losers
So! let’s get to some numbers. I’ve got the actual numbers and graphs for those who prefer either method. We’ll start with the number of players for each army and their win percentage. There were 204 players total. So what we see here are the usual suspects of 5th edition doing well based on a high number of players. Blood Angels, Grey Knights, Space Wolves, Imperial Guard and Dark Eldar all have 50%+ win ratios and a decent pool of players. Unsurprisingly Grey Knights don’t have the highest win %. Knowing five GK players made the top 16 also suggests there were more GK players in the bottom tiers to balance this out (or we’d have seen a win percentage approaching 60%).

Dark Angels are also right up there in terms of winning percentage though with a small sample size this isn’t reliable. One would expect them and Black Templars to do decently well with their 5th edition FAQs so this isn’t exactly an anomaly but to see them top the charts is pretty impressive. The low Black Templar percentage is somewhat surprising however but again there is a low sample size. What is interesting to note is the Space Marine winning percentage which is quite low despite being a 5th edition codex with strong builds (Vulkan, Bikes, etc.) with an appropriate sample size. Further digging would be required to find out if this was weighted by a lot of ‘less competitive’ individuals using Space Marines or whether this is the natural spread for Space Marines. i.e. look specifically at their lists and how they went on Day 2.

Once again Orks seem to be in limbo between the 5th edition books and the rest of the pack. Whilst they are below 50% they are not so by much and just a little bit ahead of the rest of armies. We then have a series of older books including Tyranids + Space Marines all hovering around in the 40% win ratio. Against the 5th edition books, this data looks to support that these books have a harder time and whilst aren’t terrible, generally suffer in comparison (again though, Space Marines being here seems an anomaly). We do have to take this with a grain of salt as only Orks, Nids and SM here have decently sized samples.

If we look at the competitive results spread we could identify more information. Let’s look at the percentage of armies which scored greater than a .60 which is an arbitrary number I have picked and ends up identifying the top 18.6% of the player field. Remember, these results have not been weighted for opponent strength on Day 2. Fractions indicate number of players scoring .60 or greater out of the total number of players for that army. We see very little change at the top of the order though we still have a small sample size for Dark Angels and see Grey Knights slip back down the order somewhat once again indicating there might have been quite a few GK players in the bottom rungs.

What is interesting is how far Imperial Guard slips and the complete lack of regular Space Marine armies. A lot of IG players have voiced some complaints about the terrain being too bunched together and having too much BLoS. I believe the judges asked people to move the terrain out if it looked bunched together (I wasn’t there so cannot comment but I have heard conflicting stories in this regard) but in terms of BLoS terrain there was perhaps too much. There must be some for game balance but sometimes it seemed there were more BLoS terrain pieces than not. We won’t discuss the layout here as MVB has done this before and the standardisation, whilst potentially boring, helped the validity of the tournament in terms of variables controlled and aimed to minimise the impact of poor terrain on wins.

Furthermore, we see Witchunters and Tyranids sneaking into the top ~20%. We cannot take much from this without knowing their full line-up and army lists but it does indicate you can do well with a sub-par list if you are the better general. Unfortunately, as we can see in the top 16 bracket where the single Ork and Tyranid player went 1-7 combined on Day 2, when you repeatedly play such a list against good opponents with good lists, it’s hard to win. Despite both of these armies making the final top 16, they do not appear in these results having both scored around .45 due to their losses on Day 2.

If we take the competitive scoring down to .50 or the top 36.2% of the field the breakdown becomes like so: We see an immediate increase in number of armies and placements of specific armies such as Dark Eldar and Imperial Guard. We also see average increases for the rest of the top end 5th edition armies indicating a relatively normal distribution of these armies – ergo some indication of balance. This represents the more upper midfield of NOVA and we can see a greater spread of armies as the supposed generalship dips a bit (so those players with sub-par armies but good generalship are more capable of overcoming good armies) as well as significant increases for the ‘lower-end’ 5th edition books observed from the top of the NOVA heap – in this case Space Marines and Imperial Guard which both have large-ish sample sizes. This could indicate some factor impacted them on the day (i.e. terrain, lots of so-so players, lots of 3-1/2-2 armies not doing so well on Day 2, etc.) or could be indicative of Space Marines and Imperial Guard being on the bottom of the 5th edition pile (excluding Tyranids obviously). Unlikely as they both have very strong builds but possible.

We see some of the older books creep in here as well including Tau, Orks, Black Templars and Necrons. This once again indicates players with above average skill and milking the most of their respective codecies but not fighting at the very top of the rankings. It does show you can do well with these older books but you are going to have a very hard time repeatedly beating the best lists run by the best players.

Conclusions
What all of this data indicates is what we have pretty much know in terms of what’s good and what’s not. The 5th edition books bar Tyranids do well though Space Marines had a rather medicore appearance here and didn’t reach the upper tiers with regularity. These are probably the weakest of the two 5th edition books, Tyranids due to design flaws and Space Marines are showing their age – again though, more digging needs to be done in relation to Space Marines on such a poor showing. Orks seem to flit between being a ‘2nd-rate’ codex such as Eldar and Tyranids and a top-notch 5th edition style book. They, like the other older books, can do well in the middle of the pack and pose problems to opposing generals but when consistently put against the likes of 5th edition books with good generals, it’s hard for them to win consistently.

These results seem pretty consistent with what we saw from the ‘Ard Boyz results in terms of army groupings. We now actually have total army numbers and win percentages so the data is far more reliable and we see Grey Knights being shoved firmly back into the 5th edition pack. Now all we need is weighted results from MVB and we can get some more data on what happened specifically on Day 2 in the brackets compared to overall.

And a quick link to Whiskey & 40k before we go. MVB has recently put up a bunch of photos from the event and has also sent out surveys to all attendees – I’m sure he’d greatly appreciate the feedback! Now, your thoughts on these results?

Author: Kirby
Kirby Enthusiasm is one of the well-known players in the Warhammer tabletop gaming community. He is the man behind the 3++ website, and a Warhammer 40K competitive player. He began writing for BoLS in 2011.
Advertisement
Editorials Tournaments Warhammer 40k
Advertisement 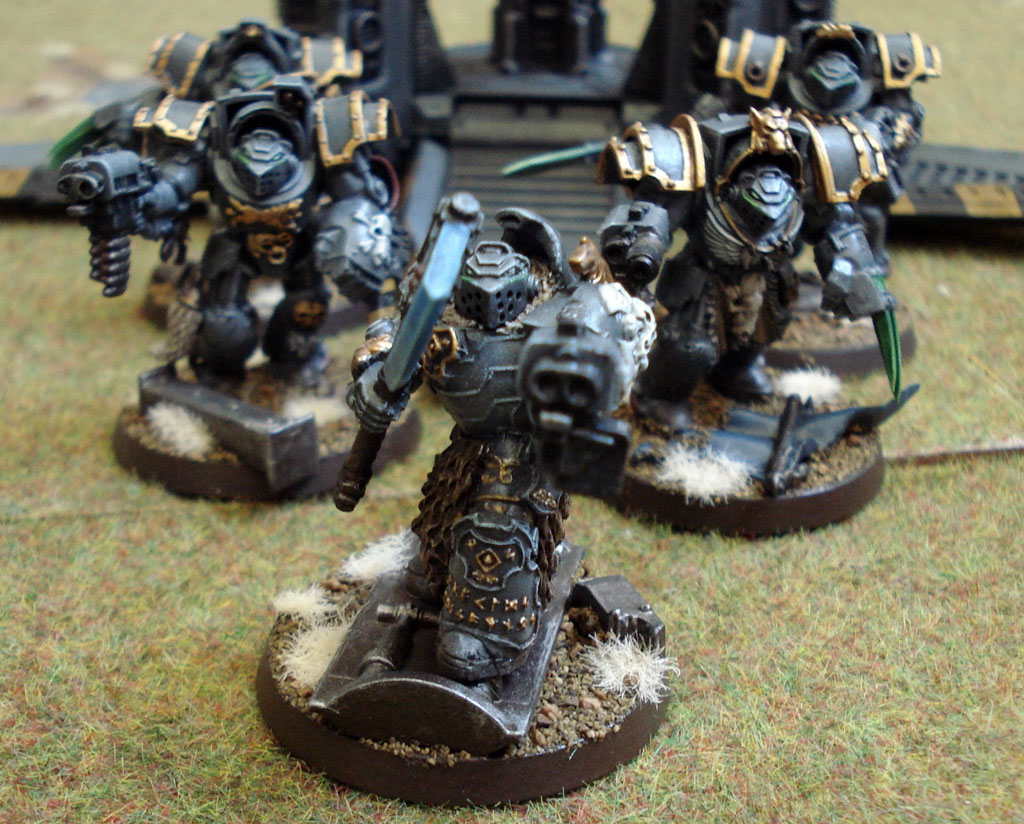