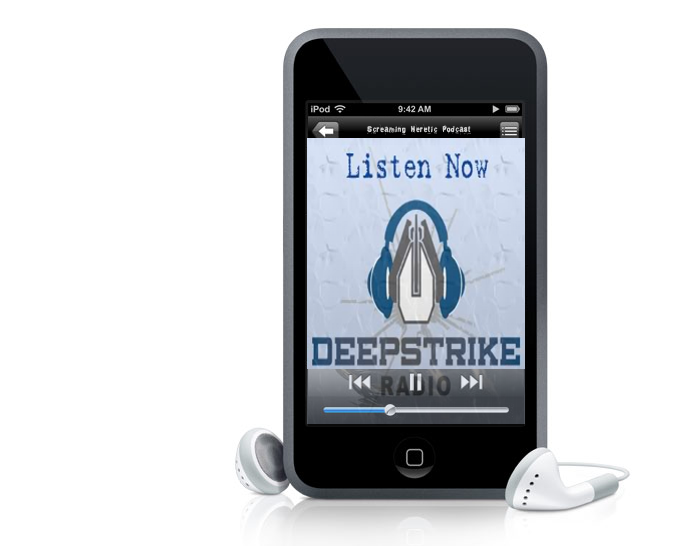 Highlights: This week, Jim is back from his unfortunate accident, and the crew is at full strength. They open up by talking about what they have been doing lately, including more Space Marine, hobby progress and Games played. They then moved on to some news and new releases. Next up began a full rundown on the Sisters of Battle, starting off with the full, in-depth history and story of the Sisters, including their origins, founding and weapons in the Librarius. Next up in the Next up in the Briefing Room, the boys give a full rundown on the Codex itself, the rules and the units contained within. Despite that most folks are calling this Codex full of fail; the guys do manage to find some highlights. Next up in “the Armoury”, each of the hosts take their shot at a Sister’s list, and Chris’ list was a bit of a power list. Each host has a pretty good sounding list, but we would have to see how well it preforms on the table. To close out the show, the boys sit down and talk painting the ladies with the Hobby Trenches! They give some tips for painting those wonderful Sisters of Battle.

Opinion: Well, it has been a long time coming, but Deepstrike Radio made my top pick this week. This is, from top to bottom, the most complete review of an army I have ever heard. They opened up great coverage of the story of the Sisters, moved into the codex and army builds for that army, and closed by talking about the model range and painting them. An outstanding show! Make me ALMOST want to play them. Great work guys!

Highlights: This week the 11th Company opens up with “This Week in Gaming” and they all made the trek to Larry’s place to game night. They talk a bit about their event and Steve’s adventures in re-thinking his Space Wolves list and how the Wolfs have taken a step down since the release of Dark Eldar and Grey Knights. They then move on to talk about the games they have been playing this week. Pat starts off by talking about his Blood Angels experience and Neil’s adventures with Grey Knights. Next up, Pat has an interview with Alex Fennel and they discuss his Deathwing Army and his and Pat’s game at the Nova Open. Alex also talked some about his ETC experience this year and how some flight delays caused problems, and his overall Nova experience. Next, Pat interviewed Damon Green, a top 50 player in the US and they talk about his all bike Space Marine army. Next up, Pat talks to Recious of the Bay Area Open, about his new upcoming event, the Comikaze GT. Next up in the Strategy Muse, the guys discuss some potential uses for the Land Raider in the modern game. They go into why they usually do not like Land Raiders, mostly due to the point cost and the overuse of Melta that brings it down all too easy. They then move on to talk about the one use that Neil has found for the Land Raider in his Grey Knights list. Next up in Tactical Terrain, they talk about the consept of terrain that shows up during the battle, in tanks that are now terrain. To close out the show the guys get back to “the List” and this week had a distinct mech Imperial Guard feel to it, and only reminded me how nasty that Codex really is.

Opinion: This was yet again another great podcast from the Myrtle Beach Wild Bunch. I can tell you, personally for me, I have been really happy to hear from Larry lately. He has been one of my favorite podcast personalities and I am glad he has been back. I loved the early discussion about altering Steve’s Wolf list to now fight Grey Knights, as I am having similar issues. Finding a good use for a Land Raider was good and the endless run of disgusting IG list just reminded me of how good that codex is. Overall, a great show guys!

Highlights: This week Steve is back and brought with him Ollie to the studio. They open up the show with some new Forgeworld releases and Dreadfleet, and moved on to talk about some of the issues the Black Library had recently. Next up the guys talked some about local Overlords news before talking about what they have been up to lately in the hobby and gaming. Next up in ‘The Meatlocker’, the boys are without Ciaran but still push on and got into Part Two of the Deployment phase. They discuss, quite in-depth I might add, what you can done each form of standard deployment and some standard tactics and strategies for each deployment. Then, in Room 40001, Ollie gives his opinions on things he would like to see removed from the game of 40K, hitting on Inquisitor Coteaz, Deathstar Armies and more. They close out the show with a “Round Table” discussion about the tournament they threw in preparation for the upcoming Throne of Skulls tournament. They each talked about the armies that they took and discuss each of their games and how well they did.

Opinion: This was a great show, it really was! I missed Ciaran, but I think it is just my ideal show to have Steve, Ciaran, and John on, plus others, preferably Dagmire. Despite that I was really happy listening to this show, the podcast known for their fluff and fun style of play really had a great tactical segment on deployment. It was awesome, nice work guys! Ollie was a good guest and the round table was just fun to listen to. Check this one out!

Highlights: This week is all about the team game on the Independent Characters. The guys open up their show with a shoutout before moving in to the Hobby Challenge, Feast of Blades, Tasty-Tastes local tournament, and the Grand Waaagh! They move on to talk about hobby progress and Carl goes in depth with his Hobby Challenge. This also includes two different sides of the Finecast spectrum, as Carl had a great experience with his latest model and Geoff did not. Next up they talked about the games they have been playing lately, which was highlighted by Geoff’s most recent tournament results at Celesticon, in which he took 1st place. They then move on to the main segment, talking about team games and team tournaments. They open up by talking about the social aspect of the team game before moving on to the different kinds of team games, either fun or competitive. They then talk about some of their experiences playing team games. Then then close out the show, but as an added bonus in Forbidden Lore, the guys take about the Black Library book Path of the Seer. Spoiler Alert, they go completely into this book exposing all of the story arc and how they parallel with Gav’s last book Path of the Warrior.

Opinion: Geoff and Carl did a great job this week talking about something near and dear to my heart, the Team Game! They really went in-depth with some fun ideas of the team game. I did find myself wanting a bit more, perhaps a full blown Team Tournament segment might be in order, as this one mostly focused on the social fun game rather than competitive. And having just finished Path of the Seer myself, it was like being in a 40K book club listening to Forbidden Lore this week. A great show, thanks guys!

Highlights: This week, Dave opens up the show with some announcements which included a tournament being thrown by the ‘Roll with it’ guys and a need for regular bloggers. Then it was on to the GT Update news, in which they announced the lodging deals that they were about to swing for the event and the point value. Next up in the Tournament Report, Dave interviews Rob ‘Showbiz’ Madely and he reports on his experience at the Cardiff Carnage Tournament he attended. He gave a rundown of the unusual COMP scoring before talking about his list and each round of his tournament. Next up in Operation Codex, this week the boys review the Black Templar army itself and how they stacked up to Deathwing Dark Angels who also got the Codex Update treatment. This week they focused on the HQ choices and some of their perks. Next up, Dave interviewed Steve from the Overlords podcast and they talked about the upcoming Overlords Double-Take tournament. This will be a 2000 point team tournament, 1000 points per side and will allow for 32 people making for 16 teams participating in the event. Steve gives some of the details about the event including army make up and special rules for the games. Dave then has some fun with Steve and asks Steve some funny fluff based questions. Next up was a favorite of mine brought back, the Match Live! This week we have Gary “the Voice” Percival playing his Grey Knights and Rob ‘Showbiz’ Madely playing his Chaos Daemons. They open up by talking about their lists and basic tactics before going into a turn by turn review of the match. The match had its swings for one side and then the other. Check it out to find out who won!

Opinion: One of the best podcast out there today flexed its tournament muscles this week with a jam packed podcast, full of 40K goodness. The interview with ‘Showbiz’ was great, the rundown of the updated Black Templar HQ units was informative, Steve from the Overlords helped to make this show a great one, and I just love the Live Matches they run. Overall, a good show I’d recommend to anyone! Good work guys!

Interesting Tactics – Episode 19 ***Explicit*** – Under New Management, Casual vs Competitive, the Venomthrope and the Emperor’s Champion! 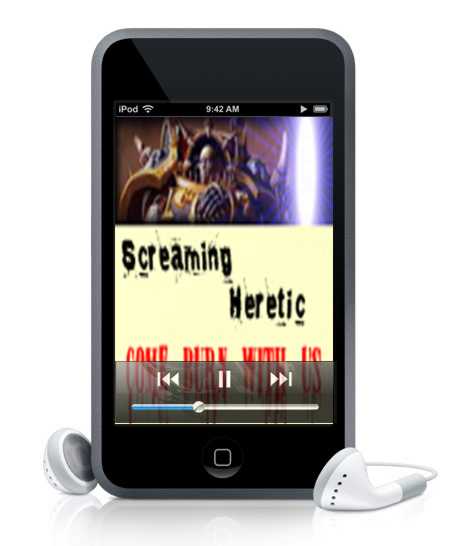