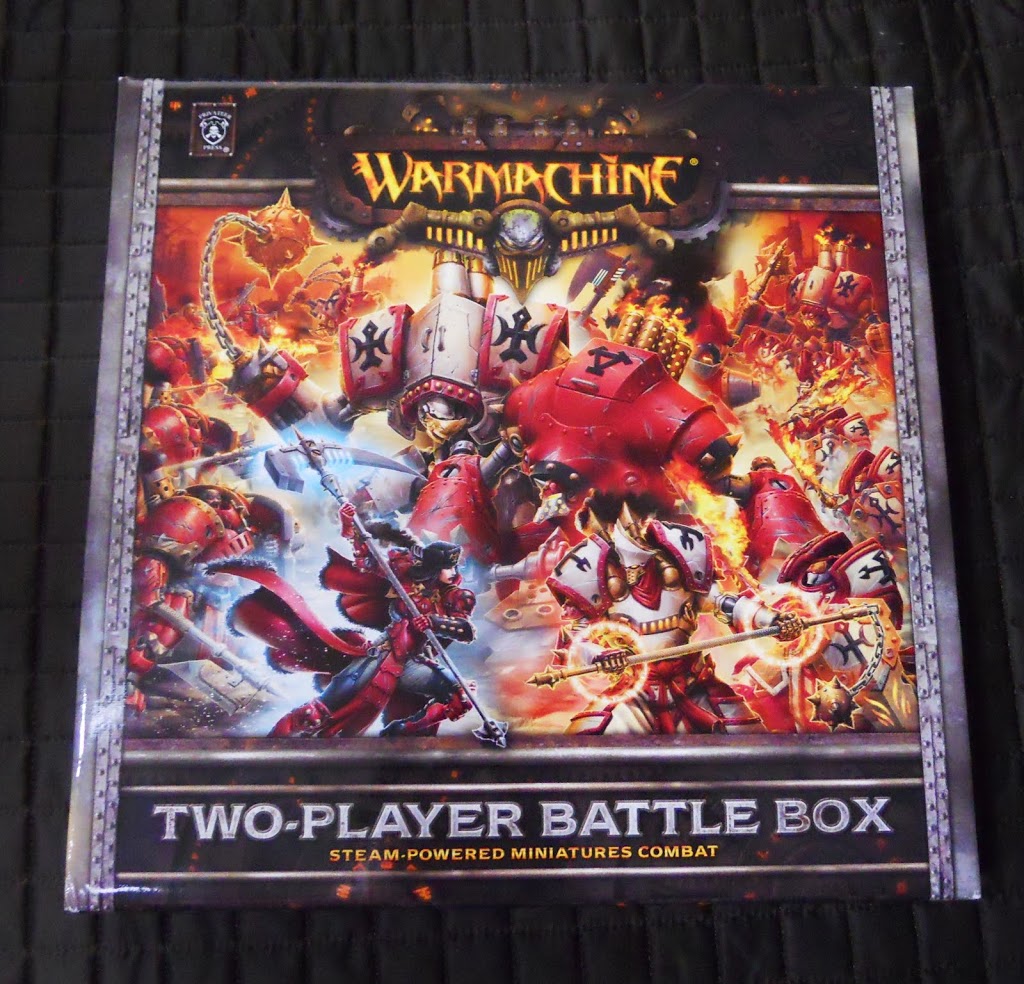 This September, what is perhaps the most important product Privateer Press has ever released will arrive on store shelves. Lets take a closer look.

The Warmachine Two-player Battlebox is sure to become an essential cornerstone of the game company’s miniature line. For $99.99 you get not only 51 points worth of minis (giving you a 20 and 21 pt army for the Empire of Khador or the Protectorate of Menoth), but also a comprehensive 86 pg. mini-rulebook, a background guide for the setting and game, dice, and a ruler. And while its not listed on the box, mine also came with a mini No Quarter magazine and a Quick-Start Rules sheet. No telling if you can expect to always see these extras, or if its just part of the first wave of sets. What all this does is make the Iron Kingdoms more accessible than ever, opening the door for miniatures gamers from other systems or people completely new to wargaming.

So its one thing to just say what comes in the box; lets see what it all looks like. This is how much stuff you’ll find inside. That’s 17 minis, 4 of which are heavy warjacks. Even if you don’t like the stock warjacks that come with this starter set, buying just one of the regular heavy warjack kits will give you the parts you need to turn it into something you do like. Its difficult to put a precise value on all the stuff that comes in this kit, since it comes packaged in a few different ways. The Khador starter will cost you $50; thats easy enough. The Protectorate half provides you with the Protectorate starter box with a Vanquisher heavy standing in for the Revenger light you would normally get. So if we want to add that up in the most conservative way possible, we can subtract the cost of the Revenger from the Battlebox and add the cost of a heavy Warjack. That puts the Protectorate half at $66. The Cinerator and Man o War units are going to run you $90 for the pair. So even without trying to figure out a value for the mini rulebook, dice, ruler, and other stuff, this box is already saving you $109 bucks. But if you wanted to get everything packaged individually all this stuff would run you $269. Again that’s not counting the rules, dice, etc. A sweet deal no matter how you slice it.

Now lets take a closer look at some of the components. I already posted pics of the Warjacks in this article and this one, so we’re going to head straight to the stuff you haven’t seen. There’s a good chance a lot of you Protectorate players own a unit of Cinerators already but they’re still worth showing off. There’s a lot of great detail to be seen in these guys, and hopefully I’ll have my own unit painted up soon so you can see how great they look with paint on them.

For me though, the really cool thing to come out of this box are the new Man o War Shocktroopers, which will be available only through the starter until the box is released at some later date (November at the earliest apparently). These guys look great. And check out the super tiny details for the Kovnik. An amazing little head, and also these cool tiny medals. It looks like every kit will come with two of them, so if you buy a couple of MoW kits that’ll give you badges left over to add some cool extra details to one of your warjacks. While the rulebook may be small, its still loaded wth detail on every full color page. And while the book will teach you to play the game, the Introduction guide sheds light on the world of the Iron Kingdoms. The factions featured in the box get the most information, but turn the page and you will find some background about all the factions fighting in Imorren; Hordes forces included. The mini No-Quarter magazine is just that. Its shorter as well as smaller, but still contains a ton of info new players will find helpful: painting and conversion articles, more background info, a peek into the community with an article on organized play, and a battle report featuring Khador vs. Trollbloods. Hopefully that last one will cut down on the number of people asking if Warmachine and Hordes are compatible. Finally the Quickstart rules printout, which may seem redundant, does offer something new players will find really useful: stat cards for two other factions. It also means both players will have at least some version of the rules to take home with them after they split up the box. ~So overall I think this is a big win for everybody. Wargaming now has three top shelf $99 starter boxes for 40k, Fantasy and now Warmachine. New players get a cheaper Warmachine entry price. Veteran players get new players to add to their community and the opportunity to buy some cheap minis if they don’t have them already. And Privateer Press gets some new blood to help grow their brand. So what does everyone else think of this new thing? And maybe most importantly… is it going to be enough to convert any of you hold-outs out there?

Author: Ben Williams
Ben Willimans is a Professional Painter and Columnist at Bell of Lost Souls. He has been involved in the hobby and art side of miniatures and the tabletop gaming industry for over 20 years. He has won multiple national painting awards.
Advertisement
Khador Menoth Miniatures Review Tabletop News Warmachine-Hordes
Advertisement