Warmachine: An Interview with Steve Garcia 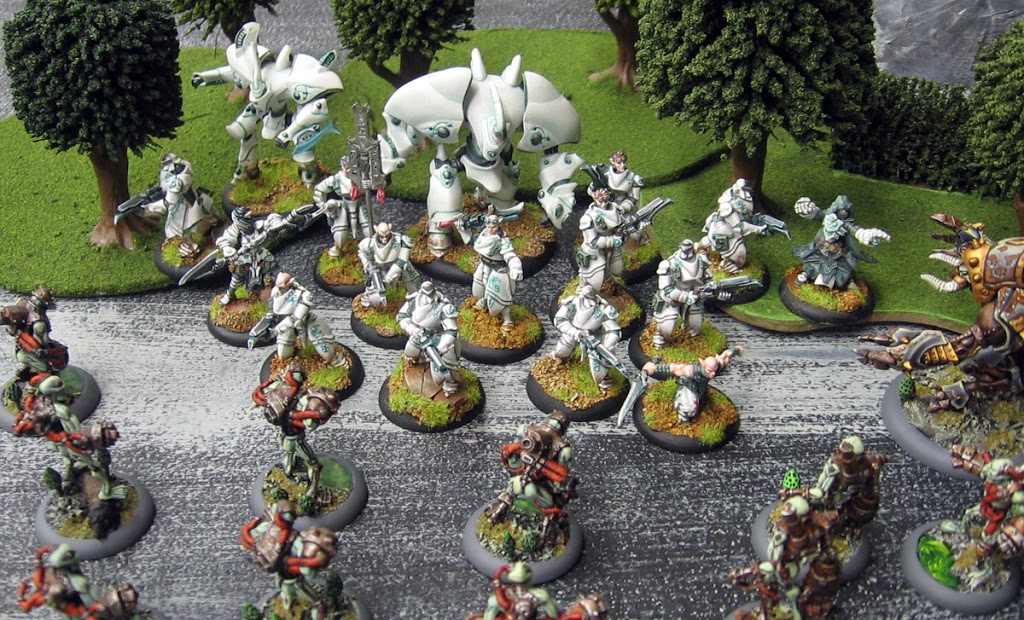 This time we’ve got an interview with Steve Garcia, winner of the 50pt Hardcore event at Lock & Load 2011.

Steve’s a PressGanger out of San Antonio, TX, and he surprised a lot of people by winning the Hardcore event at Lock & Load with his Retribution army earlier this year.  Lock & Load was a multi-day mini-convention held at Privateer Press HQ in June.  Lots of great players from around the world showed up to play Warmachine with the guys who run the company.  Why was his win surprising?  The “common internet wisdom” was that Retribution wasn’t good enough to win that sort of event.  Steve proved ’em wrong and he’s going to share some of his thoughts on how he did it.  To add to his honor roll, he also took home 1st place in the 35pt. Steamroller, and 2nd place at the 15pt. Mangled Metal event at WargamesCon 2011.

Since some of you may not be familiar with the different Warmachine tournament formats, a Steamroller is your standard tournament, normally at 35 or 50 points.  There will be multiple different scenarios, and each player has two lists he can choose from based upon the scenario and opponent.  All rounds are timed, with roughly 10 minutes per turn and 80 minutes per round at 35 points, and 12 minute turns, 100 minute rounds at 50.  Hardcore is a more….intense.  In Hardcore, all models must be fully painted, a caster-kill is the only victory condition, and games are significantly faster.  A 50 point hardcore has 7 minute player turns with 1 hour games.  The shorter time limits are the real difference, forcing players to think quickly, play quickly, make as few mistakes as possible, and capitalize on their opponents missteps’.

But enough from me.  On to the interview.

1)    How long have you been playing Warmachine/Hordes?
My name is Steve Garcia, a local PG of San Antonio, TX. I recently won the 35 point Steamroller at WargamesCon in Austin, TX and Hardcore at Lock & Load this year in Seattle, WA. I’ve been playing Warmachine now for 3 years out of Dragons Lair San Antonio, I started with 40k and was drawn away by the beautiful sculpts that PP produces for their game systems.

2)    There are literally thousands of different combinations of casters and units to prepare for.  How do you go about prepping for a big tournament where anything could hit the table?
I start by choosing one the three factions I play, Cygnar, Circle and Retribution. I’d like to say I choose based on tactical options or power lists but I usually go with whichever one I haven’t played in awhile with the exception of Hardcore events. Retribution is my most painted army so it gives me room to actually go through my event prep without having to use all my time painting or let that dictate what’s actually going to make the list…I should probably have more painted as a PressGanger but running events at the LGS and work take up my prime time painting.

So after I settle on a faction, I create between four and five lists to play test about a month and half out. I’m lucky enough to live within two hours of five great gaming stores so play-testing in a tournament setting is pretty easy. From my initial lists I decide which ones I feel most confident with and drop the rest based on the event format and….then I repeat this process with my “final” lists, making changes were required based on my thoughts on specific scenarios, faction matchups etc. I also ask my opponents what they thought of my list, what they saw as the primary threat, what they weren’t worried about, how I set up, the bad matchups they saw from their armies perspective etc.  The most valuable info I get in this way is from my brother Sam, and my boy, Jay. I can count on them giving me 100% no BS feedback on every model in my army regardless of a total massacre, drawn out slug fest or scenario win in our games. From total composition, to a perceived underuse of one specific solo, I get awesome feedback and a good time to boot.

3)    How does prepping for the Lock & Load Hardcore tournament format differ from prepping for your standard steamroller tournament at the LGS?  How does it influence your lists and tactics?
With all the stores in the vicinity, I get a good spread of all the tournament formats so from tournament and local prep, it doesn’t change a whole lot. It’s a little more relaxed, especially after the larger events. I don’t really change the way I play from format to format, if anything I develop better gaming habits after events from the experience. For example, clearly stating my intentions, not trying to take back a movement after you’ve declared a model is activating but then realizing you just messed up your order of operation, not assuming your opponent sees the cover or back strike bonus you may or may not have before moving a model etc. In the local events these kinds of things are a little more forgiving but I try to play like I would in a more serious format just to develop better habits and to lead by example. If my opponent does the same great, if not I know I’m not shamming on my gaming edict. The local events are also great opportunities to try out new casters, combos or a tier list I’ve been waiting to use.

A lot of this list was dictated on how much I had painted for the Hardcore requirement but regardless Rahn is awesome. He’s got “something for everything”, slams, AOEs against infantry heavy lists (even more sick with Sylys Wyshnalyrr, the Seeker), protection against melee oriented models with polarity shield. The ability to move your opponents models around on the table in your own turn is probably his greatest asset IMO, from assassination to scenario it lets you set the pace of the game….switching over to straight murder mode on feat turn isn’t a weakness either. With Rahn of course comes the arc nodes, I’ve seen a lot of players favor the Chimera to allow for more points to be fit in their lists but with combustion, reach, halo cannon and the single hardest base melee output (+3 STR and combo strike don’t count:), the versatility of the Phoenix made it an easy decision to include two.  I included a Manticore mainly to balance out the range game in my list and to capitalize on Rahn’s huge knockdown range with the Phoenix combined with his already impressive melee output. A Magister and battle mages were again easy as well to maximize his feat and move around the table for scenario options, and to put models in the ideal position for the hard hitting Dawnguard Sentinels. Three assassin solos to prowl the outskirts of the table or right down the caster/locks throat and two Arcanists for the extra melee output and focus finished the option heavy list I wanted. Overall, the versatility of the combined arms Retribution faction is what draws me to it so much, the sweet looking models are just icing on the cake.


5)    What was your toughest game during the tournament?  Why?
The two Protectorate armies I faced were the biggest challenge due to the choir, with my closest match coming down to points. Against pKreoss I had to wave my Manticore in the middle of the table to draw out his jacks and the Choirs +2/+2 attack/damage chant instead of no magic, opening up Rahn and mages to maneuver them into my Sentinels in the following turn. With the heavier hitters down, it was just an advancing line of Dawnguard backed up by the Assassins but it took four rounds to get that Choir to quit singing that tune.

pSevarius went almost identically (including their list makeup) and had the Errants on top of that to pick off my Sentinels slowly….a huge shallow water terrain piece kept my sentinels at bay for quite a few turns. At that point my Manitcore and two Phoenix’s just retaliated from the other side till I put one of them out for the Avatar to come after, again luring the Choir into +2/+2 chant instead of no magic. Rahn popped his feat, opened a lane and the Magister used whip snap to bring the Mage Hunter Assassin into charge range of Sevvy, ending the game. These two games stick out in my head but overall, I was lucky enough to play some awesome opponents who made the game fun and challenged the hell outta me.

6)    Any future plans (new faction?  New casters?  Did you go to gencon? Etc….)?
No GENCON for me unfortunately, it sounded like tough competition up there. I’m prepping for the Warmachine Weekend Invitational and bouncing back and forth between Cygnar and Retribution for the event. It’s a battle of what I’m more used to playing and feel stronger in vs. the faction many think is no good in the meta…decisions, decisions. I’ve been using Garryth and Ossyan a lot lately to expand my comfort zone with the faction. The fluff of Garryth is really fun and Ossyan just delivers some hurt on the table….we’ll see. Overall, the experience is what excites me the most and meeting new people who have such a love for the game and its world. If you’re ever able to attend one of Privateer Press’s events, you won’t be disappointed in the surroundings. Thanks for the opportunity to talk with your fans. Good gaming to all.

There you have it folks!  If you’ve got more questions for him, I’m sure we can get Steve to come on and respond. 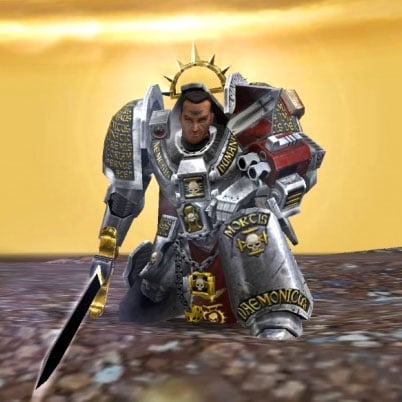