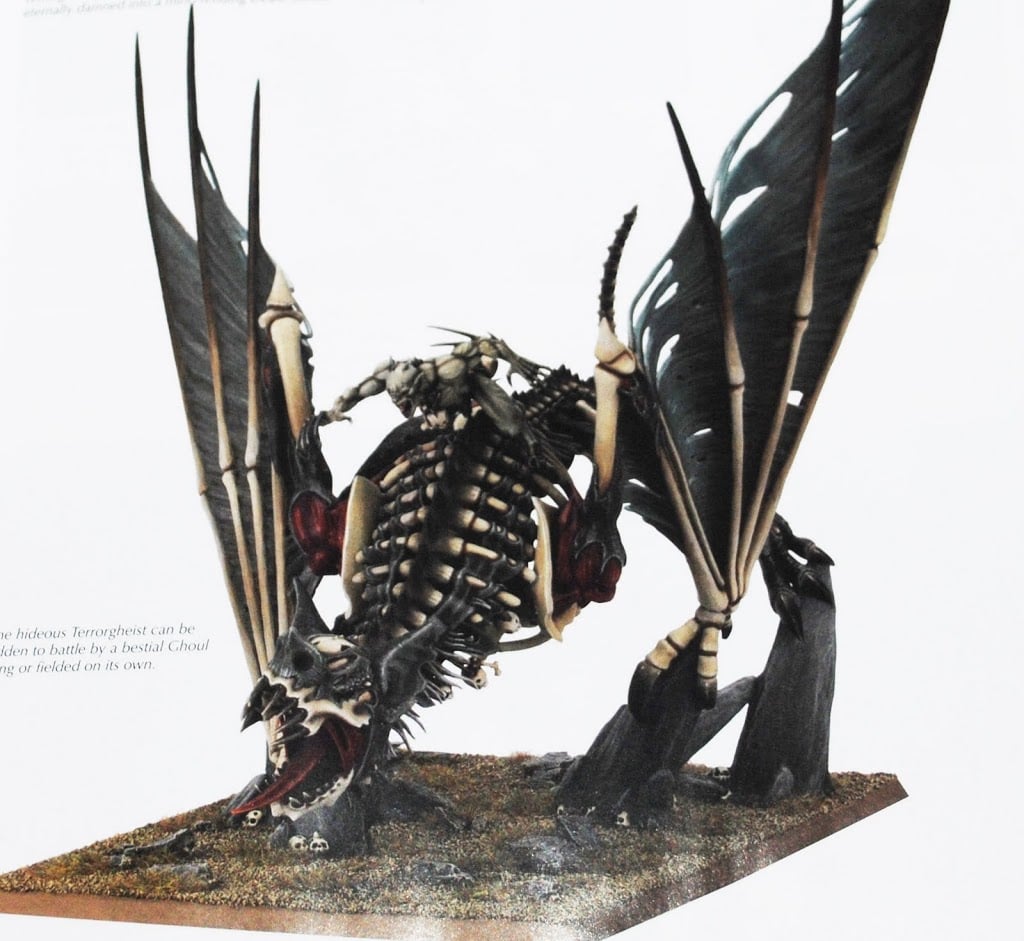 Hello World!
Yes, it has been a while since we last spoke, but I’ve been dead the last few months and only the new Vampire Counts models can awaken me! In the coming weeks we’ll be talking more about those lovable deadbeats the Vampire Counts and how these new models affect us. But, for now, let us get right into the meat of this White Dwarf update, the Terrorgheist!

The Terrorgheist is a completely new model that I am just dying (more Vampire Counts puns to come) to use. So, without any further gilding the lily, let us look at his stats.

… It reeks of ammonia and mildew. … It is gargantuan and dead. Black skin slides loosely from ragged holes torn in its body. A skeletal frame emerges from most of its surface. He tries to stand but suddenly a siren stops him. Like ten thousand screaming crows, the noise is the last thing he ever hears. Blood runs from his ears and eyes as both burst. In agony and nausea he collapses. But not dead. … With a heavy gust of wind, the monster takes to the air, scoops him up in its clawed feet, and disappears into the night.

Rules-
The Terrorgheist is a Monster that can be taken as a mount for lord but otherwise counts as a Rare Choice.

Cost – Well we can’t tell you that, but he’s not overly expensive, let us just say he is more than a Varghulf but less than a unit of Blood Knights.

To resolve a Death Shriek, roll 2D6 and add the number of Wounds the Terrorgheist has left.  For each point by which this score exceeds the target unit’s Leadership, the target suffers 1 wound with no armor saves allowed. A Death Shriek is a magical attack and wounds suffered from it are distributed as if from shooting.

Upgrades –
Infested: When the Terrorgheist dies, he immediately makes 3d6 Strength 2 hits to all units in base contact.

So there he is in all his glory. Let us discuss.
Stats-
True to vampire form, the Terrorgheist has a relatively low Initiative of 3 as well as a low Leadership of 4 and Weapon Skill of 3. He’s no Shaggoth to be sure, but who can really fault him for these stats? He’s an undead bat monster! These stats are not great but he makes up for them with T6 and W6 with a 6+ Regen. Now 6+ isn’t great either but consider that many monsters in this game don’t often get much better than a 4+ armor save which will probably almost always be negated since they usually get hit by stuff much stronger then Strength 3. The 6+ regen is a save he will at least almost always get. Finally, he has S5 and A4. He’s got a nice solid strength, perfect for killing infantry, but only four attacks. At first glance this may seem disappointing but remember he has D6 thunderstomp attacks and best of all his Death Shriek.
Abilities-
Death Shriek is pretty fantastic, couple this with flying and you can easily swing up to an enemy unit and lay into them pretty effectively. Even if you charge you get this attack in the shooting phase, giving you a chance to soften up the enemy before any attacks take place. This ability ignores armor saves and can max out at 2D6 + 6 versus leadership. To me, this looks like the perfect knight killing machine. This is perhaps the best part of the monster. His straight up attack profile isn’t great for his cost, but add this ability and he is well worth his points. The best part is that, unlike the Zombie Dragon, he doesn’t have to be taken as a mount. Instead, you can have him in your rare selection giving him a much added boost of functionality.

Upgrades –
Infested and Rancid Maw are fairly cheap upgrades. Neither is terribly necessary but I personally like the Infested upgrade. Since his leadership attack is so good against low model count units when he is killed by one he has a good chance of killing them back with his 3D6 attacks. Maw is good for the reason that poison attacks are good, but I can’t say with any really feeling that poison attacks are a must. I’d probably take them for their point cost.

Usefulness-
So where does this beast fit in our army? It’s best to compare him to the rare choices that are most similar. Because he flies he fits in with the flank charging role that the Blood Knights and Varghulf share. The Terrorgheist certainly has enough killing power to be classed with his competition but he lacks the survivability they have as well. So what are getting for the extra points he costs? Well the answer is clear; it’s his special ability Death Shriek that is what makes him worth taking. But, it’s not just because of how lethal it is. No, the true power it has is in when it is used. Death Shriek is used in the shooting phase, which as we all know occurs before the combat phase. This is huge for our army. Death Shriek is a devastating attack that we get to make before combat even begins. We now have a serious edge over other powerful units that almost always strike before we do. The essence of Vampire Counts is winning through attrition. With next to no armor to really speak of, we only win when we have too much for our enemies to kill. But being able to deal a massive blow before combat leaves us with more bodies for combat and not just using them as ablative wounds.

The Terrorgheist is very well done model, I know some people don’t like his head but that is personal preference. Where rules are concerned, this model will be a great compliment to our Rare selection and I think we are going to see some great things from Death Shriek. How about you all? How do the rest of the restless dead feel?
Advertisement 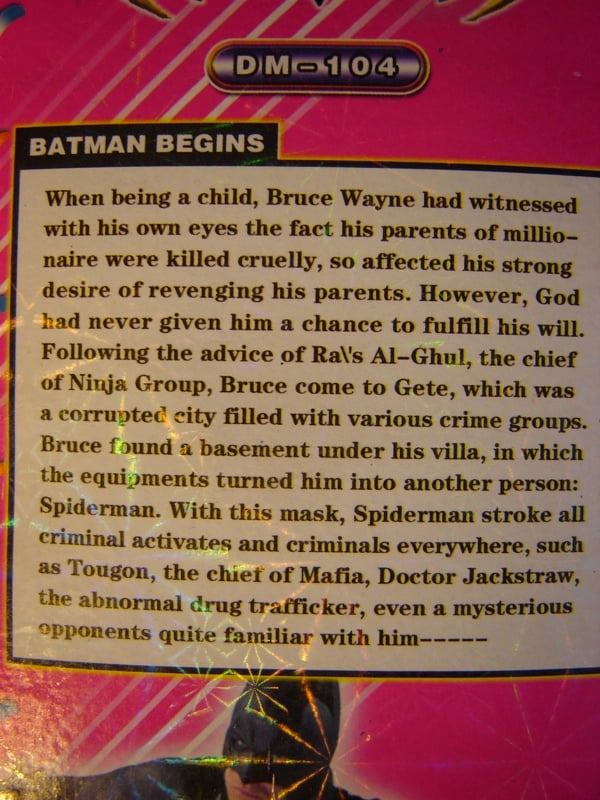