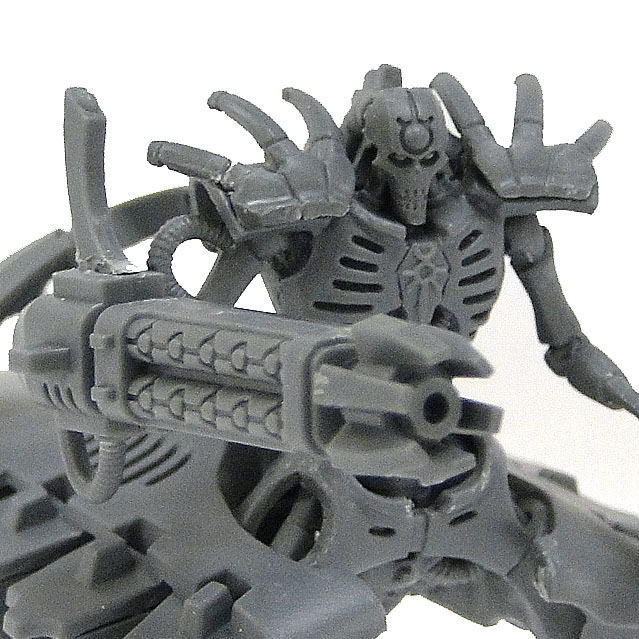 Hey guys. MBG here with another one of my Necron conversions! Today I have the Ankh Pattern Destroyer.

I hope you have enjoyed the ones I’ve done, they were really fun to make so far.

I dunno about you, but there is something about the tin can mans, then just gets the creative juices going for me.

I call it the Ankh mostly because of the curved airfoil on the back that helps balance out the model some. I think it makes the Destroyer look more up to date with the new figures, and since it’s rounded it seems to flow nicely with the older model’s components.

Below is how I made it and the components used, with links back to the Spikey Bits Store so you can see the parts.

So basically this is two separate conversions, one for the Gauss Cannon and Heavy Gauss Cannon respectively.  To start, just assemble your Destroyer kit per normal, but do not attach the weapon arm to the provided weapon. At this point I cut the “nub” flat and attached a magnet to hold both weapons.  Probably unnecessary unless you want to swap them out for the three Heavy Gauss Cannons you *can* take in a Destroyer squad. Then I took the Lychguard jump packs, cut them one down as shown and added the halves the the shoulders of the Destroyer. For the regular Gauss blaster I just used it straight from the Command barge kit. I added a little spoiler bit to it from I think the other pilot harness I had lying around (from my Cryptek conversion). To make the Heavy Gauss Cannon, I just took the right handed half, and magnetized the hole where it normally attaches to the other half of the gun. Problem is that when you put it on the Destroyer body, it gets a little front heavy. So to alleviate this I took the top “spine” piece (in red) and glued it onto the gun so it locks into the wire (in green) on his arm.

I think the changes definitely added a little character into a Ten-ish year old model kit. Please comment with how you think it looks 😀

Check out the Three Sixty below. Author: Robert B
Robert is a veteran tabletop and miniatures gamer, and writer with over 20 years of experience. His specialtiesies are the worlds of Game's Workshop's Warhammer. He began writing for BoLS In 2010.
Advertisement
Conversions Necrons Warhammer 40k
Advertisement