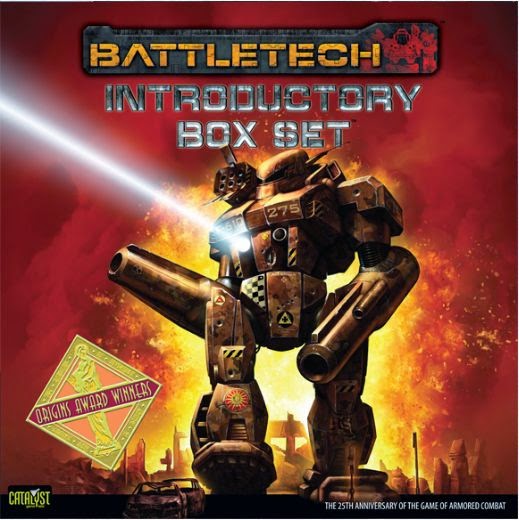 Hey, y’all, Voices here with another gem for thought on BattleTech. Since we’ve been doing mostly product reviews, I thought a series of articles for the absolute beginner might be nice.

At least, I hope that the prior articles have inspired some of you who’ve never played to give it a go…

Previously, we’ve covered on this site various products and taken you on a (very) brief whistlestop tour of the Inner Sphere. But so far, we haven’t really told you what exactly you need for play. So here it is, the list of must-haves to play BattleTech.

This box was covered several months back. It’s got some twenty-some-odd ‘Mech models in it molded from injection plastic, an introductory rulebook, record sheets for the ‘Mechs it includes, and maps. It also has other things, but all the above will be necessary or close to for play for beginners. This is the foundation rulebook. Everything in the game either builds up or tears down from this. This book is absolutely necessary for the rules of the game, and cover ‘Mechs, vehicles, infantry, and aerospace warfare. It also has a brief section at the back on painting and terrain, which is nice but not strictly necessary. Also includes such fun weird things as the Clans’ zellbrigen rules-of-engagement.

You need record sheets for your force. One per ‘Mech, vehicle, infantry squad, aerospace fighter, DropShip, JumpShip, WarShip, or whatever unit type you have in your game. There are a multitude of ways to get these, from the record sheet books published in Dead Tree Edition by Catalyst, to the full-on pdf versions direct from them, to the Heavy Metal series of programs, to even freeware programs out there. Solaris Skunk Works is one that increasingly pops up. Alternatively, if you’re a sucker for punishment, you could run a few copies of the blank record sheet in the back of TechManual, Tactical Operations, or Strategic Operations and then take the time to fill it out yourself. You need a map to play on. While there are miniature rules for BattleTech, the way terrain is far more fully expanded in this game than 40K or WarmaHordes means that you’ll need a lot of very specifically-made terrain for it; so the folding paper (or cardstock) maps are most advisable. Though many of them are no longer in publication, a hunt around the internet should pop them up second-hand. Miniatures. Arguably the reason everyone reading this article (and coming to this site) is doing so. The plastic minis in the 25th Anni boxed set are decent enough, but the formal producer of white metal BattleTech miniatures is Iron Wind Metals; and they’re updating most of the older models to newer sculpts than the old ones that have been around since the game’s inception. The mini above is the current sculpt of what is probably the single most iconic machine in BattleTech: the Clans’ fearsome 75-ton Mad Cat (or Timber Wolf, if you’re a purist) heavy OmniMech. Currently, ‘Mechs and other minis are produced in roughly 1/275th scale or thereabouts, though the scale is (slowly) creeping up. Some minis have issues with footprint sizing, being too large to comfortably fit on a hex base. And almost none of them come with hex bases, which isn’t strictly necessary outside of tabletop (and yes, there is a complete set of tabletop rules) but nice to have. If you got the 25th Anni set (above), it comes with a good collection of basic plastic minis.

Well, that’s it for the basics. Over the next few weeks, I’ll be doing an overview series on Total Warfare and the line of hardback rulebooks; but for the moment, here’re the titles of the hardbacks:

Additionally, there’s a final book out there being worked on. Interstellar Operations is supposed to be the book for conquering stellar empires…

And with that, I’ve little more to say on this. Look forward to the BattleTech Overview articles and tactica! This is All Voices Anonymous, signing off. 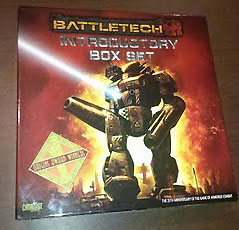